Should parents be allowed to smack their children?

The law currently allows parents to smack their child with an open hand, providing it leaves no visible mark. This means that children may not be hit with and object (such as a slipper) or a fist.

Don't use plagiarized sources. Get your custom essay on
“ Should parents be allowed to smack their children? ”
Get custom paper
NEW! smart matching with writer

To protect children, only their parents are allowed to smack them although parents may chose to give childminders permission. Smacking is considered abuse if the two conditions are not met, for example if bruises form or a parent kicks their child.

For Smacking – the Christian Institute

The Christian Institute get their views on smacking from the bible. As Christians, this holy book is at the centre of their faith; its contents are considered by them to be the authoritative guide on how to live.

However the bible can be interpreted in many different ways; the opinions of other Christians may differ significantly.

The bible says “parents have the responsibility for raising children”. The Christian Institute says it also tells fathers to discipline their children and the bible accepts this can cause pain. This is support for smacking. The Institute emphasise the idea that parents are performing ‘loving discipline’ by administering ‘loving smacks’. They see smacking as a positive action, attempting to improve a child’s behaviour – doing what is best for the child.

This viewpoint is backed up by the public: 88% of people in the UK say it is ‘sometimes necessary to smack a child’. Pro-smacking campaigners point to figures from Sweden where after banning smacking, assaults by relatives against young children increased by 489%.

Against Smacking – charity ‘Children are Unbeatable’

Children are Unbeatable are opposed to all smacking. They believe children should have equal rights to adults and that smacking is essentially assault disguised as punishment. They view smacking to be ‘unsafe’, suggesting parents will forget where to stop and cause unnecessary harm to their children.

In 2004 the MORI Social Affairs Institute found 71% of British people supported a change in law, to give children equal protection.

Both groups have clearly biased views. They are attempting to convince people to see their point of view so ignore key points from the opposition view and include only statistics their view.

Suggestions from Children are Unbeatable that the Methodist and United Reformed churches are anti-smacking greatly undermines and contradicts the Christian Institute’s interpretation of the bible.

Children are Unbeatable use emotive terms such a “hit”, which at first glance exaggerate what is permissible under law.

The statistics both sources quote contradict each other. It seems very unlikely that 88% of people believe it to be ‘sometimes necessary to smack a child’ and also 71% believe in equal protection. This would mean at 59% of people believe both. The surveys cannot both be representative of the UK population, or perhaps are outdated.

Members of the two groups may see things different ways because of their backgrounds. For example Christian Institute members may come from “model families” whereas Children are Unbeatable sympathisers may have been abused as children themselves, or seen abuse amongst their friends.

I believe smacking should remain legal. However, I don’t think parents are aware of what is permitted by UK law, and the government should seek to educate parents on this.

I grew up in a Christian family which believed in smacking, and although used sparingly, I think it positively influenced me. However on the other hand, I have seen amongst my friends the disastrous consequences of ‘over-smacking’ – it can be deeply upsetting.

As a Christian, the Christian Institute article did well to ‘keep me on their side’, especially the quoting of the bible. But the other also alerted me to the human rights issues which I also see as very important. Overall, however, neither article convinced me to significantly change my view.

A change in the law would make a parents life harder if they needed a way to dissuade their child from any activity or to give punishment.

Social workers and police would have a far easier job identifying whether or not parents were breaking the law. However often it would mean accepting a child’s word against their parent’s, it would provide many tricky cases for magistrates and juries. Enforcing the law would be very difficult; children would have to be confident to tell on their parents.

But ultimately the most important thing is would it benefit children? Some of those who suffer from abuse currently probably would benefit, although the majority would not. But a change in law would make it very difficult for parents when dealing with infants that you can’t reason with and would result in less mature children.

Should parents be allowed to smack their children?. (2020, Jun 02). Retrieved from https://studymoose.com/parents-allowed-smack-children-new-essay 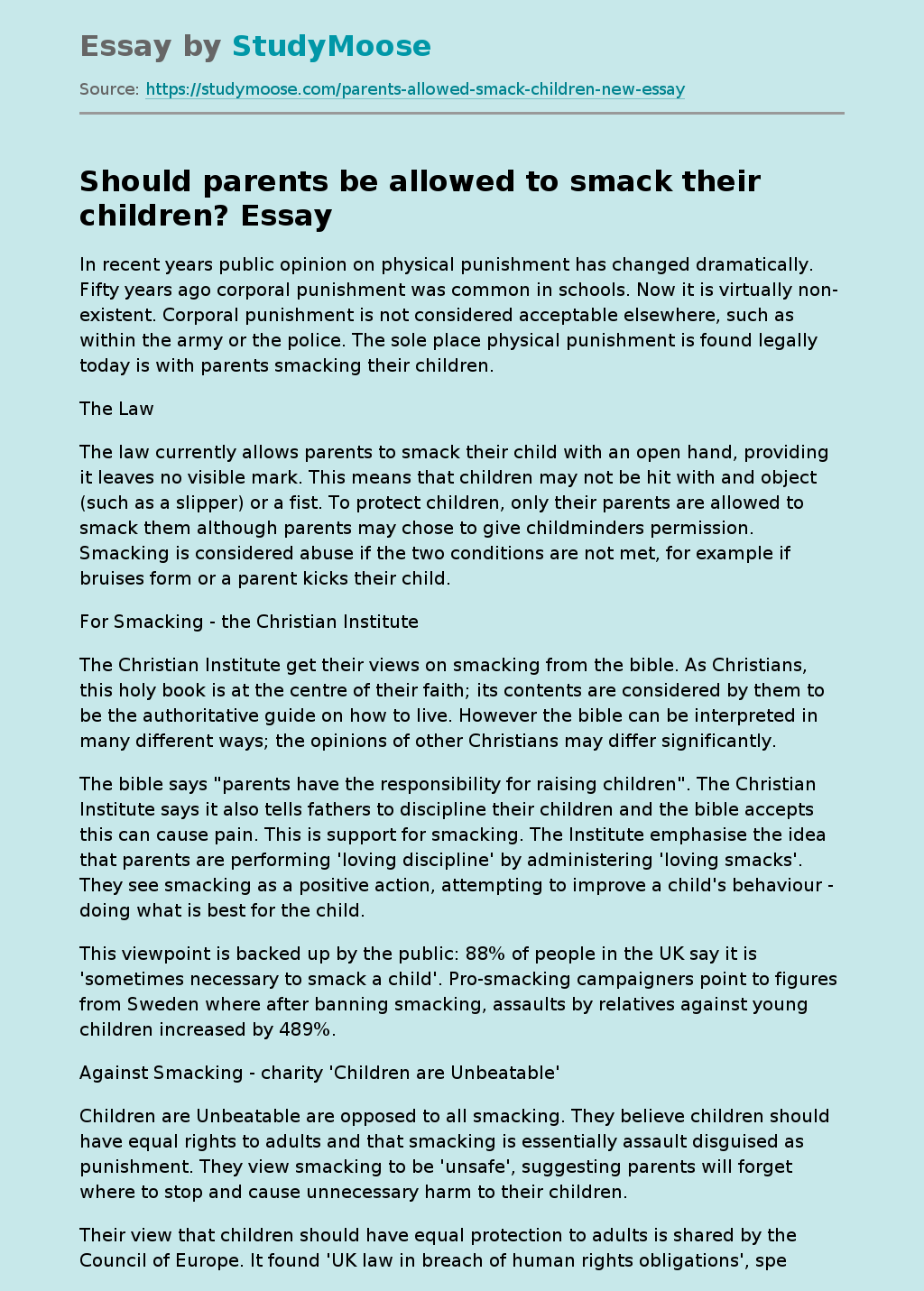