Cell phones should not be allowed in schools

Every teacher has at least one student in their class who is always on their cellular phone, regardless of the classroom rules. Should students be permitted to use their phones within the learning environment? Personally, I believe that phones are harmful devices that have a negative impact on the classroom.

Technology can be a very useful tool in the learning environment. To begin, students can use their cell phones to stay organized by using the agenda and note applications. They can input their test and assignment dates, make notes and set reminders directly into the device that they carry everywhere.

Don't use plagiarized sources. Get your custom essay on
“ Cell phones should not be allowed in schools ”
Get custom paper
NEW! smart matching with writer

Also, students claim that listening to music while doing work improves their focus, assisting them in their learning. Finally, students often prefer to keep their phones on their person as they feel anxious about leaving them in their lockers, or having them collected by teachers at the beginning of class, fearful that they could be lost or stolen.

However, phones in the classroom result in more problems than benefits.

Proficient in: Behavior In The Classroom

Firstly, when students use their cell phones as agendas, it is very easy for them to become sidetracked. Since the students at St. James are fortunate enough to receive a physical agenda at the beginning of each year at no cost, there is no reason to risk this unnecessary distraction. Also, listening to music actually distracts students from thoughtful work. There is always a periodic need to change the song or pause the music, resulting in students spending more time on their phones and less time on their work.

Finally, during emergencies such as tornado drills or lockdowns, phones can actually represent a significant safety risk. Instead of focusing on the instructions and procedures provided by the teacher, students might start communicating with friends using their phones. Worst of all, if a phone were to make noise during a lockdown, the results could be tragic.

Most significantly, the constant notifications from social media and texting represent an irresistible distraction to students. Within a seventy-five minute class, a student could potentially receive hundreds of social media notifications from their peers. If students then respond to any number of these texts, tweets or snapchats, this could result in perpetuating distractions throughout high school. Students will feel pressured to answer texts, causing them to be on their phones, distracting them from their school work. In addition, social media applications such as Snapchat, Instagram, and Twitter can result in cyber bullying which is not only distracting but hurtful. The risk of having cellular devices in the classroom goes beyond simply distracting students from their academic work, but can actually be harmful to their well-being.

Though technology can be a valuable learning tool in the classroom, cellular phones do not represent a good choice. With their built-in applications as well as social media, cell phones represent a source of unlimited distractions which is why I leave my phone in my locker or put it in the phone bucket at the beginning of class. Remember, not having a phone in the classroom allows for a focused learning experience and fewer distractions for everyone.

A student with a cell phone is an uninterested student, one with a short attention span who cares more about socializing than education. When I was teaching, all too often I turned around from writing something on the blackboard to find students text-messaging or otherwise playing with their phones. Come the end of the term, a handful of students would fail the class and far too many would drop out of school. The onus for failure should be placed on distractions in the classroom, specifically cell phones. Parents think of cell phones as a connection to their children in an emergency. But I wonder what the last situation was that genuinely called for an immediate phone call to a child. In most cases, contacting the hospital or the police would seem more urgent. And parents can always call the school’s main office to reach their children. Cell phones are status symbols for teenagers because when their phone rings while the teacher is talking, everyone laughs. Because playing video games on their cell makes them look cool. Because text messaging their friend in the next room is more fun than learning about topic sentences. So is listening to the new Three 6 Mafia song they just downloaded onto their cell. And saying students can store their phones in the locker is a joke. If they have cell phones, they’re going to bring them to class. —Jesse Scaccia

Former English teacher, Franklin D. Roosevelt High School, Brooklyn, N.Y. NO
Schools make rules to facilitate a quality education in a respectful and safe environment. Cell phones are a distraction in classrooms and have no place there. I support rules banning their use—by students and staff—in the classroom. But cell phones should not be banned from students’ possession entirely, because that is, in effect, not allowing students to have cell phones while traveling to and from school. My children’s time before school and after should not be under the school’s control. Making sure my children have cell phones and can contact me during those times is my right as a parent. It’s not just about safety or reassurance.

Yes, I want my kids to call each morning when they arrive at school and each afternoon when they leave, and there are so few pay phones anymore on which to do that. But my children’s lives are also enriched by the freedom to travel to a variety of extracurricular activities or social engagements without an adult chaperone. That is only possible because an adult is just a phone call away. If my children are not allowed to keep their cell phones during the school day—off and in their backpacks or lockers—the school system is governing my parenting and my children’s behavior during non-school time. The school has no such right. Besides, teachers should be teaching, not spending precious time tagging and bagging confiscated electronics. I trust my kids to make responsible and respectful choices, and I trust their teachers and administrators to do the same. —Elizabeth Lorris Ritter

Allowing cellphones to school would be equivalent to giving an open invitation to distraction. This is because with so many activities in a single gadget, students are bound to be tempted to indulge in them, hence deviating from the main objective of coming to school. Their concentration towards studies would deteriorate as they would be busy fiddling with their cellphones. Teachers would also get distracted, as it is likely that the cellphones will ring during class, destroying the tempo of the entire class. Not only this, with a cellphone in everyone’s hands, there would naturally be unhealthy competition to see who has got the latest model and the hottest brand. This would only increase the worries and expenditure of parents as every student would pester their parents to buy them new cellphones. Also it would make students with not so latest cellphones be a victim of inferiority complex. Worse still, it may also create a barrier or ‘cellphone-fuelled class difference’ between students as cellphones models and brands are now considered a status symbol. Bringing cellphones to school would also pave way for theft. With expensive cellphones in every other person’s bag, anyone could steal a cellphone, disrupting discipline and making school a very unsafe place.

Many people argue that a cellphone allows parents to stay in touch with their children and remain informed about their whereabouts and anything that they need to. This, however, is also possible without a cellphone, as schools have phones and any important information can be conveyed through it. Cellphones can be seen as a means employed by students for cheating during examinations. They can simply text anyone and ask for assistance. Not only this, it can give rise to after school gang activities and be misused in many ways, like making prank calls just for fun. This can lead to serious consequences and cause unnecessary panic as well as waste time. The aforementioned points clearly establish the fact that the reasons for not allowing cellphones in schools are based on clear reservations and not on flimsy grounds, hence cellphones should not be allowed at schools.

In recent times, the number of people owning mobile phones has increased dramatically. Now mobile phones are not just for calling, but you can now text, take and send pictures, record videos, access the internet, play games and much more. The variety of functions has increased dramatically. They have also become a lot cheaper. Thus more and more young people now own a mobile. So should they be allowed to bring them to school?

Mobile phones can cause a distraction in education. They can disturb teachers and students. For example, if you were working hard on a piece of work, concentrating hard, and a person’s phone rings, it disrupts the whole class. You may become side-tracked or the teacher may be interrupted during speaking to the class. Thus teaching would be constantly disrupted if this kept happening. Thus education standards would deteriorate. Looking then at long term effects, if this was happening every day, you would be wasting five minutes a day, so nearly half an hour a week, and so that would be over ten hours a year of disruption. Also, mobile phones provide a large temptation to cheat in tests. They can communicate to almost anywhere and anyone in the world. Because they are small, students can quietly and discreetly send a text and it can go unnoticed. You got to school to learn, not to waste time playing games or cheating in tests.

Research has proven that frequent use of a mobile phone can put the owner at risk of long term health damage. Mobile phones have radiation in them which they send out which can destroy or damage cells. Thus a student who uses a mobile phone regularly is at risk of health damage. With the increase in ownership of mobiles, there is increased usage and so the students are putting themselves at risk more and more of health damage. Also younger students may not be properly educated on phone usage. Most phones nowadays have internet access on them.

Cell phones should not be allowed in schools. (2016, Apr 07). Retrieved from https://studymoose.com/cell-phones-should-not-be-allowed-in-schools-essay 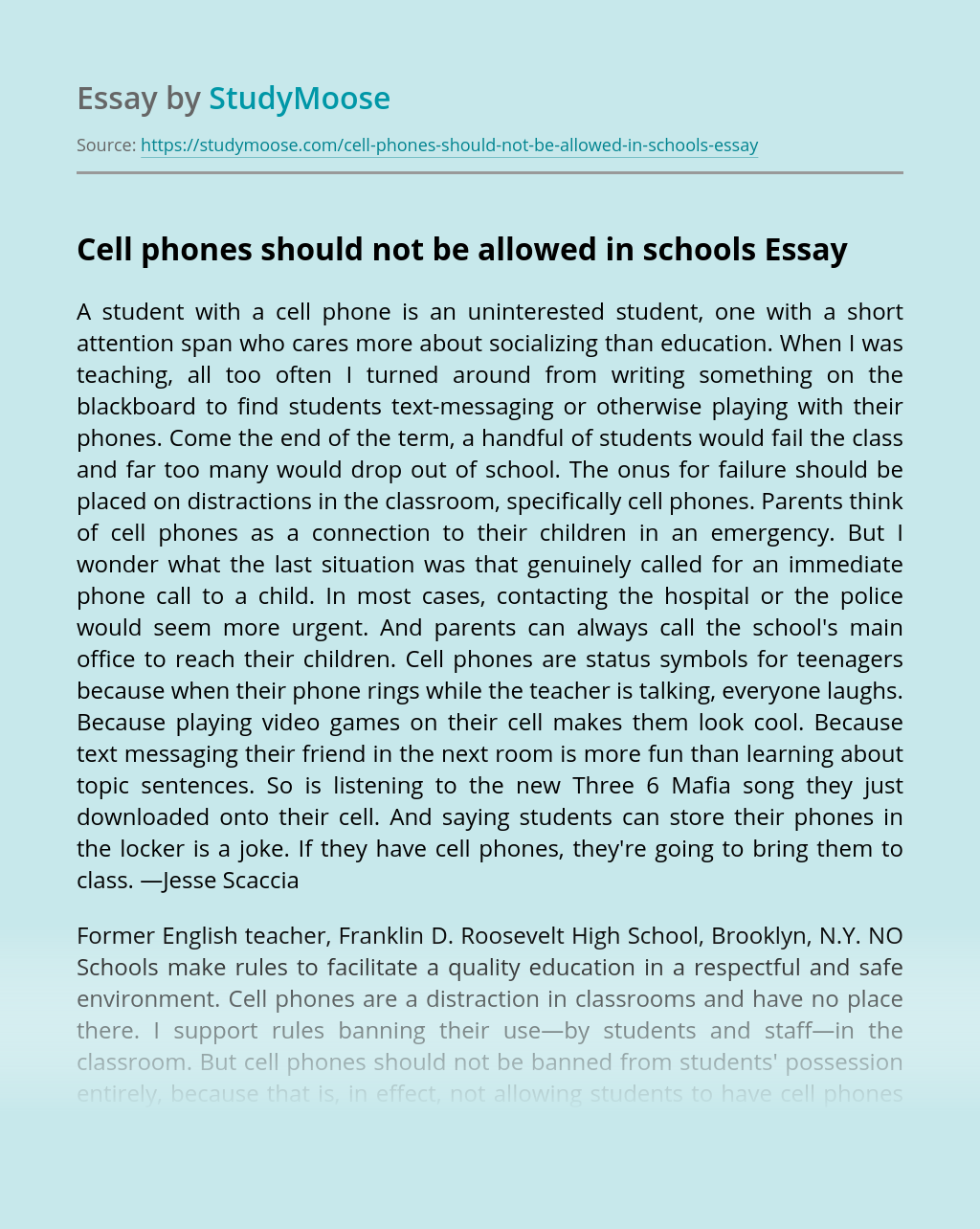