Cell Phones are dangerous
Cell phones have consistently evolved both in function and design ever since Dr.Martin Cooper first invented the wireless handset in 1973. In those days, cell phones were merely used to make calls and store numbers. Contemporarily, the cell phone has evolved into a multifunction device with heterogeneous functions added including video camera, text messenger and so forth. As a result, this has changed in the way people use the cell phone. Despite all the obvious benefits these functions provide, this essay aims to argue that cell phones are dangerous specifically on crimes, distractions and health threats.

Don't use plagiarized sources. Get your custom essay on
“ Cell Phones are Dangerous ”
Get custom paper
NEW! smart matching with writer

Firstly, cell phones are easily used as crime devices as they are very mobile friendly. This however, caused some individuals to misuse it in conducting personal and intrusive crimes. In 2012, ABC News reported a teenager caught brazenly slipping his cell phone camera under a woman’s skirt capturing a video. It is reasonable to argue that voyeurisms can be conducted using actual hidden cameras.

They have become a regular part of criminal investigations because they are now owned by most people and provide information about a person’s whereabouts and contacts. The police these days often encourage citizens to use their cell phones to report crimes and send in tips (South Source,n.d). This, as Sue (2013) proclaims, helps victims feel more comfortable as they know where a criminal is.

However, one can dispute that cell phones may be the main cause of these crimes. The availability of cheap cell phone spyware makes it easier for stalkers to track their victims ( News 10 abc, 2013). Clearly then, cell phones are easily used as crime devices.

The next reason to emphasize the dangers of cell phones is the fact that it causes distractions. However, cell phones inevitably do help people communicate conveniently without boundaries. For example, busy business workers can multitask by talking to clients on the phone while driving. Despite that, researchers have found that driver distraction is one of the main causes of road crashes, it accounts for approximately one quarter of car crashes (Mypolice,2013). Opponents may argue that using hands-free devices is the solution. However, in 2005, Western Australia conducted a case-crossover study with results showing that the possibility of car crash increasing due to cell phones is four-fold, regardless of the presence of hands-free devices.

Similarly, researchers at the University of Illinois have tested the hands-free approach and found it to be just as dangerous as driving with a cell phone in hand ( abc News,2005). This shows that the presence of hands-free devices is indifferent. Consequently, focusing on technologies is not the solution to combating road accident. A research collected for a study in New York suggest that even with the exploding use of cell phone nationally, there has been no dramatic increase in the number of car accidents. However, recently, London Evening Standard News reported a derailment of a Spanish Train, resulting in 79 deaths while the driver was on his phone. This evidently shows that cell phones can cause distractions. Therefore, it is nevertheless dangerous.

The third reason to oppose cell phones is the fact that it is a health hazard. Although cell phones may cause harm to one’s health, one can also reduce stress levels by listening to music or playing games on cell phones. Despite that, the bigger picture is mobile phones can cause cancer and using one for just 17 minutes a day dramatically increases the risk (Express, 2013). This recent study suggests that when cell phones are in use, there is considerable oxidative stress on the glands and tissue it is in contact with. The damage it caused linked to cellular and genetic mutations which cause the development of tumour such as the case of Tiffany Frantz, who had breast cancer at the age of 21 as she carried her cell phone in her bra every day ( KTVU, 2012).

However, it could be argued that other electronic devices such as computers are more dangerous. This is true as 70% of adults and 30% of children and adolescents have reported musculoskeletal symptoms in different parts of the body in relation to the use of electronic devices (Science Daily, 2013). However, cell phones are the most frequently used among other devices and its use requires direct contact to the skin near the head and ear. Therefore, it is relatively a health hazard.

In conclusion, although the benefits of cell phones vary in many aspects, the dangers it caused are seemingly intense. Therefore, society should be aware of current findings that emphasizes its dangers. 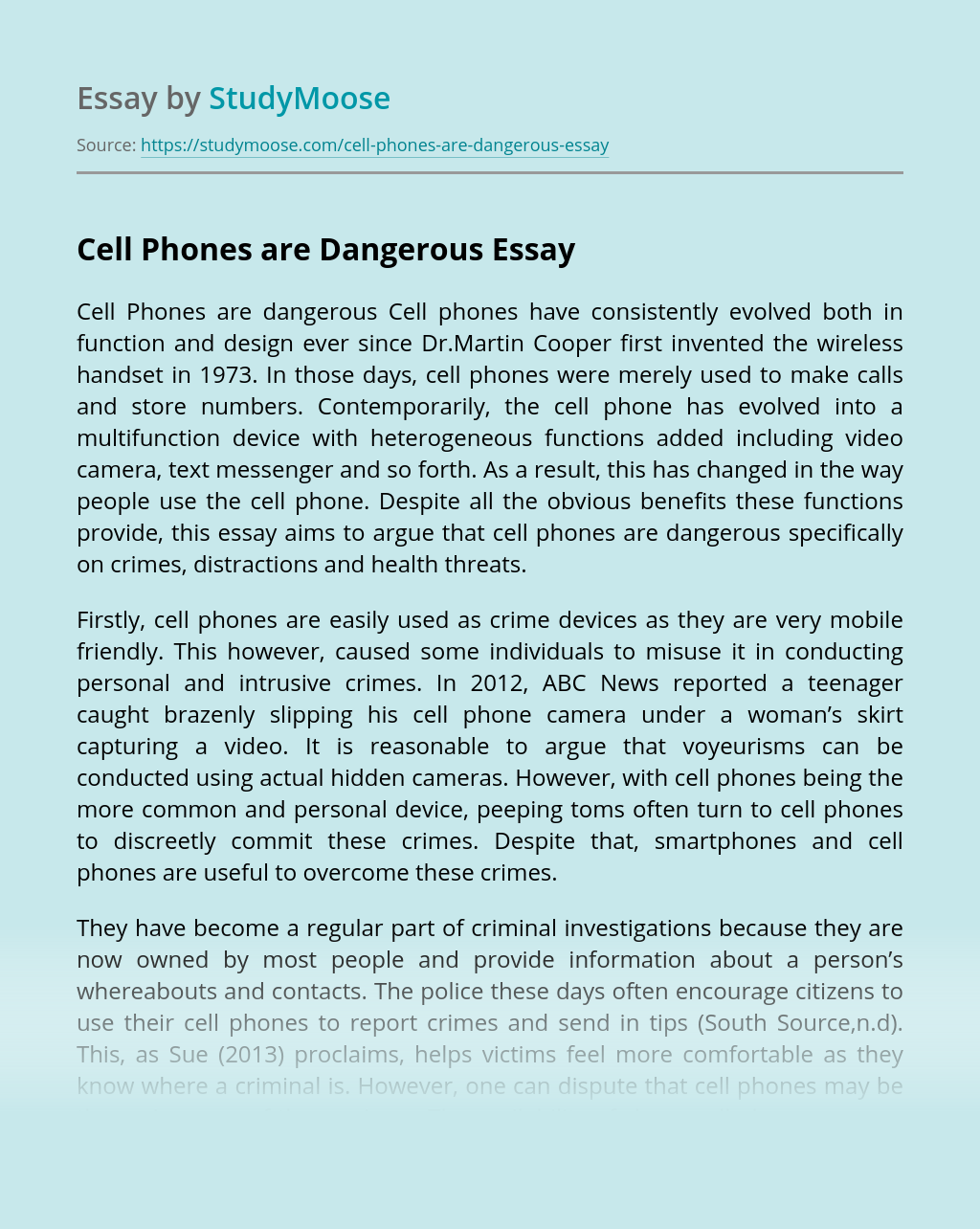