Effects Of Cell Phones On Society

The cell phone as we know was invented in the 1990s, and this invent has been one of the best inventions in the history. The use of the cell phones became popular and people began to utilize them in their daily lives. Nowadays to have a cell phone is not a luxury, is a necessity. According to the statistics, nine of ten persons in the United States have a cell phone. The cell phones have made positive and negative changes in our culture depending on the way people use them.

Don't use plagiarized sources. Get your custom essay on
“ Effects Of Cell Phones On Society ”
Get custom paper
NEW! smart matching with writer

Some of the positive effects of cell phones are easy communication and multitasking. The main usage of the cell phone was to be able to communicate easily. Originally, the cell phone was made only to talk when people were away from home or their office. After the years, they have been creating new technology that allow people to talk, text, email, browse the internet and make a videoconference sometimes at the same time, so we can say that the cell phone created better communication in the advantage world.

In addition to easy communication, the cell phones are multitask. They have added many more options to make our lives easier. Now people don’t have to carry a map, gps, laptop, video camera, radio or a notebook. Also, people can play video games or watch a movie with only one small device.

The cell phones have many positive effects; however, they also have negative effects like the high cost, negative social effects and dependency or addiction.

The first negative effect is the cost. The newest Smartphones are expensive and their lifetime is short. They are always coming up with new upgrade technology that make people feel they need to buy the newest model. Also, the cost of the service is expensive; users need to pay depending in how many minutes they need or the Internet velocity. In addition users will pay for extra programs, applications and accessories not including in the monthly pay. Another negative effect is cell phones can create addiction or dependency. The cell phone can make people an addict because they feel that they need to have it with they all the time and also cause anxiety for example, when you think you lost your phone you could feel stressed out about losing information saved on it. Moreover, it distracts your driving and it can cause an accident. Finally, there are the negative social effects. Since the Smartphone was created, people don’t communicate face to face as much as before. People isolate themselves because they prefer to talk by phone rather than verbally. Also, they have become very disrespectful because they use the phone in meetings, at church, in class, eating with friends etc.

Effects Of Cell Phones On Society. (2016, Feb 29). Retrieved from http://studymoose.com/effects-of-cell-phones-on-society-essay 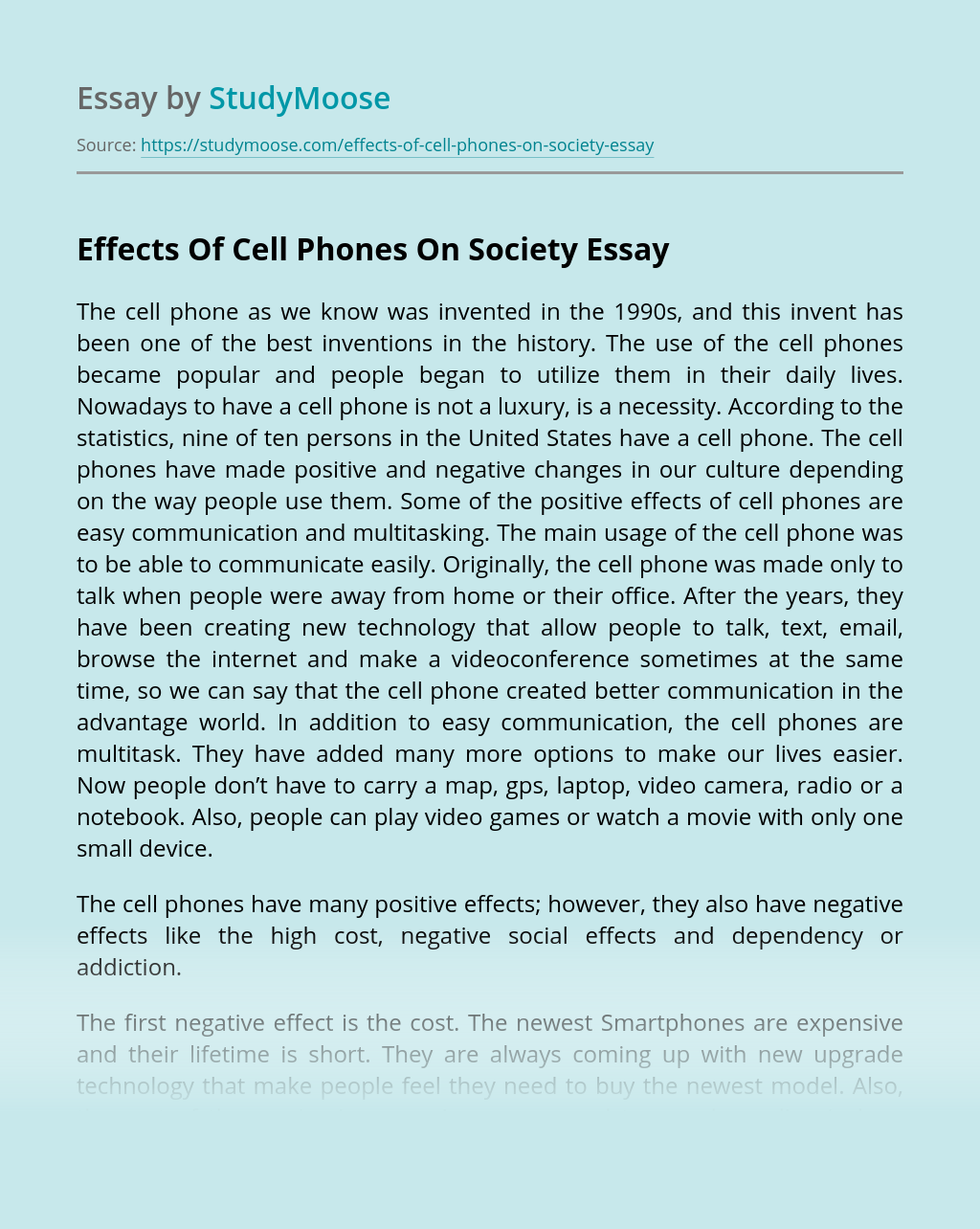