Technology is changing the world, and there are multiple examples of this assumption. People today are able to do such action and take part in such activities, which could have hardly been even imagined decades ago. Using the example of the telephone, as the means of communication, it is possible to trace the changes of technology and its growing impact upon humans and their environment. Today most people in the world are aware of what a telephone is.

Don't use plagiarized sources. Get your custom essay on
“ Compare and Contrast – Regular Phones and Smart Phones  ”
Get custom paper
NEW! smart matching with writer

Alexander Graham Bell is considered to be the inventor of the telephone. But certainly, this was a usual two-way communicating device, having little in common with modern smart phones. At the moment if its invention, it was a great discovery in the sphere of human communication, as it had changed the system.

Proficient in: Mobile Phones And Children

The Modern world could hardly be imagined without smart phones, most people even state that they are not able to live without their smart phones, as they use them for solving problems in private and professional lives. Comparing the contrasting of regular phones and smart phones, it is possible to point out some similarities, but in fact there are more differences between the two types of technology.

A mobile phone is generally an electronic device, with the help of which users are able to make and receive phone calls across a relatively big geographical area thanks to a number of public cells.

The users of mobile phones use a wireless network for the process of communication, in other words, this is a network without any cables or other similar connections. Usual telephones are the devices, which transform individual’s voice into an electrical signal, consisting of varying electric currents. This signal is sent along copper cables before it could reach its destination. In some cases, it could be changed into pulses of light and sent along with thicker glass stands, which are also known as optical fibers. It is possible to send the signal with the help of radio waves and microwaves.

“In case of public switched telephone network (PSTN), the landline trunked lines (trunks) are used for transfer of information. These trunks consist of fiber optic cables, copper cables, microwave links and satellite links. The network configuration in the PSTN is almost static as the changes in the network connections would be required only when the subscriber would change the residence.” (Huurdeman 2003). At the same time wireless networks are very dynamic, and the network configuration needs to be remade each time, when the subscriber moves into the coverage area of the new base station. Fixed networks are certainly difficult to change, because wireless networks should reconfigure themselves for the users during small intervals of time to secure imperceptible handoff between calls.

Most of the users are convinced that cell phones have only advantages in comparison to regular phones. In reality they have both advantages and disadvantages. Certainly, one of the important advantages of the cell phones are that it could save a lot of money in comparison to land line phone. The information is transmitted not with the help of phone line and there is no need to be focused upon the real distance any more. In this way making calls with the help of cell phones becomes almost unlimited; at least the cost is not related to the distance. The major disadvantage about cell phone could be its dependence upon power, so as soon as it goes out, it is not possible to use the phone and make phone calls. Sometimes there are also problems with contacting emergency services, which could be related to traditional phones and not related to cell phones.

The greatest difference between regular and cellular phones relates to their functionality. Initially phones were invented with the aim to send voice messages without the need to travel to the recipient of the information personally. This innovation had definitely changed the way of human communication to a great extent. People did not have to send that many letters, they were able to send the needed information with greater speed; they could rely upon this way of transmitting information in their business as well.

The functions of cell phones could be explained with the slogan for the users “your life is in your pocket”. This slogan might seem to contain too much pathos, but it is true to life for modern cell phone users. Both children and adults are nowdays so much used to their cell phones, that they are not able to imagine spending even an hour or two without them. They are used to be constantly connected to their friends and close people with the help of various programs, installed on their cell phones. These programs and applications allow communicating without using usual telephone functions, there is no need to make a phone call any more to pass short message or piece of information to another person.

The functions of the cell phone are not limited to communication any more. Most of them have cameras, so that their users are enabled to make photo and video samples at any given moment of time. They are able to check their emails, to manage their everyday businesses, to calculate their finances, to read books and do fitness and so on. The variety of the offered programs and applications for smart phones is great nowadays. Smart phones became integral parts of younger generations of people as well. “Smart phones are becoming a social necessity which teens cannot be without. On the other hand, a majority group of teens views their smart phone as the key to their social life. From texting to talking, and logging on to social networking sites, teens carry smart phones to have access to friends, family and current events.” (Huurdeman 2003).

One more important difference between regular and smart phones is related to human privacy. At the moment, when regular phones were developed, nobody actually considered them to be a potential threat to human privacy due to their limited functions. Nowadays the situation is different. Taking into consideration the amount and variety of functions, offered by smart phones to the modern users, it is clear that the issues or privacy is in danger. People are used to sharing their personal data and information, and they do not simply become close to their friends in this way, but they also risk their money and their lives. It is difficult to interpret this characteristic of smart phones at more negative or more positive but is it a significant difference from regular phones for sure.

Overall, the paper compares and contrasts the two types of technology – regular phones and smart phones. The basic function of both is similar, these technologies were invented and updated for human communication, but a lot of significant differences, related to the technical side of these technologies and their functionality and potential impact upon human lives. Comparative analysis of these two technologies could be of great use for making assumptions about the technological progress and its meaning for the humanity in general. 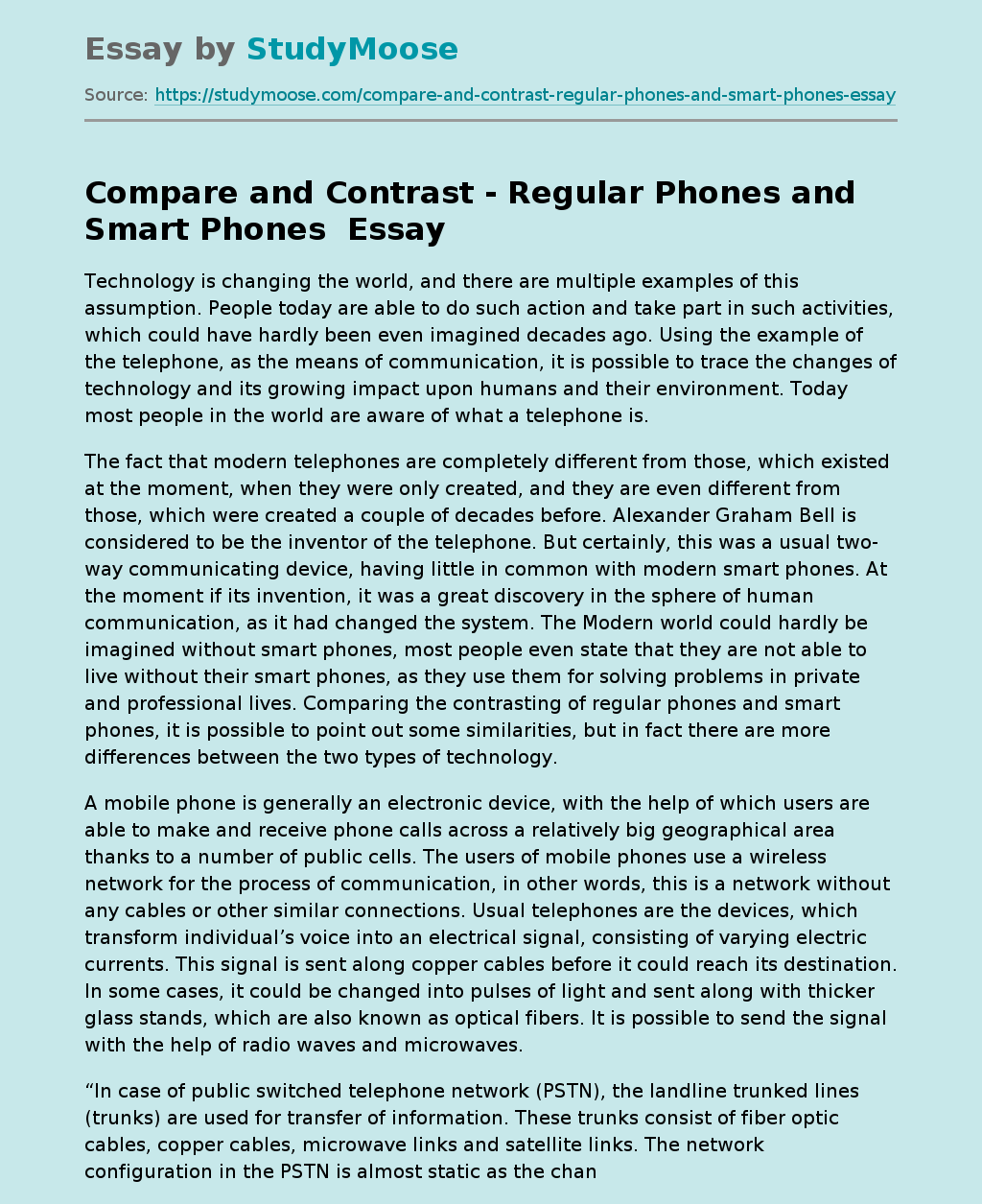