Compare and contrast the practices of Apple and Samsung

Compare and contrast the practices of Apple and Samsung

Both Samsung and Apple are the largest manufacturers of smart phones in the world. Combined, the two technology giants’ account for more than half of the Smartphones sold world wide. Traditional cell phones had very limited computing abilities. Many of them were designed to offer basic services like making and receiving calls. As time went by, the need for mobile devices with superior computing abilities increased as technology became a major part of modern life.

Don't use plagiarized sources. Get your custom essay on
“ Compare and contrast the practices of Apple and Samsung ”
Get custom paper
NEW! smart matching with writer

More importantly, there was demand for mobile phones that could offer the same services with a computer. Although the mobile phone market was traditionally ruled by companies like Nokia and Motorola, Apple took over the market when it launched its iPhone mart phone in 2007. This product became very popular with customers due to its large touchscreen and multi-touch user interface. Although the company dominated the Smartphone market for some time, it has come under increasing competition from Samsung through its Samsung galaxy product line (Apple, 2013).

Through massive advertising coupled with unique features, the Samsung galaxy has overtaken the iPhone to become the most popular Smartphone brand in the world. This fierce competition between these two technology giants has resulted in endless court battles in the United States and Europe, among other places. This paper will compare and contrast the business practices of these major technology companies.

The source of raw materials

Despite the fact that Samsung manufactures the majority of the components used in the manufacture of its products, there are a number of components that sources from other companies.

These components include LCD displays used in its line of Smartphone products, the application specific integrated circuits, microprocessors, optical drives and microprocessors among others. Sourcing for such components is advantageous to a company because it eliminates the need to invest in the manufacture of these components (Samsung, 2013). Some of the companies that are contracted by Samsung to supply the above mentioned components include IBM Corporation, Mitsubishi Electric Corporation, elite computer systems Co. Inc., LG Philips Co. Ltd, Ambit Microsystems, Inventec appliances corporation, Selectron Corporation, Quanta computer, Inc. and Toshiba Corporation among other suppliers.

The main raw material that Samsung uses in the manufacturer of its products is coltan. This material is very important in the manufacture of many of the products produced by the company including mobile phones. Coltan occurs naturally and is found in many parts of the world including Brazil, democratic republic of Congo and Australia (Samsung, 2013). Over the years, it has come to the attention of the company that coltan from Congo is contributing to the increased political conflicts in the country and poses a danger to the country’s wildlife. To ensure that the company does not contribute to the conflict in the DRC, the company has adopted a policy of not buying coltan directly from Congo.

The same with Samsung, Apple also sources coltan from markets like the democratic republic of Congo, Australia, Brazil, the united state of America and Indonesia among others. To maintain a good image among its customers, Apple has also cut down coltan imports from the democratic republic of Congo due to the endless conflicts arising from the minerals. The company has also warned all its agents from buying any raw material directly from the troubled country.

Over the recent past, Apple has adopted measures to cut down on its energy consumption. More specifically, the company has put in measures to ensure that it uses 100% clean energy from renewable sources in all its production plants throughout the world. In many locations, Apple has achieved this goal and plans are under way to ensure that all its plants use clean energy. Some of the measures that the company has taken include installing fuel cells and solar arrays. Moreover, the company is constructing energy efficient buildings as well as updating the existing ones. This has enabled it cut down its energy consumption by almost a quarter. From 2008, Apple has been able to reduce the power consumed by its products by over 40% reflecting its commitment to be the most energy efficient company in the world (Apple, 2013).

As a company, Samsung has also adopted a number of measures to ensure efficient use of energy. Some of the measures that the company has adopted include energy management systems in all its plants, using high efficiency facilities and carrying out training programs to educate employees on efficient energy use in all its production sites all over the world. Samsung is also implementing an internal energy management program namely, Pre-certification of Energy Efficiency. This program is meant for devices used within the company that use energy, raw materials and equipments and is aimed at promoting energy efficiency in the company’s operations. As a way of ensuring a more efficient and systematic energy use, Samsung has also established the international standard for energy management system (ISO 50001) in all production sites. The certification can be received from third party institutions by implementing energy reduction plans and by setting energy reduction goals (Samsung, 2013). The company received the ISO 50001 certification in all its production plants in Korea this year. In 2012, Samsung saved a total of 211,930 MWh in its production facilities in Korea alone. This was achieved through the use of high energy efficient equipments, recycling waste heat and optimizing production facilities.

Like Apple, Samsung has also realized the need to adopt clean energy in many of its facilities. Moreover, the company also supports the development of clean energy policies throughout the world by supporting different local and global initiatives. The company has also entered into green energy partnerships with its main semiconductor plant in Austin, Texas. In the United States Samsung has replaced 3.3% of its energy consumption with power from clean and renewable sources.

In the recent past, Apple has adopted a policy of using smaller packaging compared to the past. For example, the packaging of iPhone 5 is 28% smaller compared to the packaging of the iPhone back in 2007. This policy has been driven by the company’s desire to cut down carbon emissions. 5 % of the company’s total greenhouse gas emissions comes from the transportation of products from the place of manufacture to the distribution centers (Apple, 2013). The company’s packaging is designed by renowned engineering expects who ensure that they are light and slims and still protective. As a company, Apple believes that efficient packaging is important because it helps cut down on waste as well lowering the amount carbon emitted into the atmosphere during the transportation of the products.

Unlike Apple, Samsung has adopted a policy of collecting and recycling all its packaging instead of producing smaller ones. Through its agents in different countries, the company funds collection of its packaging which recycled and reused in packaging products. These efforts are designed to ease the effect of these waste products on the environment. However, the company is also moving towards smaller packaging but not at the same speed like Apple (Samsung, 2013). Unlike Apple, the Samsung believes that there would be no need for smaller packaging if packagings are collected and reused. Moreover, Samsung has not done much to cut down greenhouse emission in the transportation of its products from the manufacturing plants to the end consumer. Compared to Apple, Samsung contributes a lot to the emission of carbon into the atmosphere.

The incentives used by both Samsung and Apple have affected their images in a big way. Today, we live in a world faced with many challenges including the global warming. The world is witnessing some of the worst natural disasters in history. The recent tsunamis, wildfires, typhoons and earthquakes have made many people rethink about their stand on the issue of global warming. It has been proven that human activities are the largest contributor to global warming through the emission of greenhouse gases into the atmosphere (Samsung, 2013).

Both Samsung and Apple have earned a reputation for being the most innovative companies in the Smartphone industry. Although Apple dominated this market in the past years, it has been overtaken by Samsung in terms of the number of units sold. To begin with, the policies and practice adopted by Apple has earned it the reputation of the most innovative and environmental friendly company in the world. Through the adoption of environmental friendly and power efficient production polices, apple has earned a good reputation. This explains why the company rose quickly in the early 2000s. Moreover, Samsung has also earned a reputation for its innovative products and policies towards ensuring a greener environment. More importantly, the company’s policy of using clean energy and supporting initiatives aimed at promoting green energy has made it popular. These policies have earned Samsung a lot of customers.

In conclusion, there are a number of differences and similarities between these two major players in the technology and Smartphone markets. Although Apple has been the largest manufacturer and seller of smart phones for some time, it has been overtaken by Samsung in the last few years. Due to the nature of the industry that they operate in, both Samsung and Apple are sometimes forced to source for some components from the same source (Haydn, 2013). However, these components are covered by intellectual property rights laws and none can copy the other. For example, an LCDE screen produced by Mitsubishi Electric Corporation for Apple is different from that produced for Samsung by the same company.

Compare and contrast the practices of Apple and Samsung. (2015, Nov 16). Retrieved from https://studymoose.com/compare-and-contrast-the-practices-of-apple-and-samsung-essay 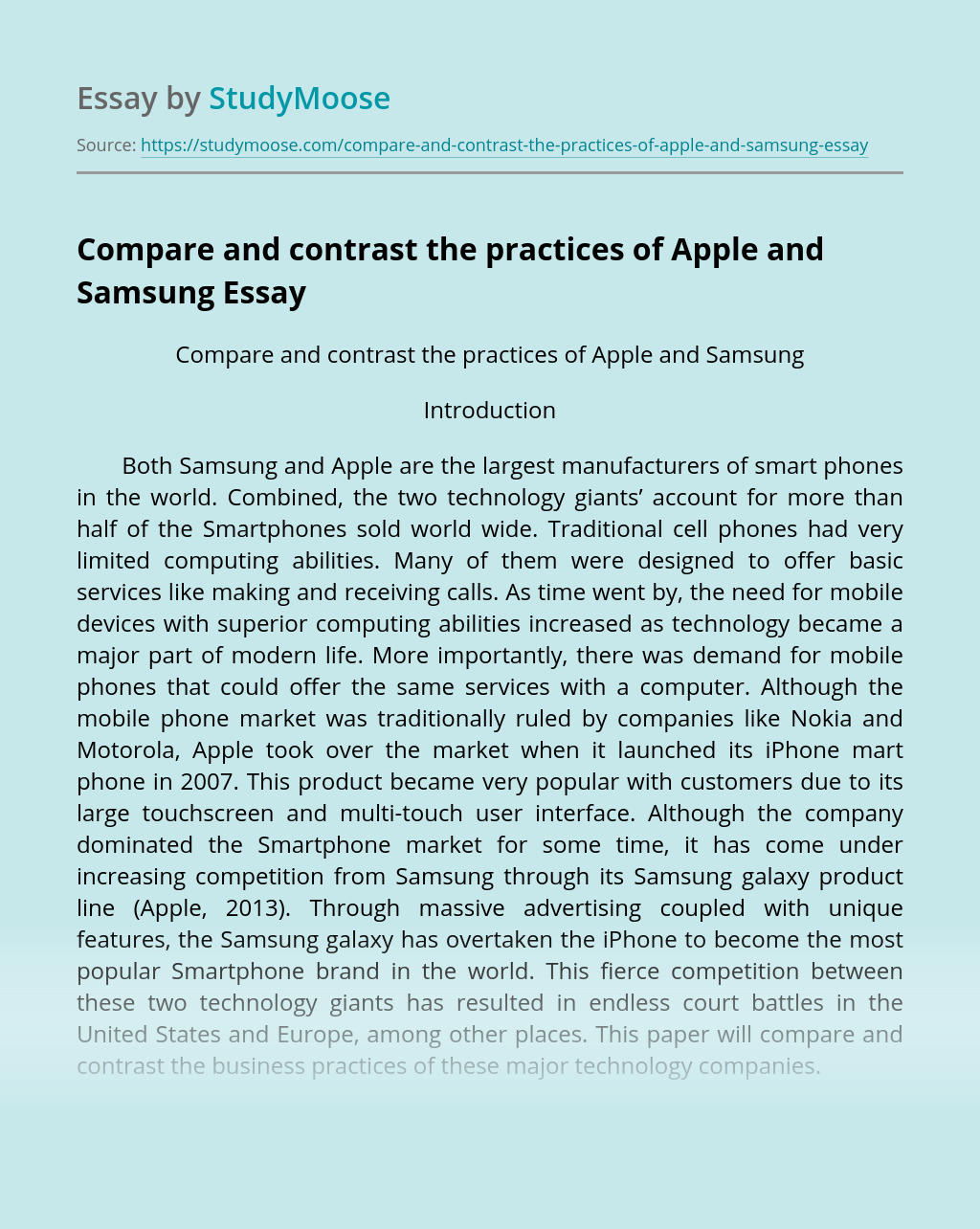