Samsung vs. Apple - The smartphone wars

The Samsung Galaxy S has a better os than the Apple iPhone, which is why Apple is suing Samsung over violation rights; greed took over. The mobile phone fad was started in 2007, when the Apple Corporation strove to be the next innovative mind in the electronics world. These innovations were followed by greed and a desire to own the marketplace. Samsung and Google wanted a piece of the smartphone market; they launched the Android smartphone in 2011. This release is what generated the lawsuit that still drives on today.

Don't use plagiarized sources.
Get Your Custom Essay on Samsung vs. Apple – The smartphone wars Just from $13,9/Page

Apple vs. Samsung: the war to own the smart device market.

The Apple Corporation reinvented the cellular phone market in 2007 when it came out with the iPhone. This phone took the customer from simply playing video games and talking, to multi-tasking within the confines of a lightweight portable device. This phone provided functions such as a multi-touch screen that allows users to manage the phone with their fingers, music storage and playback, a mobile computing platform for portable applications, and full access to the Web.

The basic yet innovative style was rollovered to other Apple items; the iPod and iPad, because of ingenious technology and distinct style these items attained instant success.

Apple is a California corporation that was started by Steve Jobs and Steve Woznaik in 1976 after creating a new computer board in their garage. Jobs and Woznaik stayed with Apple until 1985, where they left to pursue other interests after a clash with co-founder John Sculley. Jobs went on to form Next Inc., a new computer company making high-end machines for universities. In 1997 Steve Jobs returns to Apple as Interim CEO. In 2000 Jobs Interim title was dropped, he was once again CEO of Apple. In 2007 the iPhone is released (The Associated Press, 2011). Samsung Electronics Co., Ltd. (referred to individually herein as “SEC”) is a Korean corporation and is one of Asia’s largest electronics companies. Samsung Electronics America, Inc. (referred to individually herein as “SEA”) was formed in 1977 as a subsidiary of the SEC. Samsung Telecommunications America, LLC (referred to individually herein as “STA”) was founded in 1996 as a subsidiary of SEC. Shin Jong-Kyun the CEO of Samsung paired up with Google’s chief executive officer Eric Schmidt. Eric served as a member of the board for Apple from 2006 to 2009. In October 2011 Samsung and Google introduced the Galaxy Nexus (United States District Court Northern District of California, 2011).

Apple uses a system called IOS6; this operating system has been refined several times since its origin. This operating system consists of Mac OS X 10.7. Mac OS X 10.5 PPC, Mac OS X 10.6 Intel. The iPhone features a camera that has a 5.0 megapixels, with live video capture and playback, iTunes® that supports AAC, MPS, MPS VBR, Audible, Apple Lossless, AIFF, and Wav. Extras include world phone, USB connectivity, and hands-free speakerphone. The dimensions are 4.54×2.31×0.37 inches with a weight of 4.83 ounces. The resolution is 960-by-640 pixels at 326 ppi. The Bluetooth® technology is 2.1 with Enhanced Data Rate (Apple iPhone 4, 2012).

Samsung uses a system called Android. The Android operating systems have been refined sense the start of the smartphone invasion. This operating system consists of Android Ice Cream Sandwich that is the fourth in its line. The Galaxy series phones feature an camera that has an 8MP autofocus with LED flash, with live video capture and playback in HD 1080p video capture, and a music player that supports MP3, AAC, AMR, MIDI, WAV, and WMA. Extras include world phone, USB connectivity, and hands-free speakerphone. The dimensions are 5.15×2.75×0.37 inches with a weight of 4.65 ounces. The resolution is 480-by-800 pixels resolution (Samsung Galaxy S II Skyrocket, 2012).

There are other specifications included on each of these brands of phones, as can be seen they are fairly similar with the exceptions of the name. Other added applications to both phones can include Facebook, Twitter, Google Maps, miscellaneous productivity applications, and both have text messaging and games. The biggest difference is the consumer will decide on the best price and look of the unit. Based on consumer reports, the Android fared better in the marketing scheme; it had better graphics, easier user interface, and all together a better phone (“Smart phones” 2011) (“Smart Phones” 2012).

With the similarities of the units, the California courts decided that Samsung had infringed upon the rights of Apple. Apple’s request for Samsung’s most popular smartphone and tablets be removed from American markets was granted based on the findings as follows: “The scorecard highlights:

Samsung not agreeing with the court’s decision filed a countersuit against Apple. The countersuit claimed that because Eric Schmidt, Google’s chief executive officer, was a member of the board at Apple when the iPhone was released, that he took design patents with him to help improve Google’s Android OS. The creation of the Android OS infuriated Steve jobs and left him feeling betrayed, especially since the Android market was overtaking the Apple IOS market. Samsung also added in the countersuit that Apple does not have the monopoly on the smartphone market. Court Overturns Decision

When Samsung’s countersuit was dismissed there was an appeal submitted. The appeal was based on one of the juror’s patents for a smartphone. Jury supervisor Velvin Hogan failed to mention his lawsuit against Seagate and his bankruptcy. Samsung has a strategic relationship with Seagate, and the lawyer that filed the complaint against Hogan is married to an attorney that works for the firm that is representing Samsung (Bode, 2012). Even though Samsung had proven that the juror was not completely truthful about his past, this is not what turned the case to Samsung’s favor. The overturned case came from the “U.S. Court of Appeal for the Federal Circuit” which had earlier slapped a stay on the injunction, ruled that Koh’s court had “abused its discretion” by issuing it in the first place (Paczkowski, 2012, para. 3).

It also overturned the ban, ruling that “Apple has presented no evidence that directly ties consumer demand for the Galaxy Nexus to its allegedly infringing feature” (Paczkowski, 2012, para. 3). With this decision in their favor Samsung was elated and issued a statement saying “Today’s decision confirms that the role of patent law is to protect innovation and not to unreasonably stifle competition and restrict consumer choice. We will continue to take all appropriate measures to ensure the availability of our innovative products” (Paczkowski, 2012, para. 4). Samsung has continued to introduce new products despite the lawsuit. These products underwent slight changes of name and configuration, this entire lawsuit has allowed Samsung to surpass Apple with a better product and more costumers.

With Apple as the originator of the technology that is now called the smartphone, they have a right to certain aspects of this technology which is their propriety right. Samsung and Google might have infringed on some of the patents that Apple had. What it all comes down to is the CEO of Apple, Steve Jobs, was upset about the fact that the android technology, which mimicked the Apple technology, was created to compete with Apple’s IOS technology by some of the people on his own board. Steve was upset that his people wanted to be like him, innovative and successful in the ever so popular smartphone market. This is the driving force behind the lawsuit that is already showing signs of failure. Even with the lawsuit and after the lawsuit there will still be the Android operating system, which is more user-friendly and more widely available throughout all providers. The United States is not a place to have a monopoly on any market; it is a place for people to strive to be everything they can. That is what has happened here, and greed got in the way.

Samsung vs. Apple – The smartphone wars. (2016, Oct 25). Retrieved from https://studymoose.com/samsung-vs-apple-the-smartphone-wars-essay 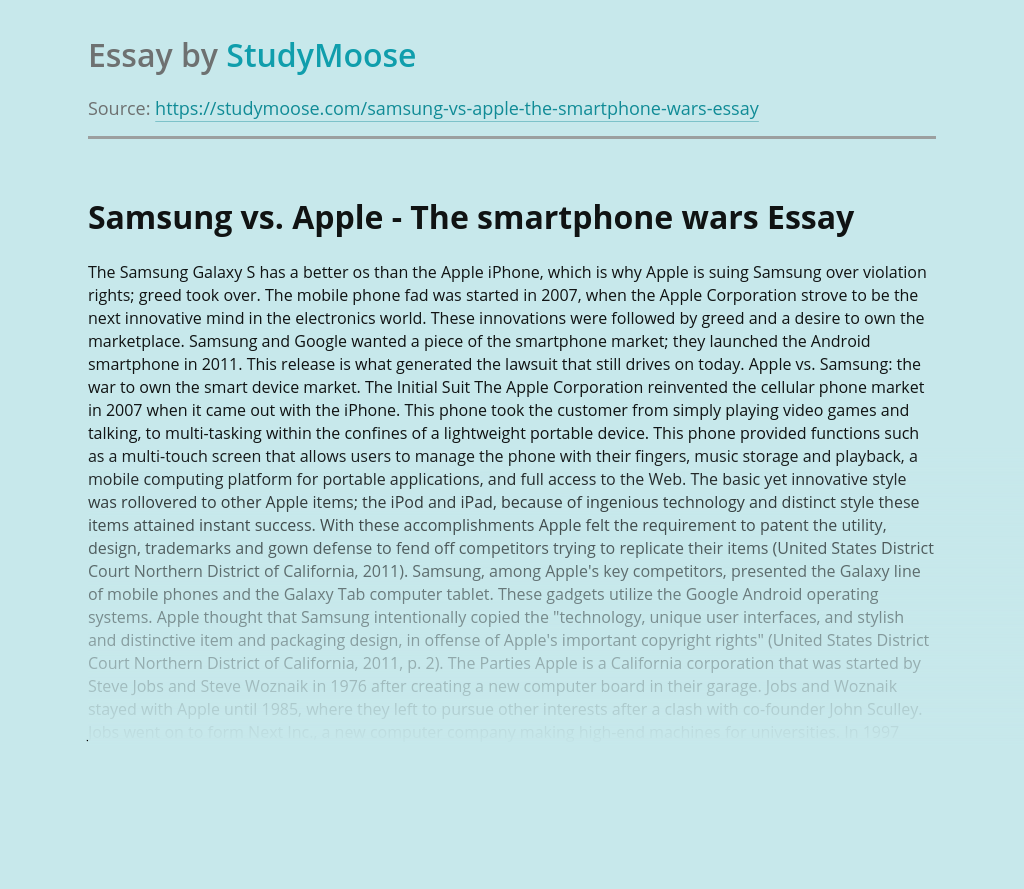 The ancient Greeks and Romans left such artistic treasures in art and architecture that the world is still using them as models. Their sense of style and symmetry was such that everything seemed to fit together perfectly. There was an emphasis on the capture of beauty and perfection so that what is left will always...

Get Essay
Art and Architecture in Daily Life

When searching for an architecture piece that would catch the eye, there were many to pick from. Finding one that would be remembered that was a little harder, but never the less the one that was found was so beautiful and very inspiring. There are many buildings that are built for different reasons such as...

The flow of blood stopped and History recorded a tragic death. King Duncan over ten years was the most trusted noble. He was a good and Godly man, friend to the poor and defender of the downtrodden. He had been given the title, “Thane of Fife”. But he is no more with us. Our King...