The conflicts between Apple and Samsung

In the emerging market smartphone usage is increasing, while the most representative brands are Apple and Samsung. Apple is the most valuable US brand that has played a dominant position in US; while Samsung is a South Korea multinational conglomerate firm and the represent products are innovative and revolutionary smartphone and tablet. Apple and Samsung are the most extraordinary companies in terms of the advanced productions and market capitalization (Cantor, 2012).

However, Samsung and Apple have a direct conflict relate to their company’s several patents.

Don't use plagiarized sources. Get your custom essay on
“ The conflicts between Apple and Samsung ”
Get custom paper
NEW! smart matching with writer

As a result these two companies sue each other on the account of preserve their copyright and intellectual property. In this essay will analyze the competition between Apple and Samsung. Then, will explore the conflict between these two firms through 4Ps framework: product, prize, promotion and place. Finally, will examine the marketing relationship between these two companies. The fuse between conflicts is the increasing competition and differentiation of products.

It is recognized a conflict superficially, but in fact it can be regarded as an approach to facilitate the growth of technology, and improve the quality of products and customer service.

The competition would enable companies embark on a massive opportunities and compete in contemporary business market successfully. Hunt (1995) pointed out that ‘an industry is only competitive if the price, quality, and performance of its production is at least equal to that of it competitors and provides the combination demanded by customers’.

Apple and Samsung are at similar level of technology and positioning. As a result the existence of competition between these two companies is regard as natural due to the development of market.

For example, in Samsung’s Galaxy ad, it shows that the craze for Apple’s new product was evident from fact that plenty of adherents of Apple who were waiting long queues outside the Apple’s store, the Samsung Galaxy S3 users poke fun at those Apple’s consumers who were waiting for the new productions of Apple. As a result of Apple accused Samsung at the end Apple won the lawsuit. Nevertheless this offense is just one of the infringement between these two companies, Samsung also appeal to the court that Apple infringe its device patents (Cantor, 2012).

The infringement stem form the fiery competition between Apple and Samsung. Samsung had willfully infringed on Apple patents and these two companies are engaged in a public conflict on intellectual property infringements. Apple and Samsung’s patent infringement will be regarded as a remarkable case for smartphone patents for a long time (Business Monitor International, 2012, p1). However, the litigation is not just passed like that,Business Monitor International (2012) expects that ‘with Apple seeking bans on devices and Samsung likely to appeal the verdict’.

The competition between Apple and Samsung bring plenty of drawbacks to these companies. However, the advantage of competition of firms can offer high quality products and low delivered cost for customers. Products are paramount for companies and it can embody the companies’ products are accepted or not. The core element of company’s success is developing new and innovative product to the marketplace (Jobber, 2010, p384). Apple is one of the world’s most innovative companies, which its Mac and iPhone are successful in the mature smartphone market. In addition, Samsung’s new smartphone is also functional and remarkable.

Samsung infringe Apple’s patent and Apple take action to the court, Apple use its advantage to press Samsung’s electronic product and ask the court to order a ban to block Samsung’s electronic launch to the US market (Cheng, 2012). Lucy Koh who is the US District Judge planned whether make an injunction to block the sale of eight Samsung products in the US market. Owing to the jury made a verdict on this issue and found that Apple’s patents have been infringed. As a result, the Korean company had to put off the date of entry US market (Doug Cantor, 2012).

However, recently Samsung appeal to a federal district court that the new Apple’s Mini iPad and fifth-generation iPod violate its patent (Hamilton, 2012). Furthermore, Apple had infringed a patent of wireless technology that owned by Samsung. Even though Apple won the first lawsuit, it does not mean the verdict will be clean over. The dispute between the two firms patent not so easy to end. One of the key factors of marketing mix is price, and the usually price should be blended with promotion in order to provide superior customer value (Jobber, 2010, p422).

In the handset market, customers are more focus on the price of production in this field, as a result of Samsung has a potential capability on the smartphone market on account of the products price of Apple is usually higher than that of Samsung’s. It is known that Apple is high price leader; in the last several years Apple used its price strategy to beat rivals on price. For example, if customers want to buy a new Apple smartphone, but the price is extremely high for them to afford it, the customers were willing to wait in line, they can spend $199 and sign a two years contract with a carrier, they can own this new technological smartphone.

In addition, Apple using its growing manufacturing scale to bring down its cost of product result in the price of products is decreasing (Wingfield, 2011). On the other hand, Samsung is ride on the Android platform, which is offered by Google, as Apple product’s price is a litter higher for most of the “middle ground” customer and keeps away the mass customers, therefore Samsung aggressively targeted to those consumers in the smartphone market (Sridhar, 2012). The same purpose of these two companies reducing the price is aim to recruit more new customer.

Consequently, the Price war on smartphone is become more severe. Manufacturer not only produce high quality product to satisfy the needs of their customers, but also need to explore channel intermediaries to improve the distribution. Manufacturers can use different type of channels to supply their products to consume result in enlarge the coverage of sale. For example, using digital technologies- Internet (Jobber, 2010). Apple has created its own online retail store, and using iTunes to supply music download from Internet, Application software to the owners of iPhone or iPad (Jobber, 2010).

And a large number of applications are available in the App Store, which is strongly surpasses the vast majority of other competitors’ application software. Apple also creates it owned online support service and online shopping for their customers. Otherwise, Samsung also use App for Android mobile device that offer application software, music for customers to download. However, Apple declares that Samsung’s app has supposedly copied Apple’s app icons which including the app icon for the Phone app, Music app, Contacts app, Photo app, Notes app and Settings app, the Samsung’s App online Store is similar with the Apple’s (Smith, 2012).

The conflict between these two companies is not only the product right infringement, but also the application design infringement. In the light of increasing global competition, firms tend to operate the process with other firms to build a business relationship in order to accelerate their technology and acquire more new customers. Although the conflict between Apple and Samsung in a fiery situation. In the business market the marketing relationship between Apple and Samsung is one of a way to make success in terms of market exchange and cooperation. It is becoming clear to managers in forward-looking organizations that ‘no business is an island’, every organization needs to interact with other organizations’ (Cater and Lee, 2012, p421). Cater and Lee (2012) argue that the relationship of business to business (B2B) market is extremely important within the distinctive supply chains. Apple and Samsung are no exception; in the business perspective these two valuable companies are partner, Apple’s exclusive supplier of application processors is Samsung such as Apple’s two major categories of production iPhone and iPad (Jung-a, 2012).

The Chosun Ilbo, Korea Daily newspaper reported that Apple purchased 130 million mobile processors last year, which is expected to continuous buy more than 200 million mobile processors this year. Between these two large-scale companies not only exist the competition and conflict, but also the business marketing relationship in order to make benefit for both companies. In a long term, the most of the handset smartphone market have to create more innovations to make sure their products are not been eliminated and seek a foothold in the new revolution market.

The conflicts between Apple and Samsung. (2016, Sep 27). Retrieved from https://studymoose.com/the-conflicts-between-apple-and-samsung-essay 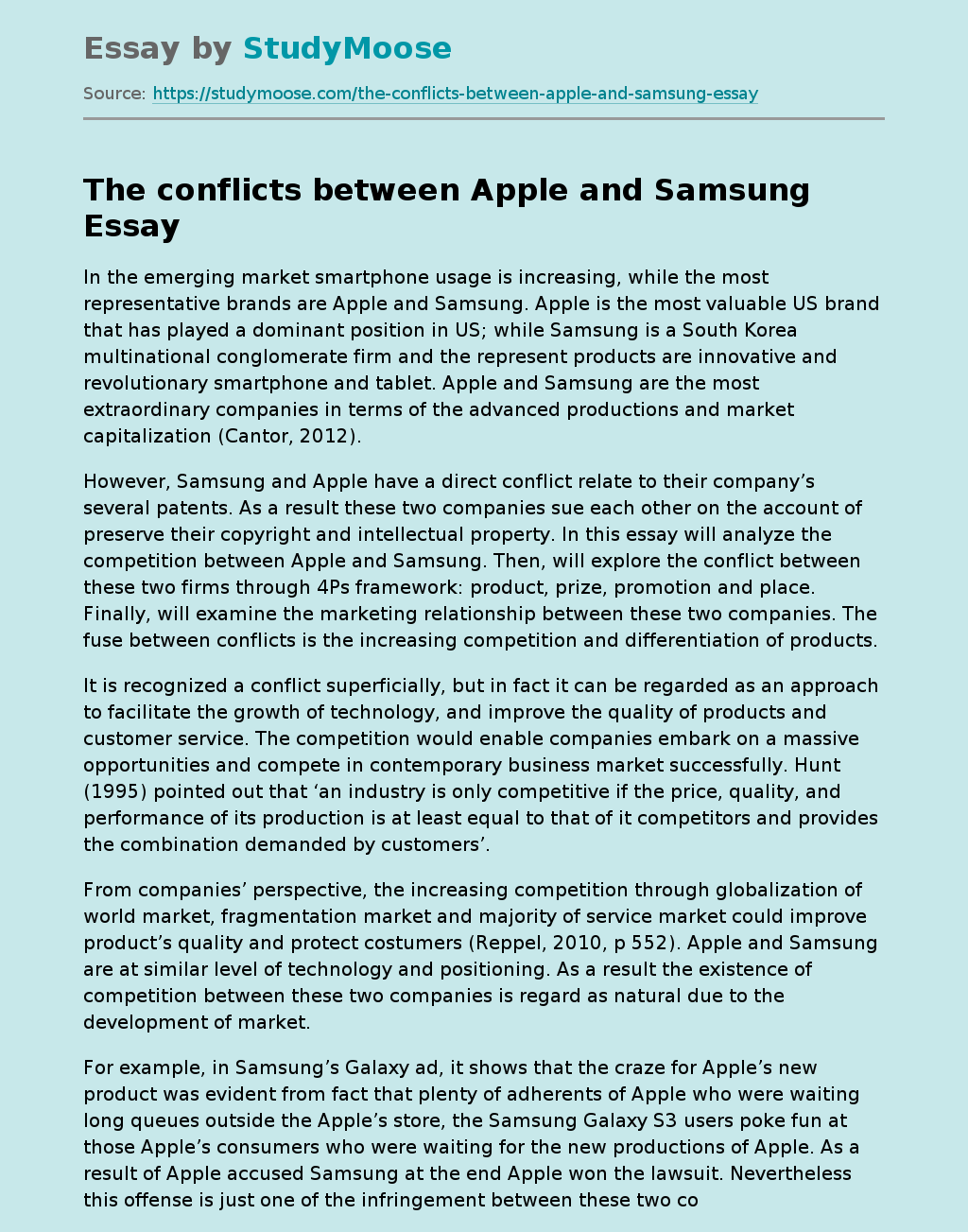