Problem Statement:
Memory industry is expected to experience a cyclical downturn in 2005. Samsung has been a market leader in memory chip technology and has constantly remained ahead of its competitors. But over the last few years memory industry is experiencing fierce rivalry and Samsung is facing fresh challenges from new Chinese entrants. Many mainland Chinese firms who have so far focused on the logic chip market are ready to enter the memory chip market.

Entry barriers are high in the memory industry as it involves high capital investment and complex technology. But these Chinese firms with the help of joint ventures and foreign partners are in a position to get license and technology. These new entrants have patience to sacrifice years of profits to gain market share just like Samsung had in 1980s. Strategically, Samsung has two options:  one is to actively collaborate with Chinese partners which would provide access to local Chinese market, cheap resources and local talented engineers.

The other option is to invest heavily in cutting edge flash memory products to gain critical flash markets and leave low end of the DRAM market for Chinese companies.

In the next section we will analyze the level of competition within memory industry based on Porter’s model, Samsung’s competitive advantage and its sustainability considering the current market situation.

Analysis:
Considering Porter’s model as a framework to analyze the level of competition within DRAM memory business, the threat of new entrant is high compared to the threat of substitutes and established rivals in horizontal competition.

If we look at rivalry within the DRAM industry between established players, Samsung has a clear advantage over its competitors. Samsung is the market leader in DRAM memory business. It has a wide range of products and its products has a higher brand value. Threat of new entrants is high as Chinese competitors have easier access to large pool of local engineering talent and have a growing market for these DRAM chips. The government is also providing all sorts of assistance, like subsidized land, for the initial setup. Samsung has several options to deter the entry of new Chinese competitors. One option Samsung have is to continue to explore and increase market shares of flash memory markets which is a new and growing market. Samsung can also take advantage by lowering the price of DRAM chips. This would force a price war and drive new Chinese competitors out of the market.

Nanotechnology may be a possible substitute and may eventually replace DRAM chips, thereby nullifying Samsung’s DRAM technological advantage. But the chances of nanotechnology acting as a  substitute for DRAM is very low, at least in the near future. Buyers are largely OEMs, with no one controlling more than 20% of the market. OEMs are price conscious and they negotiate hard for price but they also pay 1% premium for reliability of DRAM memory. So, the bargaining power of buyers is medium as the buyers are highly fragmented and are also looking for reliable chips by not focussing solely on low price.

As the memory technology grew more complex, the number of suppliers became more concentrated. Only 2­3 key players are dominating the equipment market but they are also providing a discount for high volume buyers (like Samsung). So, the suppliers are powerful and have a higher bargaining power against low volume buyers (new Chinese companies). One of the options that Samsung has going forward, is to suppress the Chinese entrants by decreasing margins on the low­end DRAMs. A competitive price along with Samsung’s well­known quality would likely push its Chinese competitors towards more operational losses. Meanwhile, Samsung would still be able to earn revenues from its wide range of other memory products. However, a price war like this cannot be expected to sustain on a long run. In addition, China poses to become a crucial market for the semiconductors industry. So, Samsung can decide to partner with a Chinese firm for the production of its low­end products while keeping its new state­of­the­art products ­ whose intellectual property rights were still not protected fully ­ in­house. This strategy would let Samsung to preserve its intellectual property since mass manufacturing of legacy products with Chinese would not pose any threats to its new technologies.

This partnership may also result in a further decrease of costs by leveraging the subsidies from the Chinese government and also would lead to lower labor costs. However, while implementing this strategy Samsung should maintain its quality which is a competitive advantage of the company. In addition, the company should preserve its culture of centralized R&D by restricting  all the product development activities to its development center in Seoul, Korea. Thus, by partnering with Chinese firms, Samsung can reduce the labor costs for its low­end legacy products without worrying on its intellectual properties getting leaked. Ultimately, Samsung should remain at their current output of DRAM, but invest to increase their production of Flash. This generally follows the trend Samsung has been instating for the past few years. This general trend can clearly be seen in Exhibit 8 when Samsung decreases the percentage of the manufacturing line that they allocate to DRAM from 40% to 27%, and increase the percentage that they

give to Flash from 8% to 24% between 2001 and 2002. The table does not provide data up to 2005, but this trend should be continued because it can be seen from Exhibit 1, that with Samsung increasing the percentage of the manufacturing line allocated to Flash, there was 3653 million dollar increase. The DRAM market is becoming increasingly mature, showing only single­digit growth, while Flash memory has been tied to the rapid growth of cameras and camera phones. Exhibit 9 shows that Samsung has been able to capture a large operating profit on Flash, and alongside the rapid growth this is a very promising market for profits. Samsung needs to capture a dominant fraction of this market, and reinforce their tradition of reliability, and quality.

Summary:
Although the DRAM production seems not to be reacting to the looming influence of the Chinese,

the ongoing legacy of Samsung’s name, and trust of the consumers for Samsung’s superior product will allow them to maintain their current customers, and those that approach the DRAM marketplace. Samsung has been able to secure the spot of being  the supplier of choice for many major customers due to their quality. With this type of acclaim they have been able to charge the most for their product, and maintain the greatest operating profit, according to Exhibit 7a. Even though there has been the steady decline of prices for DRAM, Samsung has been able to obtain the lowest manufacturing cost which will allow them to remain profitable for a few more years in the DRAM market, hence the choice not to completely leave the DRAM market altogether. Despite the introduction of Chinese companies into the DRAM market, the focus needs to stay on capturing a large stake in the Flash market. It is stated that Chinese competitors are looking to learn the market from competitors such as Infineon and Elpida, but this should not be much of a concern for Samsung because Exhibit 7a shows that Samsung has an overall lower cost of production, which plays into their larger operating profit. The Chinese that enter the market will not be able to reach the same audience that Samsung has been able to capture once they enter the market due to Samsung’s brand loyalty, and sustainable higher prices which buyers have accepted as the price of guaranteed quality. 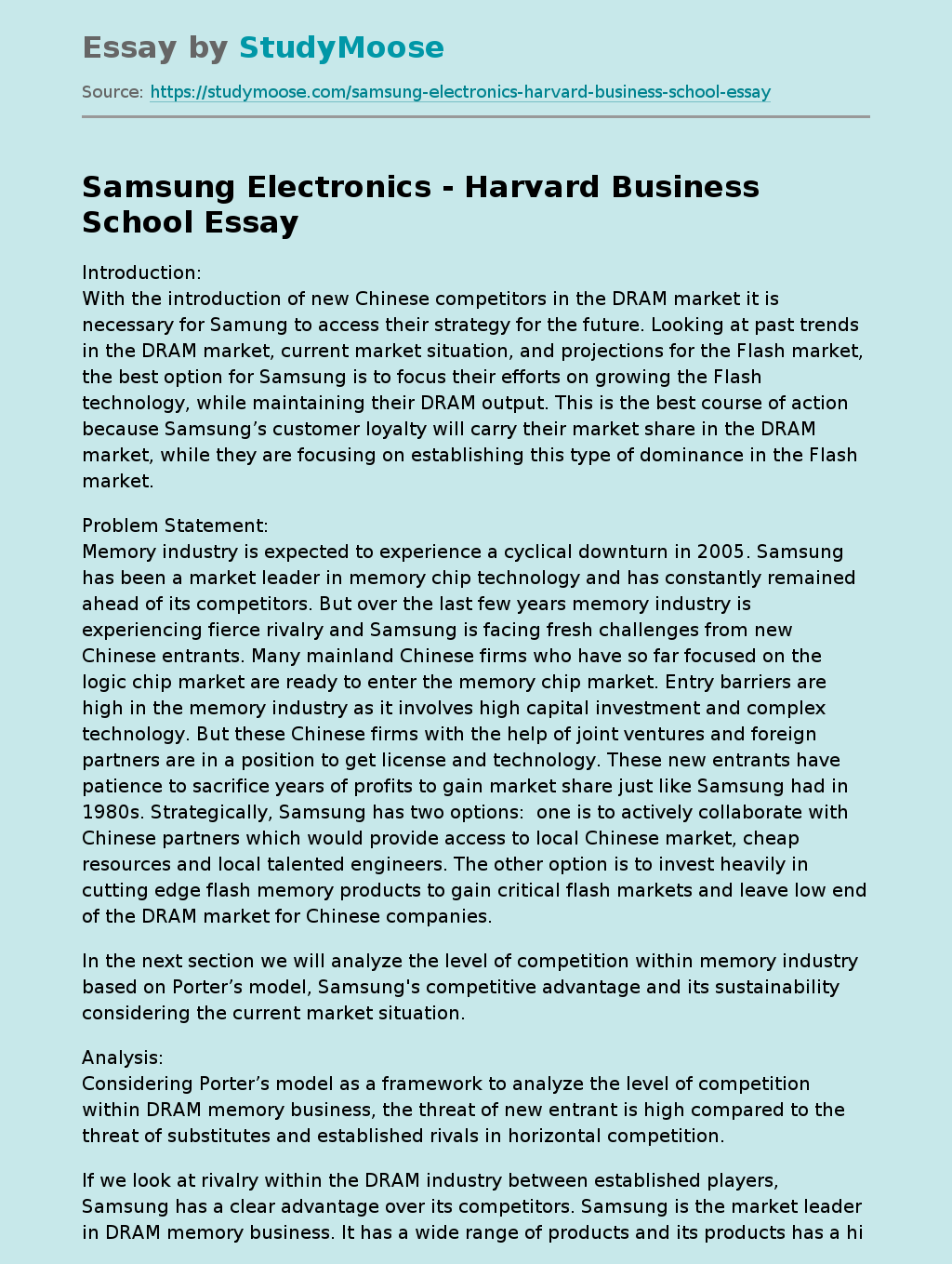