Cell phones have been called “one of the most technologically persuasive influences” over recent decades (Addo 2013). No matter where one looks, he or she can see people using their phones in one way or another. The cell phone has become an essential communication tool that is being used worldwide. According to Pew Research, “cell phones are now being used by 91% of adults in 2013” (Brenner 2013). The research also states that “56% of American adults have smartphones.” Pew Research even conducted a survey which indicates that “youth ages 12-17 put their cell phone adoption at 78% (and 37% of all teens have a smartphone)” (Brenner 2013).

Don't use plagiarized sources. Get your custom essay on
“ Positive and Negative Impacts of Cell Phones ”
Get custom paper
NEW! smart matching with writer

It is hard to imagine our lives without cell phones, but it wasn’t very long ago that they were introduced to society. The history of the cell phone goes back forty years. The first cell phone was created by Martin Cooper of Motorola. He made his first wireless phone call on April 3, 1973, to his rival Joe Engel, head of research of Bell Labs (Buck 2013).

The phone Cooper used weighed 2.5 pounds; it was ten inches long; and it had a battery life of only twenty minutes. In 1983, the first cell phone (Motorola Dynatac 8000X) was sold to the public.

The price tag for the phone was a staggering $3,995.00. Over the passing years, the size of cell phones have become smaller and the price tags for these devices have also decreased. Smart phones are the most popular type of cells phones in current public circulation. In 1983, cell phones were designed for one purpose only: to make phone calls.

In present times, smart phones are capable of performing a number of different functions. They allow users to not only make phones calls, but also to send text messages and picture texts, send and receive emails, have face-time, play music and games, and access the internet. There are new versions of phones being released yearly and the technology is growing just as rapidly. Cell phones are having an impact on society in terms of creating an informative, connected, culturally innovative society, and are also impacting personal lives of users in many ways including time use, privacy, safety and individuality. One positive impact cell phones have on society is the ability to keep in touch with family and friends.

Another is the ability to be more aware of what is happening in the world around us (by access to the internet). One of the negative impacts are the effects of texting and driving. This is especially common among teenage drivers. Another negative affect is several people are overusing, misusing, and even abusing their use of cell phones. However, when used responsibly, cell phones are a very important and necessary factor of today’s society. Cell phones have an effect on the way that individuals function in society, and while there has not been a lot of research on the effects of cell phone use, it has both positive and negative consequences (Addo 2013). Cell phones, in their short time of existence, have changed the way in which individuals are interacting with each other. Cell phones have allowed social networks and relationships to be strengthened as well as new relationships to be formed (Addo 2013). They have provided avenues for individuals to stay connected on a new level that does not depend on space and time, but is readily accessible at anytime, anywhere. 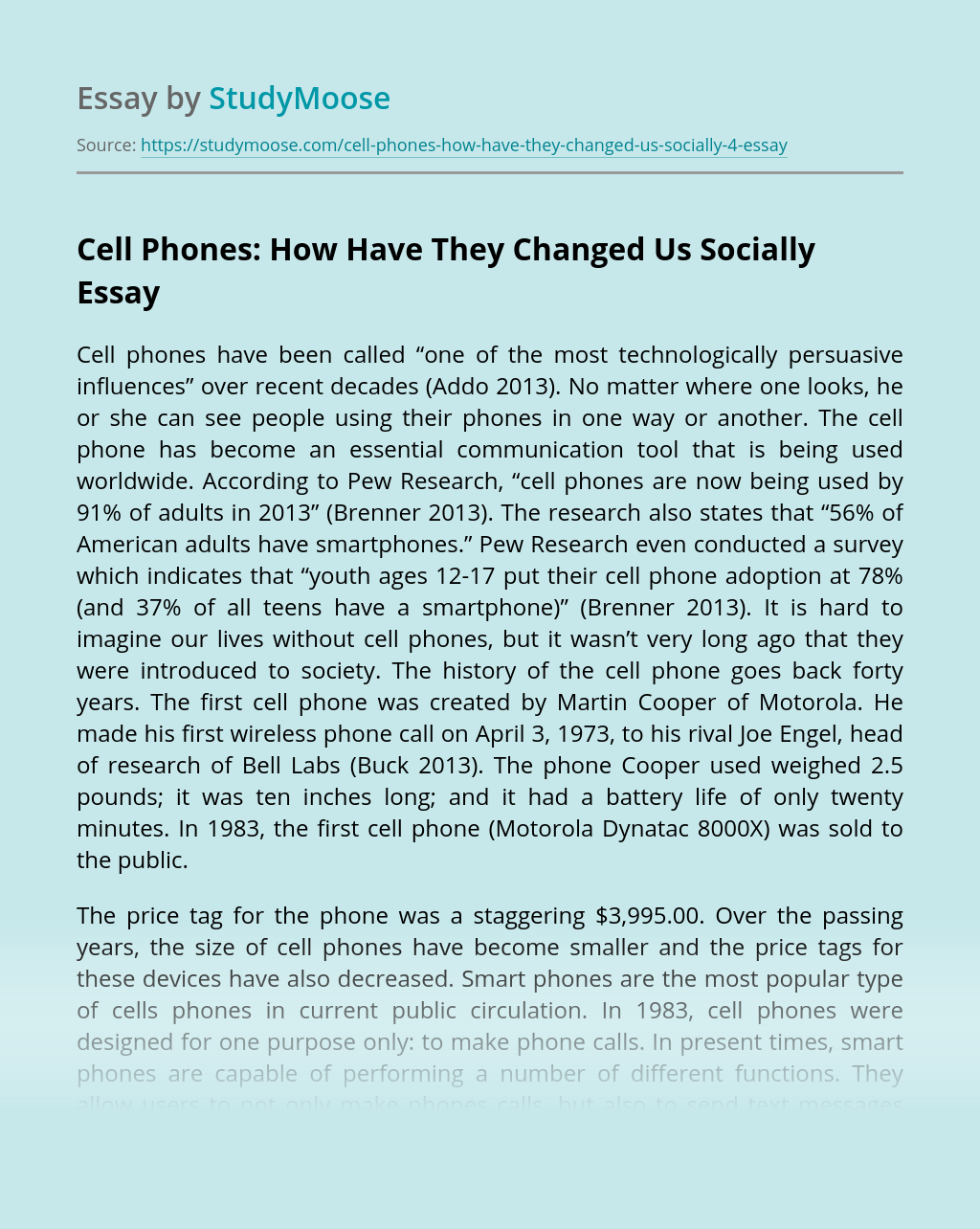