Having its roots in the Renaissance and the Enlightenment, modernism was the era of universal truth which was objectively understood and interpreted by humankind. Postmodernism, the period starting around 1950’s to present, rejects this notion of an objective and universal truth. Instead the postmodernist view of meaning is ambiguous and truth is relative to an individual or a group. Furthermore, postmodernism rejects the validity of grand narratives, such as religion, and their attempt to conceptualize existence from within a single rational and linguistic framework (“IDH”).

Don't use plagiarized sources. Get your custom essay on
“ Positive and Negative Impacts of Postmodernism Philosophy ”
Get custom paper
NEW! smart matching with writer

Both positive and negative impacts arrive from such notion. The positive impact is that the goal of an individual or a group is to build relationship with God, no matter what religion they are. Therefore, the group becomes united. For example, Mega Church in Cleveland, demonstrates the Kingdom of God in its embrace of people of all races and religious backgrounds. The negative impact is expressed through the fallible and multi-layered truth. It is impossible for an individual or a group to know the actual truth, and as a result, postmodernism undermines people’s beliefs.

The postmodernist groups reject the idea of an absolute truth, or religion, because truth is relative to the community in which they participate (Sparks). The truth is based on their experience of God by building relationship with Him.

The Mega Church in Cleveland demonstrates such an idea. “The church consists of converted Muslim, completed Jew, Irish, Italian, a large delegation of Hispanic, Caucasian, and African-American members, of all walks of life” (Mega). The church’s postmodernist character welcomes those individuals or groups who see God relative to themselves. According to Michael Summers, director of church services at Wayland Baptist University, postmodernism focus on building relationships and connections. This ideal directly affects how the church as an organization relates to the church as the body of God. Disregarding the racial and religious differences, people are willing to unite and experience the truth as it applies to them. “When it comes to choosing a church, postmodernists will search for a church that best fits them in terms of shaping relationship with God” (Park). An individual or a group seeks God not by aligning themselves with a certain religion, but through their faith and their emotions such as love for God. There is also a negative impact to postmodernism.

Postmodernism undermines people’s beliefs and distorts the actual truth. The essay Postmodernism, by Doy Moyer, explains such contradiction. According to the postmodern worldview, there are no such things as absolutes… All ideas, all actions, no matter how different from “ours,” must be accepted… One should be able to see how such a worldview is antagonistic toward those who believe in the inspiration of the Bible… To say that we must tolerate everyone, then refuse to tolerate those who don’t kowtow to the movement, is sheer hypocrisy (Moyer). It is evident that the truth is altered due to relativity and diverse ideas, views, and outlooks. Such notion undermines people’s beliefs, leaving them with no idea what to believe in. Reason is to be distrusted because there is no way to know which person’s reason is reliable. There is no such thing as objectivity. There is no “truth” to appeal to for understanding history and culture. Texts, whether religious or philosophical or literary, do not have intrinsic meaning (Beverly). Disregarding the concrete historical religious texts such as Bible and Koran, an individual or a group is left with its unreliable experiences and unsupported views. The truth, thus, becomes multi-layered and fallible.

The Mega Church in Cleveland is a great example of a positive impact of postmodernism. It unites people of different races and religious backgrounds in order to build a relationship with God. The downside is that people rely on their own experiences and ideas, since no truth is gained from religious texts such Bible and Koran. Such impact is explained in the work of Doy Moyer, called Postmodernism. Postmodernism allows people to, through personal experiences, gain knowledge and truth about God, which in process becomes relative and, at the same time, fallible. It rejects the grand narrative, religion, and its attempt to conceptualize the existence and God from within a single rational and linguistic framework (IDH). 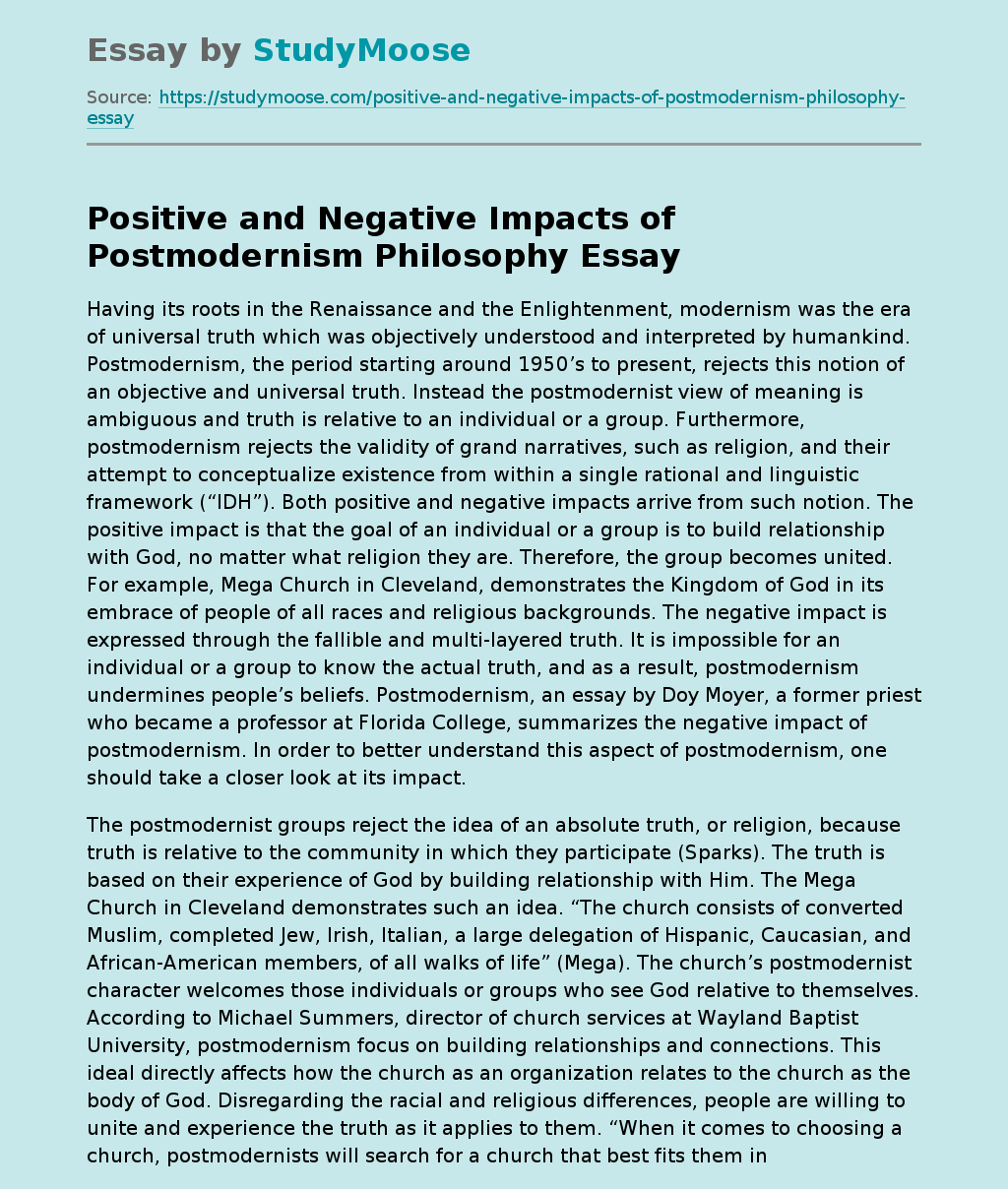