There are many hidden costs to tourism, which can have unfavorable economic effects on the host community. Often rich countries are better able to profit from tourism than poor ones. Whereas the least developed countries have the most urgent need for income, employment and general rise of the standard of living by means of tourism, they are least able to realize these benefits. Among the reasons for this are large-scale transfer of tourism revenues out of the host country and exclusion of local businesses and products.

Don't use plagiarized sources. Get your custom essay on
“ Negative Economic Impacts of Tourism ”
Get custom paper
NEW! smart matching with writer

The direct income for an area is the amount of tourist expenditure that remains locally after taxes, profits, and wages are paid outside the area and after imports are purchased; these subtracted amounts are called leakage. In most all-inclusive package tours, about 80% of travelers’ expenditures go to the airlines, hotels and other international companies (who often have their headquarters in the travelers’ home countries), and not to local businesses or workers. In addition, significant amounts of income actually retained at destination level can leave again through leakage.

A study of tourism ‘leakage’ in Thailand estimated that 70% of all money spent by tourists ended up leaving Thailand (via foreign-owned tour operators, airlines, hotels, imported drinks and food, etc.). Estimates for other Third World countries range from 80% in the Caribbean to 40% in India.

There are two main ways that leakage occurs:

This commonly occurs when tourists demand standards of equipment, food, and other products that the host country cannot supply. Especially in less-developed countries, food and drinks must often be imported, since local products are not up to the hotel’s (i.

e. tourist’s) standards or the country simply doesn’t have a supplying industry. Much of the income from tourism expenditures leaves the country again to pay for these imports.

The average import-related leakage for most developing countries today is between 40% and 50% of gross tourism earnings for small economies and between 10% and 20% for most advanced and diversified economies, according to UNCTAD.

Even in developed regions, local producers are often unable to supply the tourism industry appropriately even if good will is present: the 64-room hotel “Kaiser im Tirol” in Austria, an award-winning leader in sustainable practices, cannot find organic food suppliers in the local farming networks in the appropriate quantity, quality and reliability, as production cycles and processes are not compatible with its needs. Source: Austrian Preparatory Conference for the International Year of Ecotourism, September 2001

Multinational corporations and large foreign businesses have a substantial share in the import leakage. Often, especially in poor developing destinations, they are the only ones that possess the necessary capital to invest in the construction of tourism infrastructure and facilities. As a consequence of this, an export leakage arises when overseas investors who finance the resorts and hotels take their profits back to their country of origin.

A 1996 UN report evaluating the contribution of tourism to national income, gross levels of incomes or gross foreign exchange, found that net earnings of tourism, after deductions were made for all necessary foreign exchange expenditures, were much more significant for the industry. This report found significant leakage associated with: (a) imports of materials and equipment for construction; (b) imports of consumer goods, particularly food and drinks; (c) repatriation of profits earned by foreign investors; (d) overseas promotional expenditures and (e) amortization of external debt incurred in the development of hotels and resorts. The impact of the leakage varied greatly across countries, depending on the structure of the economy and the tourism industry. From the data presented in this study on the Caribbean, St. Lucia had a foreign exchange leakage rate of 56% from its gross tourism receipts, Aruba had 41%, Antigua and Barbuda 25% and Jamaica 40%.

Local businesses often see their chances to earn income from tourists severely reduced by the creation of “all-inclusive” vacation packages. When tourists remain for their entire stay at the same cruise ship or resort, which provides everything they need and where they will make all their expenditures, not much opportunity is left for local people to profit from tourism.

The Organization of American States (OAS) carried out a survey of Jamaica’s tourist industry that looked at the role of the all-inclusives compared to other types of accommodation. It found that ‘All-inclusive hotels generate the largest amount of revenue but their impact on the economy is smaller per dollar of revenue than other accommodation subsectors.’

The cruise ship industry provides another example of economic enclave tourism. Non-river cruises carried some 8.7 million international passengers in 1999. On many ships, especially in the Caribbean (the world’s most popular cruise destination with 44.5% of cruise passengers), guests are encouraged to spend most of their time and money on board, and opportunities to spend in some ports are closely managed and restricted.

Increasing demand for basic services and goods from tourists will often cause price hikes that negatively affect local residents whose income does not increase proportionately. A San Francisco State University study of Belize found that, as a consequence of tourism development, the prices for locals increased by 8%.

Tourism development and the related rise in real estate demand may dramatically increase building costs and land values. Not only does this make it more difficult for local people, especially in developing countries, to meet their basic daily needs, it can also result in a dominance by outsiders in land markets and in-migration that erodes economic opportunities for the locals, eventually disempowering residents. In Costa Rica, close to 65% of the hotels belong to foreigners. Long-term tourists living in second homes, and the so-called amenity migrants (wealthy or retired people and liberal professionals moving to attractive destinations in order to enjoy the atmosphere and peaceful rhythms of life) cause price hikes in their new homes if their numbers attain a certain critical mass.

Economic dependence of the local community on tourism

Diversification in an economy is a sign of health, however if a country or region becomes dependent for its economic survival upon one industry, it can put major stress upon this industry as well as the people involved to perform well. Many countries, especially developing countries with little ability to explore other resources, have embraced tourism as a way to boost the economy.

In The Gambia, for instance, 30% of the workforce depends directly or indirectly on tourism. In small island developing states, percentages can range from 83% in the Maldives to 21% in the Seychelles and 34% in Jamaica, according to the WTO. Over-reliance on tourism, especially mass tourism, carries significant risks to tourism-dependent economies. Economic recession and the impacts of natural disasters such as tropical storms and cyclones as well as changing tourism patterns can have a devastating effect on the local tourism sector.

Malta has only 380,000 residents, but received 1.2 million tourists in 1999. As 25% of GDP (and indirectly 40% ), tourism generated more than $650 million in foreign exchange earnings. Malta’s high dependence on tourism and a limited number of export products makes its trade performance vulnerable to shifts in international demand.

The seasonal character of the tourism industry creates economic problems for destinations that are heavily dependent on it. Problems that seasonal workers face include job (and therefore income) insecurity, usually with no guarantee of employment from one season to the next, difficulties in getting training, employment-related medical benefits, and recognition of their experience, and unsatisfactory housing and working conditions. 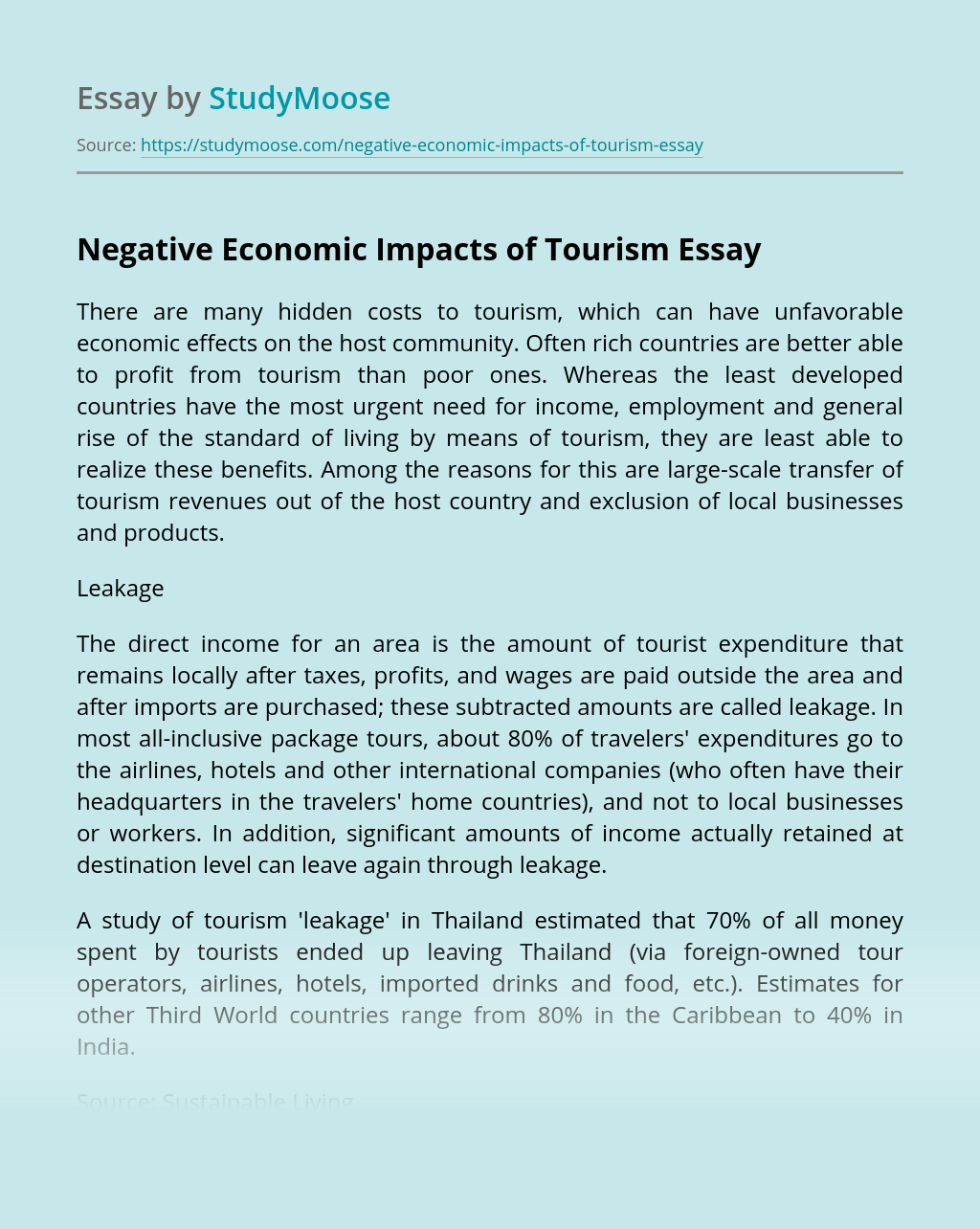