According to Merriam-Webster a cell phone by definition is a telephone with access to a cellular radio system so it can be used over a wide area, without a physical connection to a network. The cell phone has been very beneficial to humans, but at the same time, there are some negative aspects about the cell phone as well. Although the cell phone has come a very long way since when it first was invented it has also been proven to cause cancer in the brain, cause distractions in a person’s life but it can also bring people together and a cell phone could also save one’s life.

Don't use plagiarized sources. Get your custom essay on
“ Cell Phone Speech ”
Get custom paper
NEW! smart matching with writer

Without the creation of the cell phone, society would be very different. In the beginning the phones only purpose was to talk to others. This was a great invention back then because they did not have to venture out for miles after miles simply to ask someone a question. The cell phone is a proven way of bringing people together.

The advantage of calling someone up for homework help, to hangout, or simply to talk is one of the most beneficial aspects of this creation. In the olden days, folks were always stuck pondering around with their families because they did not have a means of getting ahold of anyone to develop a social life.

Although that is one great aspect of the phone, now that it has developed a lot more, it can also cause negative things in a person’s life too.

There was a time when teens had to beg to get a phone but now having a cell phone is now a trend in society, kids as young as 8 are walking around with the latest iPhones. According to Pew Internet Research Project, an online research database, in 2004 a survey showed that 45% of teens had a cell phone. Since then mobile phone use has climbed steadily among teens to 63% in 2006 and 71% in 2008.Cell phones also play a role in how students abuse their devices, it has gotten in the way of their academics. Students are so attached to their phones that they do not know how to act when their phone is not with them. They depend so much on their devices that it is almost impossible for teens to go a day without them. The phones enable bad habits such as cheating on tests, compulsive use of social media and sometimes even taking part in illegal activities.

However because the cell phone has developed so much throughout the years, it has also made life way easier. Depending on the device the phone can help you in daily tasks. Cell phones can be a learning tool for children as they can learn a new form of technology as well as explore the Internet if the phone has the capability to do so. Most cell phones allow access to the Internet, which can help people obtain answers to questions very quickly and easily. This can help with studies as well as other simple daily questions like daily weather or finding directions to go someplace new. It also allows parents and children to stay in touch. If a child needs to stay after school and needs a ride, they are able to call their parents and let them know by simply using their cell phone. This is especially important because pay phones are become more and more rare. Cell phones can be important in emergency situations as well when a parent needs to quickly get in touch with their child or vice versa.

A cell phone comes in handy very well if ever there may be an emergency. The most helpful thing a cell phone can do is having the ability to call for help if there is a car accident or someone really needs help. Cell phones have made it a long way over the past few years and are most likely going to keep having new inventions discovered for a cell phone to be able to do. Cell phones have a lot of negative and positive aspects about them and new negative and positive aspects are going to keep being discovered. Even though cell phones are able to affect someone’s life in the most amazing or horrible way, people are always going to be using them and they are most likely never going to go away, but if they did, this world would be such a different place to live in. 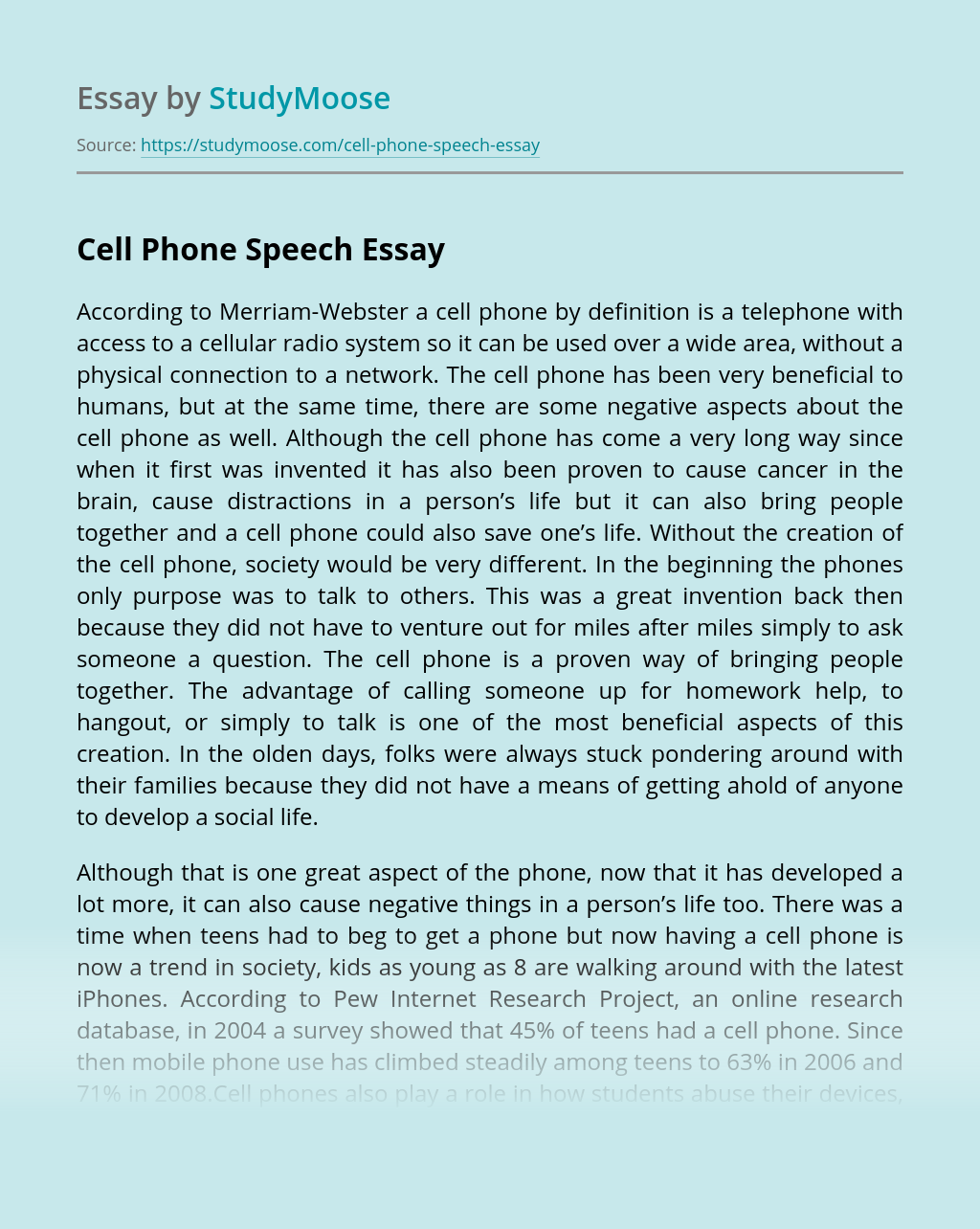