As cell phones evolve and become more accessible in daily life, scholars and educators are forced to evaluate the effects of the presence of cell phones in college classes and adapt to education in a cellular age. Studies revealed that 96 percent of students own a cell phone and nearly 70 percent of those phones have Internet capabilities. With the advent of smart phones and cell phone applications, students are more connected to the world and are bringing that connection into classrooms.

Suzanne Kurth, an associate professor of sociology at UT, studies the ways that electronically mediated forms of communication, like cell phones, are changing communication methods.

Don't use plagiarized sources. Get your custom essay on
“ The Positive and Negative Effects of Using Cell phones During Class Hours ”
Get custom paper
NEW! smart matching with writer

“I spent some time looking at our ideas within social psychology and sociology about what is the value of face-to-face communication, what makes it distinctive, and then what is it that is different about (electronically) mediated communication,” Kurth said. Kurth maintains a strict policy of not allowing cell phones in class, but all professors do not share this view.

Meeman Distinguished Professor of Journalism at UT, has a generally permissive point of view regarding cell phones in the classroom. “Every time I’ve thought about (banning cell phones in class), or tried to do it, students say ‘I’m taking notes,'” Stovall said. “It’s hard to argue against that. If they are, that’s great. ” A variety of research has been conducted recently on the effects of cell phones among student populations. Predictably, these studies show both positive and negative effects of students having cell phones, particularly in academic settings.

In a study that used text messaging to support administrative communication in higher education, researchers found that students responded positively to the method and content of the experiment. Universities across the country have implemented programs, like UT Alert, to provide students with important information. “Yeah, it’s true, the administration can readily reach people, but in cases like VPI or Northern Illinois University where we had serious assaults, people died,” Kurth said. I didn’t hear that they sent out messages. So, yes, the potential is there, but those are not explanations for having (these communication systems). ” Stovall said the key component in this issue is to know what information students want and how they want to receive it. Scholars have also examined student cell phone use and attachment to parents. Students find cellular technology helpful in adjusting to college life because it can keep them connected to their parents or control the amount of contact they maintain.

Students with strong parent-child relationships find cell phones useful because they are able to contact parents whenever they need. Other students, whose parent-child relationship is more tenuous, find cell phones liberating because cellular devices give them certain control over the relationship. “I think the students become more dependent on their parents when they have things like cell phones,” Kurth said. Kurth said that on some levels this is advantageous because it supports her believe that cell phones enable users to spend more time communicating with those they already know fairly well.

Stovall sees how individuals may have different viewpoints. “If I stay more connected with my child, he or she is less likely to make bad decisions, or get into trouble,” Stovall said. “On the other hand, the argument is they’ve got to go out there and make their own decisions at some point. ” Kurth agreed that students must learn how to function on their own in the adult world, eliminating their dependency on both cell phones and parents.

John McNair, the director of technology for the College of Communication and Information at UT, said it may be time for professors to adjust their teaching methods, to incorporate or account for the presence of cell phones. “It’s hugely difficult,” McNair said. “They have a standard way that they’ve (taught) for a long time, and it’s been successful. So (cell phones) are very disruptive to them too. All of a sudden, they’re not necessarily the expert. ” A study has been conducted on the efficacy of using cell phones to interact with large classes.

Through the use of a cell phone application, students could directly interact with the professor by sending text messages. Students responded positively to the application, because it afforded them anonymity and eliminated potential peer judgment. Kurth disagreed with this teaching technique, though. “I’m not going to be moving them forward, in a sense,” Kurth said. “I’m going to let them stay where they are, or (let them) slip back,” if she doesn’t actively seek out face-to-face participation from students.

Kurth’s main foci, in her research, are the theoretical bases distinguishing the contrast between face-to-face and mediated communication, as well as a student’s preference to send text messages rather than talk to someone. Acknowledging the potential benefits of this study, Stovall occasionally offers students the chance to use Twitter during class. This assignment is a means of earning extra credit while keeping students engaged in the lecture by incorporating the use of the Internet and cell phones. I really do want (students) to pay attention, and I want (them) to share (their) reactions to what I’m saying with other people who read Twitter,” Stovall said. “Ideally, from a professor’s point of view, you’ve got everybody’s lecture notes. ” McNair suggested that cell phones provide students with an immediate way to check facts a professor may present. “This scares the crap out of professors, because, first of all, they’re used to being the sage on the stage,” McNair said. “But now they’re just kind of another participant in a marketplace of information. “

When his colleagues express frustration over students’ use of cell phones in class, Stovall said he reminds them that these are communication channels and they have nothing inherently good or bad about them. “Most students I know, or have observed, just kind of integrate (cell phones) into their lives,” Stovall said. “They are communication channels and we use them. Some people get stressed over them. Some people say, ‘My life is so much easier. ‘” McNair, sharing Stovall’s point of view, said that things are different and that everyone must figure out how to deal with that fact most effectively.

The Positive and Negative Effects of Using Cell phones During Class Hours. (2016, Nov 10). Retrieved from http://studymoose.com/the-positive-and-negative-effects-of-using-cellphones-during-class-hours-essay 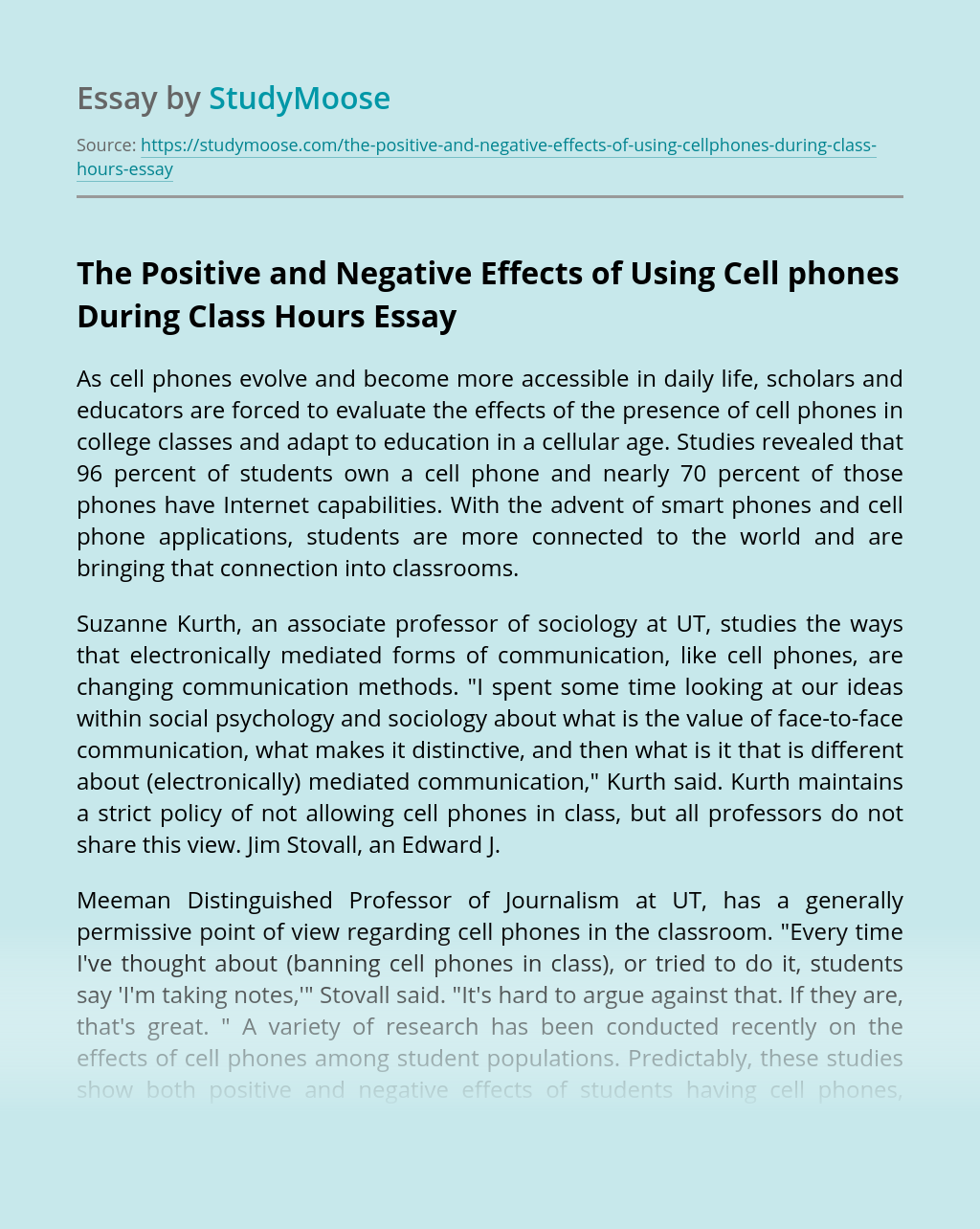