Should Cell Phones Be Banned From Schools?

Since the early 1900’s many schools have banned the use of cellular phones. These schools believed that the ban should be made for the security of the students. Most of the schools felt that cellular phones are a danger because they are used for drug dealing, bomb threats, and cause disturbance. Apparently when considering all aspects of the situation they left out the minor detail of emergencies. When the cell phone ban was made people were not fully aware that a cell phone could be the determining factor between life and death.

Don't use plagiarized sources. Get your custom essay on
“ Should Cell Phones Be Banned From Schools? ”
Get custom paper
NEW! smart matching with writer

As the September 11th attacks have taught us, cell phones have become the life lines for many Americans (“Should cell-phones be allowed in schools?”). During the attack on the World Trade Center many people used their cell phones to contact family members to speak their last words and to call people to help them out of the building. If it wasn’t for cell phones many more people would have died because they would not have been able to lead firemen and guard workers to them.

If a situation like this or one like the attack on Columbine High School were to occur cell phones would help students and faculty to make phone calls for help in time of emergency. Although some people are against the use of phones in school, sometimes it is appropriate for them to be used.

Most schools feel that cell phones are a distraction to the student, however if they are not used in classes there is no reason that they should not be allowed to be kept on.

Personally, I feel that if a cell phone remains off during class and is not used during the time when students are being educated then they should be permitted in schools. If a student needs to make a phone call they should be allowed to make it from a hallway, an empty class room, outside in front of the building, or somewhere in which they are not disrupting class. The total ban of cell phones in schools is not necessary at all times.

Although cell phones are not always used for the right reasons, not everyone should be punished for the foolishness of others. Due to bomb threats and drug dealing done by other students cell phones are banned from schools, which can put the rest of the school in danger. Officials of schools should meet together and discuss this problem because many students, parents, and even faculty believe that being able to have cellular phones in school will enhance the safety of the students.

Should Cell Phones Be Banned From Schools?. (2016, Jul 24). Retrieved from https://studymoose.com/should-cell-phones-be-banned-from-schools-essay 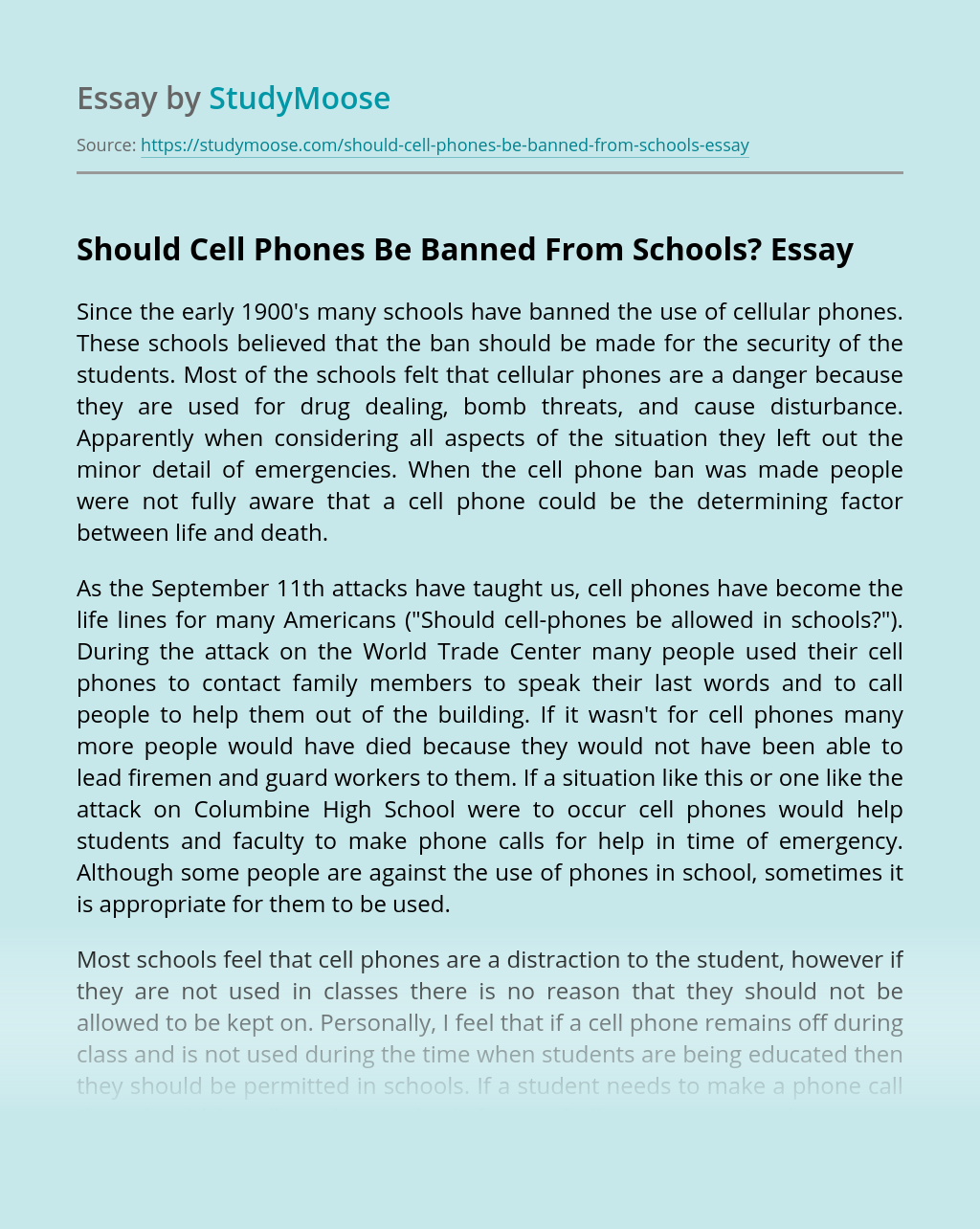