Handphones should be banned from schools

Based on my opinion, I strongly believe that hand phones should be banned from schools. This is because the detrimental effect of students’ usage of hand phones in school weighs heavier than its benefits.

Firstly, hand phones should be banned in school because students’ easily loses focus in class. Acquiring knowledge, learn something new and to educate one-self are the reasons students go to school. If learning is the priority, then what role do hand phones play in classrooms? They serve as distracters, what else? Students who use hand phones in class get distracted and distract the learning of process of the other students in class as well.

Don't use plagiarized sources. Get your custom essay on
“ Handphones should be banned from schools ”
Get custom paper
NEW! smart matching with writer

For instance, if a student’s hand phone rings, everyone’s attention is set on the student rather than on the teacher standing in the frontier of the class. Moreover, on many occasions students’ have been caught text-messaging each other in class or playing games on their phones.

Other than that, hand phones should be banned from schools because students’ tend to surf the websites in the classroom.

When the lesson is taking place in the class, students who chooses to rebel, shows complete attachment to the phone. Rather than, paying attention during the class, students surf the internet and actively interact in social medias such as Face book and Twitter. Worst still, students who use hand phones are prone to visit illegal and inappropriate websites for their age. For instance, there are chances for students to have access to pornography in hand phones.

Many students have been known to download pornographic pictures from the Internet to their phones. Adding on, students tend share those videos with their peers through Bluetooth which opens gate for social problem.

Moreover, hand phones should be banned from schools because it creates opportunity for thefts to occur. It is a norm for teenagers to display their belongings to their fellow peers. Additionally, if they own something new, latest, trendy and mostly what the others do not own. This allows the occurrence of petty thefts in school as hand phones, especially those that are expensive and have additional features that draws unnecessary attention, gets stolen. Here, the safety of students also comes into the picture. Especially students who hold their expensive gadgets are sometimes accosted and assaulted outside the school gate as they lure the attention of snatch thieves. Victims with hand phones and other valuable will most certainly have these items taken away by force when they are not aware. Who is to be blamed here?

Handphones should be banned from schools. (2016, Apr 30). Retrieved from https://studymoose.com/handphones-should-be-banned-from-schools-essay 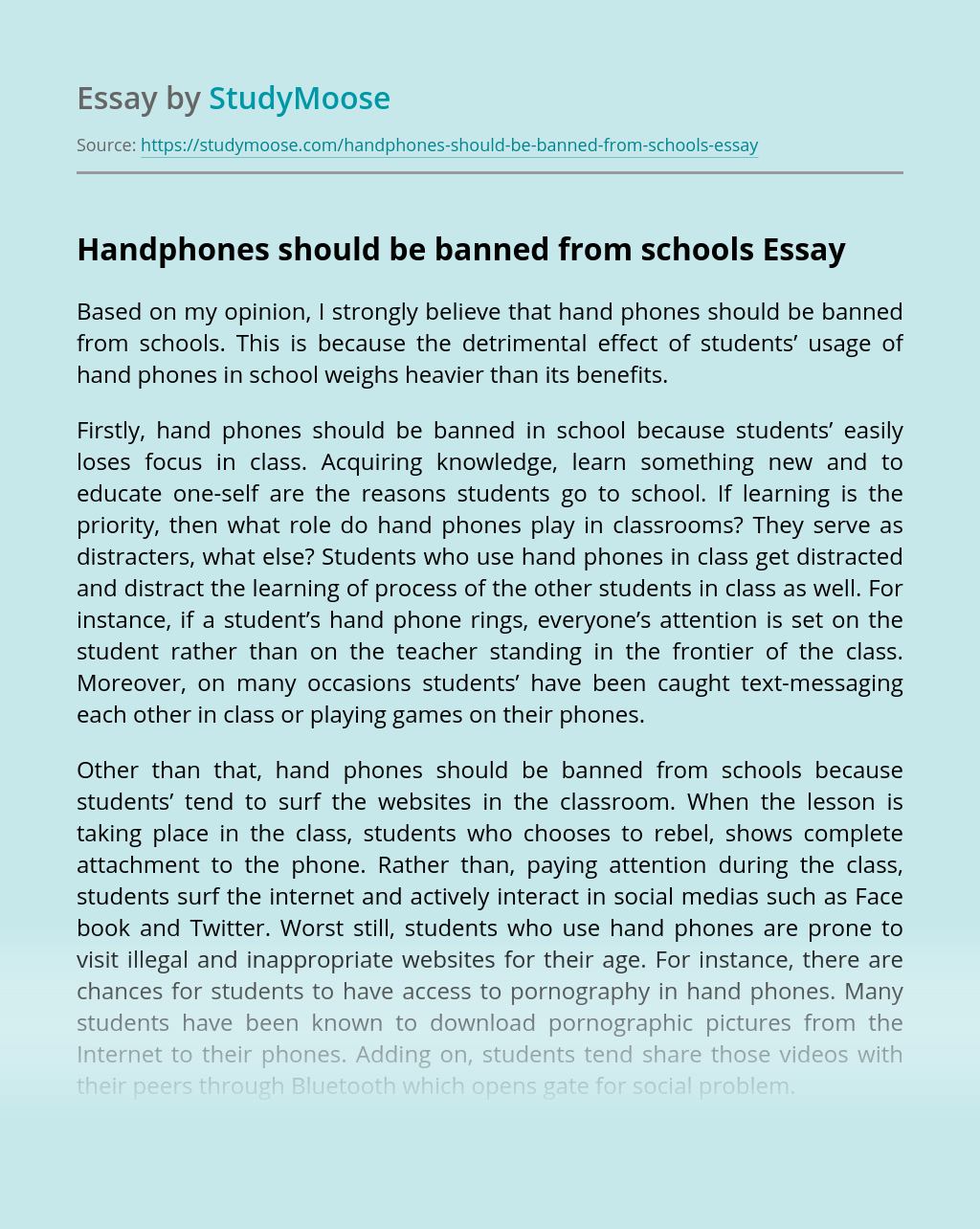