Should Boxing Be Banned: A discussion

Recently there has been a debate on whether or not boxing should be banned. There are people who agree with the idea of boxing being banned and claim that it is dangerous and life threatening. However, there are others who disagree and argue that there are more dangerous sports. This issue could lead to unexpected consequences, such as boxers having brain injuries. I believe that boxing shouldn’t be banned because it is the boxers’ choice, the boxing industry employs a lot of people and if the sport is banned it could go ‘underground.

Don't use plagiarized sources. Get your custom essay on
“ Should Boxing Be Banned: A discussion ”
Get custom paper
NEW! smart matching with writer

’ Firstly, boxing shouldn’t be banned because it is the boxers’ choice. In fact, all boxers’ choose to be boxers, not one of them are forced to. The boxers’ love to box, it’s just like you love your job (if you do), so who are you to ban something that they admire? It would be as if taking something that you admire, and love. The way boxers feel about boxing is the same you feel with something you love.

Secondly, the boxing industry employs a lot of people. Saying that, if you were to ban boxing you would be removing their jobs, and maybe even there way of money income.

Without that money, they wouldn’t have the money needed to pay bills, pay taxes, pay fees, pay for food or even afford to stay in a house. Banning the boxing industry will cause pain and stress to those people that have familys. However, there are those who believe that it is dangerous sport because it influences’ children and how they act.

These arguments are not reasonable as it is mostly the parents that influence children, not boxers, nor anyone else. Therefore it is not the boxers fault that children are watching boxers, some parents want children to do boxing for self-defence, so why blame boxing for it? The sport boxing, is known worldwide, and played worldwide. So if you were to ban it, it would not only go ‘underground,’ but it would cause more deaths and injuries without the medical support. Saying that, it would make all the matches illegal, yet they would keep it up because boxers do boxing because it’s there career and life, they would have nothing to go to. You would be taking away their lives, if you were in their shoes and boxing was banned, what would you do? In conclusion, boxing shouldn’t be banned because it is the boxers’ choice, the boxing industry employs a lot of people and if the sport is banned it

Should Boxing Be Banned: A discussion. (2016, Mar 24). Retrieved from https://studymoose.com/should-boxing-be-banned-a-discussion-essay 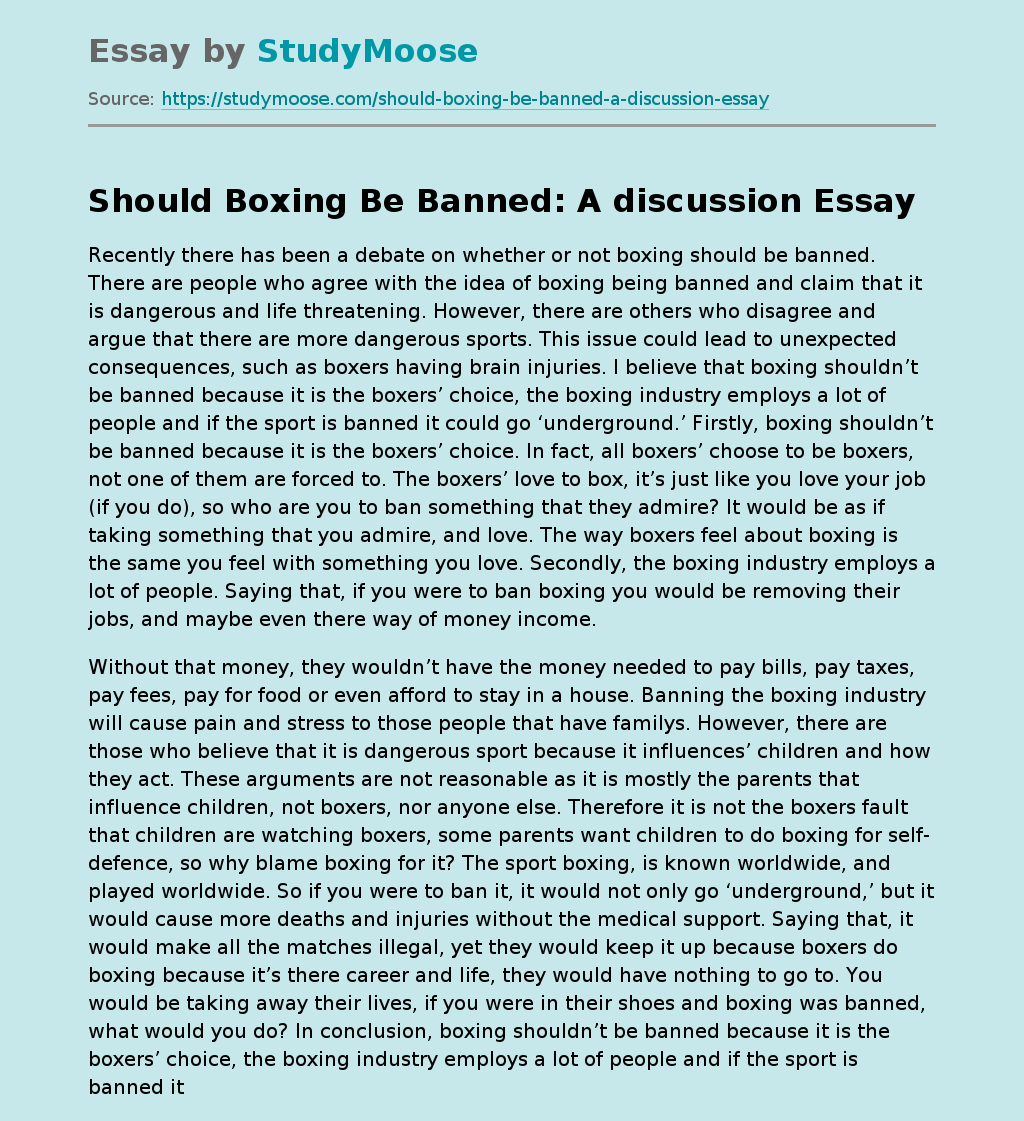