Animal testing should not be banned

For many years, animals have been used in research both in the scientific and medical fields. In order to introduce new drugs into the market, they have to be tested first on animals in order to ascertain whether they are effective or not. Animal experimentation in this context defines the use of non-humans, mostly animals, to test new drugs and consumer goods such as cosmetics, pesticides, herbicides, food additives, among others (Taylor 120). Pharmaceutical companies and research institutions have been active in animal experiments because these institutions are charged with coming up with new drugs.

Don't use plagiarized sources. Get your custom essay on
“ Animal testing should not be banned ”
Get custom paper
NEW! smart matching with writer

What has however been controversial with animal experiments is whether this procedure should be banned or not based on its ethical implications. Animal rights activists have been at the forefront in advocating for a ban on animal experiments based on the ethical issues associated with it. For those supporting the use of animals in experiments, the arguments that have been made include possibilities of medical and scientific breakthroughs, safety for humans, and accuracy of results.

Taylor (132) maintains that animal experimentation has helped in unearthing new drugs that have helped to ease the suffering of humans from disease that was once witnessed in the past. Blakemore support Taylors point by indicating that vaccines for polio and cervical cancer, insulin, antibiotics, heart-bypass surgery, among others were all advances that were achieved through animal testing. For a patient to receive therapy or treatment, it has to be known that this originated from an arduous medical research involving animals.

For instance, Blakemore uses an example of how people can easily forget the importance of animals in medical research. This is based on the fact that powerful drugs such as Avastin used to treat bowel, breast, and lung cancer were developed after research was conducted on mice. John Stein, the professor of Oxford Functional Neurosurgery Group also supports animal experiments because it helps to improve medicines and treatments (Campbell). Some countries like the UK have even realized the benefits of animal testing in advancing the medical field (University of Bradford). However, UK has banned the use of animal testing for consumer goods such as for cosmetics production (University of Bradford). Critics have however been instrumental in indicating a number of ethical implications linked with animal testing. As the critics point out, animal testing is a procedure that does not take into consideration the rights of animals.

As a matter of fact, animals are just like humans who require to be treated the way humans are treated. While supporting animal research, Taylor (120) however cites some commentators who argue that the experiment that involved testing cosmetics and other hazardous products on rabbits in order to know how long the rabbits would die was unethical. This experiment fundamentally was meant to test the level of toxicity of certain substances. As Taylor (128) echoes the sentiments of critics, this is an inhumane way of treating animals because “… the suffering of any being ought to count equally with the like suffering of any other being.” These among other critical arguments have formed the basis of the opposing side of animal testing. It may be justified to talk in terms of animal ethics when there is justification that animals have actually been mistreated. Considering that few cases have been reported regarding inhumane treatment of animals, it should not however justify the lifting of a ban on animal testing. As a matter of fact, animals have helped a great deal in the scientific and medical field which has equally improved the quality of human life.

From a practical perspective, the use of animal experiments guarantees the safety of humans. In order to ascertain whether drugs and other consumer goods are safe for humans, the use of animals becomes justified. Taylor (132) even supports this idea by indicating that very few animals are sacrificed during such experiments which help to not only save millions of people, but also animals. Opponents of this claim have however cited cases of animal suffering and deaths because of ineffective experimental procedures. Taylor (120) highlights a critical perspective regarding this issue by indicating that “Of course, Jennie was not human; she was a squirrel monkey. To do such a research on a human being would be immoral. The question then is, what justifies using a monkey?” Other commentators have also indicated the idea of injecting animals with toxins in the name of scientific advancement.

Although these arguments may seem plausible, it is however important to note that humans are practically more important than animals. It would thus be justified to assert that animal testing should not be banned. It has also been found that technological advancement has enabled results from animal testing to be more accurate with minimal harm inflicted on animals. Blakemore highlights the biological relationship that humans have with animals. According to the author, chimpanzees and some rodents like mice and rats share similar genes with humans. The way these animals respond to disease treatments is just the same as humans. Because there is no other alternative to test the effectiveness of drugs and consumer goods, the use of animals in experiments becomes justified. Blakemore reiterates that there are many incurable diseases such as Alzheimer’s, schizophrenia, and multiple sclerosis which require quick research in order to find new treatment.

Because researchers and scientists have the ability to achieve this objective, they need to use every tool available at their disposal in order to ensure that cures for such diseases are found. Critics of this argument have however maintained their stand regarding the futility of such efforts. As critics claim, some drugs have not been as effective as claimed. Indeed, some of the consumer products and drugs have had to be recalled because of ineffective experimental procedures which resulted in drugs not serving their intended purposes. It can be justified to agree to this assertion considering that animal experiments are products of human making which are subject to errors and flaws. However, with the recent advancement in technology, such cases have become rare.

Taylor (134-136) posits that there are new methods such as computer simulation which allows existing information and data to be used by researchers and scientists to further improve on what had earlier been done. Banning animal testing would in this case amount to deteriorating health standards of people within societies. Definitely, animal testing has been a controversial issue considering that there are ethical implications associated with it. While this may be true, the benefits of this procedure however outweigh the drawbacks.

For those who want a ban on animal testing to be lifted, the procedure is not ethical but only serves to infringe on the rights of animals. The arguments made by critics however are shortsighted because history clearly indicates that the drugs that people are using nowadays came as a result of animal testing. Fundamentally, animal testing should not be banned because there are possibilities of future cures being unearthed, the procedure is safe for humans, and the results have been more precise.

– approximately 5 billion animals are consumed as food annually – compared to that, only 17-22 million animals are used for in research annually – anesthesia is used today to numb the body during operations because it was successfully tested on animals => 6 % of animals do however experience pain, but this has to do with the research itself – the alleviation of pain would compromise the results => 61 % of animals used suffer no pain

=> 31 % of animals have pain relieved with anesthesia
– AIDs research relies heavily on animal testing; other testing techniques aren’t optimized yet stem cells (SC) are a relative new way to perform testing. This will decrease the use of animals in the testing process. Furthermore, SC can show a specific organ’s reaction to a substance. The housing of the animals, feeding, carrying, treatments, controlling the environment, is very expensive oFinding drugs and treatments to improve health and medicine. There are already some lifesaving medical breakthroughs that are the result of animal testing, like open heart surgery, organ transplants, effective insulin, vaccines for deadly diseases, …

Ensuring the safety of drugs and other substances

Many of the medications and procedures that we currently use today wouldn’t exist and the development of future treatments would be extremely limited.

Animals may not have the exact same philology as humans but animal testing is accurate enough to test whether a substance is even safe enough for human trials.

Experiments must only take place if there is no alternative method that does not entail the use of animals. Animals involved must be those with the lowest degree of neuro-physiological sensitivity”.

Animal testing should not be banned. (2016, May 09). Retrieved from https://studymoose.com/animal-testing-should-not-be-banned-essay 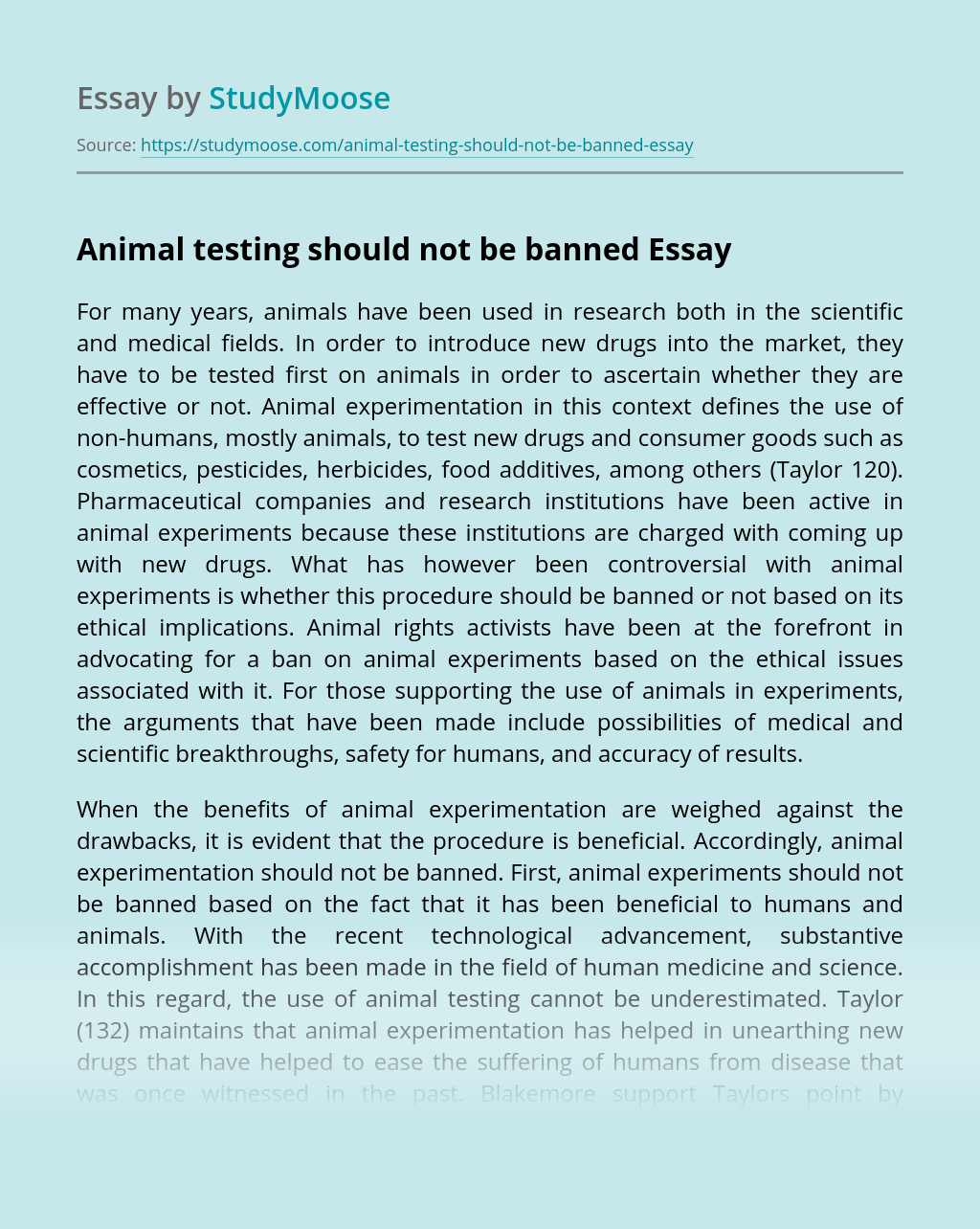