Why Fahrenheit 451 should not be banned

Dear School Board,I hope that after careful consideration and thought that the board will decide not to ban Fahrenheit 451. I understand that the book contains language that might be offensive to some people. Still, I do not think a student should be sent to a public school if they are easily offended by profanity. Fahrenheit 451 should not be banned, because profanity is already commonplace in school, it has educational content, and the book shows some scary revelations of the future.

Don't use plagiarized sources.
Get Your Custom Essay on Why Fahrenheit 451 should not be banned Just from $13,9/Page

I think that banning the book, because of profanity would be very ironic. There is an excessive amount of profanity used in public school. So parents should not send their kids to public schools if they have a problem with profanity. Also the irony of wanting to ban a book that shows a world of censorship. Colored people dont like the Little Black Sambo, so get rid of it. But if this were to happen with every book that one group of people doesnt like millions of the books would need to be banned.

Everybody is trying not to step on the toes of the dog lovers, the cat lovers, doctors, lawyers, merchants, chiefs, Mormons, Baptists, Unitarians, second-generation Chinese, Swedes, Italians, Germans, Texans, Brooklynites, Irishmen, people from Oregon or Mexico. So I think that the School Board should not ban a book just, because one group of people or one person is offended. So profanity might offend one person, but profanity is just a part of school that cannot be eliminated.

Fahrenheit 451 is a classic that can be very valuable to ones education. The book shows what can happen when people no longer have a thirst for knowledge. The people that have Harvard degrees have to hide in the wilderness like outlaws hiding from the law. They have walking camps all along the railroad where they share the knowledge that they still retain. All of the intellectuals have to hide, because they are wanted and hunted in the cities. There is something to be said of this when education has no value and it is better to know nothing and ask no questions. Students hate their teachers now, but what if they could not learn at all, they would thirst for the knowledge. The book shows what can happen when there is a lack of education.

Fahrenheit 451 shows some very scary and reasonable revelations for what might happen to the future of this country and world. Ray Bradbury talks of nuclear wars, parlor televisions, and the censorship of books. Bradbury talks of the country having two nuclear wars. Then all of the people in the city have full wall televisions that enclose them during their off time. The people in the city just sit around and watch TV, they fidget and look nervously, when the TV is off.

This shows what is already happening with kids as they come home and watch TV and play video games all day. Society is also banning books, because it offends one group of people. Schools are banning books, because they offend parents. Some of these books that are being banned have a strong literature value. When newspapers disappeared no one missed them. Only one student signed up for drama class, showing how when people dont have to go or need to get an education they dont. It is very easy for people to get sucked up in electronics and they become automatons with little emotions.

If the school board wants to ban Fahrenheit 451 they would be making an irrational decision based on one parents concern. The book has a good educational value and shows some good and bad revelations toward the future of society. To ban the book would be the exact same as burning the book.

Why Fahrenheit 451 should not be banned. (2016, Jul 21). Retrieved from https://studymoose.com/why-fahrenheit-451-should-not-be-banned-essay 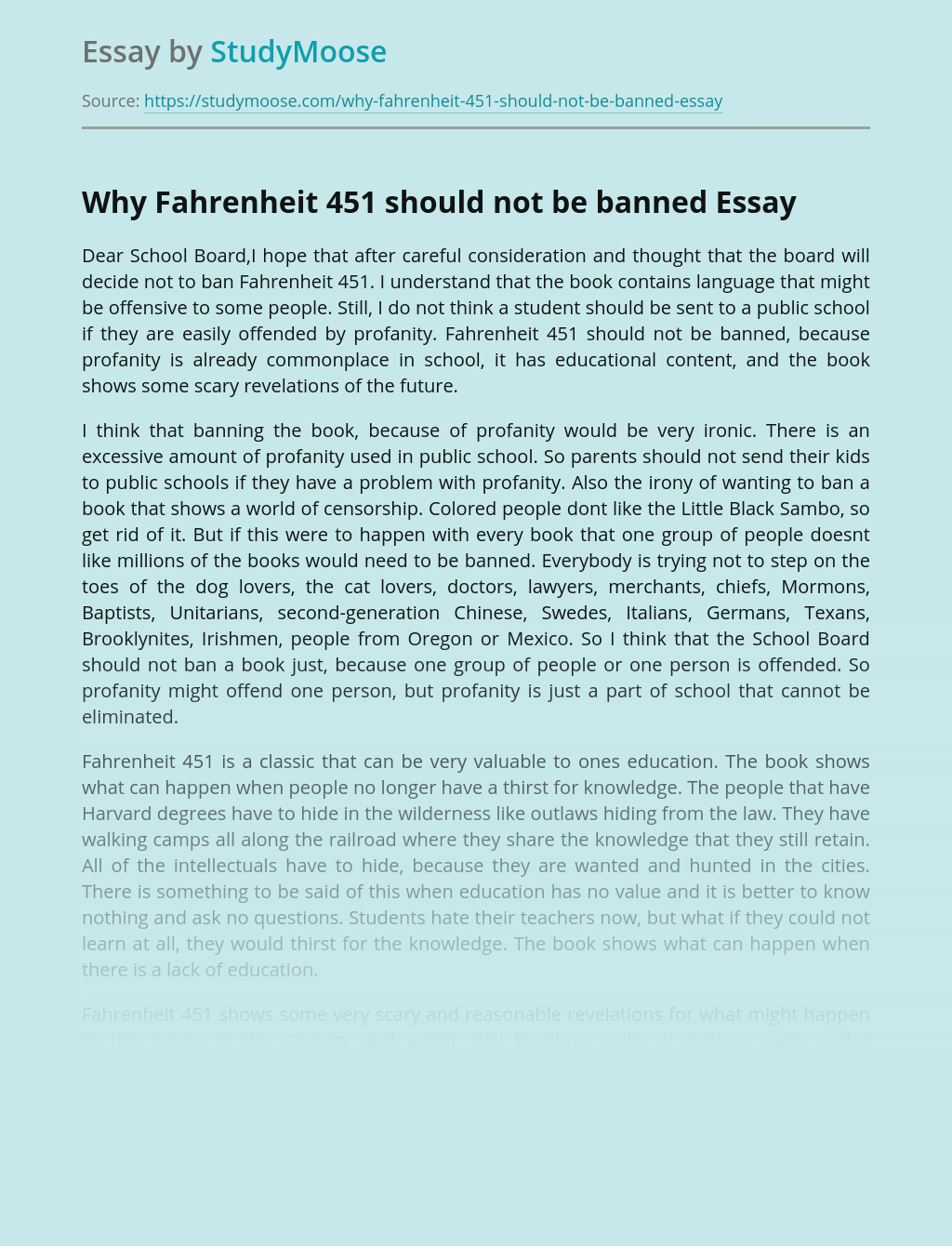 The purpose of the sections of a research article should start with a title, author, and contact information. The Abstract is next; this is a summary of the article. The summary provides an general idea of the article, which is helpful to establish if the article is significant to the reader’s investigation. An abstract will...

The study of cardio physiology was broken up into five distinct parts all centering on the cardiovascular system. The first lab was utilization of the electrocardiogram (ECG). This studied the electrical activities of the heart by placing electrodes on different parts of the skin. This results in a graph on calibrated paper of these activities....

View sample
Leigh Anne Tuohy from “The Blind Side”

Leigh Anne Tuohy from the movie “The Blind Side” embodies what it means to be a passionate, strong, and loving mother. She’s no bullshit, and it’s obvious on screen. When she speaks, she means it. She doesn’t want to raise spoiled, bratty kids; she knows better than that. When she gets tough, it’s not out...

Strategic planning can be defined as the formulation of plans that will lead to well informed and sound decisions and actions that when implemented will help achieve all short and long term organizational goals. During this process, the creation of well defined mission and vision statements along with organizational values and policies that are directly...