In his book, Fahrenheit 451, author Ray Bradbury highlights the power and importance of obtaining knowledge through books but decries the impact that technological innovations, particularly the television, pose in stifling intellectual and creative development.

As a science fiction book that was first printed in 1953, many readers — particularly literary critics and students — correlate the book to state censorship and subsequent cultural decay presaging the eras following the book’s publication.

Indeed, it can be easily gleaned from the main character’s occupation as a book-burning fireman that the book burning per se may be emblematic of  a common situation that most societies have found themselves grappling with – specific stages in nations’ histories whereby basic inalienable rights and freedoms were suppressed.

Don't use plagiarized sources. Get your custom essay on
“ Ray Bradbury’s Fahrenheit 451 – A Book Analysis ”
Get custom paper
NEW! smart matching with writer

Literary censorship, in particular, has been a recurring theme in many great works of literature. In real life, censorship is something that most governments have resorted to for varied reasons other than as a means of quelling what they categorize as rebellion or insurrection, and in almost every instance, books that echo the sentiments of many great nationalists or radical-thinking individuals have borne the brunt of censorship laws.

Some analysts point out that in Ray Bradbury’s book, Fahrenheit 451, “The book burning is not a government mandated censorship… Instead, it is a society-built degradation of the written word. Society has rejected the black and white messages bound in leather and paper” (Przybyszewski).  The author himself does not dispute this observation.

Whether it is art imitating reality or the other way around, Fahrenheit 451 is a successful attempt in making readers — including those who got to read the book generations after its initial publication — ponder on key social and political issues like censorship, even if the author himself had clarified that his novel “is actually about how television destroys interest in reading literature” (Oleck, par.

A lover of the written word, Ray Bradbury hails from humble beginnings in Illinois, which set the stage for his profound yet realistic insights, searing views and cunning overall approach to his subject matter.

He was born on August 22, 1920 in Waukegan, Illinois; studied in a Los Angeles High School in 1938, and furthered his education by working nights in the library and pounding away at  typewriter keys and selling newspapers in Los Angeles by day (“Ray Bradbury Biography”).  It can be noted that Fahrenheit 451, in many ways, pays homage to Bradbury’s Waukegan hometown.  It is in this locality that he developed an enormous and lasting appetite for books and a love for libraries, something which is continually described in his book. As Bradbury himself narrates:

From the time I was 9 up through my teens I spent at least two nights a week in the        town library in Waukegan, Ill. In the summer months, there was hardly a day I could       not be found lurking about the stacks, smelling the books like imported spices, drunk        on them even before I read them (Moran).

Based on the author’s personal narrative, one clearly sees how he obtained the characteristic ease in describing to readers a well-stacked library, and how he skillfully let some of his characters express forceful sentiments about books not just as a storehouse of knowledge and cultural heritage of nations, but as instruments to guide man in living and making decisions about the future.

Ray Bradbury’s Waukegan roots likewise armed him with first-hand knowledge and distinct style of writing about a specific subject matter as firefighters. As another writer gathering from Ray Bradbury’s musings in writing Fahrenheit 451:

Bradbury’s wary respect for fire can be traced back to his Waukegan youth, where he     would pass the firehouse on his way to and from the Carnegie Library and end up            writing down his descriptions (Moran).

Ray Bradbury’s remarkable style is indeed something which has not escaped discerning book readers and analysts. “While a lesser writer would have to content himself with beating the reader over the head with description and exposition, Bradbury is able to make his nightmare world real with economy and subtlety. The horror never grabs you by the throat as in a Stephen King novel; instead it creeps into your soul almost unnoticed” (Wright).

Content-wise, what American writer Ray Bradbury sought to impress on his readers is the fact that humanity stands to be strangled by the very forces – or trappings of modern living —  that had originally been conceived to make life better. Bradbury makes a very good point in singling out television as the piece of equipment that most people have been overly relying on, and it comes at a very huge price: a stifled intellectual development.

Indeed, of all the new modern conveniences or gadgetry the world has ever seen, one medium of communications which remains all-powerful or influential to minds and attitudes of people of all ages is the television. It is evident that Bradbury possessed remarkable foresight in ascertaining early on that people are bound to be enslaved. One of many insightful reviews about Ray Bradbury and his book states:

Bradbury’s novel — or novella, really — is an inspired criticism of what we now call      the “information society,” and the yawning chasm it is creating in our collective soul.          In it he managed to predict with frightening accuracy such current social pathologies            as the dumbing down of popular entertainment and education, our growing addiction     to empty sensory stimulation, the rise of random violence among youth, the increasing anomie and alienation among everyone (Wright).

Indeed, it takes a meticulous eye attuned to his surroundings for a writer to realistically depict current real-life situations as well as future scenarios.

One important point that Ray Bradbury stressed in Fahrenheit 451 is that most of the time, people’s enslavement, whether by societal forces or modern technological advances, do occur from their own volition or free will. “It’s ordinary people who turn away from reading and the habits of thought and reflection it encourages. When the government starts actively censoring information, most people don’t even bat an eye” (Bradbury 183).

It is true, of course, that in the present society, there are many cases of jaded individuals – especially ordinary citizens who wield little or no power to go against the powers-that-be – who initially protest but end up allowing circumstances like government  restraints on media/information to prevail or take place.  It is, however, an inescapable fact that many freedoms, like free speech and expression of ideas through books, are not absolute. This is something that advocates of censorship keep harping on.

Introspection will show that in many ways, people, during these increasingly complex times and informational bombardment, do succumb or let government impose controls as the latter may deem morally and socially and politically fit. In doing so, it becomes a clear case of the antagonist turning into an ally. In societies which do a good job of balancing interests and rights, this may be permissible. There are, however, exceptions to the rule.

There are people may rant and do nothing, but there are some individuals who even band together to form a coalition or cause-oriented group/association to bat for what they perceive as just. To their minds, the words of 18th century political theorist and philosopher Edmund Burke, of letting evil triumph if good men do nothing, may be ringing loud and clear.

Reverting to the other main issue tackled by the book, which is the tendency of people to allow themselves to be enslaved by new technology and turn away from the many virtues of reading books, this is a universal problem pervading modern societies today.

Ray Bradbury may have crafted decades ago a concise book about a dystopian society, but its message reverberates up to the present age, when gadget-toting new generations turn to books only when school requires them to, or when a bestselling book-turned-movie or escapist adult novels catch their fancy. In effect, the firemen’s task of burning books in the novel is actually a metaphor for the way a society’s citizens allow themselves, or their knowledge and future, to be stunted.  “The firemen are rarely necessary. The public itself stopped reading of its own accord” (Bradbury 87). 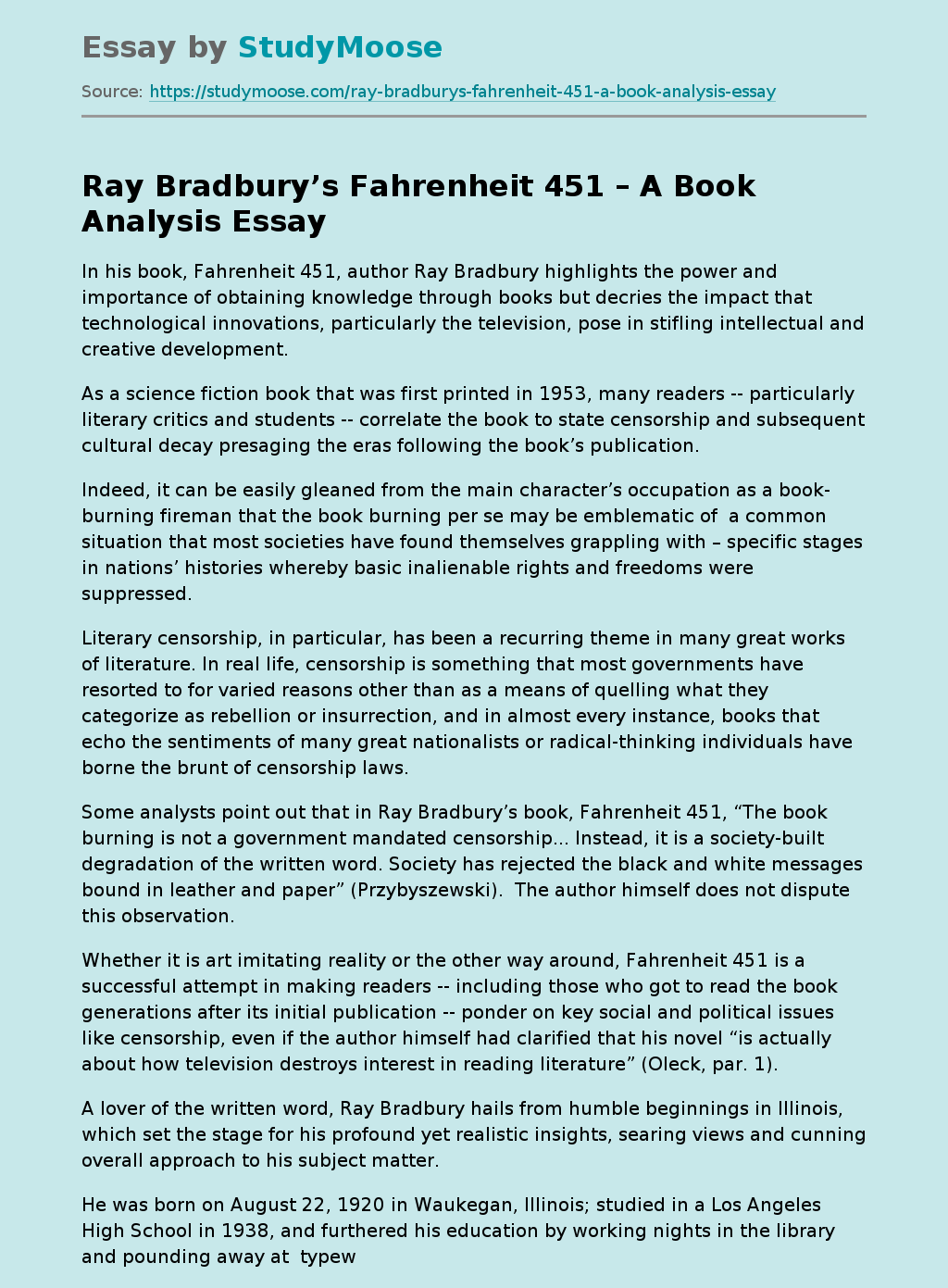