A critical analysis of Fahrenheit 451 by Ray Bradbury

Ray Bradbury’s novel, Fahrenheit 451, published in 1953, depicts a grim and also quite feasible prediction of a futuristic world. In Bradbury’s technology-obsessed society, a clear view of the horrific effects that a fixation for mindlessness would have on a civilization shows through his writing. Being carefree is encouraged while people who think “outside the box” are swiftly and effectively removed. The technology Bradbury’s society is designed to keep the people uninformed, which the vast majority of are happily and voluntarily in their ignorant state.

Don't use plagiarized sources. Get your custom essay on
“ A critical analysis of Fahrenheit 451 by Ray Bradbury ”
Get custom paper
NEW! smart matching with writer

There are many details in this novel that suggest that the future of a society obsessed with advanced technology is not only bleak but also dangerous.

Bradbury’s use of certain machines shows the emphasis his society has on thoughtlessness. For example, a commonly referenced appliance is the parlor wall. The parlor walls keep people thoughtless by blasting noise and colors at its audience, which is evident in the passage: “A great thunderstorm of sound gushed from the walls.

Music bombarded him at such an immense volume that his bones were almost shaken from their tendons; he felt his jaw vibrate, his eyes wobble in his head. He was a victim of concussion”(45). The speed of which the shows hit their viewers is so intense that one cannot think or grasp on to any sort of thought. Another key example of technology promoting a thoughtless society is the earpieces. Earpieces are small enough to place inside your ear, where, when in place, broadcast the noise from the parlor walls.

Mildred, throughout the entire novel, wears her earpieces, “She had both ears plugged with electronic bees that were humming the hour away”(18). The technology in school also illustrates how thinking for oneself and being an individual is considered both appalling and strange. Clarisse describes her school’s schedule, ‘”An hour of TV class, and hour of basketball or baseball or running, another hour of transcription history or painting pictures, and more sports, but do you know that we never ask questions, or at least most don’t; they just run the answers at you, bing, bing, bing, and us sitting there for four more hours of film teacher”‘(29). After analyzing the evidence presented, it is clear that the society in Fahrenheit 451 does not value thoughtful consideration and does not have to worry about being inconvenienced by such concerns with the use of their advanced technology.

Numerous examples of technology also suggest the threatening aspect of a society based upon advancements. The Mechanical Hound, for instance, directly shows the potential for danger. This contraption’s main purpose is essentially that of a killing machine; if someone is a menace to society, it is only a matter of time before they are exterminated. The Mechanical Hound is introduced in the novel by Montag, “It was like a great bee come home from some field where the honey is full of poison wildness, of insanity and nightmare, its body crammed with that overrich nectar, and now it was sleeping the evil out of itself”(24). Montag’s description of the Hound introduces his concept to the readers that although a robot is not human and, therefore, cannot be evil; there is still an ominous characteristic looming about the Hound. However, Bradbury’s society is also a great danger to itself. An example of this would be people driving in their jet cars.

The setting of Bradbury’s novel is at a time of war; bombs are dropped onto the society that once was home to Montag, “Perhaps the bombs were there, and the jets, ten miles, five miles, one mile up, for the merest instance, like a grain thrown over the heavens by a great sowing hand, and the bombs drifting with dreadful swiftness, yet sudden slowness, down upon the morning city they had left behind”(158). Undoubtedly, these bombs are a sinister and dangerous progression for technology. Bradbury’s society has many reasons to feel threatened by the advancements of its world.

However, feeling threatened is impossible for a society that is founded on the principals of apathy. The people are carefree, which is encouraged by the government. How can a society with no worries rise up and rebel? The government obviously has the advantage of manipulation, which is carried out by their technology. Clarisse has an appropriate way of describing the bleakness of a society that doesn’t care, ‘”I sometimes think drivers don’t know what grass is, or flowers, because they never see them slowly,” she said. “If you showed a driver a green blur, Oh yes! He’d say, that’s grass! A pink blur! That’s a rose garden!”‘(9). The uneasiness Clarisse feels for the way people behave in her time depicts how people do not take the time to enjoy the smaller parts of life because nobody in this society cares. Another machine that proves the threat of a technology-obsessed society is the need for the stomach pump. Bradbury mentions early on in the novel that people often overdose on sleeping pills, not purposefully, but because they pay so little attention to the amount of pills ingested, overdosing is extremely commonplace.

Mildred, at one point, swallows too many pills, Montag describes the machine used to pump her stomach, “They had two machines, really. One of them slid down your stomach like a black cobra down an echoing well looking for all the old water and the old time gathered there”(14). The need for a piece of technology like the stomach pump in this novel, only further supports the evidence of technology showing the threatening effects of a carefree society. Another advancement designed to accommodate the need to have no worries all the time would be the incinerator Beatty speaks about to Montag, ‘”Funerals are unhappy and pagan? Eliminate them, too.

Five minutes after a person is dead he’s on his way to the Big Flue, the Incinerators serviced by helicopters all over the country. Ten minutes after death a man’s a speck of dust”‘(60). Beatty confirms the severity of the level of apathy in the fact that his society is so concerned about being unconcerned that technology must do all of the dirty work. A society, which has all the technology to take care of such inconveniences, would and, by using Bradbury’s novel for verification, does make a society carefree, which has been proven time and time again to be an incredibly threatening outcome.

Several fine points of the novel portray Bradbury’s implication that a society founded on the need for advanced technology is doomed to lead a bleak and dangerous existence. Examples of technology promoting a brainless society are abundant throughout the entire book. Even more technology illustrates the hazards and harmful aspects of these technological advancements. When both the developed machines that encourage thoughtlessness along with the destructive technology of the future are considered, one can plainly see that the worst advancements of all of those of which show the grim and threatening effects of a carefree society. Possibly the most uncanny feature of reading Bradbury’s novel is the fact that, realistically, our society has been working up to a technology-obsessed way of life for quite some time, and our impending future could very well be a mirrored image of Fahrenheit 451.

A critical analysis of Fahrenheit 451 by Ray Bradbury. (2016, Jul 07). Retrieved from https://studymoose.com/a-critical-analysis-of-fahrenheit-451-by-ray-bradbury-essay 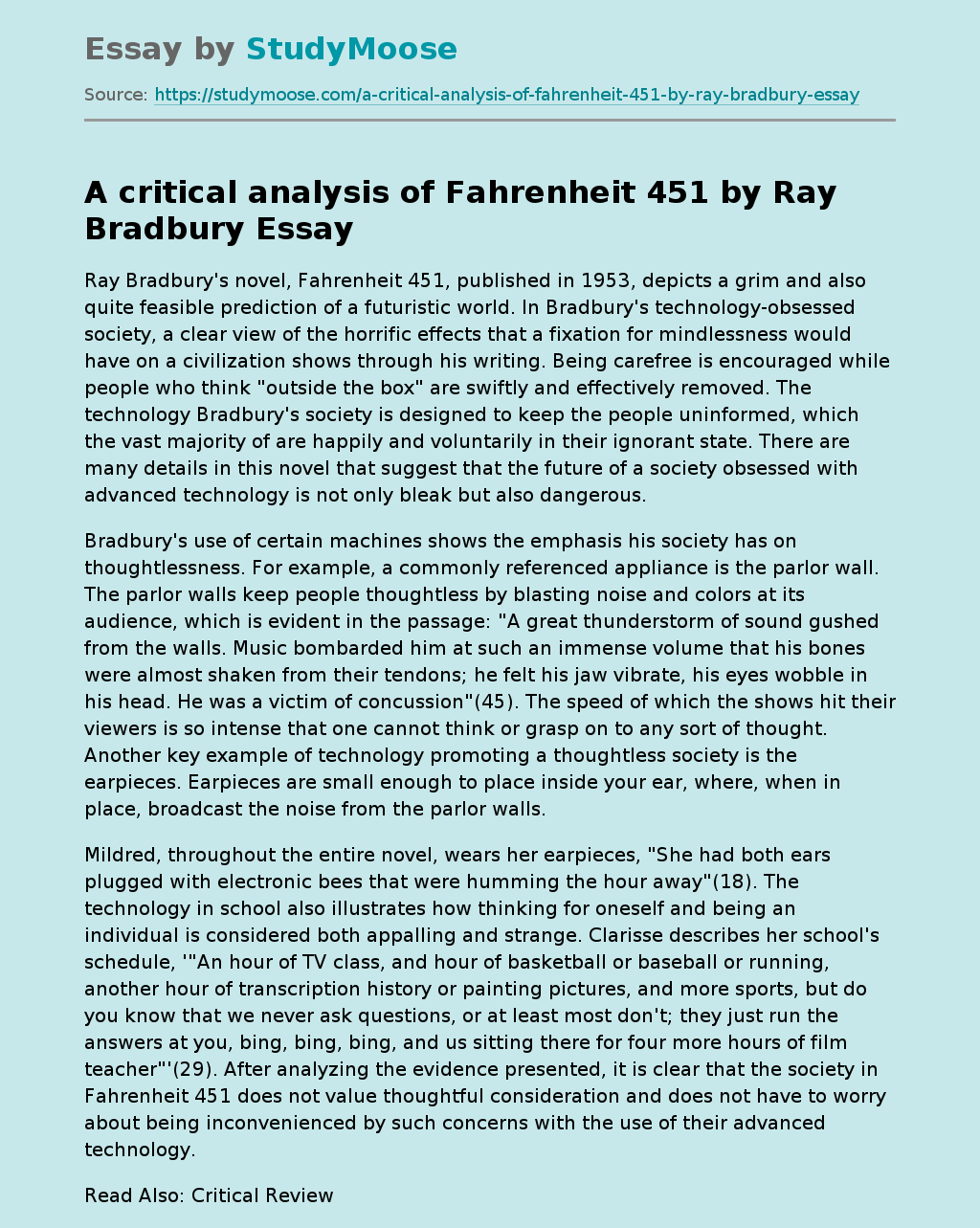