Animal Testing Should Be Banned

The activity of animal testing is of cruelty and sometimes unscientific. Money spent on animal experimentation is wasted in many cases; due to inability in obtaining accurate results, and all this at the cost of the animals’ well-being. Here are a few arguments against animal testing that support the thought of banning this activity.

Cruel Practices Animals are a soft target for human beings; it is however, not fair to take undue advantage of their helplessness. It should be understood that a monkey or a mouse would experience the same amount of pain that human beings would do, on being made to undergo certain painful procedures.

Animals used for testing are often deprived of food, water and sleep. In many cases they are treated cruelly. For example, dogs are locked in gas chambers to test whether a particular insecticide is safe for inhalation by human beings. Most often, anesthesia is not used at the time of testing. A callous attitude towards the safety of animals is one of the main reasons for not using anesthesia when experimenting on animals.

Another reason for avoiding the use of anesthesia is the claim that test results get altered on doing so. But imagine being operated on, without anesthesia or being jammed in a cell just because someone else wants to know how your body reacts to that particular environment. And you will realize what pain those innocent animals must be undergoing when such experiments are conducted on them.

Fast Fact: Countries like New Zealand and Netherlands have banned the use of great apes and other primates for the purpose of testing.

You can read about it following link argumentative essay examples.

Inaccurate Results The results obtained from animal testing are used to check whether a particular medicine or cosmetic would have any side-effects on human beings. The body systems of animals are different from those of human beings. Aspirin is widely used for the treatment of fever, pain, inflammation, etc. in human beings. However, this very medicine proves to be toxic for mice. Most experiments are conducted on animals which cannot be reliable sources for predicting results on human beings. That is, mice or rats are not the correct means to speculate reactions in human beings, while only monkeys and chimpanzees are; they being closely related to humans. Many of us don’t know that drug companies are not held responsible for illnesses or the side-effects of their medicines or vaccines, but it is a fact that many newly tested medicines they proudly sell, actually fail to give positive results. The side-effects of drugs like thalidomide and clioquinol are testimony to the claim that medicines tested on animals cannot be considered safe for human use. Therefore, it is not correct to fully rely on results of tests conducted on animals.

Fast Fact: According to the National Institute of Health (NIH), most of the vaccines (HIV/AIDS) that passed animal tests, actually failed in trials conducted on human beings.

Costly Affair Rearing animals for the purpose of testing requires a lot of investment on feeding and fulfilling their needs. Animals used for testing require to be fed certain amounts and types of food, depending on what they are being tested for. They require to be provided with shelter for the period for which they are experimented on. Plus, there are huge expenses incurred in creating artificial environment for the experiments and in conducting the tests on animals. John McCain, a politician from USA has deemed the practice of animal testing as ethically, scientifically and financially unsound. Animal testing statistics show that thousands of dollars are spent every year on animal testing and the activities cost the lives of millions of animals.

Fast Fact: According to Lexington Herald-Leader, a reputed media network, millions of tax-payer dollars are wasted on drug tests involving animals and they are pointless.

There are Alternatives… In today’s world, there are many alternatives to animal testing, which is one logical reason why animal testing should be banned. Tissue culture methods, for example can be used as alternatives to animal testing. Crash test dummies (test devices which mimic humans) have internal sensors, and can be used for experimentation instead of torturing living animals. Monoclonal antibodies can be created with the help of cultured cells. Tissue engineering techniques can be used for culturing these cells. It is also possible to make a model of the human immune system in order to check whether a particular vaccine is effective or not. Such models are referred to as Modular Immune In Vitro Constructs (MIMIC).

Fast Fact: Russell and Burch first developed a 3-Rs system that is based on the principles of finding alternatives to animal testing. It stands for Replacement (using non-animal methods for experimentation), Reduction (using lesser animals to obtain more information) and Refinement (refining procedures so as to reduce the pain and discomfort involved.

The practice of animal testing should be banned, considering that it is harmful from the ethical, environmental as well as the economical point of view. Making use of alternatives that are available for animal experimentation is therefore, a better choice. It is only by means of a responsible and compassionate behavior towards animals that we can be called true ‘human’ beings. Progress in medicine is essential, but not at the cost of innocent lives. As Mahatma Gandhi rightly said, “You can judge a nation’s moral progress by how it treats its animals.”

Animal Testing Should Be Banned. (2016, Nov 02). Retrieved from http://studymoose.com/animal-testing-should-be-banned-essay 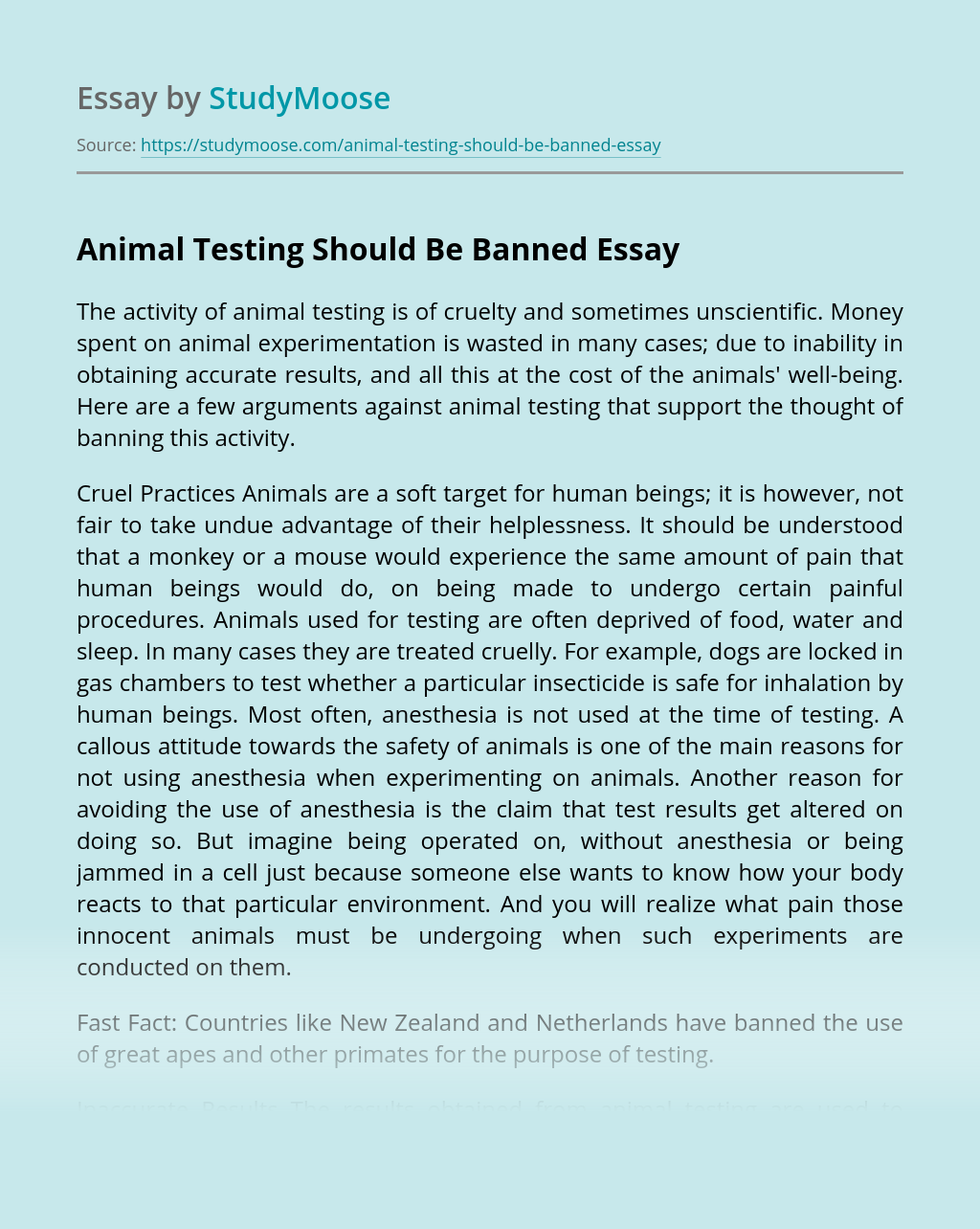 Don’t waste time
Get a verified writer to help you with Animal Testing Should Be Banned
Hire verified writer
$35.80 for a 2-page paper
Stay Safe, Stay Original