How many people have your lipstick and mascara killed? Luckily, most makeup is tested on bunnies, cats, dogs, guinea pigs, and monkeys so there is no need to worry about that. Eminent cosmetic companies such as Maybelline, Sally Hansen, Neutrogena, and Cover Girl test their makeup products on animals. Companies use cosmetic testing as a defense to avoid law suits in case anything happens. Even Dove tests on animals which led to the death of its trademark. It’s unfortunate, but it’s so that we know your lipstick will not suddenly murder you.

Cosmetic testing on innocent, living organisms is justified since they do not have any feelings and emotions at all. The European Commission’s Scientific Expert Committee has been spreading rumors by saying, “The safety of a product can be determined by knowing the ingredients.

” Anyone who has common sense can tell that this is a lie. How can one possibly tell if an ingredient is safe is it is not first tested on a mouse or rabbit? The tests that are done on animals allow them to gladly take death when it comes. For example, monkeys have been seen trying to commit suicide in their cages after surviving a series of cosmetic tests.

Also, rabbits are kept in cases that secure their necks so when they squirm away from the scientists trying to put substances in their eyes, they twist so hard that they wring their own necks. Cosmetic testing allows the insignificant animals to actually be of use so that you can safely put on your concealer.

Beauty shops, like Bath and Body Works, sell lip gloss, hand sanitizer, lotions, shampoo, perfume, etc. and they do not rely on animal testing. Most animal tests are conducted on rats and mice. Although, most of the data that scientists gather from them is useless, since their bodies are different from human bodies, it is still necessary because their tests are able to help the cosmetic companies boost their confidence. Rodents take up about 90% of the animals that get tested on because they are cheaper than other animals and testing companies don’t want to invest money in better solutions. Diana Shuster, a student at the University of Washington said, “I test on about 20 mice a month.” This only adds up to about 240 mice a year for one person. Everyone despises rodents anyways so cosmetic animal testing is a good way to put them down.

Animal protection groups like American Society for the Prevention of Cruelty to Animals (ASPCA) and People for the Ethical Treatment of Animals (PETA) are wasting their time protesting about an issue that does not exist. They have infamous reputations for being radical in their views. The biggest change they have managed to get was to stop cosmetic companies like Avon and Estee Lauder from animal testing for two decades. Fortunately, for customers, they went back to animal testing because they were using chemicals that were too expensive.

This was because the chemicals were nontoxic, but cost more money so the companies decided to go back to using harmful chemicals that cost less. However, harmful substances need to be tested on animals so that companies don’t get sued. These companies go through such a hard time just to make sure that everyone can look good. The non-testing companies are clueless when it comes to pleasing the customers. How can they possibly think that buying more expensive but safer products would be a good idea?

Overpopulation in animals has been a major issue. Animal breeders often send their animals to shelters that are already overflowing with pets. These unwanted animals are given to testing centers to be used as guinea pigs in experiments. (Sometimes literally). The solution to overpopulation is clearly to kill and abuse animals through cosmetic testing. I can glean that companies still go on with cosmetic testing even though there is no need for it. This is because it is a good way to solve overpopulation, companies can save money, and it can be used to prove that it was not the company’s fault if you accidently stab yourself in the eye with your mascara wand since they already tested it on the rabbits. It is apparent that cosmetic animal testing is the smartest way to guarantee that your lipstick and eye shadow will not kill you.

Works Cited
Murnaghan, Ian. “Animal Testing on Cosmetics.” AboutAnimaltesting. AboutAnimaltesting, 29 Oct. 2014. Web. 5 Nov. 2014. This article is talking about now Cosmetic animal testing in banned in the UK but still prominent in countries like the United States. It says that there is controversy over this kind of animal testing because animals have to suffer and die just so that humans can be aesthetically pleasing to look at. The author says, “They do not, however, support animal testing for cosmetics [as opposed to medical testing] because the cost to the animals doesn’t justify the research, which is really about enhancing appearances for humans.” The audience could be anyone but targeted mostly towards women to inform them on this issue. This article supports my article but arguing against cosmetic animal testing. ProCon. “Animal Testing – ProCon.org.” ProConorg Headlines. ProCon.com, 29 Jan. 2014. Web. 05 Nov. 2014. This website is a list of pros and cons for both sides of the story. It also gives an overview of the situation. It says, “An estimated 26 million animals are used every year in the United States for scientific and commercial testing.” The author seems to be someone who is very knowledgeable in this field. The audience this time is everyone because it gives both sides of the story. It helped me decide what side I should argue for, while still being knowledgeable about the opposing side. WordPress. “Animal Welfare and Ethics on Cosmetic Testing » Pros and Cons.” Animal Welfare and Ethics on Cosmetic Testing » Pros and Cons. UBC, 2007. Web. 05 Nov. 2014. This article is similar to the one above except it talks about the advantages and disadvantages on both sides of cosmetic testing while the one before looked at testing as a whole. This one was more useful because it fit my topic specifically. This author also seems knowledgeable in this field. He targets mostly women because he focuses on makeup to inform girls on this issue. 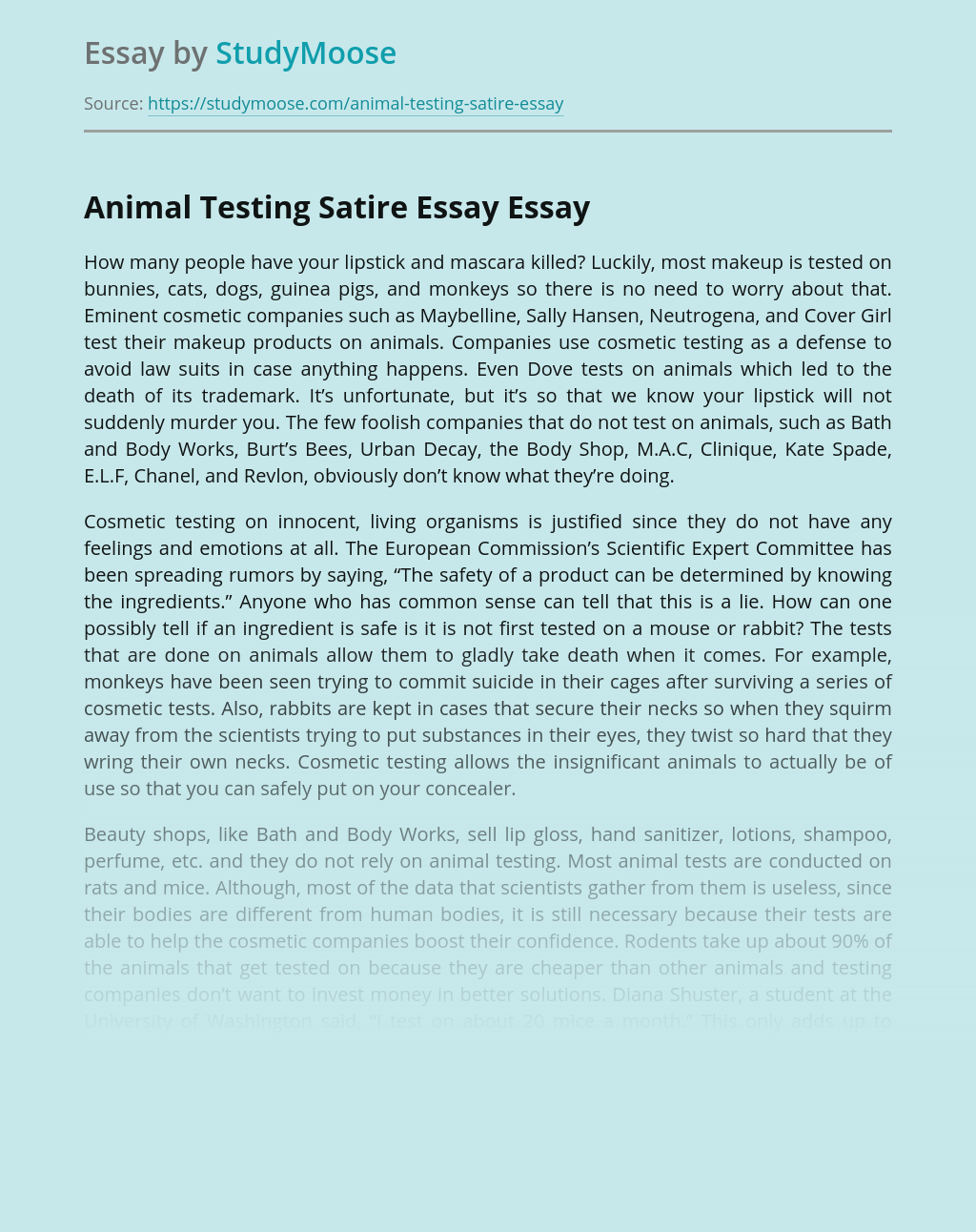 Why Animal Testing is Wrong

*Intro* Every day, locked inside cold, desolate cages in laboratories across countries are millions of rats, mice, rabbits, cats, dogs and other animals receiving intentionally caused pain and ache with loneliness and fear. *Facts* More than 100 million animals every year suffer and die in cruel chemical, drug, food and cosmetic tests. To test cosmetics,...

At first, thank you for the people who are here to listen to my speech. I’m honor to be here so that I can express my strong argument in this place. Before beginning my speech, I want to ask you a question. It’s a short question, but not simple. Please think carefully. Is there the...

As citizens of the United States we are entitled to our civil rights. They include our basic needs for living a happy and safe life. Animals however are not entitled to any rights to ensure them safety, good health, and proper living conditions. Animal testing laboratories torture and kill innocent animals daily. The laboratories smell...

For many years, brand-new items have actually been validated. These products include medications, cosmetics, and so forth. People gain from these items however how were these items yielded and at what expense? Animals are being tortured for info for the advantage of humanity. They are being kept away not only from nature however likewise from...

Animal Testing Should Be Banned

The activity of animal testing is of cruelty and sometimes unscientific. Money spent on animal experimentation is wasted in many cases; due to inability in obtaining accurate results, and all this at the cost of the animals’ well-being. Here are a few arguments against animal testing that support the thought of banning this activity. Cruel...

Animal testing is cruel and inhuman! It is morally wrong to toture animals for our own benefit. Over 3 million animals have been tormented all in the name of research. It has been found that only 5-25% of side effects caused by medicines are accurately predicted. This leads me to wonder what is actually being...

To persuade the audience that animal testing is only ok if it is used for medical purposes only. Outline I. Introduction: A. Attention-getting device: Do you know anyone that has or had cancer? Or some other deadly disease? These diseases could be cured with a little more research and experimenting. How about painkillers? Have any...

1.0 Introduction The Greeks believed that animals were a lesser form of life because animals could not think like humans did. Furthermore, this thought was continued by Christians who claimed that animals were less significant because they had no soul (Vivisection, 2002). Animal testing is the use of live animals for research in order to...