Did you know that in 2008 in New Zealand there were more than 341,000 animals used for research, testing and teaching? Animals are being used from all over the world for animal testing that ranges from drugs to our simple everyday shampoo. Almost every medicine, or treatment you have ever used has been tested on innocent animals for your benefit.

WHAT HAPPENS TO ANIMALS IN ANIMAL TESTING?

Every year, millions of animals suffer and die in painful tests to determine the “safety” of cosmetics and household products.

Turn in your highest-quality paper
Get a qualified writer to help you with
“ Speech Animal Testing ”
Get high-quality paper
NEW! AI matching with writer

Substances ranging from eye shadow and soap to furniture polish and oven cleaner, they are tested on rabbits, rats, guinea pigs, dogs, and other animals, despite the fact that test results do not help prevent or treat human illness or injury. The animals spend their lives in barren cages, unable to make choices or express natural behaviors. Most never experience fresh air or sunshine, only bars and concrete. Those few facilities that provide some outside caging typically rotate the animals, giving them limited and infrequent amounts of time outdoors.

Standard lab conditions, such as small, crowded cages, lack of enrichment, loud noises, and bright lights out of sync with natural lighting are all known to create stress in animals who in turn show physical symptoms of the stress.

WHAT COMPANIES USE ANIMAL TESTING?

Most companies test on animals, did you know that the Mars Candy Company test on animals? Most of you would have heard of these products Cover girl,Dove, Garnier , Lancôme , Listerine , Maybelline, Pantene , Vaseline , Lipton.

All of these products have one thing in common , they all test on innocent animals.

I have two cats at home that I absolutely love, and would never want to see them get hurt, or see something bad happen to them. Most of us all have pets at home, and if we don’t, we definitely know someone that has a pet. Could you imagine seeing your pet get tortured by having plastic tubes put down there throats and having drugs put inside of them then after that they get killed and dissected for your own sake? Animal testing has become the sole method to testing products and medications prior to human use.

Scientists often argue that animal testing is necessary for researching for new viruses. This experiment is usually when scientists purposely give viruses to animals. So, that once there virus is in the system, they can work on the treatment. According to About Animal Testing there are other ways to find cure to viruses. There are new testing methods like vitro testing. Scientists have replicated human skin and test skin products on this replicated human skin, this method is called vitro testing. There is another method which is a computer program. This computer program takes the information from the drugs or virus and it calculates the effect of these drugs or viruses on human being. The program also calculates effects on different age groups and different genders. These methods are much more accurate then animal testing and cost a fraction of the amount. But still animal testing is costing us more money and less accurate results. Scientist should really try more alternative methods and work on them. So, animals can live there life span with freedom.

In conclusion, animal testing is not reliable and is very expensive. Animal testing is inhumane and now that there are alternatives to this, there is no excuse for anyone to still commit this act. I suggest that governments fully ban animal testing, so that the world becomes a better and safer place for both animals and humans. 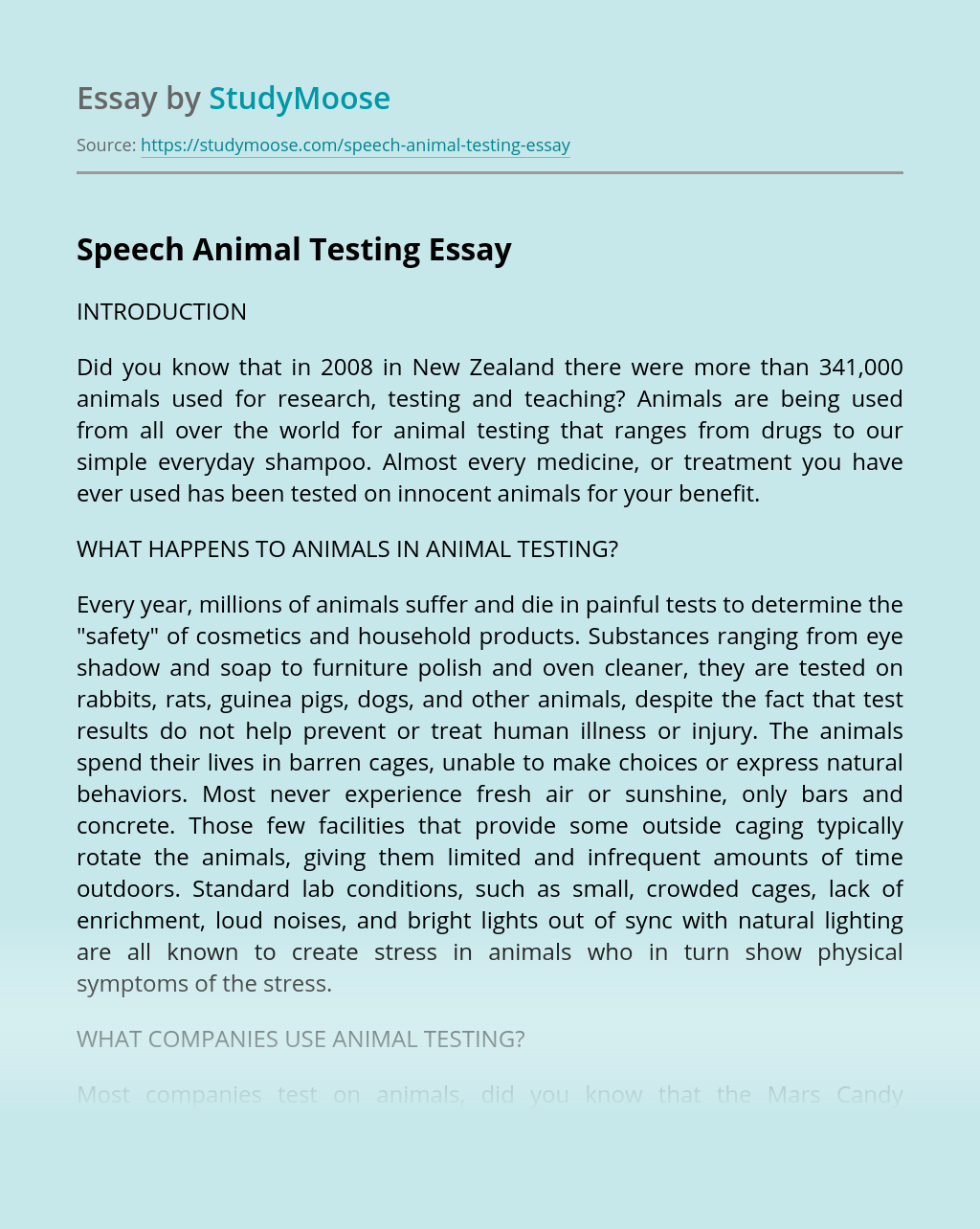 Turn in your highest-quality paper
Get a qualified writer to help you with
“ Speech Animal Testing ”
Get high-quality paper
Helping students since 2015
Stay Safe, Stay Original