The Psychological Impacts of Cosmetic Surgery

In 2017, about 18.4% of cosmetic surgeries worldwide were performed in the United States (Guest). Additionally, a report from the American Society of Plastic Surgeons states that there were 15.

Don't use plagiarized sources. Get your custom essay on
“ The Psychological Impacts of Cosmetic Surgery ”
Get custom paper
NEW! smart matching with writer

8 million cosmetic procedures in 2017, which has increased by 127% since 2000 (“Plastic Surgery Statistics Report”). Society’s fixation on physical beauty may play a significant role, especially due to “American culture” being “defined by the media through magazines, television, and music” (Haas). This drastic increase has given rise to concerns regarding the impacts of cosmetic surgery as its effects on patients’ cognitive behavior can vary. Some believe that cosmetic surgery helps to alleviate patients’ perception of themselves.

However, others contend that these physical transformations may not translate to an improvement in their psychological well-being.

This paper intends to explore the extent to which cosmetic surgery among women in the United States should be regulated, specifically focusing on the impacts on the psychosocial well-being and psychiatric state of the patients.

Patients’ psychosocial well-being considers both psychological factors and social environments such as quality of life, body image, and self-esteem. Cosmetic surgery is known to help augment one’s psychosocial welfare by improving their self-perception.

In their 2016 study, David Sarwer, Associate Dean of Research, and Heather Polonsky, both from the Center for Obesity Research and Education at Temple University, performed a study on patients who have undergone liposuction and abdominoplasty (Sarwer and Polonsky). Of the 360 subjects, “85.8% reported improved self-esteem and 69.6% reported improved quality of life postoperatively” (Sarwer and Polonsky). In essence, these surgical procedures alleviated their perception of themselves and their lives, thus improving their self-worth.

While the psychosocial aspects generally improve after the procedure, Maureen McHugh and Joan Chrisler, Professors of Psychology at Indiana University of Pennsylvania and Connecticut College, respectively, contend that data on the effects of surgery on body image is predominantly inconclusive (McHugh and Chrisler). Additionally, they found that fifty-one percent of patients are “repeat customers” which may suggest that “the initial procedure failed to increase the patient’s general body image sufficiently” (McHugh and Chrisler). Often, patients who are dissatisfied with one body part feel the need for repeated surgery (McHugh and Chrisler). Essentially, this continuous compulsion for surgery does not corroborate that body satisfaction increases postoperatively (McHugh and Chrisler).

In tandem, Diana Zuckerman, President of the National Center for Health Research, contends that while the body image of the experimental group members in a study alleviated after surgery, it also improved in the control group, who did not undergo any procedure (Zuckerman). This suggests that body image may improve as age increases irrespective of whether they received surgery (Zuckerman). In other words, age may be a confounding variable in the association between surgery and body image as it tends to naturally improve with age. Therefore, surgery did not significantly benefit the patients’ body image and could be attributed to increasing maturity.

While body image and other psychosocial factors can improve after plastic surgery, it is imperative to prevent compulsive behavior among the patients. With cosmetic surgery becoming more common, some researchers like Sarwer propose that patients should be assessed after the procedure to ensure positive body image (Dittmann).

In order to encourage a more positive perception of themselves, cosmetic surgery aims to diminish mental illnesses and improve the psychiatric state of patients. Marlene Rankin, Clinical Associate Professor at Rutgers University, performed a study regarding the short and long-term effects on patients. Using the Center for Epidemiologic Studies Depression Scale (CESD), they found that one month after surgery, mean depression scores improved by 4.7 points, and by 4.9 points after 6 months (Rankin). Therefore, the procedures decreased patients’ depressive symptoms, thus improving their mental health.

Similarly, Rod Rohrich, Chairman of the Department of Plastic Surgery at the University of Texas at Dallas, states that there is no direct relationship between cosmetic surgery, specifically breast augmentation, and harmful psychiatric effects such as suicide (Rohrich). Additionally, Rohrich suggests whether there are “underlying risk factors…that puts them at increased risk for suicide” (Rohrich). Thus, while there may be an association, it may be attributed to other lurking variables. In essence, he came to a similar conclusion as Rankin, contending that cosmetic surgery may not have negative impacts on one’s mental state.

In spite of not having a direct cause-and-effect relationship on one’s psychological state, cosmetic surgery can have deleterious consequences. Randy Sansone, Professor of Psychiatry and Internal Medicine at Wright State University and Lori Sansone, a family medicine physician at Wright-Patterson Air Force Base, state that several studies concluded that women with breast implants have a greater risk of suicide (Sansone and Sansone). Citing a study with 13,000 women who have undergone breast augmentation surgery, they found that the “standardized mortality rate…for suicide in this study sample was 1.54” 14 years after surgery (Sansone and Sansone). While the explanation for this significant association warrants further research, they argue that breast implants may contribute to a decline in psychological state, thus increasing the risk of suicide. Furthermore, they propose that psychiatrists and physicians should be aware of the patients’ psychological state as it could enable appropriate post-surgery diagnosis and treatment for the patients (Sansone and Sansone).

Vikram Reddy, Chief Clinical Integration and Quality Officer, and M. Justin Coffey, both from Henry Ford Macomb Hospital, came to similar conclusions as Sansone and Sansone in that several epidemiologic studies have concluded that there is an association between breast implants and suicide (Reddy and Coffey). Moreover, women who have undergone breast augmentation surgery “may have relatively more risk factors for suicide, including a history of psychiatric hospitalization” (Reddy and Coffey). Thus, these factors can deteriorate one’s psychiatric state which may be conducive to a greater risk of suicide.

Despite depressive symptoms diminishing in some patients and a lack of a direct causal relationship between breast implants and suicide, patients may experience greater psychiatric degeneration. Therefore, it is essential for surgeons to extensively assess their patients to prevent the deterioration of their psychological state postoperatively.

When considering the impacts of cosmetic surgery on women in the United States, it is critical to consider its effects on their emotional and social well-being as well as their psychological state. Cosmetic surgery can alleviate one’s self-worth and decrease depression. However, often, patients are fixated on repeated procedures, and their psychiatric state may deteriorate. As cosmetic surgery may engender declines in mental health in some patients, regulations should be reinforced to reduce this decline in their cognitive state and behavior. While cosmetic surgery should not be prohibited, regulations such as postoperative assessments of patients’ mental health should be implemented. If the patients’ cognitive behavior degenerates, these assessments can detect their diagnosis, and eventually, they can receive treatment. Essentially, proposals to further encourage psychologists and cosmetic surgeons to help improve their patients’ mental health after the procedure may help diminish psychological decline and augment self-acceptance among patients. Therefore, if implemented, the ramifications of cosmetic surgery can decrease, and the apprehension towards surgery can further diminish.

McHugh, Maureen C, and Joan Chrisler. The Wrong Prescription for Women: How Medicine and
Media Create a “Need” for Treatments, Drugs, and Surgery by Maureen McHugh. Praeger,
14 July 2015.

The Psychological Impacts of Cosmetic Surgery. (2020, Sep 23). Retrieved from http://studymoose.com/the-psychological-impacts-of-cosmetic-surgery-essay 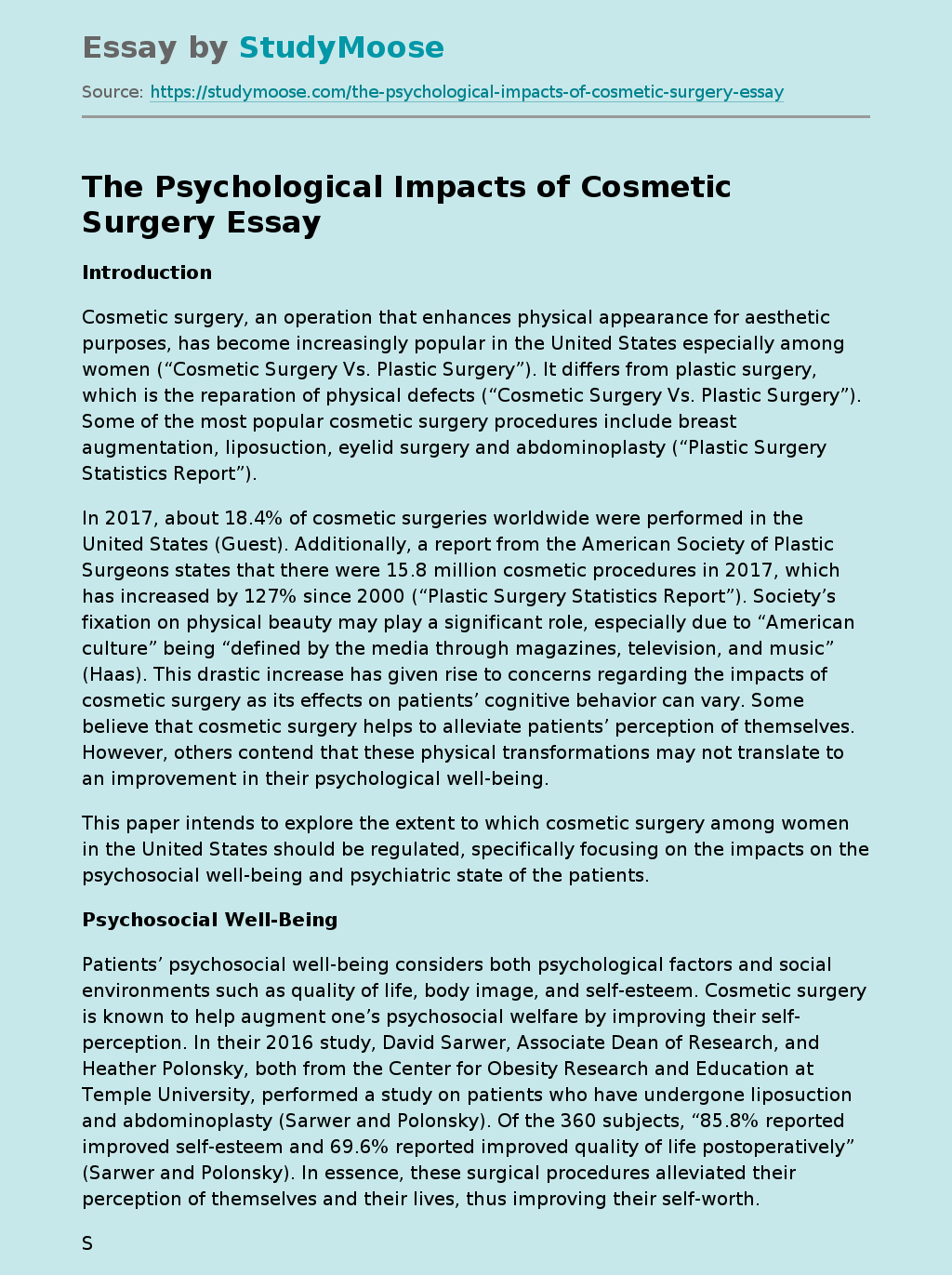