Aesop is an Australian based super premium cosmetic business that has considerable existence in Asia-Pacific, Australia and North America with the ability of creating A$ 49 million income in 2012. Aesop has an active track record in expanding into new markets and is preparing to present its products into Italy. Being the seventh biggest economy worldwide, Italy is widely popular for its substantial and advanced consumer market that supplies considerable potential opportunities for Aesop to be successful. Additionally, Italy has a recognized cosmetic market that is approximately 9 billion Euros in size and has prospective for development in a couple of item sectors.

Turn in your highest-quality paper
Get a qualified writer to help you with
“ Marketing and Aesop ”
Get high-quality paper
NEW! AI matching with writers

The report aims to incorporate marketing theory with in-depth research that comprises a tactical marketing strategy to supply appropriate and sufficient info about doing business in Italy.

After choosing the methods that Aesop are well-positioned to release, its market entry mode and marketing mix methods for Italy are more established and elaborated with the assistance of previous recognized strategies and findings.

The proper marketing theories or frameworks used throughout this marketing plan will be described and their objective, strengths and weaknesses, if applicable, will also be gone over in their respective sections prior implementation.

The foundation of a good marketing plan should have a focus on the four elements of the overall environment that might influence the success of the outcome, which is widely referred as the 4Cs and also widely known as the situation analysis (Walker 2009). The 4Cs represent company, context, competitors, customers and collaborators. An analysis on the company is first conducted and the findings will form the strengths and weaknesses of the SWOT analysis performed in the next stage.

Aesop David Paphitis established Aesop in 1987 in Melbourne, Australia. Aesop operates in the manufacturing, retailing and marketing of premium beauty and skin care segment (Euromonitor 2013). Earlier this year, Aesop was acquired by Natura, a publicly listed Brazil cosmetic company, and retained only 35% of its stakes.

Corporate mission Aesop’s mission is to provide customers with superlative skin, hair and body products with integrity, simplicity, authenticity, attention to detail and the best ingredients (Cosmetics International 2011, About Aesop 2013).

Corporate vision Aesop philosophy is to focus on a holistic perspective on beauty that combines skincare with an emphasis on exercise and diet (Euromonitor 2013, Manan 2004).

Regional structure and operations Aesop operates more than 50 signature stores globally while owning 355 wholesales stores in more than 10 countries. It is found that Aesop’s signature and department stores provides most of the revenue for Aesop. Separately, they contributed 48% and 40% of the total revenue respectively (Motta 2013). Aesop’s global head office is in Melbourne, Australia. Aesop also positioned regional hubs in Americas, Europe and APAC-excluding Australia (Motta 2013).

3.1.6. Brand Image in the Market Aesop creates its luxury and exclusive experience for consumers based on word-of-mouth and its one-of-a-kind design only. This is contrary to most brands that rely on media and agencies for advertising and promotion (Turner 2011). Aesop uses design as a channel to communicate its core values and its customers, who demand high quality products from Aesop (Turner 2011).

Research and Development (R&D) Aesop situates its own R&D team in laboratory in Melbourne in the heart of its corporate headquarters (Motta 2013). The team is responsible for all the quality assurance, innovation, research and prototyping of all its products. Aesop spends a significantly higher proportion of its costs on R&D than its competitors (Burns 2002).

Profit Margin Aesop’s forecasted profit margin for 2013 would dip due to higher than historical depreciation and operation costs (see Appendix 2). Nevertheless, the operation costs will see of a smaller percentage of the net sales attributable to the support of strong sales. Aesop is on course to post a higher margin in the future.

The founder and creative director of Aesop is David Paphitis. He possesses significant experience in the beauty, skincare and hair products industry. His philosophy of nature and health is deeply entwined within Aesop’s operations. His refusal to sell Aesop to private funds is an act of never compromising quality for profit (Safe 2008). It is to avoid compromising his ideology and beliefs over Aesop’s operations and products.

Business environment can greatly affect the business directly and indirectly. PESTEL framework is used to identify the influences of political, economical, social, technological, environmental, and legal on the organizations. Analyzing these factors in term of current and possible future situations can imply the proper ways for the organizations in order to invest or survive in the particular business environment (Johnson, Scholes and Whittington 2008). The PESTEL factors along with its associated trends and explanations are provided below:

• Most of luxurious outlets are located around Italy’s key fashion destinations of Florence, Milan and Rome (Euromonitor 2011) • The retail value of internet retailing in 2011 was €3.1 billion, an increase of 142% compared to 2006

Porter’s five forces analysis provides insight on the degree of competitive in firm specific industry. There are five factors that affect the level of competitiveness and they show how the industry affects its players (Baines et al. 2008). Companies can use Porter five forces analysis to examine their competitors. Therefore, they will understand the opportunities and threats existing in the industry when they enter new countries and devise strategies to exploit the opportunities and minimize the threats (Peng 2014). 1.Intensity of rivalry: High This examines the number of cosmetics brands in Italy. If there are many firms in this country, the probability that Aesop can make a profit will diminish. According to Euromonitor (2012), there are a few leading cosmetics companies in Italy such as L’Oreal, Procter & Gamble, Beiersdorf AG and Shiseido. This shows that the degree of intensity of cosmetics industry in Italy is high.

Potential competitors will enter market which is attracted them but they can be obstructed by entry barriers such as brand loyalty, economies of scales and increasing in distribution. According to Reportlink (2013), an increasing in sale of global skincare market will reach to 21 percent from 2010 to 2015. In addition, the economy will recover. This will attract other competitors joining in this market because customers do not concern about a brand or brand loyalty. They will penetrate a brand that sell product in low price and good quality. In Italy, many brands from other countries try to dominate cosmetics industry especially in skin care such as L’Oréal, Beiersdorf, Clarins, Estée Lauder, Shiseido and Johnson & Johnson (Euromonitor 2012). This shows that the risk of new entry is high because competitors have to spend a lot of money in research and development to produce new product or try to differentiate their product.

3.Bargaining power of buyers: High Italian customers have high bargaining power because they have many brands of cosmetics in Italy that offer them a good quality and price that they can afford. Moreover, Italian people spend their money carefully when they purchase these stuffs because of recess economy. Buyers who are retailers can have backward integration by providing their own brand.

4. Bargaining power of suppliers: Low Bargaining power of suppliers in cosmetics industry is low because there are a high number of market players and large suppliers. Moreover, Italian consumers prefer cosmetics that made from nature and there are many suppliers around the world who can offer the low price material such as Asian countries to cosmetics manufacturers. 5. Threat of substitutes: High There is a high threat of substitute product in cosmetics industry because there are many brands that offer same product line such as eye cream and anti aging product. Moreover, people can change their preference and counsel with dermatologist to take care of their skin health.

3.3.1. Key Competitors According to Marketline (2012), the three leading cosmetics companies in Italy are Beiersdorf AG, L’Oreal and Shiseido. However, these three cosmetics brands have different market group from Aesop. Thus, their product offerings will not be in same range even within the same product line (see Appendix 3). L’Oreal L’Oreal wants to increase their market share to another country. They need to doubling their sales and their market strategy is penetration and they call themselves is “multi channel”. L’Oreal shows and sell their product to massmarket channel such as Wal-Mart’s and Targets. Moreover, they sell cosmetics in luxury department store such as Macy’s and Nordstrom (see Appendix 4).

Therefore, L’Oreal’s price will not be as high as Aesop and Shiseido because L’Oreal ‘s strategy is to cover all customers. Shiseido Shiseido categorize their customer in five age groups, so their stores are ranked according to age group. The shops that sell to high-class customers will offer better promotion to their customers such as greater rebate, good beauty consultant and many samples. Their products are luxury and anti aging which are developed through innovative scientific discoveries (Girvin 2013). According to Shiseido annual report (2012), when Shiseido operate their business in other countries, they will sell high price premium with good service from personal sellers.

They use “Masstige” word to describe their brand image. This word comes from Mass and prestige, meaning that Shiseido’s products are more expensive than mass product but price is not high like prestige products. Beiersdorf Beiersdorf is a brand that focuses on skincare: NIVEA, Eucerin and La Prairie. Beiersdorf try to continually create and produce new product to market and develop new product categories such as Nivea for men. In addition, they expand to new market to get new market share, and they offer the price that all customers can afford.

In order to identify and gather relevant information on the potential customers in Italy, a customer analysis is performed to break down the customer base into groups and segments. According to Kotler (2012), the customer analysis focuses on identifying the group of customers who share similar needs and wants. It shows the nature of segmentation by socio-demographic, behavioral, psychographic and benefit sought. This variables and findings are shown below: Segmentation variables Age Details Socio-demographic Between tweens and adult is the majority aged group of Italian (Chan, Tufte, Cappello & Russell 2011). The over-50 age group possesses high buying power (Walker 2013).

Insignificant The majority group is middle and upper class that have high power of purchasing (Kerschner & Huq 2011). Family and acquaintances Italian customers not only buy product of themselves but also for others (Schiffman, Kanuk & Wisenblit 2010). Behavioral Readiness Occasions Loyalty Usage rate Innovativeness Aware and knowledgeable about skin care product (CIA 2013) For everyday used and special occasions. High loyalty if product can perform as claimed (Cecchi et al. 2011). Routine use Italian customers prefer to pay extra in the high quality and performance stuffs (Cecchi et al. 2011). Psychographic Personality Italians order Life Style have to strongly attitude about building and maintaining self-images in have good appearance (Sanderson 2010). Metro-sexual and self-loving. 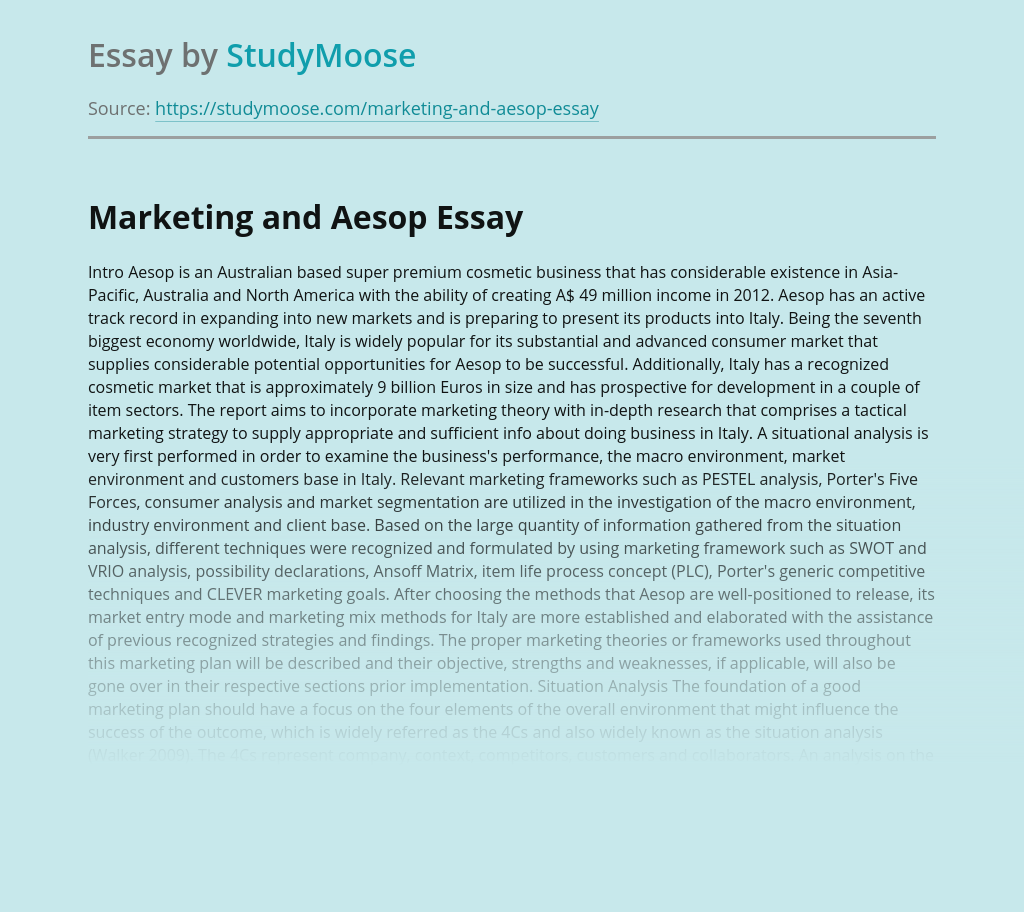 Turn in your highest-quality paper
Get a qualified writer to help you with
“ Marketing and Aesop ”
Get high-quality paper
Helping students since 2015
Stay Safe, Stay Original