The Ant and the Grasshopper

Aesop’s fable “The Ant and the Grasshopper” is a famous moral lesson about how hard work and austerity pays out at the End. While the grasshopper sings and enjoys himself in the summer, the ant is hard working and preparing for the winter. At the end, the grasshopper cannot find food to survive the hard winter. Whereas, the ant is well prepared and has no worries about the upcoming winter. The grasshopper begs the ant for food but the ant refuses to help him.

Don't use plagiarized sources.
Get Your Custom Essay on The Ant and the Grasshopper Just from $13,9/Page

In his modern adaptation, W. Somerset Maugham provides us with a setting of two brothers.

While the older brother, George, is hard working and saving money for his retirement. The younger brother, Tom, is enjoying himself and his life. Tom has no permanent job or relationship. Even though, he tried to be like his brother George, he soon recognizes that he is not like his brother and that he will no longer compare himself with his older brother.

On the other hand, George always compares himself with his younger brother and sees himself as a superior. As soon as Tom regains his luck and becomes rich in the end, George cannot bear this and is envious of his Brother.

For me the story of Mr. Somerset Maugham is different from Aesop’s fable. It is a story about comparing yourself to someone else and to despair of it. In the following essay, I will try how the writer is characterizing his protagonists and how my perception of them changed during the story. Firstly, the author draws a kind of negative picture of Tom and a positive of George. He describes George as a respectable, hard-working and loving family father, who has to care for “his unfortunate brother” (Line 21). Moreover, Mr. Somerset Maugham shows some compassion for George. I was sorry for him. ” (Line 20). On the other side, he describes Tom as, the black sheep of the family (Line 30), first trying to be like his brother and then leaving his wife and children to enjoy himself. What is more, Tom, has just little money and exploits his friends. (Line 45). All in all, you get the impression that George has always been the good guy on the right way. Whereas, Tom is considered to be a bad guy on the wrong track by means of morality and the prevailing understanding of a successful way of life. Secondly, the way of how Tom is described changes through the story.

While the description is very negative in the beginning and tries to influence the reader’s opinion about Tom in a negative way. It becomes a more and more jealous or understanding point of view: “For twenty years Tom raced and gambled, philandered with the prettiest girls, danced, ate in the most expensive restaurants, and dressed beautifully. ” (Line 63-63) Tom is, so to say, described in a more objective way. The author seems to be more sympathetic to Tom and therefore, the reader’s opinion about Tom changes as well. This is also where the story changes and when you recognize that there is not only one way of life.

Lastly, the author illustrates more and more that George is comparing himself with his brother. “For twenty-five years I’ve said that Tom would end in the gutter. And we shall see how he likes that. We shall see if it really pays to work or be idle”. (Line 88-90) The way of how George is perceived changes at the end of the story. He becomes increasingly embittered and unfair about his brother. Moreover, he describes himself as: “[]… hardworking, decent, respectable, and straightforward. ” (Line 98-99).

Whereas, he argues that Tom is: “[]…idle, worthless, dissolute, and dishonourable rough. (Line 104-105) At the end, instead of being happy for his brother, George is envious of Tom. He is not able to take his brother’s luck for himself. Because, he has always compared himself with Tom and felt superior to his brother. To sum up, the writer is very good in changing the opinion of his reader. At the beginning he writes about the original fable and the reader thinks that he will experience the same story but in another setting. Instead, the story of Mr. Somerset Maugham develops in a different way and begins where Aesop’s fable ends.

The older brother George compares himself with his own brother during his whole life. Moreover, he is jealous about Tom and hopes that his brother is going to be punished for his dissolute lifestyle. Instead of living his own life and looking forward to his forthcoming retirement with the money he saved. George concentrates on the life of his brother and cannot enjoy his own life. My interpretation of Mr. Somerset Maugham’s work would be: If you compare yourself with others you can never be happy because, there is always someone who is better or luckier than you.

The Ant and the Grasshopper. (2016, Oct 06). Retrieved from https://studymoose.com/the-ant-and-the-grasshopper-essay 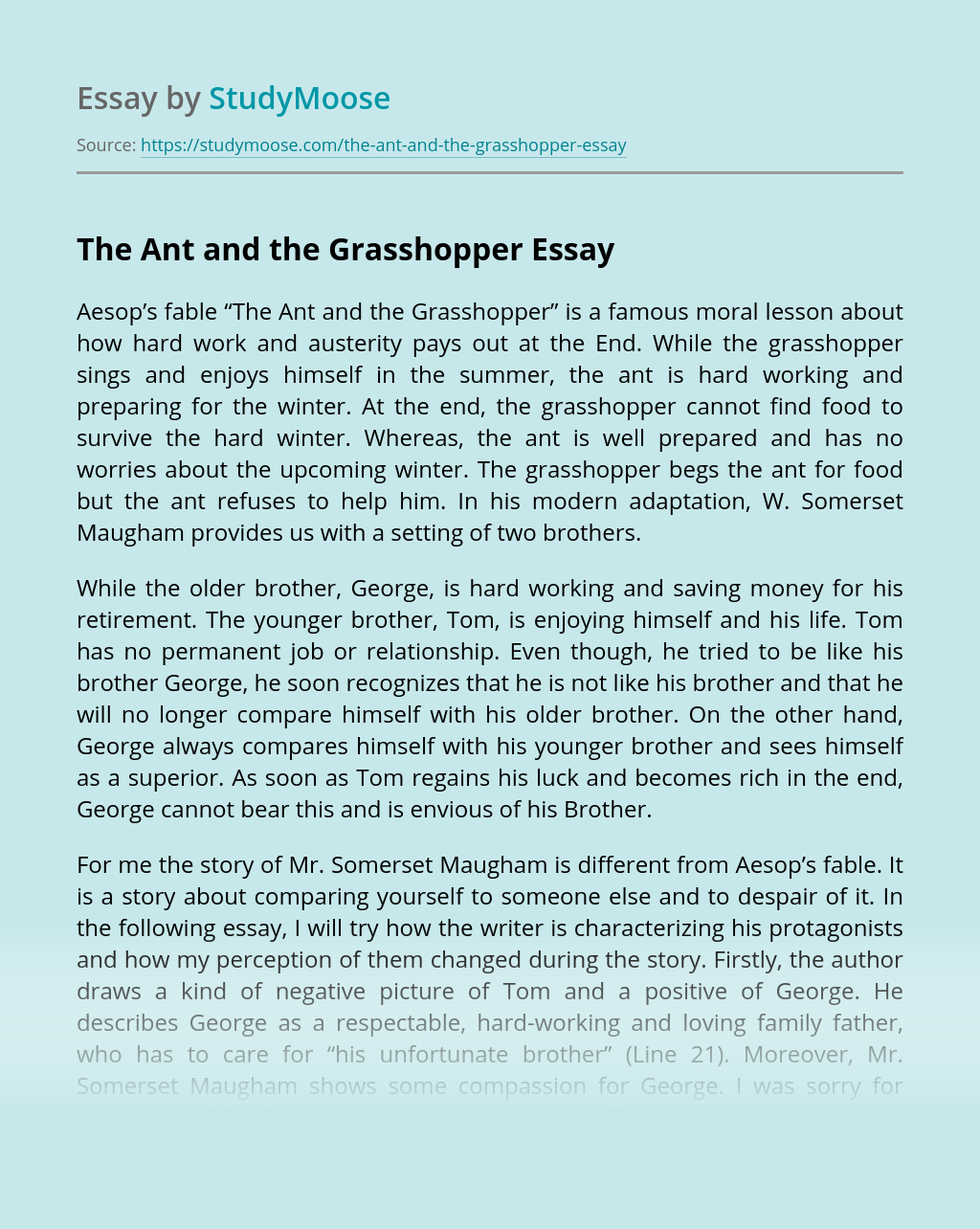 Final Project Part1: Directorial Vision Statement The piece that I selected for this formal treatment is Romeo and Juliet by William Shakespeare. I select this for a couple of reasons that are listed as the following. First of all, Romeo and Juliet is so famous and popular all around the world, and the two main...

Get Essay
The Chocolate War: To Ban or To Not Be Banned

In Robert Cormier’s The Chocolate War, the story itself may be considered a little controversial. Although the storyline is interesting and many people had their eyes glued to the page, others believe that some parts in the book are too controversial that it should be banned in schools. I personally believe that even though The...

Throughout “Death of a Salesman,” it was very clear to me that the play was an excellent representation of the idea of “The American Dream,” amongst other broader themes. This notion, as I understand it, relates to the belief that there are countless opportunities for everyone to reach out and grasp, no matter who they...