“The Verger” by William Somerset Maugham

William Somerset Maugham (1874-1966) is a well-known English novelist, short-story writer, playwright and essayist. He is famous for his clear and precise style of writing. He does not impose his views on the reader. When criticizing something he sounds rather amused than otherwise. The short story “The Verger” is an example of how a person can be successful in life even though he is illiterate. Anyway, he makes a good use of his creativity. What is more important is how to use our knowledge correctly.

Don't use plagiarized sources. Get your custom essay on
“ “The Verger” by William Somerset Maugham ”
Get custom paper
NEW! smart matching with writer

The new vicar of St. Peter’s Church is astonished to learn that the long-serving verger, Albert Foreman, is illiterate. When Foreman refuses to learn to read, the vicar feels he has no choice but to fire him.

On the way back home, Foreman notices that there is not a tobacconist shop in the area. Needing work, he decides to open one. He also takes the opportunity to propose to his landlady, Emma. Their business is very successful, and Foreman soon sets up another shop, run by his stepdaughter and her husband.

Over the next decade, Foreman starts up more and more shops, becoming a wealthy man in the process and depositing his profits at the bank.

The bank manager recommends that he invest his savings in order to get a better return on his money, forcing Foreman to reveal that he has not been able to because he cannot read. When the stunned manager asks (rhetorically) if he knew where he would be if he could, Foreman replies that he would be the verger of St.

Peter’s. The author uses of the omniscient third person narration, because he has free access to felling, thoughts and motivation of each character, and do not interfere. The story is set in London. I can say that the type of the conflict is external, because the character struggles against the circumstances that he faces. By the end of this story we can find irony, when our character realized what would happened in his life if he accepted the proposal of the new vicar, he would not be the men who is now. The main character of this story is a man call Albert Edward Foreman; this person is illiterate but creative. He is married; he loves his job of a verger. Although he had been fired out of his job, he did not want to start learning how to read and write because he did not see the sense of it.

“The Verger” by William Somerset Maugham. (2016, Apr 24). Retrieved from http://studymoose.com/the-verger-by-william-somerset-maugham-essay 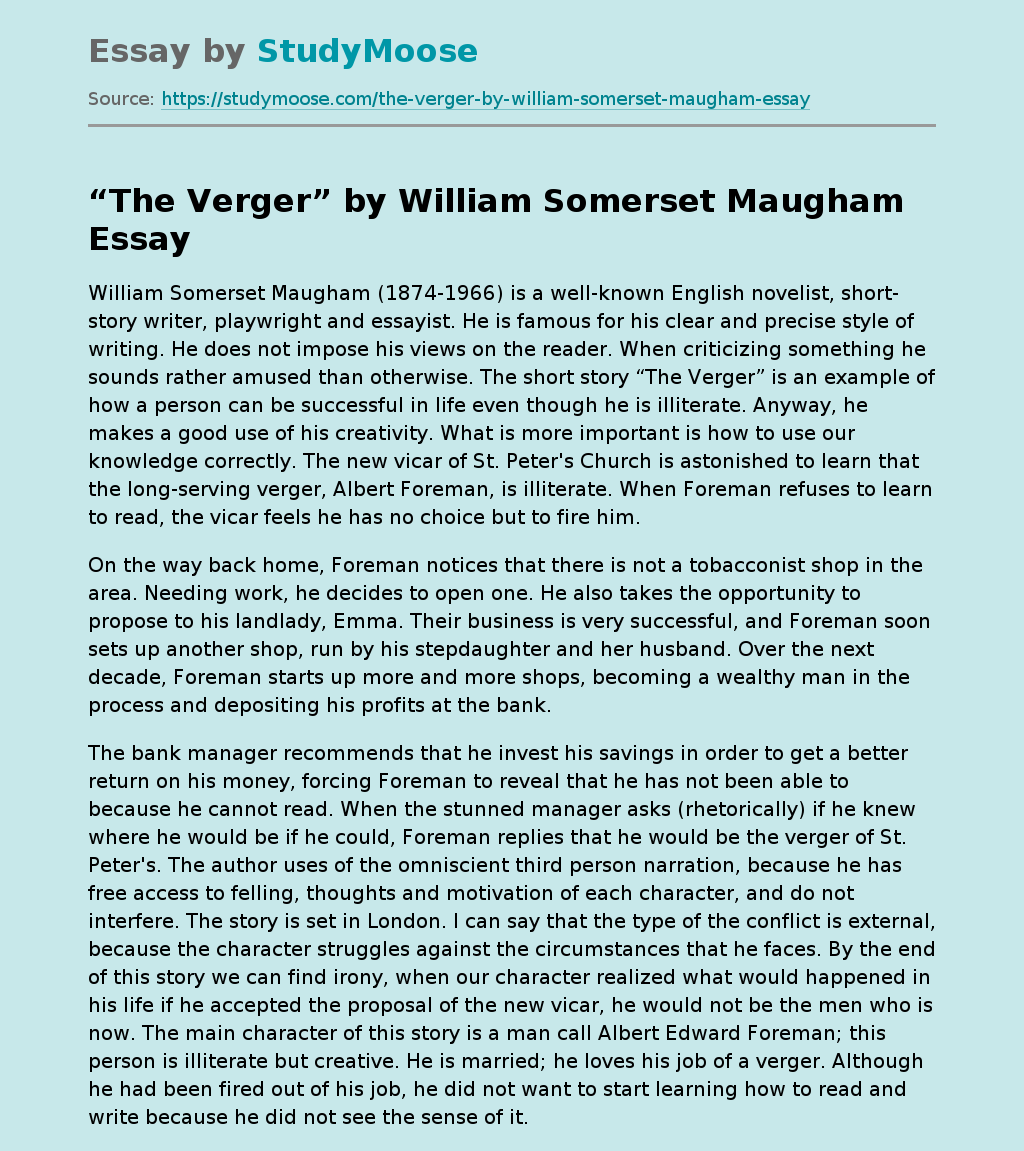