The Escape by W. Somerset Maugham

The Escape (1925) is a novel written by a famous British playwright, novelist and short story writer. This story is about a young man who is lucky to meet a woman of his dreams. For a long time, he is blinded by love and tenderness and determined to marry her. But one fine day, he falls out of love with her. To avoid the wedding and to stay the most gallant man until the end of their relationship at the same time, he tries to find a way to make a woman to leave him out on her own accord.

Don't use plagiarized sources. Get your custom essay on
“ The Escape by W. Somerset Maugham ”
Get custom paper
NEW! smart matching with writer

This is a social-psychological novel that reveals the problem of relations between men and women in bourgeois society, depicts the psychological portraits of characters, and describes their feelings, emotions and thoughts as well. The protagonist of the story is Roger Charing, a tall, handsome, rich, experienced middle-aged man. Of course, many women want to marry him, but he is happy to live the life of an unmarried man; the epithets sufficient experience and careful give the direct description of his lifestyle.

But then he meets Ruth Barlow, the antagonist of the story, and falls in love with her.

She is a quite good-looking woman with big splendid dark eyes full of sadness (she is twice a widow). And those big and lovely eyes were the very gift that renders most men defenceless. This “gift” helped Ruth to reach her goals. According to the narrator’s opinion, Ruth was two-faced woman of few ideas: he called her stupid and scheming.

The epithets stupid and scheming and the simile as hard as nails add some points to her direct characterization. In this way, we gradually move to the plot of the novel. In the exposition author introduces us with the problem of marriage: for women it is the aim of life, for men it is a kind of hazard, trap; he uses the metaphors instant flight could save him and the inevitable loom menacingly before him talking about marriage as a dangerous thing. We can feel that sarcastic humor that is so typical for all Maugham’s stories. It lies in the fact that the poor friend came to what he had run away.

Then there comes the rising action, in which two main characters, Roger Charing and Ruth Barlow, are introduced. Here we can also observe ironic humor which are mostly come forth in these passages – it is said that Ruth was twice a widow, which makes the reader guess that Roger is the next victim, through the figurative simile (He went down like a row of ninepins) and epithet defenceless used towards the men. The author also uses a question periphrasis (or should I call it a quality?). He gives a direct description of Ruth’s eyes using the epithets splendid, moving, big and lovely and a detached epithet poor dear – all in the ironic way. In the description of Ruth’s sufferings the author uses the anaphora if she…, if she… to emphasize that she was really a poor thing, but it is done ironically as well. Especially ironically sounds the metaphoric allusion she never had a lamb. So, we can make a conclusion that Ruth is a woman of poor intellect, but she is capable of scheming and uses her position to arouse pity in people.

The author also uses repetition of the words pathos, pathetic in the description of this woman. Roger, from these passages, seems to a reader a strong, hefty fellow who is noble enough to sympathize with a poor little woman in trouble and to stand between the hazards of life and this helpless little thing (a visual-imaged metaphor), but in the same time he looks a bit foolish on the background of the narrator’s irony. Going further, we come across the climax. The tense is growing, but then Roger on a sudden, fell out of love. This is a bit unexpected. Ruth’s pathetic look (a repeated epithet) ceased to wring Roger’s heart-strings (a metaphor). But Roger swore a solemn oath (a metaphor) not to jilt Ruth; moreover, she was able to assess her wounded feelings at an immoderately high figure (an extended metaphor).

And here begins the real climax with its growing tense. The author uses the following repetitions: anaphoras they…, they… and sometimes…, sometimes…; syntactic parallelism they looked, they inspected, they climbed. The proceeded searching for a house looks like a repetition as well. Having taken an interest, does Roger want to marry her or does he not, Ruth loses her temper (the epithet an unaccustomed hardness in her voice). Roger kept standing on his position (epithets assiduous and gallant). Their letters are the denouement, happy for Roger. Roger appeared to be very smart and sly person. He appeared quite cute to predict Ruth’s following actions. When he got the hang of Ruth, he pretended he was still in love very gallantly, until she got the hang of him.

This is the end of their relationships. At that moment there was no love, there was no even the sympathy between them. They became the enemies. It was Roger’s victory. He achieved measurable gains at this story. In this portion of the text the tone changes: it is still ironical, but there appears some serious element. To draw the conclusion, I must admit that firstly I took Roger’s side because I consider that each person should have a right for free choice, and furthermore the way he made her leave him out is a more civilized way of jilting a woman.

But then I was sorry for Ruth. Roger tired her out and she didn’t understand what was happening. The epithet exhausted demonstrates her state brightly. It is obvious Ruth was narrow-minded woman and she didn’t really love Roger. But there are some arguments to be said in her defence, she lonely and wanted to be protected. And the harsh reality of bourgeois society was that a woman had to be married, even if it was a marriage of convenience, otherwise she was considered as a lost soul. Thereby, it is not clear enough who managed to escape and from whom.

The Escape by W. Somerset Maugham. (2016, Aug 24). Retrieved from https://studymoose.com/the-escape-by-w-somerset-maugham-essay 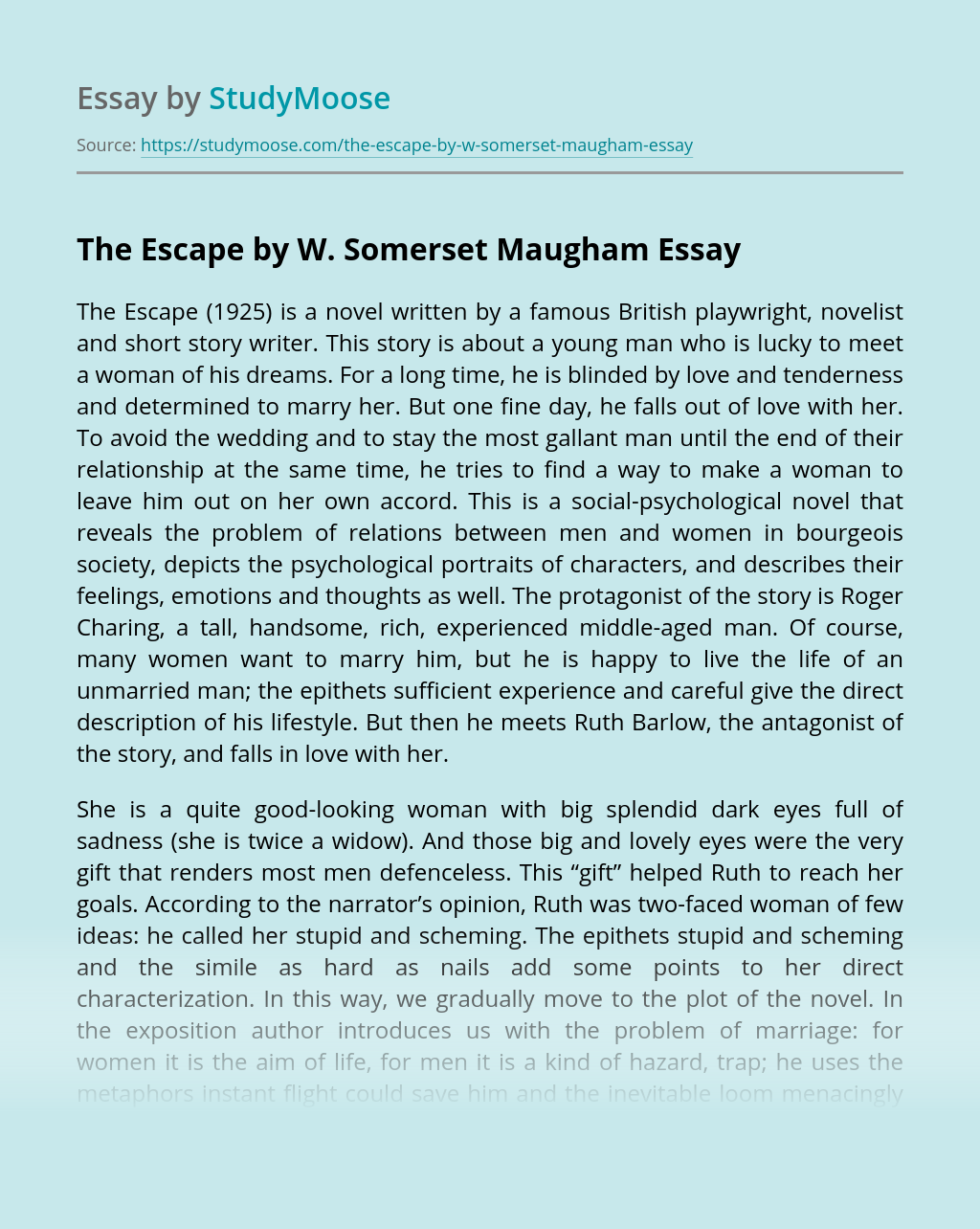