Roger and Ruth Relationship in "The Escape" William Somerset Maugham

The romantic relationship between man and women has been the favored subject of literary works from time to time. In some negative cases, when man’s feeling vanishes, they either actively leave the women or silently torment their partner so as not to be a betrayer. Roger in ‘The Escape’ of William Somerset Maugham is exactly the second situation. This short story revolves around the love story of two main characters — Roger Charing and Ruth Barlow. In this essay, by focusing on the theme, I would argue that the author has provoked readers’ thoughts about the values of love and life by revealing the irony embedded in Roger and Ruth relationship.

Don't use plagiarized sources. Get your custom essay on
“ Roger and Ruth Relationship in “The Escape” William Somerset Maugham ”
Get custom paper
NEW! smart matching with writer

In ‘The Escape’, Maugham presents the idea that love impossibly remains constant between two disparate people with diverse approaches. Roger is an attractive man to any girls with some qualities such as wealthy, matured and experienced. He expeditiously fells in love with a woman who ‘had splendid dark eyes and they were the most moving I have ever saw’.

He has expressed his love in certain ways such as ‘Roger introduced her to his friends. he gave her lovely jewels. He took her here, there, and everywhere’. The act of introducing a girlfriend to others, especially familiar faces, is supposed that a true lover probably does. Not long after, Roger proposes Ruth and gets her accept. That proposal implies Roger takes this relationship seriously since marriage is considered important in one’s lifetime. He also feels ‘dreadfully sorry’ for her past and assures that Ruth is a good-natured and miserable woman when confiding with the narrator.

On the contrary to Roger, Ruth is described as ‘stupid’ and ‘scheming’ and that nature is gradually exposed in her own relationship. The only thing to make Ruth closer to Roger is his money.

‘She is twice a widow’ Throughout the story, Ruth hides under the role of a victim and deceive Roger’s compassion. At the end of the story, due to the sense of not being able to impose on Roger anymore, she abandons him to marry another man without hesitation. To the extent that Roger goes for love while Ruth’s priority is money, it is predictable that they will have a fragile relationship.

The central theme of this story is that escape is inevitable when man’s emotion disappears from a relationship. From the very first beginning of the story, the irony is exploited in some metaphors such as ‘nothing but instant flight could save him’, ‘seeing the inevitable loom menacingly’ when the author cautions marriage is hazardous. Moreover, it also implies that Roger — the author’s old friend is going to come back to what he has run away. When emotion swiftly changes, Roger returns to be a discreet and wise man as he is before.

Instead of acting recklessly, he comes to a procrastination by making a deal that they probably have a wedding until the most suitable house is found. Unfortunately, the more house they see, the more confused they get as each one has an excuse for not choosing. This arrangement is such a smart decision that he is not only able to preserve his fame and dignity but also resolve the dilemma. As Roger’s expectation, the one who ends this relationship is Ruth. In this case, procrastination is certainly a concept of passive fleeing.

Another theme of ‘The Escape’ is that man and woman apparently retain their dignity in spite of the broken relationship. Sending some words of official farewell is supposed Ruth’s respectful behavior toward Roger. On the side of Roger, his stable graciousness is performed not only from the beginning of the story but also after receiving Ruth’s letter. His polite response shows that he still gives her special affection so ‘I shall never get over the blow’ and attaches a list of houses. That list make the reader assume that Roger puts a gentle irony in that reply.

Roger and Ruth Relationship in "The Escape" William Somerset Maugham. (2020, May 13). Retrieved from https://studymoose.com/roger-and-ruth-relationship-in-the-escape-william-somerset-maugham-essay 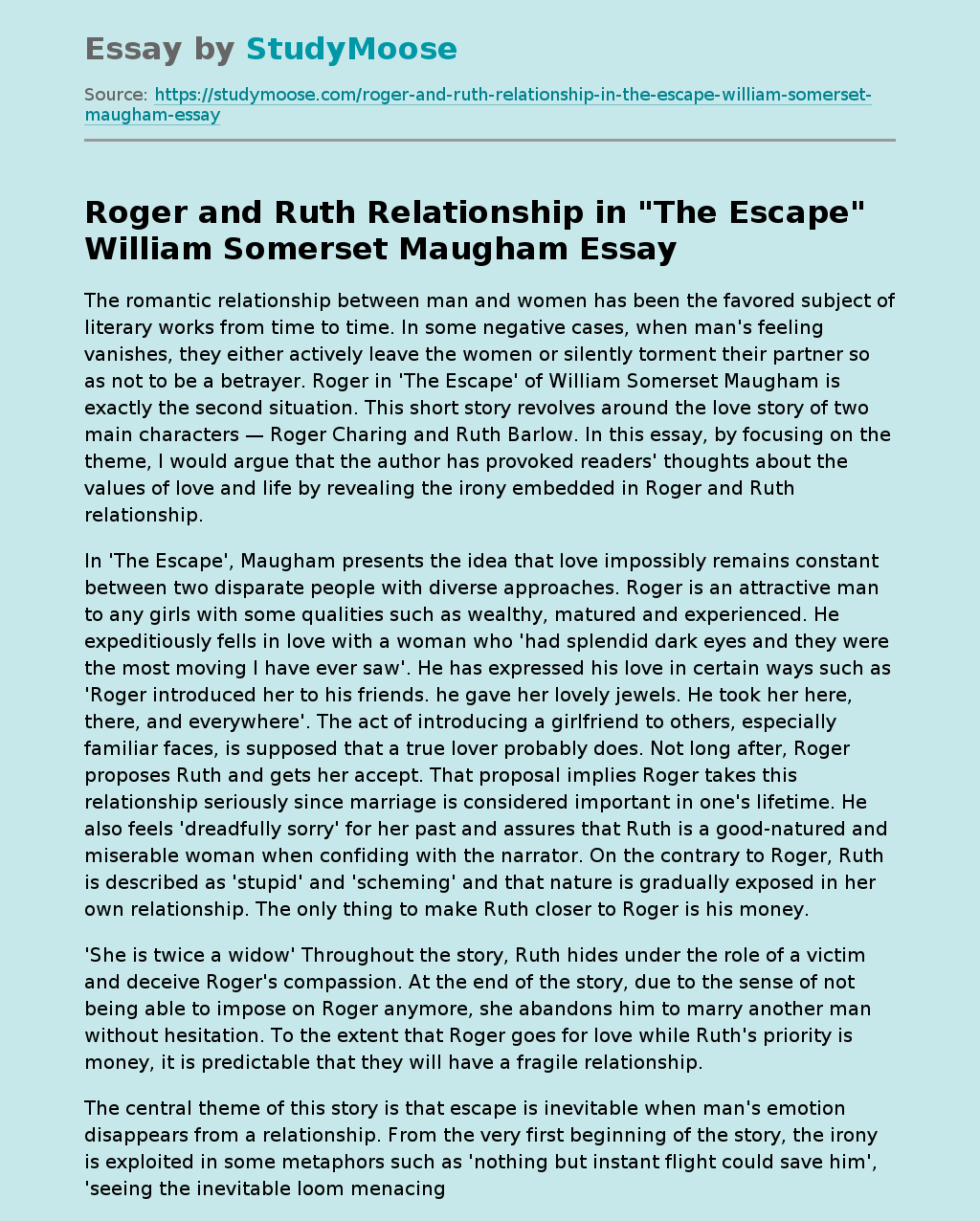