Rain, by Somerset Maugham seems to have a rather irrelevant title when first looked at. The first part of the story that introduces us to the story have no relevance to rain, or any other weather feature for that matter. However, as the story progresses, rain, and metaphors about the weather play a very important part in the story, and it sets the mood of the story.

We do not get an image of the weather until page 8 (page numbers from collected short stories vol.

Don't use plagiarized sources. Get your custom essay on
“ Rain by Somerset Maugham – Comment on the significance of the recurrent image of rain in this short story ”
Get custom paper
NEW! smart matching with writer

1). However when the rain is introduced it happens very quickly and it moves the story on.

‘But Mrs Davidson had given two or three of her birdlike glances at heavy grey clouds that came floating over the mouth of the harbour. A few drops began to fall.

They made their way with all the crowd to a great shed of corrugated iron, and the rain began to fall in torrents.

This quote shows how immediate the rain came. It seems to the reader that as soon as they have shelter, the rain falls intensely. It is also interesting here, because it seems that they have only been on the island for a few minutes, but yet then, the rain starts. The reader gets an impression of nature versus the English-men. We get the impression that nature is fighting the white men and doesn’t want them there to destroy what is there. This is shown by fast moving text, but also by the vocabulary used in this passage by the word ‘torrents’.

The official meaning for this word is ‘fast moving water’, but the images that we would think of when we hear this word are fast, torrential rain.

I think that the image of rain is also used for moods within the story. The way that a minute later Mr. Davidson comes to tell the other members of the party that they are stuck on the island, is placed well; because the image of the rain is depressive and the news is bad, therefore the misfortune has that much more effect upon the reader.

As this passage progresses the rain does not stop. Mr Davidson is talking to the other characters about where they can stay on the island.

The language used here gives the reader an indication that the rain paralyses the white-men. This is another hint to the reader that the island doesn’t want the white people there. It also shows that the white-men don’t cope with the climate, even though the weather they are experiencing, they should be familiar with due to the conditions usually found in England.

This is shown by this image.

‘But the rain showed no signs of stopping, and at length with umbrellas and waterproofs they set out.’

The image of umbrellas and waterproofs is very British and it is quite stereotypical. It shows though, most importantly, that the rain is affecting the way that the characters act, and what they can do. Also the rain being described at the beginning of this quote also shows its power because it is continuing to fall in torrents.

Somerset Maugham uses a very inspired device of linking the rain and bad, depressing parts of the story. This has been shown to us before, where the bad news of the characters being stuck on the island has the mood reflected in the weather. Here we are shown this device again but it is more obvious.

‘They looked around with dismay. The rain poured down without ceasing.’

The next image that we get of the rain is a description of its cruelty.

‘He stepped out into the rain. It swept in from the opening of the harbour in sheets and the opposite harbour was blurred’.

This shows how heavy the rain is. The image of sheets is powerful as a sheet is a quite solid object, the way that a sheet would fall on a person would completely cover them, I feel that this choice of vocabulary is effective in this sense because it makes the reader imagine Dr. Mcphail being completely covered in rain. Also this quote leads onto the description of the native people which ‘walked finely, with leisurely movements’ he goes on to say that ‘they smiled and greeted him with a strange tongue’.

This shows how well the native people cope with the conditions, by the way they walk, and how the rain doesn’t affect their mood, by the way they smile and are kind-hearted towards the doctor. This makes the reader start to really believe how badly the characters are coping with the weather conditions. It also reinforces the idea that the island wants the white people off it. It is symbolic and it is all the way through the story hinting that they do not belong there.

The next page brings us the fact that even when the rain is not pouring, the weather is still depressive. It also makes the idea of man versus island very much more believable. ‘the sky was still grey and the clouds hung low.’

There is an absence of the image of rain for 12 pages after it stops. This could make the reader think that the white men have won the battle between the weather, but the focus of the story changes to Miss Thompson and there is not much need for the image.

However, when the description of the rain returns, we are told before it that the rain was beginning to ‘get on his nerves’. This in itself is interesting as it shows he is getting irritable due to the rain, this again shows how the weather is winning the battle between the white men and the island. It also shows though how it has not stopped for as long as we thought it had, which shows its persistence. The description of the rain is in great detail.

‘It was not like our soft English rain that drops gently on the earth; it was unmerciful and somehow terrible; you felt in it the malignancy of the primitive powers of nature’

This indicates the claustrophobic atmosphere felt by the white-men. This effect is gained by the vocabulary used. The way that unmerciful is used indicates very strong feelings towards the rain, in the times that this would have been written it would have been quite a swear or curse word. ‘Malignancy’ is interesting, as it means growth. I think that this is meant to indicate the growth and the size of the amount of rain. Power is also a key word, as you would not usually associate the word power with rain. This shows how indeed heavy the rain is.

‘It did not pour, it flowed. It was like a deluge from heaven, and it rattled on the roof of corrugated iron with a steady persistence that was maddening

The vocabulary used here is powerful and shows the full extent of the rain. The words not pour, but flowed are interesting because we usually associate pour with rain, but flowing means constant water. The word deluge means flood. This is interesting as it fits as a flood from heaven. This is powerful as the image of a flood is devastating. The word maddening at the end has significance, as it is another hint that the island is winning the battle of trying to drive the white men of the island. The rattle on the roof is a good use of onomatopoeia because it makes the reader think about the persistence of the noise from the roof.

‘It seemed to have a fury or its own. And sometimes you felt like you must scream if it did not stop, and suddenly you felt powerless, as though your bones had suddenly become soft; and you were miserable and hopeless’.

This passage shows how the rain can make the characters very depressed. The use of the powerful words such as ‘scream’ and ‘miserable’ and ‘hopeless’ shows the depression that the rain brings to the characters. It shows their weakness towards the rain, and how it is starting to have an affect on them wanting to leave the island.

The other noticeable device used here is the description uses the second person singular person (You) many times ‘you felt it’ for example.

I think that the use of rain is very important in this story, hence the title of the story being rain. I think though, it is not a very obvious device, and I also feel that it does not intend to be an obvious device, but it is a very important one. I think there are two main reasons that the rain is used. To demonstrate the fight between the white-men and nature, nature not wanting them there; Also to sullen the mood, and when bad moments touch the characters, the rain is reminded of again to make the bad mood even more depressing. I think that the two devices are used well, and it does make the reader think about how the characters are coping.

Rain by Somerset Maugham - Comment on the significance of the recurrent image of rain in this short story. (2020, Jun 02). Retrieved from https://studymoose.com/rain-somerset-maugham-comment-significance-recurrent-image-rain-short-story-new-essay 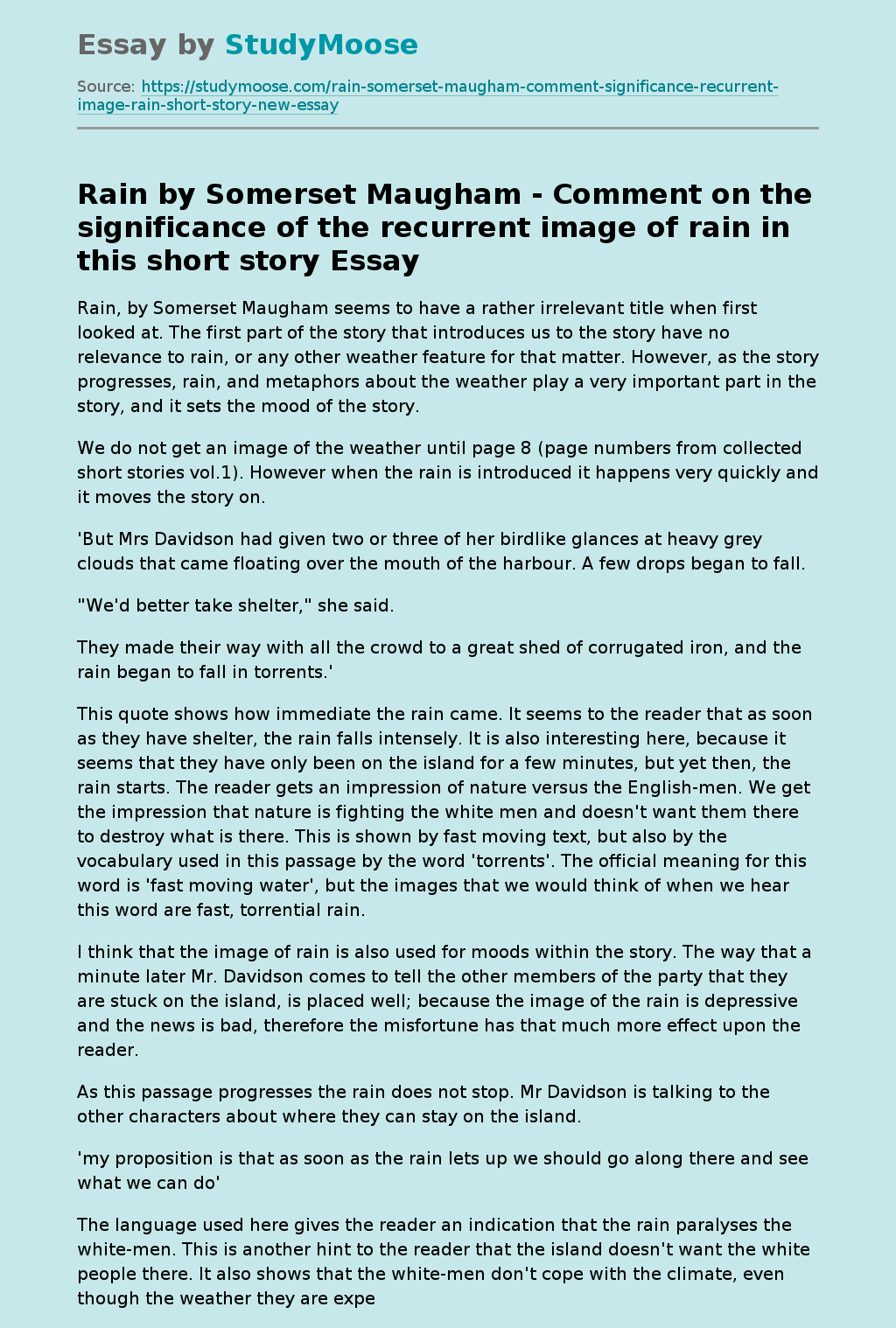