On the brink of joining World War I, the United Kingdom set up a draft system to recruit young men into the military. This system set limits on sex, physical disabilities, marital status, and of course, age. Although Edward Thomas fell outside of these restrictions, therefore saving him from ever having to dress in uniform, a patriotic Thomas still wanted to serve his country, so he enlisted. However, before fighting his battles in Europe, Thomas wrote the famous poem, “Rain,” in which he discusses the pains of death and war.

Don't use plagiarized sources.
Get Your Custom Essay on “Rain” by Edward Thomas Just from $13,9/Page

Thomas creates a speaker with whom he can relate and uses this speaker to represent the possible scenarios and feelings that he may face in any future warlike situations. In “Rain,” Thomas’ diction, organization, and punctuation all paint intense, disturbing images, which in turn convey the poem’s main theme of war and death.

Thomas’ diction plays an essential role in reaffirming the poem’s main theme. This is evident in the first lines of the poem when he writes, “Rain, midnight rain, nothing but the wild rain / On this bleak hut, and solitude, and me / Remembering again that I shall die” (1-3).

The word “rain” is repeated three times in the first line, initially alone, then with the preceding adjectives “midnight” and “wild.” All of these words describe the Thomas’ surroundings and symbolize his loneliness. The first “rain” stands alone with no adjective, just as Thomas is alone, while the second and third “rain” are described by midnight and wild, which describe his surroundings and state of mind. These ideas become more obvious in the second line, as Thomas uses the word “solitude,” reiterating his aloneness.

In terms of diction, Thomas additionally incorporates several similes into his poem. In line 13, he writes, “Like a cold water among broken reeds,” referring back to a supposed loved one hopefully not being “helpless among the living and the dead” (12). This simile paints an extremely morose picture, further illustrating Thomas’ inner feelings and pain. The adjectives cold and broken in this simile particularly emphasize these feelings. Another simile is found in lines 15 and 16 where Thomas writes, “Like me who have no love which this wild rain / Has not dissolved except the love of death.” Now, Thomas is saying that he lacks love because the rain has melted away whatever love he had. Now, he is only left with love for death because he feels so tortured in his situation in the cold, “wild rain” (15).

Essentially, this poem can be divided into two parts; the first of which, Thomas is writing in first person, sharing his inner feelings about himself; the second part in which he still discusses his inner feelings, however this time, those feelings are about others, not himself. These parts divide at the end of line 7, where a colon clearly marks the spot. Ultimately, the Thomas is frightened by death, and perhaps is envious of those who have died. He wants to free himself of the torture he suffers waiting for his death and just wants to get death over with, as he says, “Blessed are the dead that rain rains upon” (7). Here, the dead are blessed because they no longer have to endure the angst and torment of wondering when death will happen. Death is not an option; there is merely a matter of time before it does happen, but it is sure to happen in this war. Notice the “rain” only “rains” upon the dead – it does not torrent or downpour, thus, it paints a more peaceful image. These dead are deservingly being cleansed and washed of all bad that has happened to them as the rain patters serenely on their lifeless bodies.

In the second part of this poem, Thomas is thinking about his loved ones and hoping that they are not listening to the rain as he is – awaiting death “or thus in sympathy” (11). His loved ones are most likely his fellow comrades, friends, and family. He hopes that none of his comrades are lying in the alone in this rain, experiencing a painful death, and he hopes that his friends and family are not lying awake in their beds worrying about him. And should his comrades be dying on the battle field, he further hopes that they are not “helpless among the living and the dead” (12). The speaker envisions dead bodies all around him – “Myriads of broken reeds all still and stiff” (14), and he feels very alone, as he repeats the word “solitude” twice in lines 2 and 6 and “solitary” in line 10. He does not want his loved ones to feel this same way.

In the last two lines of the poem, Thomas steers away from his thoughts about his loved ones, as he creates a more personal tone than the preceding lines in the second part. In these final two lines, Thomas discusses how he may have to disappoint his love in order to do “what is perfect” (17). In this sense, “what is perfect,” may actually mean what is right or what his heart tells him – enlist in the war and fight for his country. Here, the tempest, or rain, is telling him not to disappoint himself and do what he feels in his heart. Throughout the entire poem, Thomas has struggled with these images of war – being in the darkness, alone – but in the end, he knows his fate will be death. It is just a matter of how he chooses his death, whether it is in battle or growing old at home with his family and friends, so long as he doesn’t disappoint himself.

Thomas’ ideas about death are reinforced by the poem’s punctuation and caesura. This poem is comprised only of two sentences, the first ending at the end of line 6. Line 7 serves as a transition line into the next sentence, which begins at line 8. All of the poem’s caesura can be found at the end of these sentences. In all other lines, except 6 (the end of the first sentence), 7 (line ends with a colon), and 18 (the end of the second sentence and poem), enjambment occurs. Thomas utilizes this sentence structure as a metaphor for his feelings, which he expresses throughout the poem. Effectively, the speaker’s thoughts are scattered, but continuous – reflecting on his current physical situation in the rain storm, dreaming about his loved ones, and eventually facing his fears of death – just like the sentences in this poem. These sentences are somewhat run-ons, symbolizing the continuous thoughts of Thomas, but eventually, and sadly, Thomas’ life must end, just like the poem.

Death is, unfortunately, an occurrence that we must all ultimately face. Since Thomas wrote this poem before he joined the war effort, he did not actually know what it was like to fight in battle. However, through this poem he was able to articulate his thoughts and anticipate the feelings of being a soldier in war. The imagery that Thomas is able to create through his word choice and punctuation is dark and distressing, yet very real. Thomas’ use of similes further exaggerates his inner feelings as a soldier. The only love that Thomas possesses by the end of the poem is “the love of death” (16). How unbearable it must feel to be so desperate that you await death to put you out of your misery. 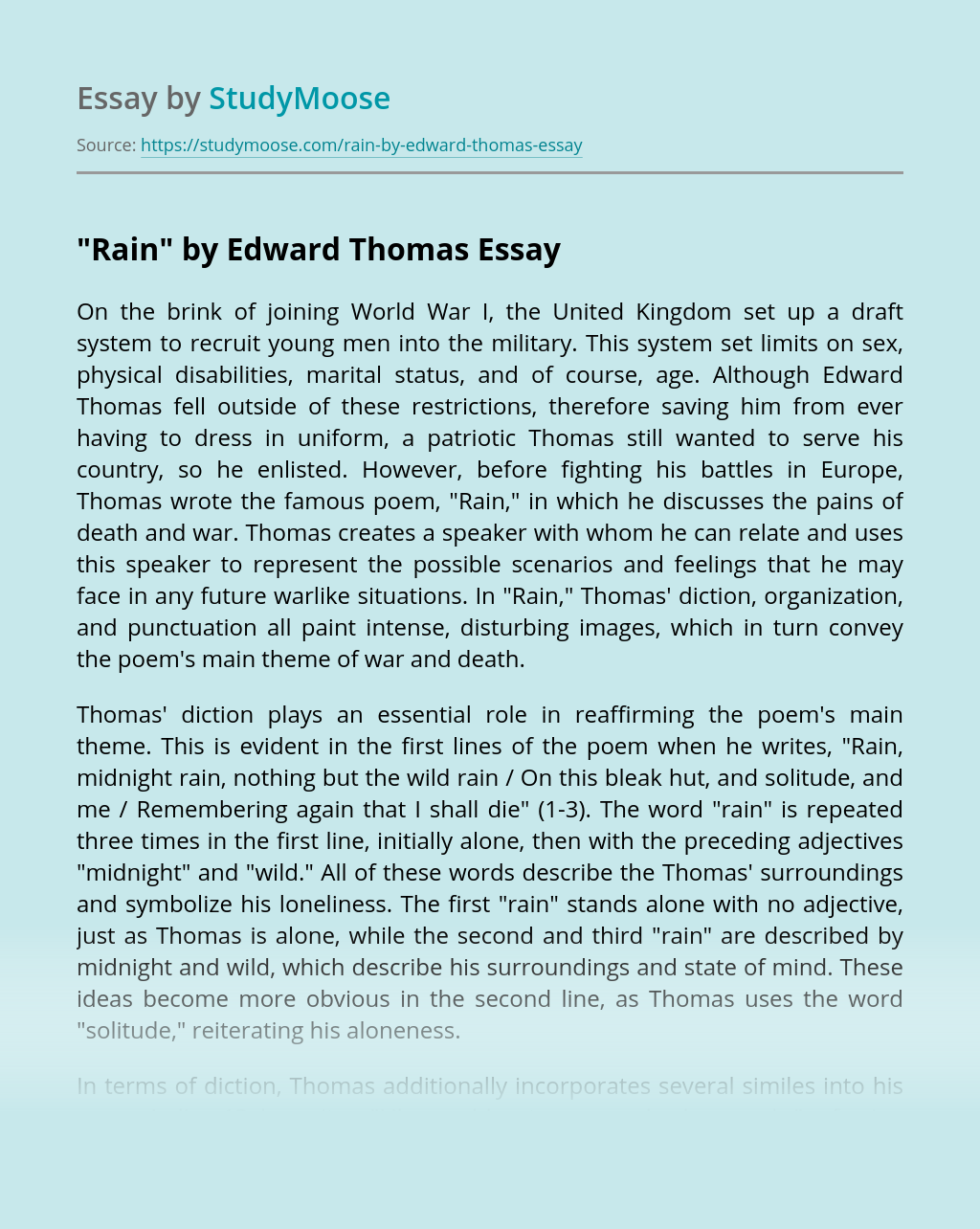 The Theme of Death in Selected Works of Ernest Hemingway

Ernest Hemingway wrote about death in many of his short stories. He often suffered from bouts of melancholy and his depression made a strong impact on his literary works. Many of Hemingway’s short stories show a common theme: that of someone waiting for death. “It is man’s attitudes toward life in the presence of death...

On the brink of joining World War I, the United Kingdom set up a draft system to recruit young men into the military. This system set limits on sex, physical disabilities, marital status, and of course, age. Although Edward Thomas fell outside of these restrictions, therefore saving him from ever having to dress in uniform,...

Jacques-Louis David studied painting in Rome where he was able to absorb the classical sprit of Ancient Rome (Fleming, 1995, p. 496). He was influenced by Enlightenment philosophers such as Diderot, and from them, he developed the idea that paintings should have a message that points to political and/or social action (Fleming, 1995, p. 496)....

Death of a Saleman - Happy Loman

Happy shares none of the poetry that erupts from Biff which is buried in Willy– he is the stunted version of Willy’s worst qualities and the personification of the lie of the happy American Dream. As such, Pleased is a hard character with whom to understand. He is one-dimensional and static throughout the play. His...