This film follows the life of Forest Gump who struggles to live outside the barriers that society has given him. Forrest is a little ‘slow’; although his mental impairment doesn’t seem to bother him. In fact, the naiveté that comes from his limited understanding of the world around him gives Forrest a uniquely positive perspective of life. Forest overcomes the challenges in his life, becoming a star football player, a war hero, a successful businessman, and something of a pop icon.

Through it all, however, there is one defining element in his life: his love for Jenny. She is never far from his thoughts, no matter what he’s doing or where he is. I believe the director uses the character Forrest Gump to convey the thought that most people are too smart for their own good; he uses Forrest in order to show the audience that escaping from the realities and actualities of the world can have positive outcomes throughout life.

While other characters in the film struggle with conflicts in society, Forrest remains unaware of them; this allows him to live in the moment.

Forrest goes out of his way to do what is right, as opposed to what is easy, I believe that this movie asks me to look at the imperfections within myself and calls me to become a more selfless person. I highly recommend this film to year 12 students, Forrest has an ability to truly humble another human being, and his optimism, freshness, and emotional honesty are just a few qualities that he teaches us throughout the film.

The movie does not seek to reduce every member of the audience to tears; it does however have moments where the true power of message comes from the simplest of things. For example, Forrest says to anyone that will listen, “Life is like a box of chocolates, you never know what you’re going to get.” Through this quote we see that Forest is able and willing to go through life taking every opportunity given to him, I believe the way he sees the world is incredibly unique and that I have benefited from seeing his views of life, in many ways this film has changed my perspective of life and I believe that year 12’s will find this film highly enjoyable and beneficial.

I believe an aspect that makes this film beneficial for all year 12 students is that it addresses the perspectives of war. The movie shows the different perspectives of the Vietnamese war, in scenes we see thousands of protesters protesting and in the very next frames we see supporters rallying together and congratulating the returned men. This contrast is highly refreshing, it is not common in movies to show multiple perspectives on war; however the film Forrest Gump manages to show the audience three perspectives. During the 60s and 70s, no topic was of higher debate than that of the Vietnam War and those who were sent overseas to fight. Forrest, as might be expected, has a singular viewpoint on his time spent in Vietnam, he narrated during the film saying, “We took long walks and were always looking for this guy named Charlie.” In Forrest’s observation of the war we see that although he was fighting willingly, he did not know why or what he was fighting for.

I believe that this is the underlying message that the Director is trying to portray, on one side of the line there are those for the War, on the other are those against it and in the middle is Forrest Gump. In many ways Forrest teaches us about governments exploiting its citizens, he was sent to a place where he may have died and yet he did not understand why he was there to begin with, however he did enlist himself for the war. I struggle with the double meanings throughout the movie, we see the positives and the negatives of war through the death of Forrest’s best friend, Bubba, and the medal Forrest receives for saving Lt. Dan.

In the end I’m left just as confused about the war as Forrest Gump is about life. I challenge year 12’s to watch this movie, keeping in mind that everything Forrest says means something deeper than the definition of each word that leaves his mouth. I believe that the character Forrest Gump teaches me to treasure the moments in my life and to understand why I’m doing what I’m doing. Especially in scenarios that can affect other people. He is some sort of inspiration to me; this is however not in the usual context. He inspires me to never enter situations where I do not fully comprehend nor understand the consequences of my actions, he inspires me to never let someone take advantage of me and he inspires me to just simply, be me.

Throughout the entire film we see Forest Gump’s tragic life; nearly everyone he holds most dear to him dies. Life can be brutal at times, I found myself crying during the moments when Forrest’s life seemed painfully hard. In some ways I could see that with every loved one that he’d lost a part of him had died with them. I can understand this feeling as my best friend’s father passed away only three years ago this month. As she is growing up, she is realising the disadvantages of not having him with her, knowing that he is not there to teach her how to drive or help her get her first job. I see her pain and I know that there is nothing I can do to stop it, I am powerless. I believe that there is finality in death, however in this film Forrest teaches the audience that a part of us may die with a loved one, but that doesn’t stop life from coming back to us. The underlying message that Forrest has to offer on the subject of death is that you should never let heart-break or tragedies take over your life.

Forrest accepts that dying is inevitable, “Momma always said dying was a part of life,” he says. “I sure wish it wasn’t.” Death occurs not only in Forrest’s personal life, but also in the larger community. This film has a historical setting and we see the main events of the 60’s, 70’s and 80’s through the eyes of Forrest. In this era, death of high valued people within America rocked the foundations of its society; numerous assassinations took place including JFK, RFK and John Lennon. Forrest struggles with the necessity of death as he watches those he loves fall to illness and war and those he admires fall to random attack. During this time the death of Martin Luther King Jr. created the greatest conflict within society and he is still remembered to day for his fight against racism and war. The King family and others believe that the assassination was carried out by a conspiracy involving the US government and that James Earl Ray was a scapegoat.

At the time the thought of this alone was enough to spark a civil war within America, although this was avoided by Senator RFK, who spoke to a crowd directly after being informed of Martin L. King’s passing. In his speech he said, “I had a member of my family killed, but he was killed by a white man.” RFK’s attempts at avoiding severe rioting based on race was only semi successful, however his speech is widely considered one of the greatest speeches in American history. King was a beloved leader in the civil rights movement, and also an advocate for nonviolence. His death led some people to feel angry and disillusioned; from his death they began to believe that the only effective resistance to racism is violence. King was used as a martyr, however his cause for non-violence was ignored and he was used as a reason for blacks to shed blood.

Dying is a part of life, only two months after RFK said his speech he too was assassinated, this shows that it does not matter who you are or if you are ready to die because in the end death will come for you when your least expecting it . I don’t expect to die anytime soon. But Forrest’s life teaches me that it could happen this moment, while I am writing. Steve Jobs once said “No one wants to die. Even people who want to go to heaven don’t want to die to get there. And yet death is the destination we all share. No one has ever escaped it. And that is as it should be, because Death is very likely the single best invention of Life. It is Life’s change agent. It clears out the old to make way for the new.” I believe this quote shows that death is inevitable, in the end we all die, we may try to avoid death but it will always come for us one day, it may be tomorrow, it may be in fifty years from now, but it’s coming for us all. 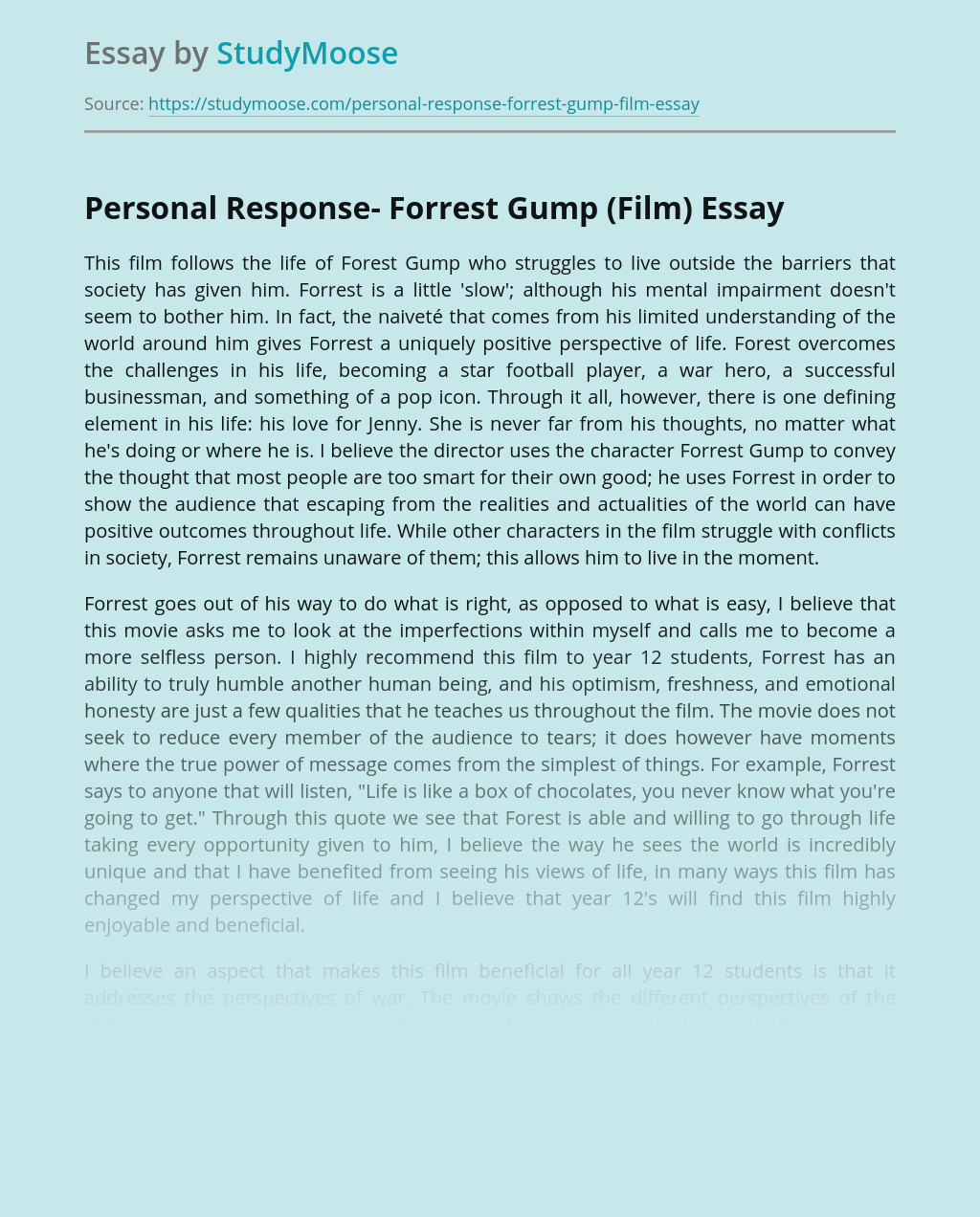