Forrest Gump is one of my favorite movie of all times. It stars Tom Hanks as Forrest Gump, very innocent minded man going through many difficult situations and overcoming them. The story isn’t about a hero, a ticking clock or a villain. It is just a remarkable story of a young man going through his amazing life. Metacritic.com says that it is one of the movies you must see before you die and I must agree! It has won six Academy Awards which includes best picture.

Don't use plagiarized sources. Get your custom essay on
“ Forrest Gump ”
Get custom paper
NEW! smart matching with writer

The cinematography and mise en scene play major roles in grasping the viewer, making the main character feel relatable and helped the viewers understand the time and place Forrest is in.

The first shot the cinematographer uses, which is my favorite scene, is the long shots used when following the feather in the open scenes of the movie. The feather flows from way up high in the sky to and lands on the bench Forrest sits on.

An example of very long shots in the film are when Forrest is running (all throughout the movie) and also during the war scenes. Cinematographer Don Burgess recalls, “With Forrest Gump, I felt very strongly about shooting anamorphic: it depicted the character’s relationship to the world and how he saw the world. I thought anamorphic lens worked so well, compositionally. With the character of Forrest Gump, I short-sighted him a lot to put him out of context, so he always felt odd with things around him.

The anamorphic format has a tendency to short-sight better anyway, and we used really wide lenses focused on him; I think it creates that feeling of his relationship to everything else.” I believe that the making Forrest stand out and not really fit in to his surroundings, yet effortlessly moving through the motions is captured by the use of anamorphic shooting. It also helps the viewer understand the time and place in which the story takes place and how the character relates to that period of time. However, the cinematography isn’t the only aspect of the filmmaking process that helps the viewer know the time and place; mise en scene also has plays an important role.

Mise en scene is French for “place on set.” It is the way props or objects are placed on the set in order to bring out the theme of a movie and make it more realistic for the time and place. Mise en scene can be like entering a time machine when done correctly and that’s exactly how I felt while watching Forrest Gump. From the beginning of the film, at the center of attention is the bench. The placement of the bench lets us know that it is at a bus stop as opposed to a park because a bus stops in front of it, people walk behind and in front of the bench, and also the bus stop sign placed near it. Mise en scene can also be symbolic.

There are many examples throughout the film but my favorite is the signed Marilyn Monroe picture behind the picture of the Kennedy Brothers at the Watergate Hotel. Its a bit scandalous and fun since Marilyn was rumored to having affairs with both brother and it also brings out a little bit of history, which I love. Also, in one of the scenes where Forrest is running, there’s a confederate flag on the car. Since they’re in the south and many people believe Forrest symbolizes America, it can be presumed that America is running or moving past its racists history. That’s just one theory. There are so many more examples of mise en scene but that would turn this journal into a ten page paper.

Forrest Gump has won an Oscar for Best Picture, Best Actor in a Leading Role, Best Director, Best Writing, Best Film Editing and Best Editing and nominated for six more Oscars, Best Cinematography among them. I believe that all the elements that go into making a film made this movie great but the cinematography and use of mise en scene really made it outstanding. 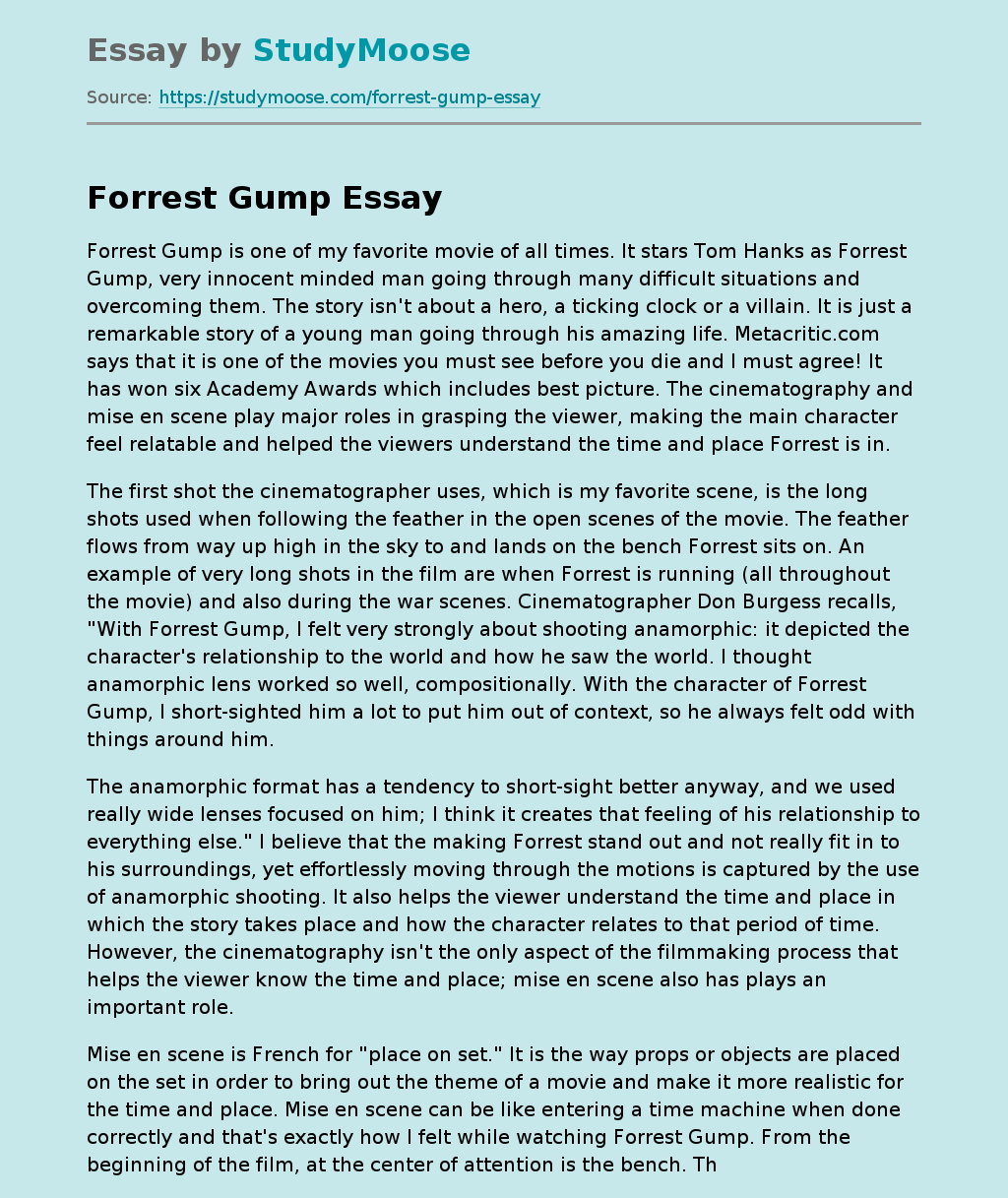