From the opening of the 1993 film, there was an effort to provide the ironic background for the film’s resolution at the end. Considered as one of the funniest and well-thought films of its era, Groundhog Day prompts audience not to watch the characters learn but to create personal realizations based on the premise of the story. The main protagonist’s, Phil Connors, sentiments to the town’s locals reflects the sentiments of many individuals who feel that they are caught up in the grind of daily life which offers neither value or fulfillment.

Don't use plagiarized sources.
Get Your Custom Essay on Cinematography in Groundhog Day Just from $13,9/Page

The opening questions reflect the underlying theme of the story, delivered in Connor’s drab and at times listless monologue, which explores the how people create value and relevance in their lives. A key strategy to the success of the film is the combination of effective dialogue and cinematic techniques that reflect the stages of self-realization in the story. At the conclusion of the story, audiences feel as if they have been waking up to Sonny and Cheer’s I Got You Babe for a thousand times.

Cinematography and Groundhog Day In the opening of the film, Connor is portrayed as the odd man out of the setting: though he is a focal point in the frames, he is represented more as a negative space rather than part of the overall image. At the same time, during the development of the story, Connors is portrayed by his dialogue and manner as an individual who has deliberate set himself apart from the rest of the town and his co-workers.

Reflecting on the theme that, “its choice, not chance, that determines your destiny”, this suggests that Connor’s perceived superiority over his situation and the other characters of the story is one of his own choice and is independent of the validity if the customs behind the celebration of Groundhog Day. The cinematography of the movie, directed by John Bailey, follows intimately Connor’s self-realization. Some of the main strategies used to delineate the Connor’s experience and realizations include variances in focal length and fields of focus, filters, camera movement and lighting.

On the other hand, stock, lens and aspects of the film remain uniform throughout the film. The latter is a means to establish continuity in the story and to emphasize the repetitiveness of Connor’s experience. Overall, the films cinematography worked effectively with other elements of the film, particularly its music and soundtrack, to develop an effective and memorable story for its audience. Focal Length and Fields of Focus One of the more obvious cinematographic techniques used in the film used focal length and fields of focus.

Used both as a means of contrast and inclusion, Connor grow more and more aware of his environment: initially, his motivation is to be separate and manipulate its environment but eventually he becomes part of the backdrop of the events of the day. Throughout the film, these two elements have been the main means by which the film communicates to the audience the development of theme and the characters as can be illustrated by the first and concluding scenes.

The first scene concentrates on Connor’s dialogue with the locals regarding the day. In these scenes, the profile of the actors dominates the screen and though there are numerous references to the settings or to the event, there is little peripheral visual information provided to the audience. In limiting both the focal length and the field of focus on Connor, the suggestion is that the film is about his perceptions and emotions rather than any other element of the story.

In contrast, at the end of the film, particularly in the scene with co-protagonist Rita, they are to be the primary characters of interest but there are more elements of the settings and supporting characters included. There is a direct relationship with the focal length and fields of focus with the story itself. As Connor becomes more aware of the town of Punxsutawney, its inhabitants and the day’s celebrations, the scenes become more prominent in focus instead of being just backdrops for his character.

Supporting the idea that of choice over fate, there is a suggestion that as Connor takes more active roles in creating better scenarios for the town, the more he becomes empowered and part of it. The use of focal length and fields of focus is critical in emphasizing this development because it allows the characters to share the experience of Connor’s character. It should be noted that whenever Connor is evaluating the town or other individuals in the story, a point of view is perspective is used which allows audiences to see through Connor’s eyes.

Filters, Lighting and Camera Movement Every effort to create naturalism has been made to support the idea that nothing of the extraordinary, except from the point of view of Connor, is happening in the town. From the development of the background of the town, Punxsutawney is a typical town, even archetypical of small rural communities that have sought to maintain local traditions while at the same time trying to become more commercialized and urban in nature. The suggestion is that though the town was in an extraordinary circumstance, the day being Groundhog Day?

the local characters and rhythms are the actual pulse of the story. Thus, the lighting of the film uses natural light predominantly, varying from daylight for outdoor scenes and white light for others. The focuses of lighting are the characters themselves, particularly on facial expressions and interactions. This further supports the emphasis on the characters’ experiences of the circumstances of the story. The filtering and hue of light also encourages audiences to focus on empathizing with the events and characters instead of focusing on individual details of the story.

Thus, when these details become of particular interest, such as in Connor’s synchronization of events when he robbed the bank’s truck, the audience realizes at that moment the significance of those details and not before. Furthermore, the movement of the camera also suggests an emphasis of the characters. By cutting intermittently en point with the characters’ dialogues, the audience is made to focus on the exchanges of individual characters rather than on the scene as a whole. Conclusion

Like Connor, it often takes a closer, and as the film’s suggestion, even repetitive and exhaustive reflection on everyday things that people can create relevance and value in life. As seen in the cinematography of the film, what is often in the periphery of our awareness is actually what is most important in life. Like Connor, relieving a day seems like the perfect means to correct mistakes or to change one’s destiny but in the end, Connor was only able to see the next day by letting go of his preconceived notions on what he wants it to be.

Though some may consider this as giving control over to fate, the reality is that even as Connor manipulated the day, he was at its mercy and it was only when he decided to accept his role and responsibility in it. Groundhog Day is not a film that causes its audiences to have notable reactions while viewing in. In fact, the success of the film came later when it become popular in was released for home viewing (Kuczynski, 2003). It is the type of film whose message is delivered seemingly in afterthought: it becomes funnier and more poignant as one reflects on it and parallels the characters’ sentiment into ones own life. The power of choice over fate is not delivered in an over sweeping manner but rather in a way that gains credence by its universality in any setting or situation. 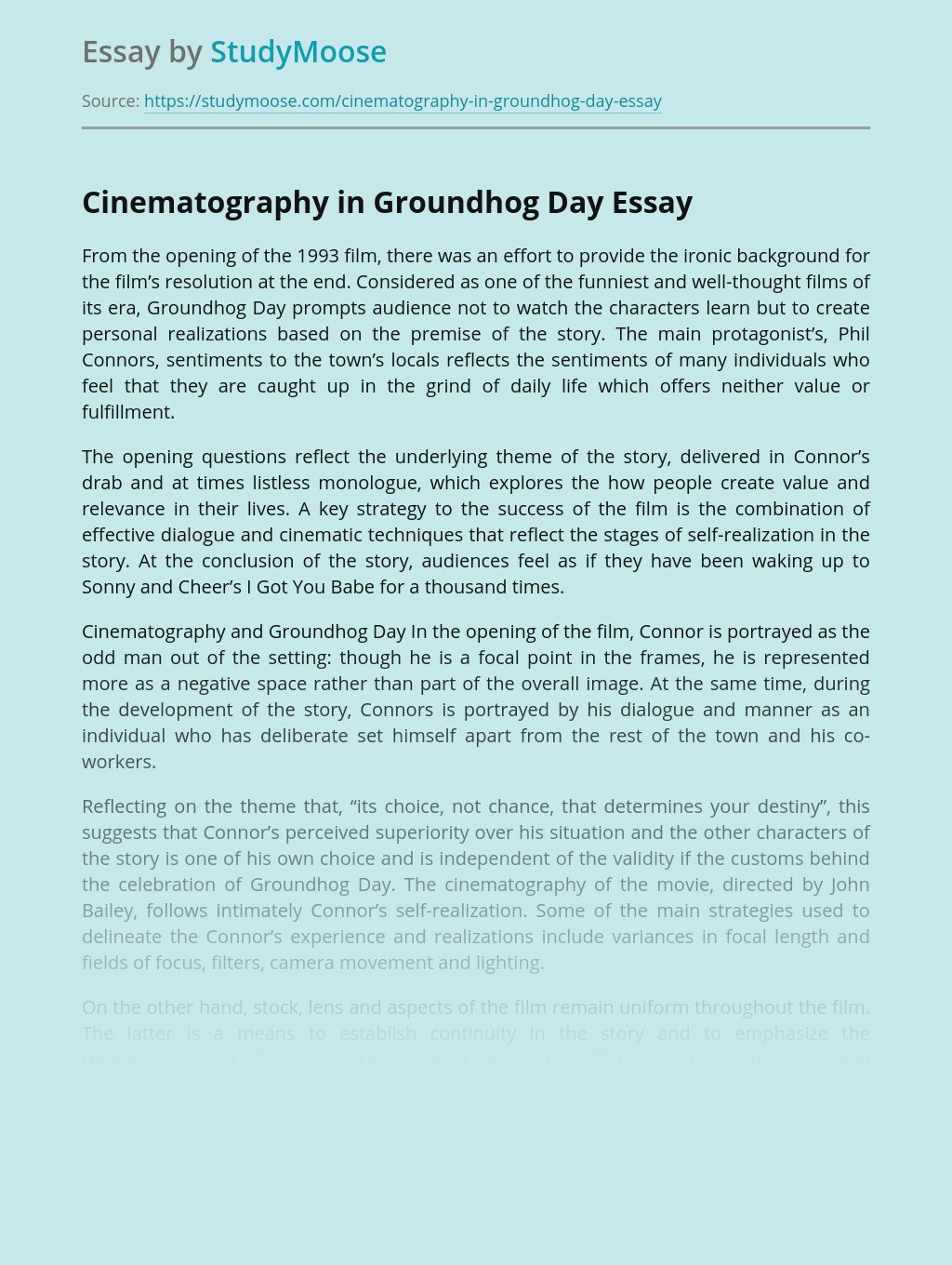 Analysis of "Raise the Red Lantern"

Yi-Mou Zhang’s Raise the Red Lantern, is a beautiful and brilliantly made film in its own right. If, however, the team of Orson Welles and Greg Toland had produced the same film it would take on an entirely different look and feel. The film would reflect Wells love for creating physical representations of thematic metaphors...

Although many realist films tend to realize that the viewer is an observer, there is a theme that is clearly established in the first few minutes of Rear Window (Alfred Hitchcock, 1954) with a variety of long shots that clearly show the setting; complimenting this Hitchcock also utilizes pan and dolly as well as transitioning...

Get Essay
Cinematography in Groundhog Day

From the opening of the 1993 film, there was an effort to provide the ironic background for the film’s resolution at the end. Considered as one of the funniest and well-thought films of its era, Groundhog Day prompts audience not to watch the characters learn but to create personal realizations based on the premise of...

How has the feature film you have studied captured and sustained the viewers interest? Yes exactly and today in my seminar I will identify these key words to analyze and answer this question. In the film ‘A Beautiful Mind’, the director Ron Howard, along with writers, producers etc have used many techniques in order to...

Have you ever wondered what it was like behind the scenes while watching one of your favorite movies of all time? Well, there is a lot that goes on behind the scenes that some individuals never even think to think about. In the film Training Day, there are many fascinating aspects that all went into...