The Negro Speaks of Rivers

“The Negro Speaks of Rivers” is Langston Hughes’s most anthologized poem. Hughes wrote this brief poem in fifteen minutes in July, 1920, while crossing the Mississippi on a train ride to visit his father in Mexico. It is one of Hughes’s earliest poems, and its subject established the emphasis of much of his subsequent poetry. Hughes’s poems may be divided into several categories: protest poems, social commentary, Harlem poems, folk poems, poems on African and negritude themes, and miscellaneous poetry on various other nonracial subjects and themes.

Don't use plagiarized sources. Get your custom essay on
“ The Negro Speaks of Rivers ”
Get custom paper
NEW! smart matching with writer

“The Negro Speaks of Rivers” centers on African and negritude themes. Hughes’s writing always shows an identification with Africa, and his later poetry on African subjects and African themes demonstrates his growing sophistication and knowledge of the history and problems of Africa. Along with its emphasis on African themes, this poem so poignantly and dramatically expresses what it means to be a black American that it helps to assure Hughes’s continuing fame.

Through the images of the river, Hughes traces the history of the African American from Africa to America. The muddy Mississippi makes Hughes consider the roles that rivers have played in human history. The first three lines introduce the subject of the poem. The primary image of water symbolically represents the history of humanity, acknowledging the fact that rivers are more ancient in the history of the earth:

I’ve known rivers ancient as the world and older than the flow of human blood in human veins.

The next line connects the poet with the river and acknowledges the influence of waterways on the history of the African American: “My soul has grown deep like the rivers.” This line is repeated at the end of the poem, reestablishing the connection between the human essence and the river as well as the river’s role in African American life.

The middle section reveals the connections between the history of the African American and four important rivers of the world: the Euphrates, the Congo, the Nile, and the Mississippi. The three African rivers are a part of the ancient history of black people when they were free, living in majestic kingdoms and forming the great civilizations of Africa. The poem more specifically relates to the African American, who is the victim of slavery and discrimination in the New World, where rivers were used to transport black slaves.

The last section of the poem, “I’ve known rivers:/ Ancient, dusky, rivers// My soul has grown deep like the rivers,” re-emphasizes the beginning section by restating the influence of rivers on the soul and life of black people from antiquity to the twentieth century. (Langston Hughes: www.kirjasto.sci.fi) The final line of the poem repeats the statement that connects the human soul to the rivers of the world.

According to my point of view, “The Negro Speaks of Rivers” is a lyric poem. Lyric poetry is rooted in song and establishes the ritual of the human condition, in this case the condition of black people. In this poem, Hughes is both teller (poet) and participant (African American) in the drama being described. Through the intense images of this poem, the reader is able to participate in the emotion and poignancy of the history of black people. Since Hughes discusses this history beyond that in America, he transcends localism and projects upon his reader a world experience.

The diction of the poem is simple and unaffected by rhetorical excess. It is eloquent in its simplicity, allowing readers of all ages and levels of sophistication to enjoy a first reading; however, as one reads this poem, the deeper meaning reveals itself.

The primary image of “The Negro Speaks of Rivers” is water; its function as the river of time is to trace the heritage and past of the African American. The flowing, lyrical lines, like water, are charged with meaning, describing what the river has meant to black people in America. Hughes’s poetic ability and technical virtuosity are nowhere as evident as in this short poem, which formed the basis for his early acceptance as a brilliant poet. Hughes uses the repeated line “My soul has grown deep like the rivers” to emphasize the way rivers symbolize not only the physical history of the African American but the spiritual history (“my soul”) as well. The river is also a symbol of the strength of black people as survivors who move through history. Finally, the rivers reflect the direct path of blacks to America.

The entire poem is based on an extended metaphor comparing the heritage of the African American to the great rivers of the world. The poet reveals the relationship between the river and the lives of black people, starting with a river known to be important during the earliest great civilizations and ending with a river on which slaves were transported, to be bought and sold in the slave markets of America.

As I think, Langston Hughes was deeply concerned with the history and social condition of his people. “The Negro Speaks of Rivers” reflects the poet’s interest in both topics. This poem also speaks of a mystic union of blacks throughout the world, for it traces their history back to the creation of the world, giving them credit for spanning time and for founding the greatest civilizations that humanity has ever known.

Hughes received the inspiration for this poem as he crossed the Mississippi River by train, feeling melancholy yet drawing pride from thoughts of the rivers that played a part in the history of his race. The images of beauty and death, and of hope and despair, all fused in his adolescent sensibility, causing him to create one of his most beautiful poems. The use of words such as “soul” and “rivers” allows Hughes to touch the deepest feelings and spiritual longings of his own soul and the souls of his people. With the use of the words “deep,” “flow,” “dusky,” and “ancient,” Hughes describes the actual rivers that were involved in black history, all the while emphasizing the long and glorious history of his race. With this poem, Hughes, often called “the poet of his people,” plunges into the deep well of African American history, uniting it with global African history.

The poem, with its allusions to the setting sun, human blood, and deep, dusky rivers, suffuses the images of death as it speaks of the immortality of the soul. Hughes celebrates the life of black people by acknowledging death, but the images of death presented in the poem are overshadowed by emphasis on the life of the soul—in this case, a racial soul which runs throughout time like a river. As the muddy water of the Mississippi turns golden in the sunset, so does the poet turn the memory of the history and survival of his people into brilliance. With images of water and pyramid, the verse suggests the endurance of the black physical presence and spirit from ancient Egypt to the nineteenth and twentieth centuries. The muddy Mississippi caused Hughes to think about the roles in human history played by the Congo, the Niger, and the Nile, as slaves were passed down these waters to be sold; once sold, these same slaves may have ended up being sold again on the Mississippi. The Mississippi also caused Hughes to think about Abraham Lincoln and the role he played in the abolition of slavery in the United States.

Pride in one’s history is a constant theme in the poem. Hughes views the history of black people, even in slavery, with a sense of pride as he points out the ability of his people to survive their harsh and violent treatment in America. Hughes’s confidence in the strength of blackness is a major part of his theme of pride; this confidence and pride is his legacy to African Americans. Black culture is still embattled, but Hughes provides a device for countering the argument that black people are without a vital and universal history.

The Negro Speaks of Rivers. (2019, Aug 19). Retrieved from http://studymoose.com/the-negro-speaks-of-rivers-essay 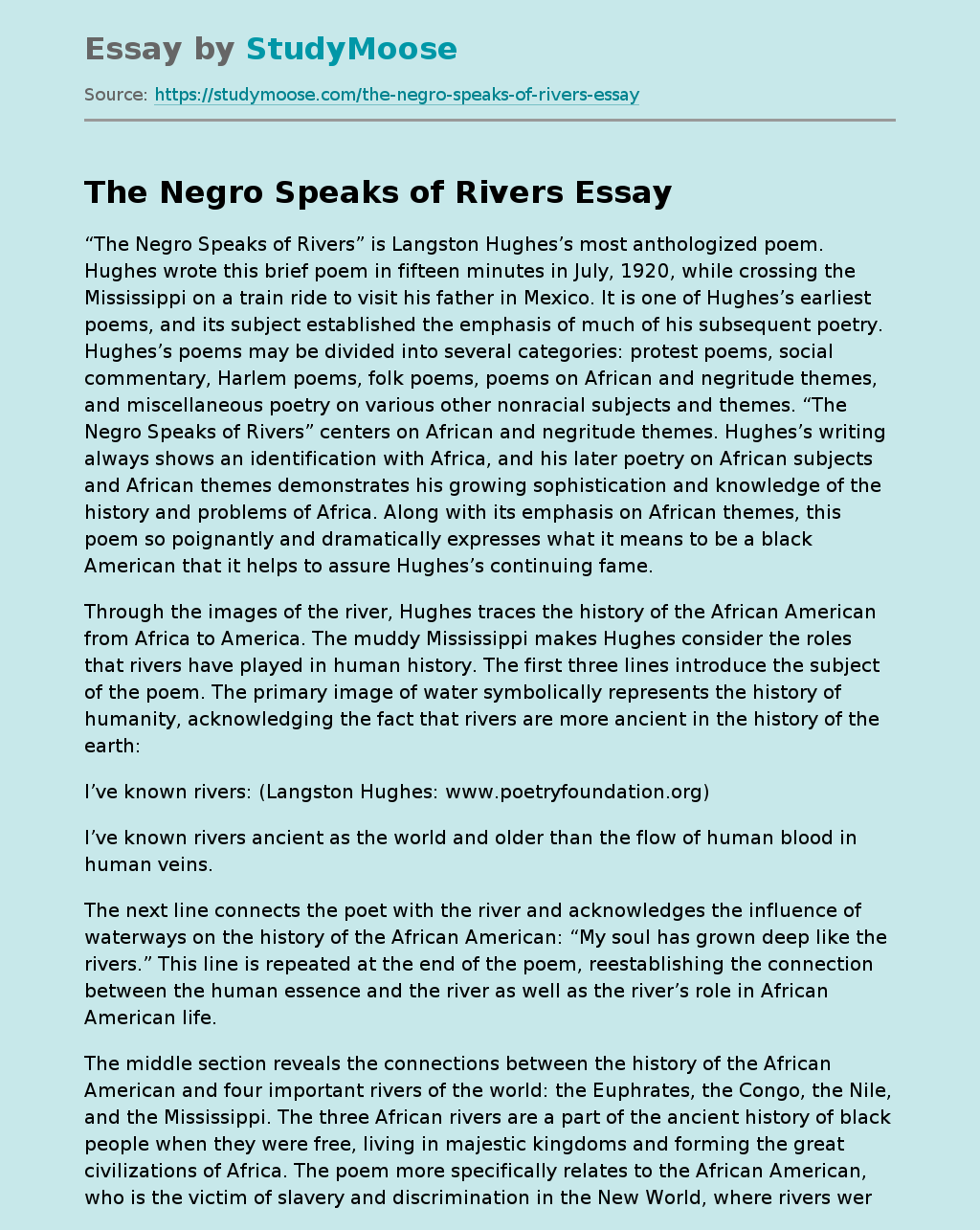