Culture instills a significant role in family life. Family traditions are often passed down from one generation to the next, and usually produce added complexity from outside influence over time. The original identity of the belief continues to be apparent, although more ideas have been added to the basic cultural belief. In Leslie Silko’s short story, “The Man to send Rain Clouds”, this predicament arises. Although a constant influence of Catholic beliefs are apparent in the Pueblo people’s society, Leon and his family still display their Native American identity through their actions present throughout the story.

Don't use plagiarized sources. Get your custom essay on
“ Man to Send Rain Clouds ”
Get custom paper
NEW! smart matching with writer

Silko explains that her people “were well informed about [culture],” and that “old traditions were dying out” (Silko, “Language” 772). The local Catholic Church’s minister, Father Paul, attempts to incorporate the Church’s teaching into the Laguna’s way of life. He shows great concern for Leon and his family “miss[ing] [Mass] last Sunday,” (Silko, “Man” 50), and requests the family to attend the following weekend.

Father Paul successfully influences Leon’s sister, Louise. When she finds out about her grandfather’s death, she suggests incorporating the ritual of pouring holy water on his gravesite “so he won’t be thirsty” (Silko, “Man” 50).

Although Catholic interference tries to influence the Native Pueblo culture, Leon constantly attempts to retain his Native identity. When Leon and Ken discover their Grandfather dead in the arroyo, they immediately perform the Native Pueblo customs. The customs included the painting of their grandfather’s face, tying a feather to his hair, wrapping him in a red blanket, and tossing cornmeal into the wind.

By performing these rituals, they “[keep] the family … and clan together” (Silko, “Language” 766), showing the great importance they hold upon their cultural beliefs. When transferring grandfather Teofilo back into town, Leon and Ken deceivingly tell Father Paul that “[Teofilo] won’t [be herding sheep] any more now,” (Silko, “Man” 50), in an attempt to hide their grandfather’s death to escape the Catholic rituals being forced upon him.

Even though Leon attempts to keep his Native identity, he eventually acclimates to his Catholic surroundings. He asks Father Paul to incorporate the holy water ritual in conjunction with the Native American burial. Leon exclaims that he “is happy [about] the sprinkling of the holy water,” because now his grandfather could “send them big thunderclouds,” (Silko, “Man” 52), just as he has wished earlier in the story. During the process of the Catholic ritual, even Father Paul “is reminded of something,” (Silko, “Man” 52), in regards to a connection between the two cultures beliefs. The pouring of the holy water displays a metaphor. The metaphor demonstrates, that if one finds similarities between different cultures, the ability to accept the idea into your own way of thinking, becomes much easier.

When cultures collide, their beliefs hold a tendency to influence one another. However, the original beliefs and values must be kept noticeable, or else the origins of the culture may die out. Silko’s explanation “[Cultures], bring us together, despite great distances between [them],” (Silko, “Language” 772), shows that the different beliefs people withhold brings us together. Although the Church attempts to influence Leon’s family, and Leon tries to keep the identity of his beliefs, they eventually concede to form what may be known as a new form of Laguna culture. 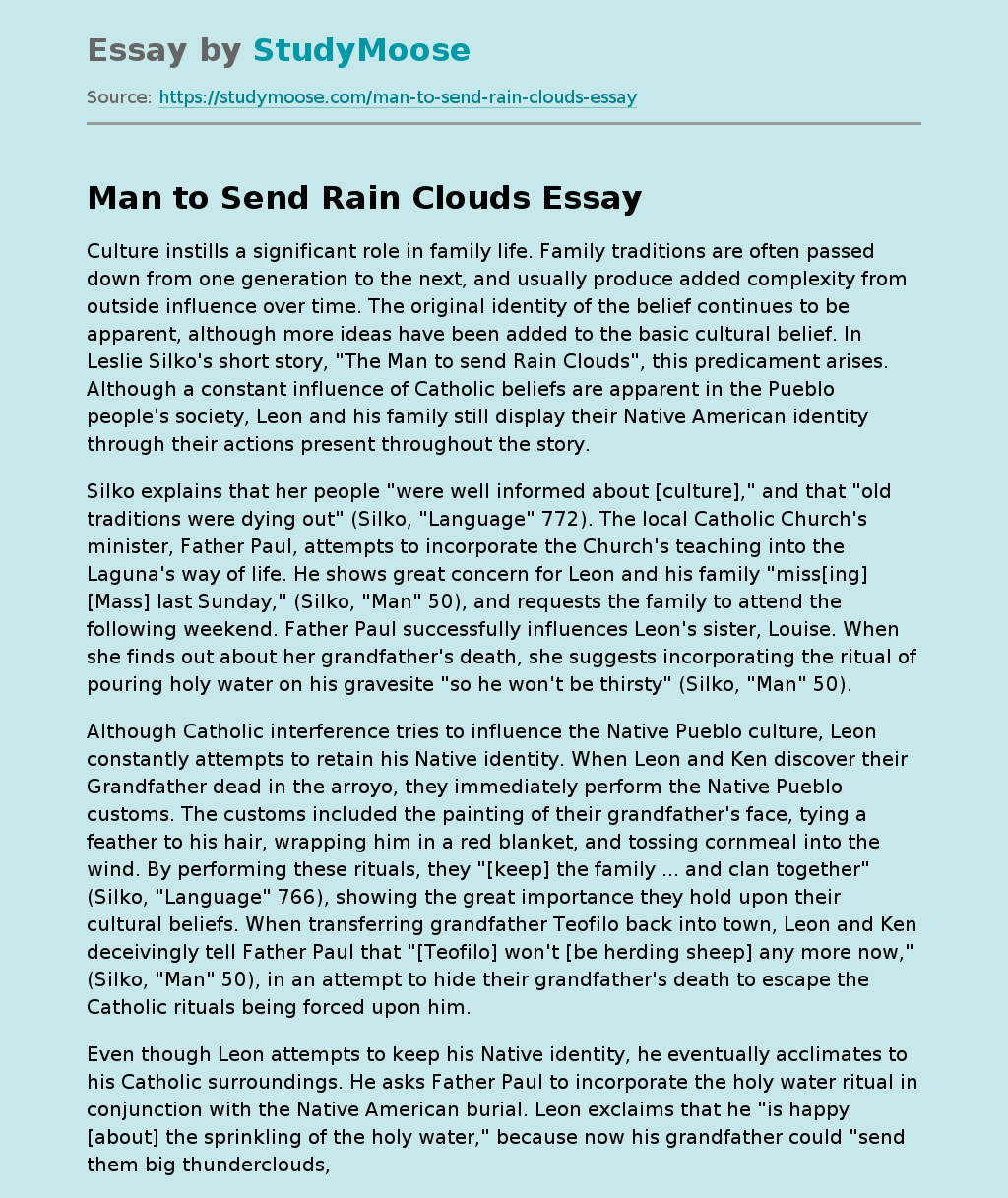