About "The Breadwinner" by Leslie Halward

“The Breadwinner” by Leslie Halward is a short story set in the 1930’s during the Great Depression. The father has lost his job and is relying on his son’s wages to support him and his wife. The man and women fight over Billy’s pay. Billy lies to his father, saying that he has lost the money but then there is a surprise when he gives it to his mother. The story takes place in a small house that is “meanly furnished”.

Don't use plagiarized sources. Get your custom essay on
“ About “The Breadwinner” by Leslie Halward ”
Get custom paper
NEW! smart matching with writer

This tells us the family are quite poor and are not living in the best conditions.

This makes it hard for them as they are reminded of how bad their situation is. We also see the family is poor because they are only having bread and butter for tea: “The mother was… cutting some slices of bread and butter for tea”. This shows they cannot afford much food and have to survive on the bare necessities. This adds tension to the house.

The author creates a vivid impression of each character and the relationships they have with each other. First impressions of the father suggest that he is fairly lazy and allows his wife to do all the work around the house.

At the very start of the story we are told that he is “sprawled inelegantly in an old armchair” while his wife sets the table. The man also clearly has no respect for his wife and tells her “shut your mouth”. The man and women constantly try to undermine each other.

The man’s relationship with Billy is no better. A short tempered side of him is revealed when Billy tells him he has lost the money. The man’s proceeds to beat his son: “he stepped back a couple of paces and took of his belt- a wide thick belt with a heavy brass buckle”.

The author does not show any signs of compassion between the man and his son We can appreciate how much pressure the father is under Because he has lost his job and can no longer provide for him or his family. Along with his job he also lost his authority in the house. There is evidence of this when the mother says “I put up with you when you were bringing money into the, but I’m not put up with it now”. This shows how much strain has been put on the family when he lost his job.

This may too be why he goes to the pub, to try and forget about his situation at home and meet with others in the same position. The mother is a very interesting character. She is portrayed as the sensible one of the parents. While the father wants to use the money to buy alcohol, the mother wants to spend it on food and rent: “It’ll pay the rent and buy us a bit of food, and not go into the till at the nearest public-house”. There is evidence that this causes regular conflict inside the house when it says she was “obviously repeating something she had said several times before”.

The mother stands up for Billy when he is being beaten by the man: “The woman leapt forward and seized the belt but… the husband pushed her aside easily”. This tells us the women is very protective of her son and will put herself in danger to stop him from being hurt. Another piece of evidence that shows that the woman cares deeply for her son is that “the women jumped to her feet and ran upstairs to the boy’s bedroom. She hugs her son “consoling him”. This shows how strong their relationship is. Billy is under a lot of pressure from his parents.

He was the one that his parents were looking after but now they are relying on his wages for them to survive. He is forced to choose who to give his money to, his mother or his father. If Billy was to give the money to his father it would be because he was scared of what would happen if he didn’t. We can assume this because we are told that Billy is “afraid of his father”. However Billy gives the money to his mother because he knows that he can trust her, even understanding what his father would likely do.

About "The Breadwinner" by Leslie Halward. (2016, Nov 10). Retrieved from https://studymoose.com/about-the-breadwinner-by-leslie-halward-essay 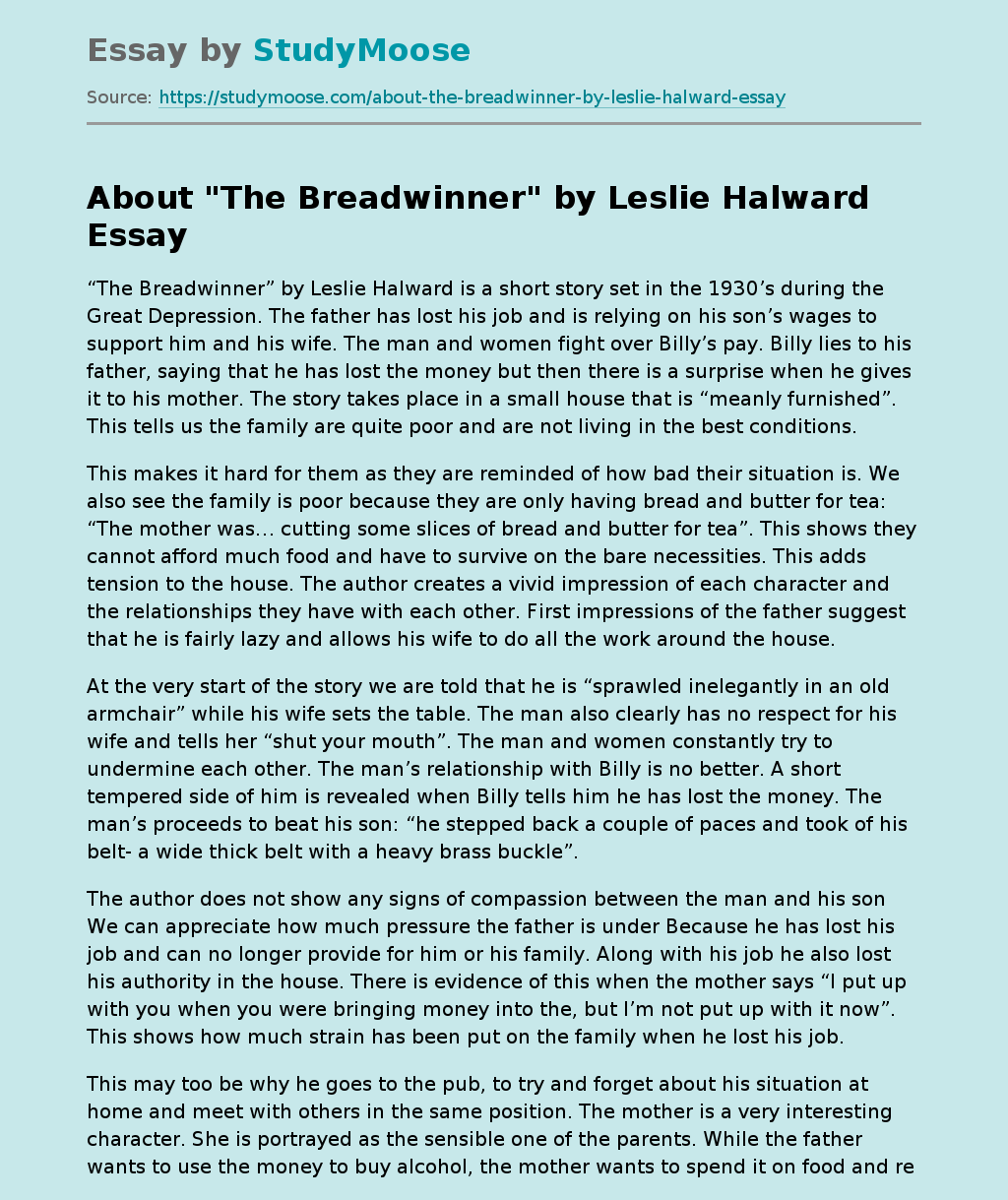