A crucible of American Identity

From the founding of the United States to its keeping, wars have been fought- some lost some won- but by re-examining history, some decisions about going to war or capitulation have been learned and questions asked. Could they have been avoided and other strategies sought? Analyzing the relationship between the United States and the North African Barbary States in the 1800s conveys the author’s main purpose in this article by showing how a young nation at that period in time was taken advantage of by the Barbary States and made to pay frequent ridiculous tributes to sultans, yet its citizens imprisoned, killed or enslaved.

Don't use plagiarized sources. Get your custom essay on
“ A crucible of American Identity ”
Get custom paper
NEW! smart matching with writer

The eventual consequence was the pursuit of reciprocity: respect and honesty in trades. The author takes us on a journey from the beginning to the crest and the nadir through the experiences of some exemplary individuals of how the United States eventually got what it wanted. The story of William Bainbridge, famously described here as having pervasive bad luck, sets the tone of the fate which befell the Americans frequently but specifically on the George Washington.

The anger that must have seethed from their thoughts from the humiliation they experienced when their course was redirected to Istanbul under severe threats could not be tempered as Bainbridge himself swore that he would never take tribute to Algiers “unless authorized to deliver it from the mouth of our canon”. This told well of the humiliation as he once more quipped” such mortifying degradations….makes me ponder on the words, independent United States”.

This meant that the lofty image the United States had of itself or the image it portrayed to some other nations as a powerful nation that could defeat the British Empire in battle was false. How do you explain defeating a giant yet yielding to an ant? Nevertheless, this was a catalyst for a nation to create and reaffirm its identity, to live up to the image it portrayed, bring the abuse by the Barbary States to a stop and restore some pride. Dealing with the Barbary States from the home turf proved more difficult as the then President of the United States, Thomas Jefferson was known for his vacillations.

He promised to attack the Barbary States and not yield to their vain promises or their incessant demands for more tributes but went around and lessened the number of navy ships that could wage war on those states. Something I call a backwards progress. It later dawned on the President that inaction was not the best solution so he bypassed the congress and instructed the navy to act on the previous treaties they already had with the North African states. By bypassing the congress to authorize a military action on those states meant that the succeeding presidents of the United States could also do this during their tenure. It is what we popularly call Executive Action. Several individuals ran up the list of bravery and cowardice. A notable example of the cowards was Richard Morris whose pitiful attempt at charming the pasha by capitulating with a $5000 “inducement” had him scampering back to the safety of his ship for fear of being taken hostage when the pasha said his tribute was laughable at best. A further smear on the power of the United States as this signaled that the Barbary States had an upper hand in trades and negotiations.

Here come the noteworthy braves: i) Edward Preble, whose audacious approach to the emperor of Morocco resulted in the unconditional renewal of the 1786 treaty between the two nations. ii) Stephen Decatur, whose conquest with Edward Preble in the burning of the grounded Philadelphia rang across Europe as a valorous deed of the “age”, an act of immortal glory. Lastly was Eaton, whose determination to dethrone Yusuf and enthrone Hamid though outnumbered was brought to an abrupt end when an American naval ship the USS Constellation sailed up and informed him that the President had settled issues with Yusuf.

His efforts were gallant because Yusuf thought the Americans were gaining grounds on all flanks and that compelled him to yield to negotiations. Had Eaton not been determined, the pasha may not have yielded as he had often laughed off the advances of the Americans in the past. In summary, whatever the stars and stripes may come to symbolize nowadays to an individual, the price of war is always greater than the price of reasonable negotiation but the price of identity may be the sum of both. The United states time and over has come to establish that identity across the world by declaring war or negotiating with nations whose actions have direct impact on its domestic affairs.

Some OPEC countries can easily determine the price of barrels of crude oil on a whim but also readily come to negotiations with the United States if certain conditions are met. These conditions could be likened to the tributes of the 1800s. But on another hand, those countries whose stubbornness to conform with pacts and whose foreign affairs affect the domestic affairs here could easily find themselves entrenched in a war with the United States. Most notable examples are Iraq, Syria and Libya; the war in Iraq was shrouded under the cloud of Weapons of Mass Destruction but it actually was for the control of Oil and Syria likewise because the ISIS has control over critical oil installations and refineries. The Libyan war was based on support. To support the rebels to dethrone Ghaddafi who sat on an abundance of oil wells and was trying to galvanize the Muslim and all African countries to ignore dealings with the United States, proposing one currency and a United States of Africa –an identity- had he succeeded, the authority of the United States would be threatened.

A crucible of American Identity. (2016, May 24). Retrieved from https://studymoose.com/a-crucible-of-american-identity-essay 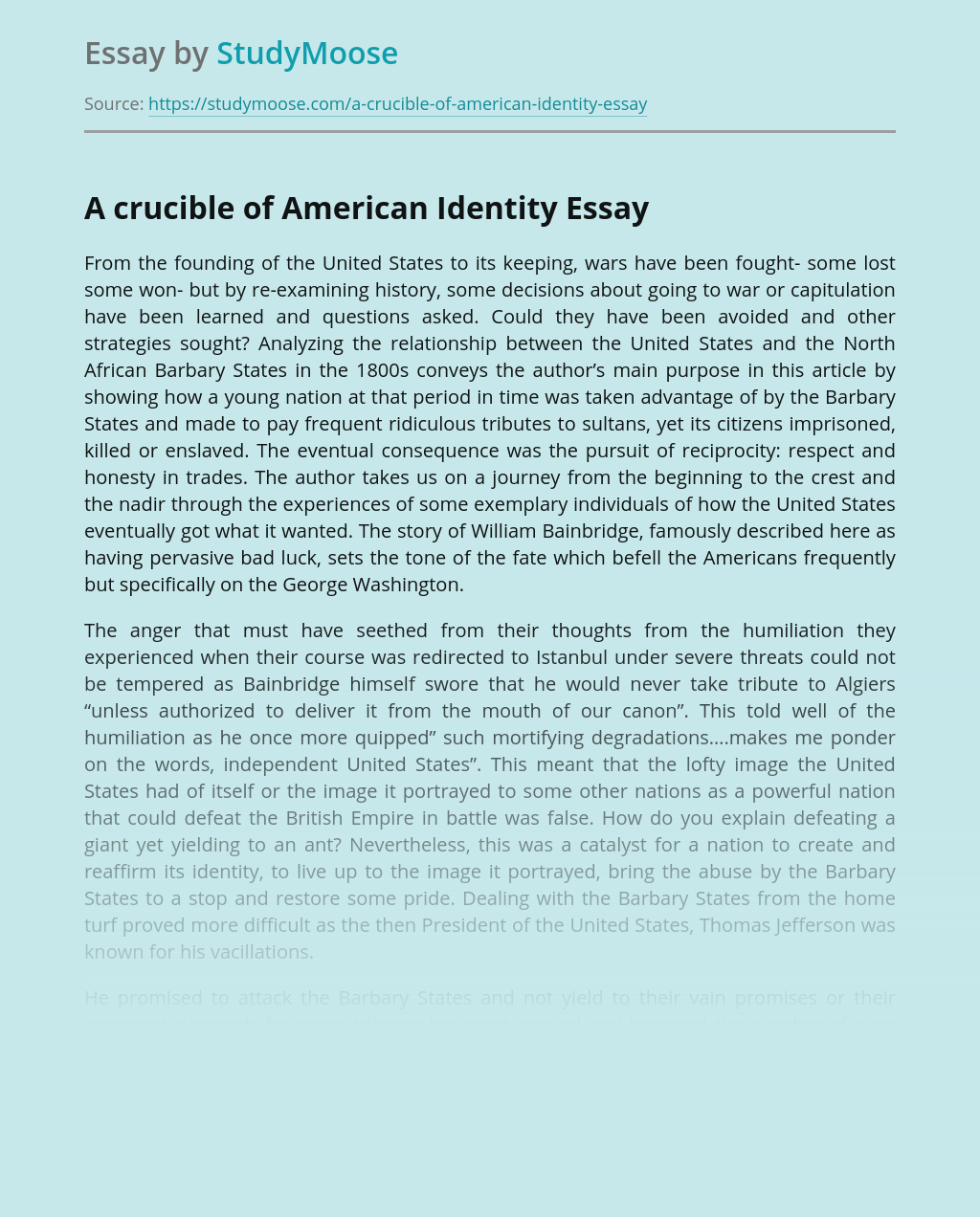