The Use of Animal Imagery in The Wars

Timothy Findley’s The Wars describes the history of Robert Ross, a Second Lieutenant in the Canadian Army, during World War 1. The story of Robert Ross is a candid recollection of a young man coming of age in the midst of horror and confusion associated with the “war to end all wars”. Presented in the form of an archivist trying to piece together the past from pictures and letters, the narrative account is full of rich imagery and deep meaning. The abundant animal imagery in the novel is used to parallel and reveal the character of Robert Ross, foreshadow the situations he finds himself in, and symbolize hope amidst war.

Don't use plagiarized sources. Get your custom essay on
“ The Use of Animal Imagery in The Wars ”
Get custom paper
NEW! smart matching with writer

Robert’s connections with the animals such as coyotes, horses and rabbits illustrate his character. In the process of becoming a soldier, Robert’s run with the coyote is significant in his understanding of himself. As one critic stated: “The Coyote in Indian legend is a hunter…that admits his mistakes and learns from experience, making him a wise guide for the soul” (Quaid 406).

Therefore For Robert to be a soldier, it is important for him to see the point of view of a hunter. Robert follows the coyote and watches as it passes two gophers and does not even “pause to scuffle the burrows or even sniff at them. It just [goes] right on trotting-forward towards its goal” (26). He learns from the coyote that a hunter, like soldier, must choose its targets carefully and must always stay focused on the goal.

This has a significant impact on Robert because he “wanted a model …someone to teach him” (24). So, “…in a world where human insanity was the norm” (Quaid 404) Findley characterizes Robert with the animal world. This is also illustrated throughout the novel in his relationship with horses.

Physically, Robert has many characteristic connotations associated with horses, such as being strong, athletic, and handsome. During the ship ride, the horses become a metaphor for soldiers like Robert since they all share sub-human treatment. “Privacy is unheard of…. [there is] tremendous heat…everyone suffers from headaches” (58) and some people, like Harris, become sick. The animal hold, which is “… one of horror…alive with flies”(60), parallels that of the soldiers, forming a connection between the two. This connection can be seen later in the novel when the soldiers like Robert are forced to become “very much like animals” (Quenneville1). That is, Robert has to disregard civility and humanity in order do whatever it takes to survive in the trenches. Furthermore, the soldiers are sent into war like animals about to be slaughtered. Like the horses in the war, the men are sent to meaningless deaths, sometimes reaching in the tens of thousands, “and not even an inch of ground [is] won” (120).

Robert’s close union with animals is acknowledged by Rodwell when he draws Robert in his sketchbook as “the only human form”(155) among sketches of animals. When Robert compares the drawings of the animals to the one which is his own, he notices that “the shading [is] not quite human” and that “he [is] one with the others” (155). This implies that Robert is forced by the war to become like an animal. Concordantly, he is not free, since he would be shot for running away. He is at the power of others in a chaotic war. Most importantly his life has no value since he could become one of the faceless corpses in the mud at anytime.

The animal imagery not only parallels Robert’s character, it also allows the reader to see his compassionate side. Towards the end of the novel, Robert realizes the insanity of the war when he was not allowed to retreat with his horses because they “would never live it down” (201) In order to save the horses, he disobeys direct orders, and jeopardizes his life. Instead of being rewarded for his bravery; he is shot at and called a traitor. Before he is horribly burned, Robert yells “We shall not be taken” (212). This final expression of oneness with the horses illustrates Robert’s compassion towards animals that have lives so similar to his own. His compassion is also evident when he tries to save Rowena’s rabbits from being killed.

The rabbits reminded him of Rowena because she shares the same characteristics as her rabbits such as fragility and innocence. Therefore he risks “a blow on [his] head…to help the helpless [animals]” (Quenneville 1). He even helps a rat, an animal associated with disease and death, escape a muddy grave. His conduct greatly contrasts that of the soldiers who kill and torture cats and vermin. This only further exemplifies his compassion for the lives of even of the smallest of creatures.

Among other animal imagery, birds appear frequently throughout the story in times of crisis. The birds often foreshadow dangers that lie ahead. For instance, when Robert’s team takes a wrong turn, “the fog is full of noises”(80) of birds. Then the birds fly out of the ditch and disappear. Robert and Poole know that “[there] must be something terribly wrong…but neither one knew how to put it into words. The birds, being gone, had taken some mysterious presence with them. There was an awful sense of void–as if the world had been emptied” (81). The birds return and when Robert nears the collapsing dike and “one of the birds [flies] up cut[s] across Robert’s path” as if it is trying to prevent him from going any further. Robert does not heed the warning and almost dies in the sinking mud.

Another ominous bird appears when Robert and his men are close to enemy lines. The bird “[sings] over their heads” (136) causing Robert to look up to see the deadly gas creeping towards his crew. He is able to react quickly and save most of his men. Soon after, the same bird sings again: “one long note descending; three that [waver]” (142). Then Robert sees the German soldier whom Robert ends up killing when he thinks that the man is reaching for a gun. Robert realizes that the German was only reaching for his binoculars, even though there is a sniper rifle sitting right beside him. He wonders why the man did not kill them all, and then he hears the bird sing once again, its song wavering “on the brink of sadness. That was why (146). The bird sings sorrowfully for the horror and tragedy of war, along with the unnecessary loss of life.

This scene is also foreshadowed by Robert’s run with the coyote, where the coyote didn’t hunt all the badgers it saw. In Robert’s case, he is the prey and the sniper is the hunter who, like the coyote, didn’t kill unnecessarily. Impending danger is also shown by rabbits when Robert was on road with a convey set for St. Eloi. Right before a bomb exploded, Robert saw “a rabbit, beside the road,”(197) which then quickly disappeared. Towards the end of the novel, another threat is foreshadowed by another animal. Right before shells fall near Robert and Devlin, they are described as being “rolled [up] like hedgehogs” (201). This is similar to how Rodwell’s hedgehog is described before it gets killed by a gas attack.

The animal imagery is also used as a symbol of hope amidst devastation, and it portrays the will to survive in the worst of places. While Robert steps over the bodies of dead men, he sees a rat struggling in the wet earth. He sets it free, “thinking: here is something that is still alive. And the word alive [is] amazing” (127). For Robert, the rat is a miraculous sign of life amidst death. Another animal that stands out from the surrounding chaos is the cat cleaning its paws during a raid. “The white cat on the wreckage of the field hospital is an image of nature’s power to survive, a power that is seemingly brought to the reader’s attention” (Quail 405).

The significance of this imagery to some soldiers is made painfully clear when Rodwell commits suicide when he is “forced to watch the killing of a cat” (150). Although birds act as omens, one critic also believes: “Birds… repeatedly offer the soldiers a reassuring link with harmony and stability” (Quail 405). Findley demonstrates with this imagery that hope is present, and even needed, in the worst of situations.

Throughout the novel, Findley finds many uses for the animal imagery. For instance it acts as a beacon of hope, a device for foreshadowing dangers, and a means of revealing Robert’s compassion. The diversified use of animal imagery is important in a war novel because the insanity of war only results in the dehumanization of humans into animals. It is therefore fitting that in a place where man and beast are one, “nature will form both the moral and the visionary centre of the novel” (Quaid 408).

The Use of Animal Imagery in The Wars. (2016, Jun 28). Retrieved from https://studymoose.com/the-use-of-animal-imagery-in-the-wars-essay 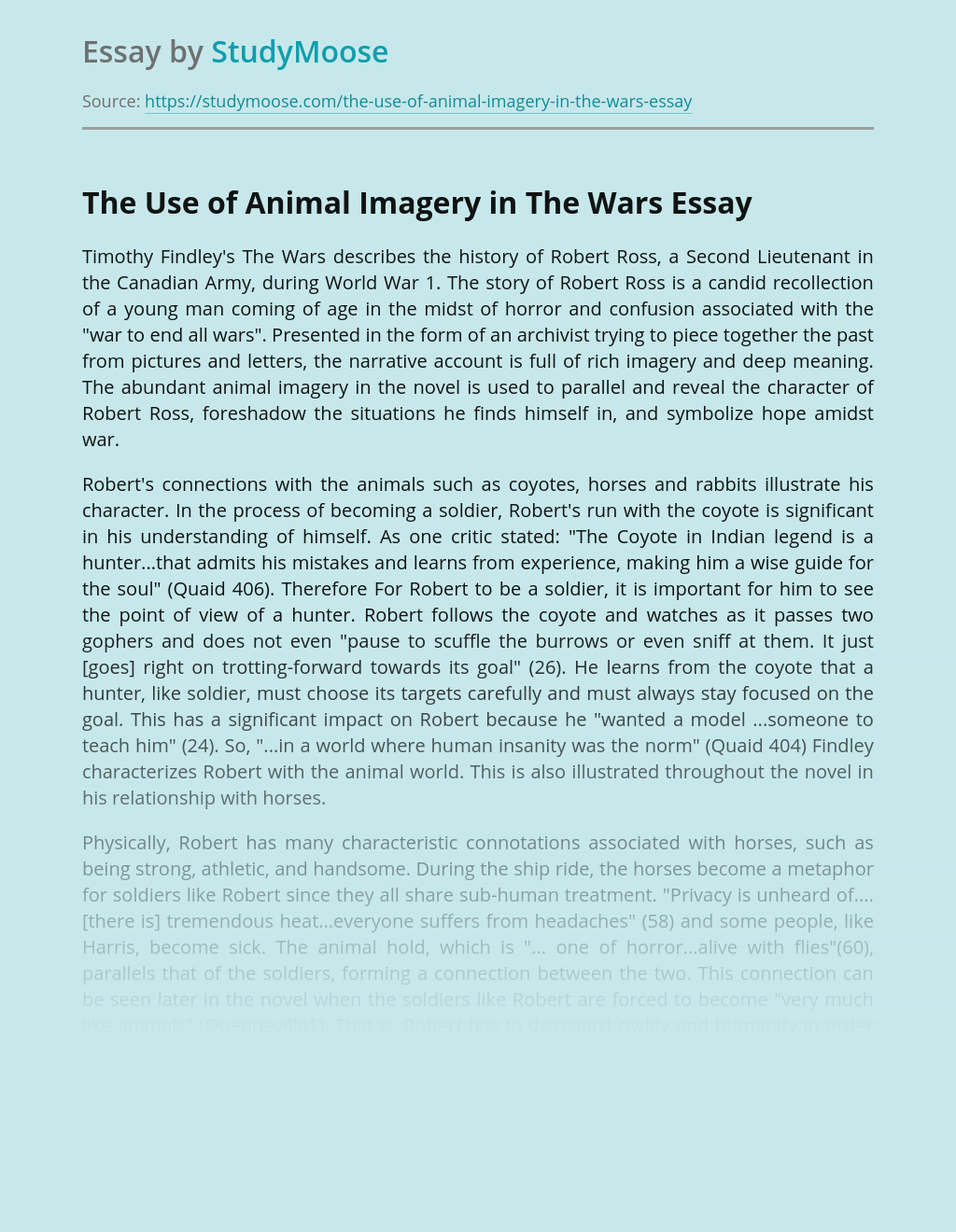