The theme of “Animal Farm” by George Orwell is there are dangers of a naive working class if the abuse of language as instrumental to the abuse of power is applied. For example, on page 31 “Comrades! You do not imagine, I hope, that we pigs are doing this in selfishness and privilege? Milk and apples contain substances absolutely necessary to the well-being of a pig. We pigs are brain workers; the organization of the farm totally depends on us” Squealer cried.

This is manipulation of language to make the Animals believe that the pigs should be given the best of the food production. According to Squealer mental work is more exhausting than physical work. This shows manipulation, because Orwell refers back to the Russian Revolution of 1917 when Stalin took over Russia and he didn’t follow Marx’s ideas, as Napoleon didn’t follow the idea of Animalism. Joseph Stalin killed anything in his path and modified the laws to his benefit, as Napoleon did throughout the book.

Also, on page 100 the hens are requested to give six hundred eggs a week, and the other animals wore asked to build a windmill and a schoolroom while their food rations are being reduced. Everything in total is mostly for the pigs benefit, as in the schoolroom for the teachings of the young pigs, and the money for the sale of the eggs is making. There are dangers of having a naive working class because, people can be manipulated by the abuse of propaganda.

Orwell creates an indignant tone throughout the classic Animal Farm. The indignant tone is shown through out the book, because Orwell feels anger about how unfair the Russian Revolution was and, how naive society can be when people don’t work for rights. In Chapter V, “At this there was a terrible baying sound outside, and nine enormous dogs wearing brass-studded collars came bounding into the barn. They dashed straight for Snowball, who only sprang from his place just in time to escape their snapping jaws.

” According to SparkNotes, Editors, “These words from Chapter V describe Napoleon’s violent expulsion of Snowball from Animal Farm, which parallels the falling-out between Joseph Stalin and Leon Trotsky. As Stalin did, Napoleon prefers to work behind the scenes to build his power by secrecy and deception, while Snowball, as Trotsky did, devote himself to winning popular support through his ideas and his eloquence. ” The tone Orwell creates all refers back to the Russian Revolution, Napoleon decided to create his own power ignoring what the real idea of Animalism that Old Major created.

Napoleon ignores Animalism, because creates a more of a totalitarian government. He makes himself President when in reality he is a dictator. Orwell shows that he is indignant about Joseph Stalin and how he used to kill people who got in a way of his power, as Napoleon who is really ambitious and kills opponents to his ideas. Imagery Through out the book Animal Farm, George Orwell uses examples of imagery to make a better vivid image to show the readers how unfair the Russian Revolution was. Old Major’s dream is an example of imagery.

Old Major’s dream is about equality. Old Major tells the other animals that “Man is the only creature that consumes without producing,” and he encourages them to “work night and day, body and soul, for the over-throw of the human race. ” In short, he explains that men have been taking advantage of them for years, and that it’s time for the tyranny of man to end but, what he is really talking about is rebellion. Major’s dream is a simplest version of Communist Manifesto; the basic idea of the Manifesto was capitalism was seriously unfair.

The workers never saw the products of their labor because the capitalists, the people who owned the means of production claimed the profit for themselves. As in the book, Mr. Jones never showed the animals any affection or appreciation thus the animals for their work. The author used imagery in this occasion because he wanted to portray a negative view of how he attended his farm, and to give him an instant poor reputation because of his usage of alcoholism. Equally imagery was utilized by Orwell in pages 107-108 when a main working class character, Boxer, was being taken away by the Horse Slaughterer.

Evidently, the usage of imagery helped to see how the animals responded towards the last seeing of one of their own, and how violent Boxer responded. In brief, all the vivid images Orwell cause was for the caused of the comprehension of how the ones being use by the ones with power are being affected. Imagery in Animal Farm helps the reader have a better idea and comprehension of what allegorically message Orwell is trying to transmit through the animals. Literary Devices Dramatic Irony is used throughout the book, dramatic irony was shown when

Squealer and Napoleon persuasive the animals that Boxer died in peace. The death of Boxer shows Dramatic Irony because the reader knows that Boxer didn’t actually die in peace he actually was sent to a Slaughter house to get killed. Squealer tells the animals that the van that came to pick up Boxer was from hasn’t been repainted since the past owners. This is dramatic irony because the van clearly says, “‘Alfred Simmonds, Horse Slaughterer and Glue Boiler, Willingdon. Dealer in Hides and Bone-Meal. Kennels Supplied.

In page 13 and 30 there was a bucket of milk left for the animals to use it in their mash, but once they left one animal stayed behind for some minutes, Napoleon, after the animals came back the milk had disappeared. Dramatic irony was seen and use here because the reader would comprehend how Napoleon actually took the milk for his food and some other pigs too, but wasn’t planning to share it with the rest of the animals in the farm, as it has been proven in page 30 when the animals found out that he actually took the milk.

In a brief, page 13 the reader was actually the only one able to understand that Napoleon took the milk while the rest of the animals didn’t have a clue until page 30. Orwell wants the audience to know how the animals are been fooled and brain washed by Sealer and Napoleon and the animals are too naive to understand and see what really is happening. Genre Analysis Animal Far m is an example of an allegory classic; this novel teaches the reader how unfair was the Russian Revolution and what a big impact it had in the 1917-1921.

Napoleon’s Initiative represents Stalin’s five year plans, In Animal Farm, Napoleon has the animals working harder than ever. Even the neighboring humans “had developed a certain respect for the efficiency with which the animals were managing their own affairs” But the animals are still starving. And just like Stalin, Napoleon uses tricks to “conceal this fact from the outside world” Napoleon sends the sheep out to talk about increased rations and has empty food bins filled with sand, lots of fiber, but unfortunately not too filling.

Orwell is trying to teach the reader that society can be really dumb and easy to be manipulated, and people obey those who say they have power because society is too naive to take initiative of their own. The Hen’s rebellion represents Stalin’s Great Purge, The hens refuse to give up their eggs; Napoleon starves them; several of the hens die; the rest simply give up. Then, the pigs confess that they were working with Snowball and Mr. Frederick, and a moment later the dogs “tore their throats out” And then it happens again, with hens from the rebellion, a goose, and several sheep.

Napoleon contradicts himself based on the first seven commandments, “No animal shall kill another animal”. Napoleon changes this commandment to “No animal shall be killed without cause. ” Orwell wants the reader to understand that sometimes leaders change laws to their benefit and citizens don’t claim anything against them, because they are too scare to speak u. Animal Farm is a great allegoric novel because it teaches the reader how cruel the world can be when there is not actual equality and society gets intimated by people with power. 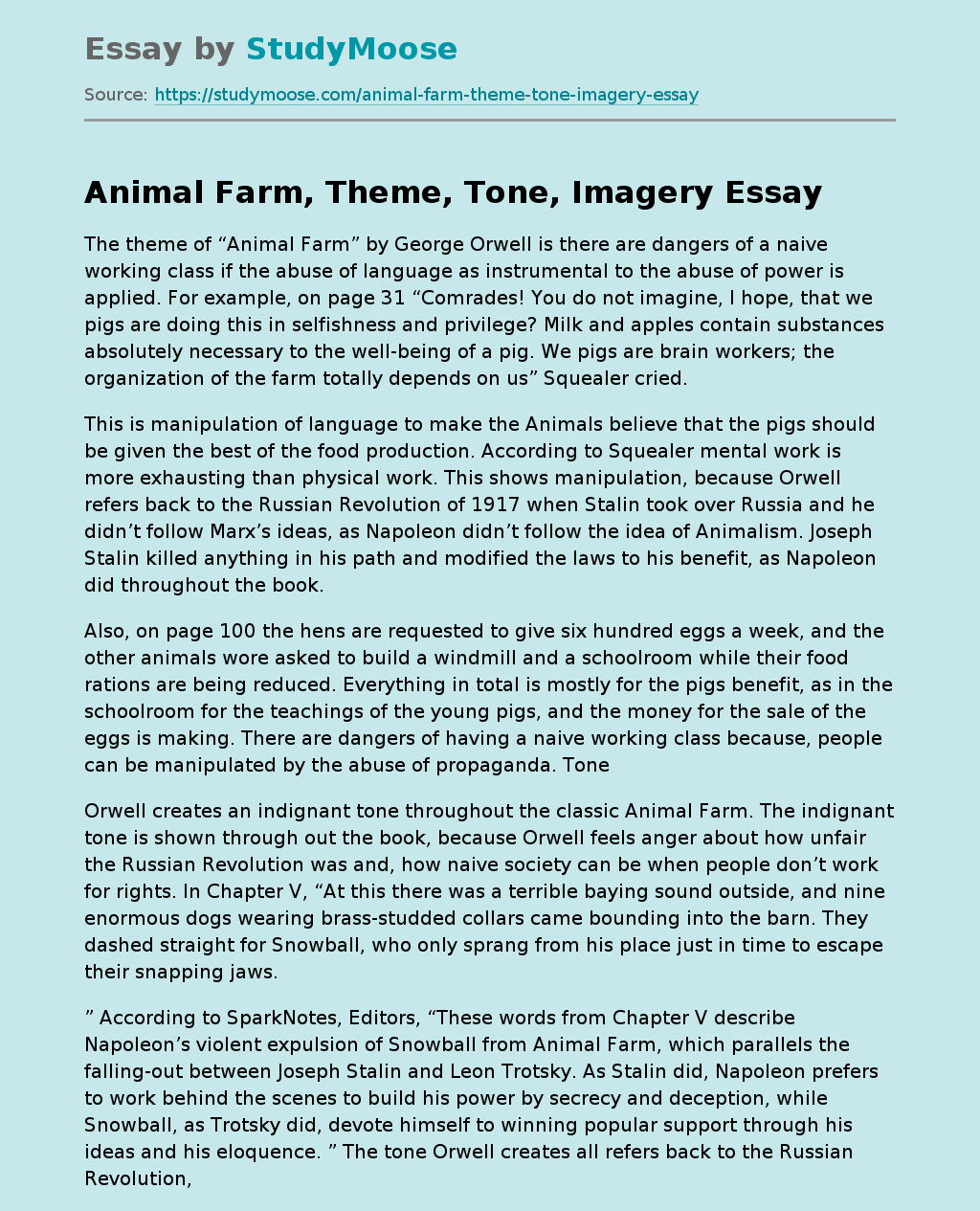