Use of Imagery in Oliver Parker's Othello

The symbolism with the chess pieces is very relevant to the issues of the play. It is used to symbolize Iago’s control over the main characters. Othello, Desdemona and Cassio and represented by a black king, white queen and white knight respectively. When Iago has finished his soliloquy, he drops the pieces into water. This is done to symbolize the inevitable demise of all 3 characters. The first time we see the chess pieces they are alone on the middle of chessboard with Iago looking over them.

Don't use plagiarized sources. Get your custom essay on
“ Use of Imagery in Oliver Parker’s Othello ”
Get custom paper
NEW! smart matching with writer

This symbolizes Iago’s control over the situation and how he is the instigator of the tragedy. This is the major event of symbolism in the movie, however, there are some other examples:

The scene with Iago and Othello on the beach is another subtler example of symbolism. The camera shot shows Iago in the lead being followed by Othello. This is symbolic of the way that Iago is leading Othello along, only letting him know so much that he desires more so he hangs on every word Iago says.

Camera shots are also used effectively in Othello’s “return to Venice” scene, where he is riding on his horse, fully clad in his battle armor. This is when Othello is at his most noble, his most heroic. The camera shot makes him appear higher than everybody else; giving the impression that he is “above” them. From this scene on, Othello falls further and further into Iago’s trap.

It is most prevalent in the scene where Othello is imagining Desdemona and Cassio making love. The scene shows Othello looking helpless and then it quickly flashes to Desdemona and Cassio and then back to Othello. The speed at which the pictures change increases to such a point that it symbolizes the madness Othello is slipping into. At the end, the camera focuses on Desdemona and Cassio as they look into the camera and laugh, as if mocking Othello. Othello falls into an epileptic fit soon after. Before Othello begins having his visions, Iago is once again whispering into his ear. Whenever Iago is lying to Othello, he whispers in his ear. This symbolizes Iago as a devil-like being.

Colour and lighting imagery also symbolize the issues of the play. Before Othello begins to go mad, he generally wears black clothing. When he is about to kill Desdemona, he is wearing a white cape. This is imagery symbolizes a “death shroud.” Lighting is also used in the scene where Othello kills Desdemona. When Othello is walking down the hallway to Desdemona’s bedroom, he is standing in the shadows, blowing out the candles along the way. This symbolizes his transition from: light to darkness, good to evil or sanity to insanity.

Use of Imagery in Oliver Parker's Othello. (2016, Jul 14). Retrieved from https://studymoose.com/use-of-imagery-in-oliver-parkers-othello-essay 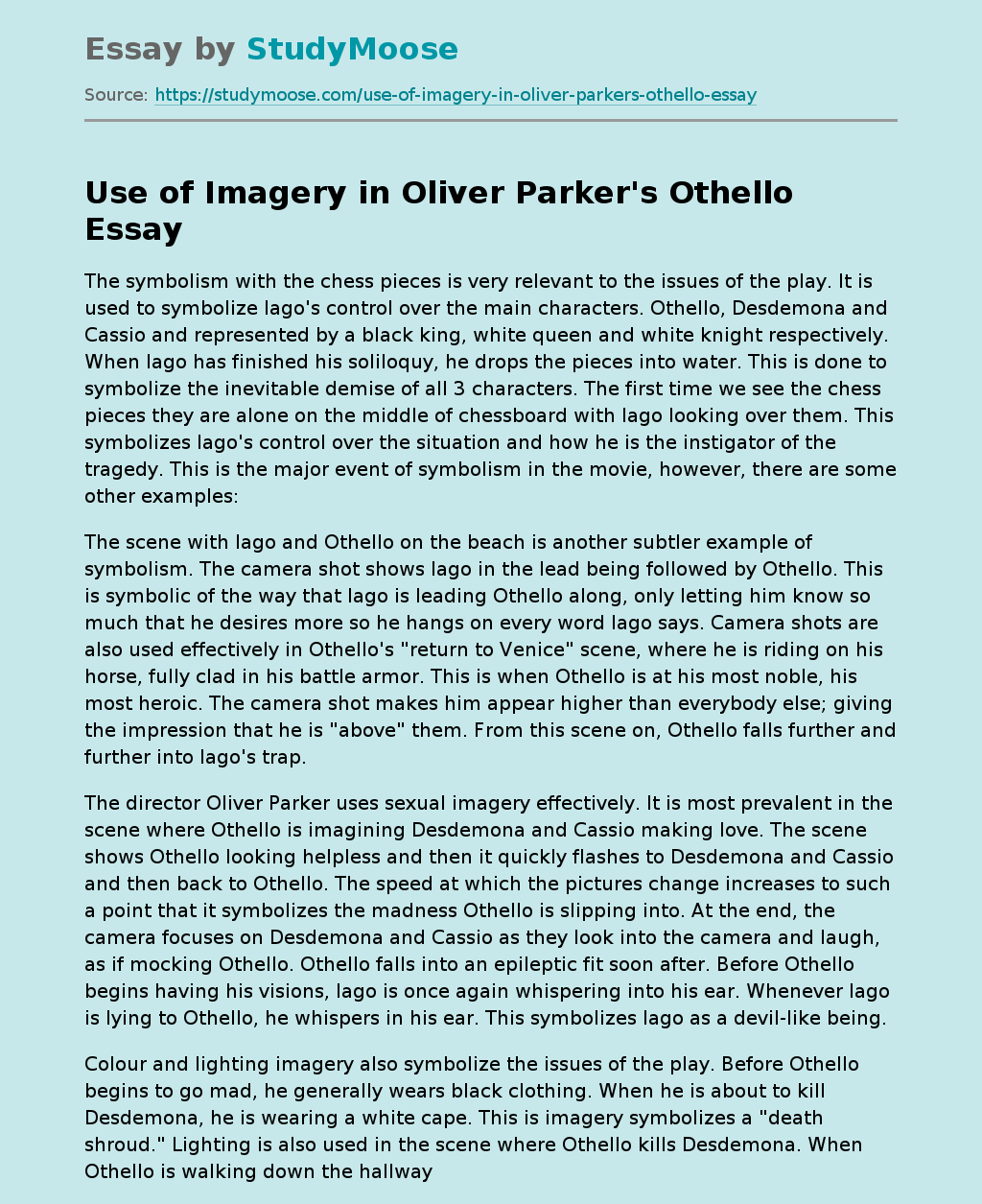