As the final chapter of Part Two comes to an end, Pi breaks into tears, crying the following words: “Richard Parker, a companion of my torment, awful, fierce thing that kept me alive, moved forward and disappeared forever from my life.” In the world today where civilization exists, the idea of an innocent sixteen-year-old boy surviving his ordeal with a feral Bengal tiger lies beyond our concept of reality. However, it cannot be denied that the relation between Bengal tiger and Pi is depicted with great amount of detail that makes it consistent and plausible, due to the author’s awareness that the intricate relationship will serve as an important role throughout the story in literary aspects.

Don't use plagiarized sources. Get your custom essay on
“ “Life of Pi” Characters ”
Get custom paper
NEW! smart matching with writer

In the novel Life of Pi written by Canadian author Yann Martel, a relationship develops between a Bengal tiger and Pi, who are stranded on a lifeboat after a horrific shipwreck Richard Parker and Pi seem to be full of opposites as the ordeal at sea begins.

Nevertheless, there are specific intentions of the author in placing these two living beings on the lifeboat which become apparent as the story progresses. The developments in the relationship are significant to the novel as a whole, as they effectively convey the author’s message and themes, and contain symbolism that has great importance.

The gradual development in the relationship between Richard Parker and Pi implies the most noteworthy themes of the novel. In the beginning, when Pi realizes himself and the Bengal tiger are stranded in the ocean, he feels enormous fear towards Richard Parker.

However, ironically, when Pi admits his death is inevitable, he stops worrying about the future; he can instead be soothed by knowing what will happen, regardless of how horrible the fate is. To his surprise, Pi finds out the tiger’s willingness to negotiate by the unexpected snort of prusten, which is a tiger’s way of stating that he has no malicious intentions. Consequently, Pi is distracted from his horrible loss of family, by training the tiger. “This was the way to tame him!” an exhilarated Pi exclaims as he finds a possible way of cohabiting safely with the tiger. Thus, their physical distance lessens, and this movement toward one another becomes notable. They share an interdependent relationship, which is shown through examples such as Pi catching food for both himself and Richard Parker, and the tiger protecting Pi from the attack of the French man.

This cooperation in the most primal of animals indicates the close similarities in the behavior of man and animal, under an adverse situation where civilization does not exist. It is here that the author implies what a relationship between man and beast should be. Although Richard Parker is undeniably seen as a danger, Pi’s experience provides a sense of connection with the animal world; Pi has a sense of respect and love for Richard Parker as well as many other creatures he encounters.

From another degree of interpretation, Richard Parker and Pi–characters who possess two completely different personalities–getting along well may bring the theme of both human’s and animal’s will to survive into the novel. Moreover, it is noteworthy that the tiger bears a man’s full name, while Pi is reminiscent of the word Pisces. Martel has built an apparent zoomorphic ambiguity into their names, pointing out the gray between the black and white, which means that Life of Pi refuses a simplistic attitude regarding human and animal relations. As the author suggests, animals are not absolutely lovable or monstrous creatures, or dangerous beasts, but they are closely related to humanity, and the same applies to Richard Parker.

In this novel, the relationship between the two characters symbolizes Pi’s animalistic instinct, and therefore holds significance. To the narrator, Richard Parker is not merely his simple companion and a wild animal, but at a deeper level of analysis, it is a mirror of Pi, himself. On the lifeboat Pi shows two different sides of himself. He becomes as savage as Richard Parker after he abandons his lifelong vegetarian personality and performs actions to sustain himself that would have been inconceivable in his former life as a religious teenager. As time progresses, he is unafraid of killing the living creatures even in brutish ways.

He tears apart birds and greedily stuffs them into his mouth, similar to the behavior of Richard Parker. Furthermore, in the second story he told to the Japanese investigators in part three, Pi is portrayed as Richard Parker who takes revenge upon his mother’s murderer by killing him. From one point of view, Pi invents Parker as an allegorical figure of himself, because in this way, the story becomes more pleasant and acceptable to the readers. It is arguable that the brutality of his mother’s death and his own shocking act of revenge are too much for Pi to deal with, and he finds it easier to imagine a tiger as the killer, rather than himself in that role. Richard Parker therefore can be concluded as the primitive side of Pi.

The magical spell between Richard Parker and Pi eventually breaks once the two characters land on the shore of Mexico, and they no longer need to maintain their interdependent relationship for survival. Both animals part and adapt to their new environments. During their predicament, their animal and human aspects have been mingled the whole time; nevertheless, once they return to civilization, they move on to their own roles. Pi becomes part of a community again, and Richard Parker departs into the wild. Despite the fact that they both have made it through the most difficult of trials by being the lifeline for each other, Richard Parker leaves Pi unceremoniously and disappears into the jungle. The purpose of the author in making this choice is to voice the message that the force of nature in our lives is beyond human control. This relationship between the two reflects how humans and animals interact in the real world that lies in contrast to the world where rules do not exist.

The relationship between Pi and Richard undergoes a number of notable changes. To Pi, Richard Parker changes from a source of fear to a light of hope, a companion, the only living creature he puts his emotions into for 277 days. They display interdependent relations through the story. Most importantly, there are numerous significance aspects to their relationship that makes it an essential part of the novel and that deserves to be focused on, as the interactions between them in a number of ways imply the true central ideas that are meant to be the intention of Martel’s writing Life of Pi certainly is a survival literature of the modern times that holds significance in various aspects. 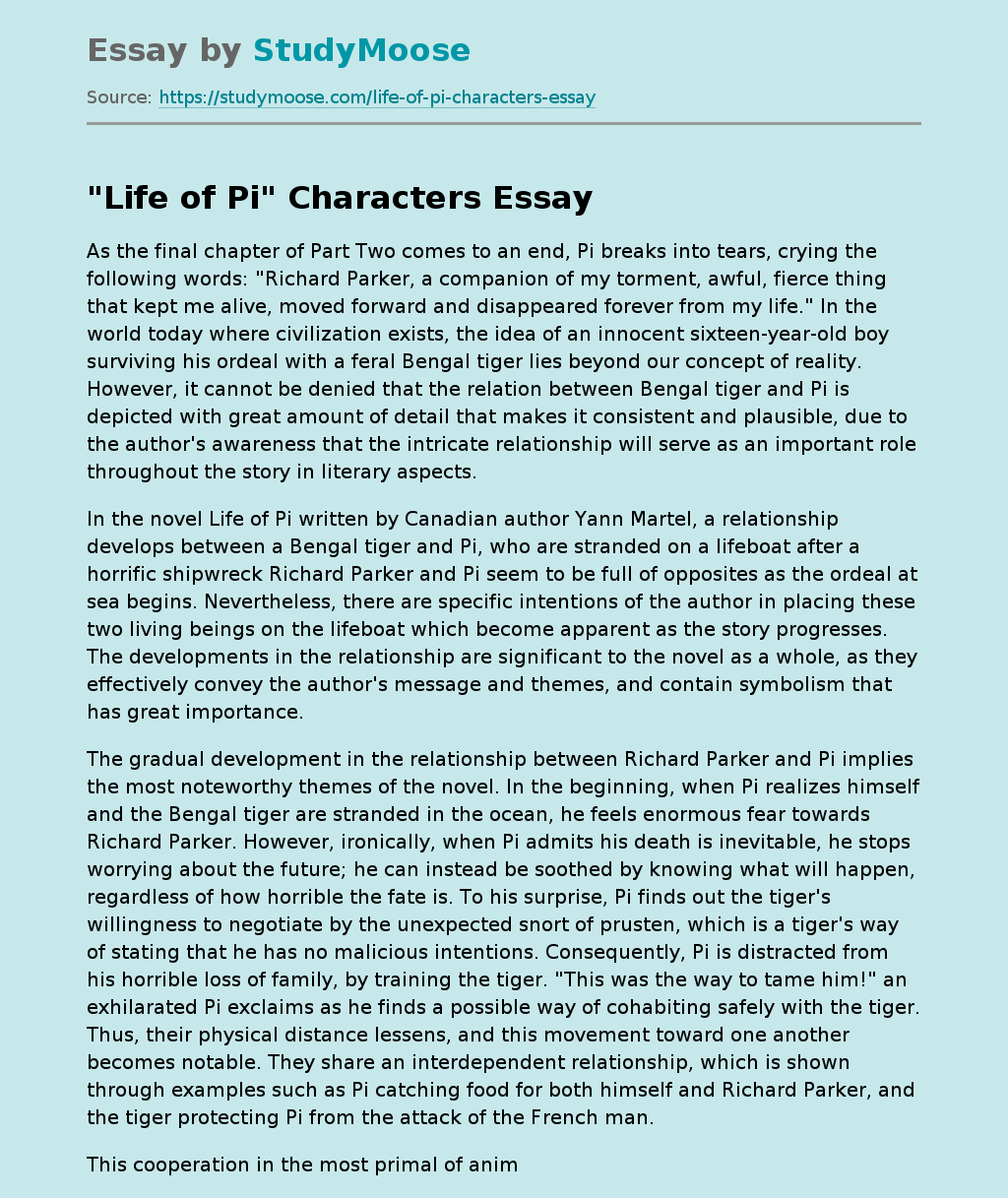