Comparison of King Richard III and Looking for Richard

Examinations of Shakespeare’s play ‘King Richard III’ and Pacino’s docu-drama ‘Looking for Richard’ reveals relationships between the texts and their respective audience. The fifteenth century and twentieth century contexts demonstrates the values of each text and enables understanding of how the film enriches the ideas presented in the play. ‘King Richard III’ portrays a hateful, corrupted Richard exploring divine justice and the notion of appearance versus reality in the context of the Elizabethan era. With a time difference of four centuries ‘Looking for Richard’ reflects the Pacino’s quest to understand a Shakespearean text through a personal examination of the same character.

Don't use plagiarized sources. Get your custom essay on
“ Comparison of King Richard III and Looking for Richard ”
Get custom paper
NEW! smart matching with writer

This docu-drama reflects the postmodern era’s absence of divine order and the change of conscience. Through the comparative study of these texts our understanding of different contexts and values are illuminated.

Shakespeare portrays Richard’s deception through his soliloquies and asides, revealing his multifaceted nature. Richard is shown to use intelligent word play, irony and stichomythia; he is ultimately cast as the Machiavellian character “determined to play a villain”.

Richard blames his appearance for his immoral acts “deformed, unfinished, sent before my time” and uses it to fulfill his hunger for power. Richard’s duplicity is emphasized when Clarence is sent to the tower. Any sympathy elicited from the audience is undermined by the thick irony in the dialogue. Richard appears to have no idea what is going on and innocently asks “Brother, good day. What means this armed guard/ That waits upon your grace?” Richard then tries to act like the loving brother “Brother farewell… this deep disgrace/ Touches me deeper than you can imagine”.

The Elizabethan audience is reassured that divine order will be restored and retribution will be reaped, Richard will be punished for his deceptive act.

‘Looking for Richard’ reflects the values of its society as Pacino attempts make Shakespeare accessible to a twentieth century audience. The film begins and ends with an intertextual extract from ‘The Tempest’ justifying the ambiguity of the twentieth century “…this insubstantial pageant…such stuff that dreams are made on…” reinforcing that life cannot provide us with stability in the search for the truth and morality as it is endless, unlike the Elizabethan era. Pacino’s portrayal of Richard shows his ability to deceive those who trust him “he’s in good shape. He can move around. He can maneuver”. He plays the villain, loving brother, resistant king and desperate lover with skill. The fluid editing between rehearsal scenes, the staged performances and the actors’ heated discussions reveal Richard’s ability to construct the truth. Richard’s punishment is not God’s divine retribution as he is haunted by his conscience. The final scene almost persuades the audience to feel sympathy in his death. Low angle shots reflect his loss of power. A contemporary audience understands that humans are multifaceted and do not condemn his deception as instantaneously as the Shakespearean audience.

‘King Richard III’ depicts Richard’s character through divine order and justice. Richard attempts to usurp authority as king being the catalyst of chaotic events. Richard removes anyone that acts as a barrier, including his own family “lies well steeled with weighty arguments”. His hunger for power results in his diabolic depiction “foul devil”, as he attempts to disturb divine order. The text was set in a theocentric society, God will seek retribution to anyone who goes against his will, demonstrated by Shakespeare when Margaret curses Richard for killing her husband and son “sin, death and hell have their marks set on him”. Richards disruption to moral order caused chaos, therefore divine order had to be restored. Richard had to pay the ultimate price for his sins “Hie thee to hell for shame… there thy kingdom is” as justification in the Elizabethan era. ‘Looking for Richard’ ignores Richards’ villainous chaos, instead targeting the audience who live in a world where importance is placed on the individual. This is evident when Pacino states “A person has an opinion. It’s only an opinion. It’s never a question of right or wrong.”

The dialogue demonstrates that theocratic elements are no longer universally accepted. The film juxtaposes twentieth century values with those of the Elizabethan people to show that people are guided only by their own morals. This is shown as Pacino chooses to focus the conversation of Clarence’s murderers on their own individual guilty consciences “Faith, certain dregs of conscience are here within me”. Pacino chooses to cut out the religious rhetoric to stress that Elizabethan values seem irrelevant to the contemporary audience. Rapid camera movements portray Richard as a tormented, psychologically unstable man. He becomes haunted by the ghost of his conscience and is punished by his madness rather than his death. ‘Looking for Richard’ proves there is no fear of retribution, only the impact of their immoral behaviour on their identity. In our contemporary context justice is displayed as of individuals own psychological destruction and guilt, rather than endorsed by God.

The analysis of “King Richard III” by Shakespeare and “Looking for Richard” by Al Pacino extends our understanding of the values and contexts of the texts and the attributes they share. Shakespeare’s Elizabethan audience valued religion and God’s restoration of rigid order as Pacino’s twentieth century audience have no decisive spiritual references and live in a world where independence is placed on the individual. The contextual comparison of the texts furthers our understanding of the values portrayed within two largely diverse time periods.

Comparison of King Richard III and Looking for Richard. (2016, Aug 06). Retrieved from https://studymoose.com/comparison-of-king-richard-iii-and-looking-for-richard-essay 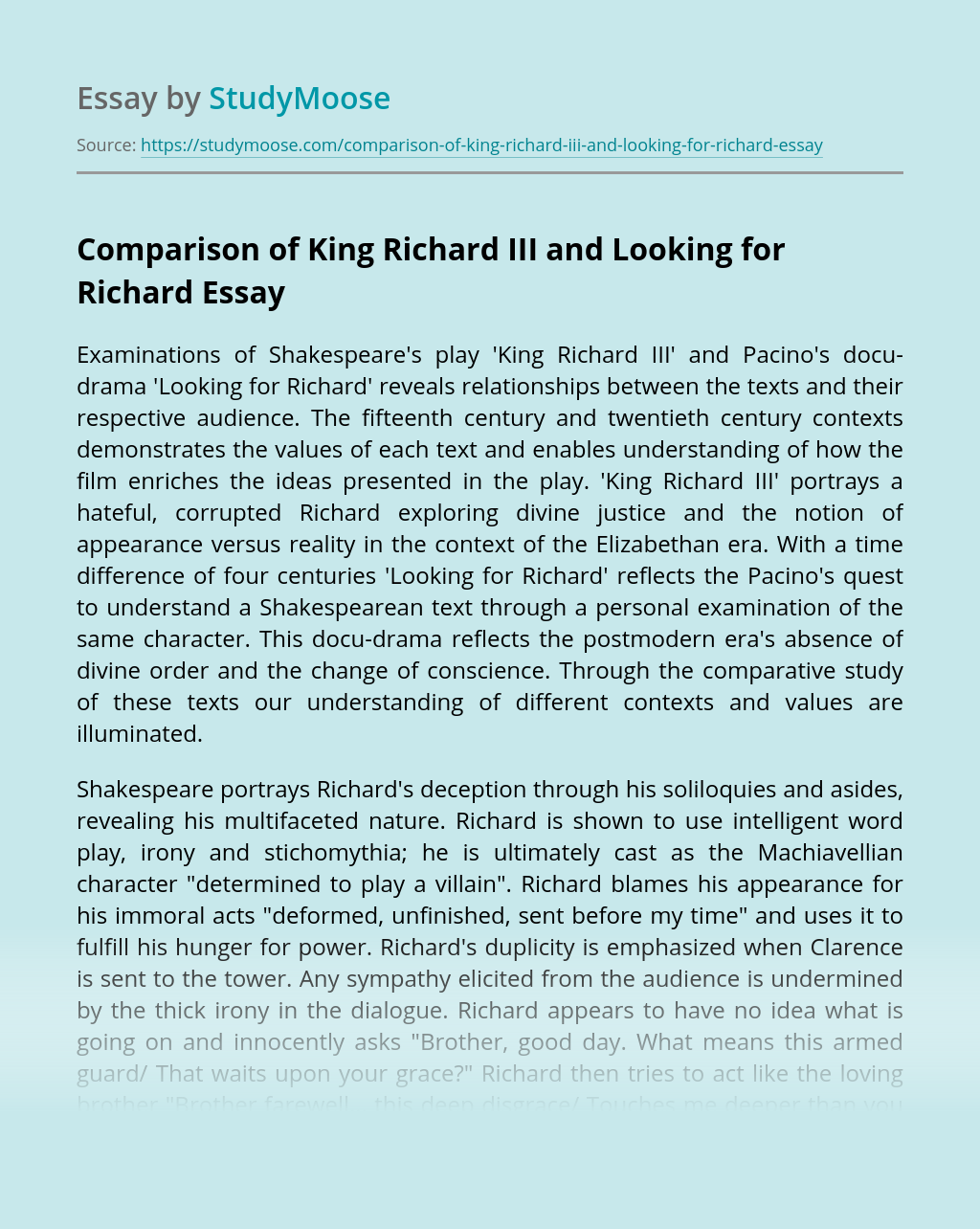