Connections of commonality and dissimilarity may be drawn between a multiplicity of texts through an appreciation of the values and attitudes with which they were composed. Accordingly, the values and attitudes of the individual being may be defined as an acute blend of externally induced, or contextual and internally triggered, or inherent factors. Cultural, historical, political, religious and social influences, dictated by the nature of one’s surroundings, imprint a variable pattern of values and attitudes upon the individual. Thus any deviation in any such factor may instigate an alteration of the contextual component of one’s perspective.

Turn in your highest-quality paper
Get a qualified writer to help you with
“ Richard Iii/Looking for Richard ”
Get high-quality paper
NEW! AI matching with writers

By contrast, the psychological fundamentals of humanity are sturdy and whilst they partake in the definition of the values and attitudes of the individual, they are unwavering.

Shakespeare’s historical play ‘Richard III’ and Pacino’s docudrama ‘Looking for Richard’ confirm such theory through an exploration of the contextual and inherent. A scrutiny of the contradictory forces of humanism and determinism and the function of women as demonstrated by both texts imparts an incongruity of context.

Difference is thus conveyed. Conversely, an acknowledgement of the strength of conscience common to both texts suggests an inherent influence. Thus it is through inspection of the prescribed texts that one may distinguish the degree to which the texts converge on inherent matters and diverge on contextual matters.

The contradictory forces of humanism and determinism form a connecting point of intrigue common to Shakespeare’s ‘Richard III’ and Pacino’s ‘Looking for Richard’. Influenced by shifting components of cultural and historical contexts, a difference may be perceived in the professed relationship between the two.

Inspired by a cultural renaissance, Shakespeare’s text is responsive of an existent tension between the highly structured and preset theory of determinism and an emerging intellectual interest in humanism. Reiterated by historically endorsed values such as the great chain of being and supported by institutions of power, determinism is favoured from the outset of the play. This derives from the play as a recount of historical events with a known outcome and a medium for propaganda in support of the monarchy, an avid determinist.

Nevertheless, the aforementioned tension is prevalent throughout and epitomised by the paradoxical pun ‘I am determined to prove a villain’. Uttered with a tone of poise and self-assuredness, the term ‘determined’ implies a conscious statement of purpose and a preordained villainy. Thus Richard is aligned with the stock character of the Vice, an instrument of predestination, and the innovative Machiavel, an advocator of humanism. Despite this, the ultimate decline of Richard is consequential of the reign of determinism. The directly antithetic correctio ‘I am a villain. Yet I lie, I am not’ yields an implicit self-doubt and acknowledgment of an inability to fulfil his humanist purpose.

Providentialism thus displays precedence over self-determination. This is in direct contrast to Pacino’s docudrama, composed for a secular modern American audience disengaged with traditional notions of determinism. A greatly diminished and altered portrayal of Margaret, the primary instrument of determinism in the play, is expressive of this. Pacino devalues her curses by reducing her to a ‘sort of ghost of the past’. A frenzied montage of informative discourse and the activity of the play complete with frantic cuts, climactic discordant music and the demeanour of Margaret – the juxtaposition of screams and whispers, turbulent facial expression and loose hair – complete a picture of insanity. This therefore undermines the force of determinism.

The function of women defined by the prescribed texts yields a dissimilar connection and this derives from altered historical and cultural contexts. Fostered by a society denoted by patriarchy and a traditional appreciation for determinism, the role of women within Shakespeare’s text is twofold; assistance in the representation of Richard as intrinsically evil and an endorsement of Richard as a predetermined villain fated to fall. This function, however, is not in balance; patriarchy weakens the former and a customary appreciation of determinism strengthens the latter. Therefore women as the mouthpiece of determinism may be perceived in a common lamentation colloquially regarded as the ‘scene of the wailing queens’. A pattern of anaphora and epistrophe initiated by Margaret – ‘I had an Edward, till a Richard killed him; I had a husband, till a Richard killed him’ – is evidence of this.

Repetition of clause acts as a persistent reminder of the severity of Richard’s crimes and strengthens invocations to follow. Conversely, Pacino fortifies the first of the aforementioned functions. A social, political and economic empowerment of women, coupled with growing secularism allows Pacino to exploit Richard’s misogynistic treatment of women as confirmation of his innately evil nature. This role is achieved through an effective filmic representation of Richard’s pursuit of Anne.

A pastiche of slowed film and non-diegetic music serves as effective; consecutive close-ups of Richard’s contorted face are juxtaposed with long shots of a small and vulnerable Anne and a crescendo of discordant operatic music coupled with a repetitive voice-over selecting appropriate quotes such as ‘I’ll have her but I will not keep her long’ serves to reduce Richard to lowly predator. Pacino furthermore selects a young actress and omits the stichomythic discourse between Richard and Anne prior to this in an effort to validate Anne’s willingness to marry in such circumstances.

An acknowledgement of the strength of conscience common to Shakespeare’s ‘Richard III’ and Pacino’s ‘Looking for Richard’ grants a connection. This therefore pertains to an ‘inherent’ constituent of the values and attitudes of the individual and is time enduring. A point of conflict, however, exists in its source; the Elizabethan context alleges a religious duty whilst the dominant modern American audience attributes a secular moral responsibility. Driven by a protestant pre-occupation with morality and conscience, Shakespeare’s text defines Richard as an amoral character; one without morals and thus without conscience.

Richard is therefore aligned with the antichrist; the gravity of his crimes elevated to an unprecedented high. Nevertheless, conscience as a supreme power is examined in the discourse between the first and second murderers of Clarence. The second murderer disregards his conscience to commit the crime despite extensive interior debate. Having executed Clarence expresses his regret; ‘How fain, like Pilate, would I wash my hands of this most grievous murder’. This biblical allusion, uttered with a tone of despair, serves to align the murderer with Pilate, the immoral and therefore, having conscience, inherently good, Clarence with Christ, the sacrificial Lamb of God and Richard with Judas, the amoral and innately evil.

Pacino’s representation of this scene suggests a common acknowledgement of the strength of conscience. Juxtaposed with the King’s attempt to unite the feuding families, the scene offers a direct contrast between the consequences of yielding to one’s conscience, implied by ample lighting and non-diegetic music of a major key, and ignoring one’s conscience, suggested by limited lighting and non-diegetic music of a minor key. Therefore, the action of ignoring one’s conscience is perceived to be perilous, with negative implications for the individual and society as a whole. This aligns with a timeless recognition of the strength of the human conscience common to both texts. 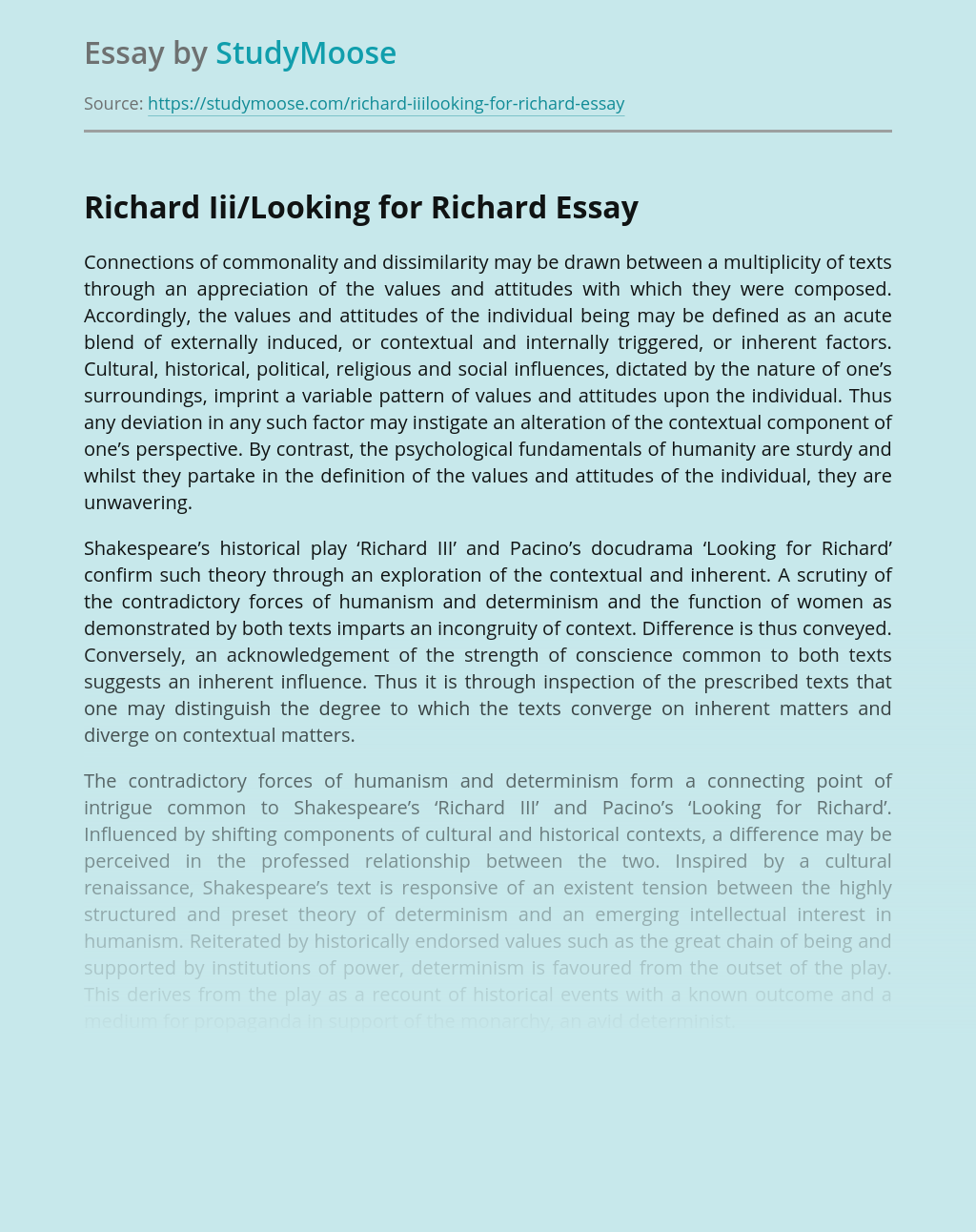 Turn in your highest-quality paper
Get a qualified writer to help you with
“ Richard Iii/Looking for Richard ”
Get high-quality paper
Helping students since 2015
Stay Safe, Stay Original