Roman Polanski's Presentation of the Witches in Act 1, Scene I and III of Macbeth

In the establishing shot of Roman Polanski’s film, he uses a still shot of a red sky on the horizon which eventually goes down. This may suggest evil and spilt blood. The weird and bizarre noises begin as a twisted staff appears on the screen. This may be used to suggest the witches and their twisted minds.

Shortly after, there are several close-ups of the witches, a severed forearm and a seagull. These in no way related to the play and are extra props.

Don't use plagiarized sources. Get your custom essay on
“ Roman Polanski’s Presentation of the Witches in Act 1, Scene I and III of Macbeth ”
Get custom paper
NEW! smart matching with writer

Polanski may use these close-ups as a way of showing the viewers what may be needed for the charm; the arm could be the ingredient, the seagull- an evil spirit, (such as the ‘familiars’ in Macbeth) the hole in the sand as the cauldron and the witches as the casters. The witches sprinkle an herb like substance on the ingredients then cover them with sand and say a spell-like rhyme. They pour a vial of blood on the area then spit in a ritual.

This is also unmentioned in the play and may suggest the sealing of a charm. The witches are shown to speak as one, although one of them doesn’t seem to be able to talk and another doesn’t seem to be able to see. The witches then decide to meet once again and walk away. It is at this point that we realise that the dialogue from the play, Macbeth about the ‘familiars’ is omitted from the film.

As the witches walk it becomes more obvious that they are separating; the young witch trails along with the old, blind witch as the other old one begins to walk in a different direction. The witches appear to hover as their feet cannot be seen and there are no visible footsteps in the sand.

Polanski’s interpretation of Scene iii in Macbeth begins with weird noises and a close-up of Macbeth as he watches traitors of the King being hanged on the gallows in the background. This is closely linked with the witches’ hangman’s noose in Scene i, and also the weird noises as the witches enter. This could symbolise that the charm that the witches had cast earlier is affecting Macbeth.

Afterwards, we see a wide-angled shot of a craggy rock formation, which may be used to represent the evil and twisted nature of events to come. Furthermore, Macbeth and Banquo are shown to be shrouded in heavy fog, which corresponds with Shakespeare’s version, as the witches say, “hover through the fog and filthy air.” These diverse weather conditions once again create a sense of evil.

As Macbeth quotes his first words, “So fair and foul a day I have not see,” we see a long shot of the soldiers marching back from battle. This may be to show the contrast of the foul and fair of the day, the foul being the weather and the fair being the victory at the battle.

As the image returns to Macbeth and Banquo, we see that their horses are suddenly spooked. This precedes the entry of the witches and makes it obvious that Polanski wants to give the impression that nature can sense evil. As the witches appear, we can see their ragged clothes and the deformed appearance of one. Banquo sees that Macbeth is taken aback by the witches as they greet him as Thane of Cawdor, Thane of Glamis and soon to be King. Banquo mocks the witches, and treats them as they are talking nonsense and are rambling. It seems as if Banquo is trying to snap Macbeth out of his trance and make him see reason. However, Macbeth remains ‘rapt’ as the witches confuse him with riddles.

The witches then run into a cave-like shelter and close the door, so that the inside cannot be seen. This suggests that Polanski is concentrating a sense of mystery rather than a supernatural activity, as it keeps the audience asking questions such as, “What’s behind that door?” “Where are they going?” and “What are they going to do?” Macbeth is still in a trance of deep thinking as Banquo jokes about the witches vanishing, but soon openly shows his thoughts as he says “Your children shall be kings.” This makes it evident that Macbeth is contemplating his competition for king as we can see an expression of curiosity on his face. As Macbeth and Banquo leave, they laugh with a ghoulish echo, which could be a sign that their confrontation with the witches will come back to haunt them.

The next shot shows Macbeth’s tent on a beach. This beach links all of the preceding events as the battle took place on it, and the witches cast a spell there. This is to emphasise the witches’ foresight and knowledge of all things. We see Macbeth lying inside his tent, staring straight ahead as voiceovers represent his thoughts. This is an effective method as it shows is how engrossed Macbeth is. Shortly after, Rosse and Angus ride up to Macbeth’s camp to present him with the medallion of the Thane of Cawdor.

In conclusion, Roman Polanski may have used his own interpretation of Shakespeare’s play in his film, adding props such as a severed forearm and a seagull, but the original plot and storyline is still heavily involved in this film production. Polanski effectively uses voiceovers to represent characters’ thoughts and plans. He also makes it easier for people who may not understand Macbeth or other Shakespeare plays to understand the storyline. For example, he uses a seagull to represent the ‘familiars’ and links the storyline well.

Roman Polanski's Presentation of the Witches in Act 1, Scene I and III of Macbeth. (2020, Jun 02). Retrieved from http://studymoose.com/roman-polanskis-presentation-witches-act-1-scene-iii-macbeth-new-essay 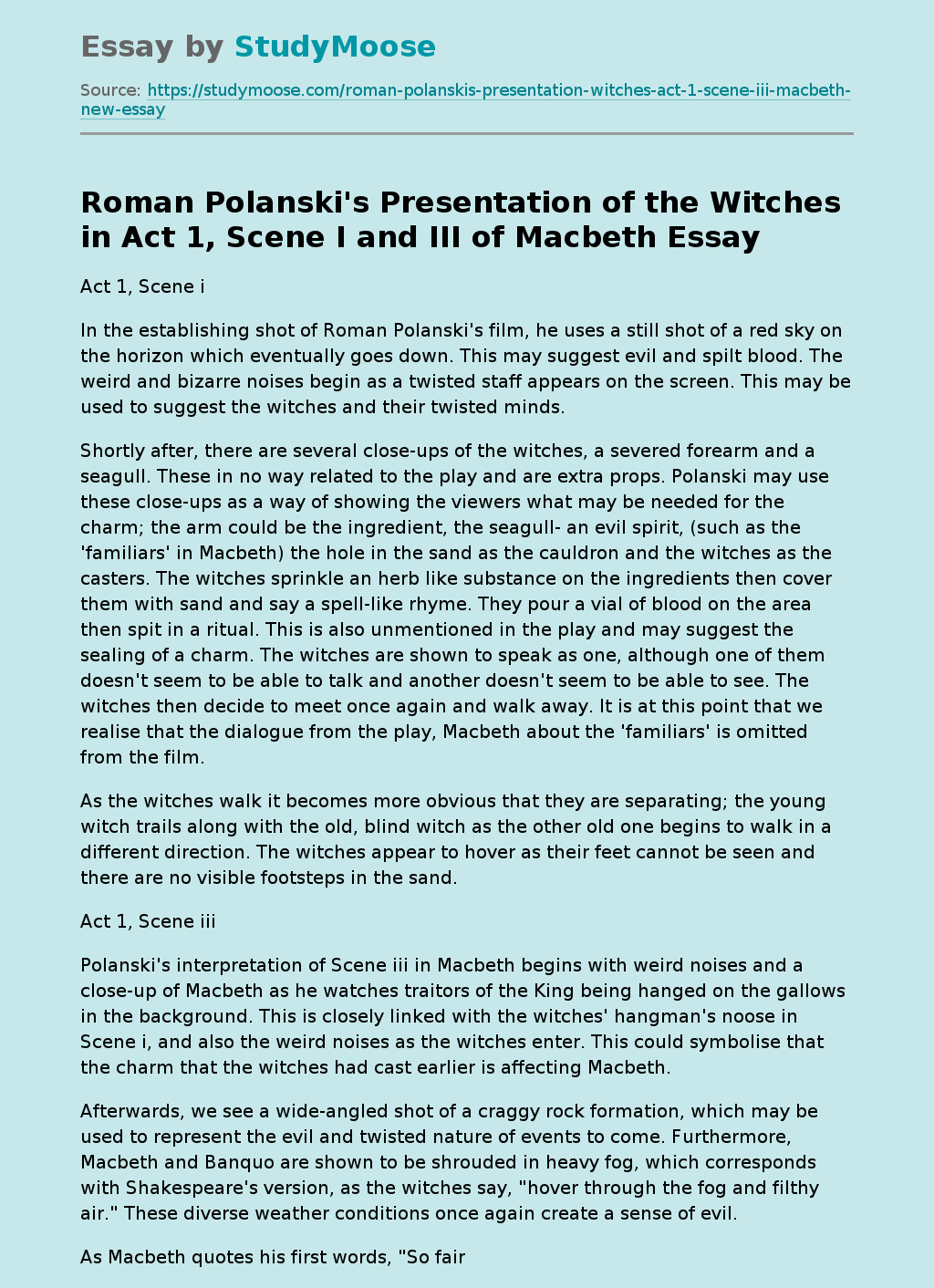