On first viewing both Polanski’s and Welles’ opening sequence of Macbeth you will immediately think them to be very different. However as we analyse them you will notice the similarities. Both openings occur before the credits and even though they are from different times they both include Shakespearean text.

Both films reflect on their era accordingly: Welles’ version, which was made in 1948, is in black and white and relies heavily on music. This is needed to liven the atmosphere when the film got more exciting or to give out eerie, sombre music when the film makers wanted the audience to be anxious or scared.

Don't use plagiarized sources. Get your custom essay on
“ Discuss the openings scenes of the Polanski and Welles’ film versions of “Macbeth” ”
Get custom paper
NEW! smart matching with writer

Welles’ dramatic crescendo at the end is typical of its time.

Polanski’s version has hardly any music at all and because it has colour technology it can rely on the warm, glowing orange of the sunset or the gloomy grey, blue of an isolated beach to set its atmosphere. Consequently the opening lacks the intensity of Welles’ version.

In Orson Welles’ adaptation of Macbeth the atmosphere is set straight away by a menacing looking cloudscape. The cloudscape then changes to a landscape view. It illustrates a dead tree (which carries on from the dead/hell theme) and a large rock. On the large rock there is a silhouette of three withes grouped round a cauldron. Directly behind them is a bright light on a dark background: this is so you focus on the withes. The lighting in this scene is misty, making the place seem like a surreal underworld where your nightmares take place; also the sombre music adds to this.

It makes the viewer feel anxious. The dark silhouette of the witches is on a light background. This attracts the viewer’s attention.

In the cauldron section the camera angle is pointed down to show what exactly is in the cauldron; as if we are looking into it. The liquid looks thick, like tar or porridge and it bubbles, it is accompanied by a steady, thudding sound, like a heart beat. After this, the liquid gives a sharp hissing sound and white smoke drifts out of the fluid to diffuse into the air. Following this, blinding, white flames appear on the dark liquid as the hissing noise dies down to be replaced by the sizzling simmering sound. All these different audio and visual effects give the viewer a lot to think about in quick succession causing them to feel dizzy and worried. The camera angle helps to make us feel drawn in.

When the witches pull out a clay lump and scratch at it to form the clay model a series of loud, high pitched, screeching sounds are used. This puts the audience on edge. After this one witch holds up the model and says ‘Here to meet with…’ Then there is a long pause as the camera focuses on the model’s head as the witch hauntingly says “Macbeth” which is then followed by swift, dramatic music. This makes the reader anxious to find out who he is. The overall effect of Welles’ opening sequence made me feel uncomfortable as well as excited.

Roman Polanski’s 1971 film uses fewer sound effects and music than Welles’ as it can rely on more sophisticated visual effects and lighting to set the atmosphere of the film.

The sombre, mystic atmosphere is set straight away in Polanski’s rework. The weird orange and russet red sunset, changes to a lighter tone of salmon pink then changes to a hue of greys and blues. It is a quiet atmosphere here which adds to the dreamlike, supernatural tone.

Next the sky scene then changes to landscape presenting drab, grey wet sand. Again there is little except for the mewing of seagulls and the slow tolling of bells which makes the place seem desolated and reminds us of a funeral. The landscape view of the beach is severed by a close up of a stick being plummeted into sand by the oldest witch. The light highlights the lightening shaped stick to arrest our attention. Then the camera then backs off to show all three witches, one by one. This made me anxious to find out what they could be doing on an isolated beach.

In the burial section the camera is beside the witches, forcing the audience to be drawn into the film as if they are there. As the witches walk away the camera backs off showing the witches walking off into the horizon again being silent. The overall opening of Polanski’s version of Macbeth made me anxious to know who these people were and if they were witches. It had a disconcerting effect on me.

In these two adaptations of Macbeth the representations of the witches are very different. In Orson Welles’ film the witches are traditional: with black capes and ugly faces. They are also grouped round a bubbling cauldron, whereas Polanski’s are depicted as individuals and outcasts.

All of Welles’ witches appear old whilst Polanski’s has an old one, middle aged one and a young one as if to represent three different generations and helping us believe that these women were real people instead of stereotypical witches. They seem to me as if they are outcasts from their society as they are dressed in dirty and ragged clothes and the youngest one appears to be dumb. It seems as if they are diseased or suffering and we can sympathise for them. Welles’ witches appear like they want to be on their own and they seem proud of their witchery.

Unlike Polanski’s they are not individual and except from their voices you can not tell the witches apart. Polanski’s, each have their own personage. His oldest witch seems to be the head of the group, for when they are digging she uses a stick whilst the other two claw at the sand with their nails and the camera angle makes her look taller than the other two. She also seems to have a close relationship with the youngest witch, because when they are walking off, the youngest one appears to be helping her whilst the middle aged witch is separate. This relationship helps to suggest that these women are just real people who enjoy witch craft.

Welles’ witches don’t seem to have a certain liaison because they all seem united. This has a lot to do with the fact that none of their personalities stand out so their feelings do not show.

The witches from Polanski’s variation give the film a sense of timelessness. The oldest witch is wearing a drab which was worn by medieval peasants and they are tugging along a trolley which is quite a modern object. This adds to the mystic tone that the opening sequence set for me.

Despite the difference in technique and presentation the structures to both Polanski’s and Welles’ opening sequence are very similar. The first thing you see on Polanski’s opening is a russet red sky. This soon changes to tones of grey and blue which seems to get more colourless as it goes along, whereas on Welles’ the first thing you see is a black and white image of the clouds. I imagine the colour of the sky to be tones of angry, pale orange and sharp, vibrant white light coming from behind each cloud; sort of how like how Hell is depicted. The camera angle is pointed up at an angle as if you are there. In both skyscapes the camera angle is at a distance and stays still throughout the intersection. After the scapes on both films the first thing you see is rather different. On Polanski’s version you see a crooked, gnarled stick whilst on Welles’ you see a landscape view of a close up of a dead tree and a rock with the witches on at a distance. That is a big difference in this film: Welles’ witches are traditional and use a caldron whereas in Polanski’s you can believe that the witches are real people as they are not stereotypical and are all quite different. There is an elderly witch, a middle aged one and a young one who appears to be dumb.

In Welles’ rework the witches use a cauldron to conduct their spell; Polanski’s do not, their ‘cauldron’ is represented by the hole they dig in which they bury two parcels, rosemary, a noose, a arm and a dagger then they recite a chant effortlessly, as if they have done it before whilst in Welles’ you see the witches take a hand holding a dagger out of the cauldron and when we were looking into the cauldron there was a white ghostlike shape which I believe to be a noose.

In both of the two films the witches chant. In Welles’ the three witches say the chant individually, saying a line each. None of there voices are recognisable and you can not match it to the witch. In Polanski’s the two witches (the old and middle aged one) say the chant together but it sounds as if they are muttering. The youngest witch looks like she is trying to get the words out but she can’t. This made me believe she is dumb. Both chants contain original Shakespearean text and in both films the witches spit in three directions.

Both films contain this extract from the original Macbeth by Shakespeare.

“Fair is foul, and foul is fair,

Hover through the fog and filthy air”

“When shall we three meet again?

In thunder, lightning, or in rain?”

When the battles lost, and won.”

“That will be ere the set of sun,”

“There to meet with……

I think Polanski’s opening suggests his film will have a sombre tone and it leaves the audience apprehensive to know who Macbeth is and what the witches have to do with him. If I did not know the story line of Macbeth I do not think I would have guessed that these three ladies were witches. I would have probably presumed them to be weird ladies who are outcast from their society.

In contrast Welles’ opening sets a fast paced, exciting tone for the film to come. It makes the audience believe that Macbeth is coutrelled by the witches’ evil.

Although I enjoyed both openings to the film, I would prefer to watch Welles’ 1948 film rather than Polanski’s version as I found it fast paced and exciting. Welles’ film left me anxious to know who Macbeth was and what these evil witches had to do with him; Polanski’s film left wondering more about the witches more than Macbeth himself.

Discuss the openings scenes of the Polanski and Welles' film versions of "Macbeth". (2020, Jun 01). Retrieved from https://studymoose.com/discuss-openings-scenes-polanski-welles-film-versions-macbeth-new-essay 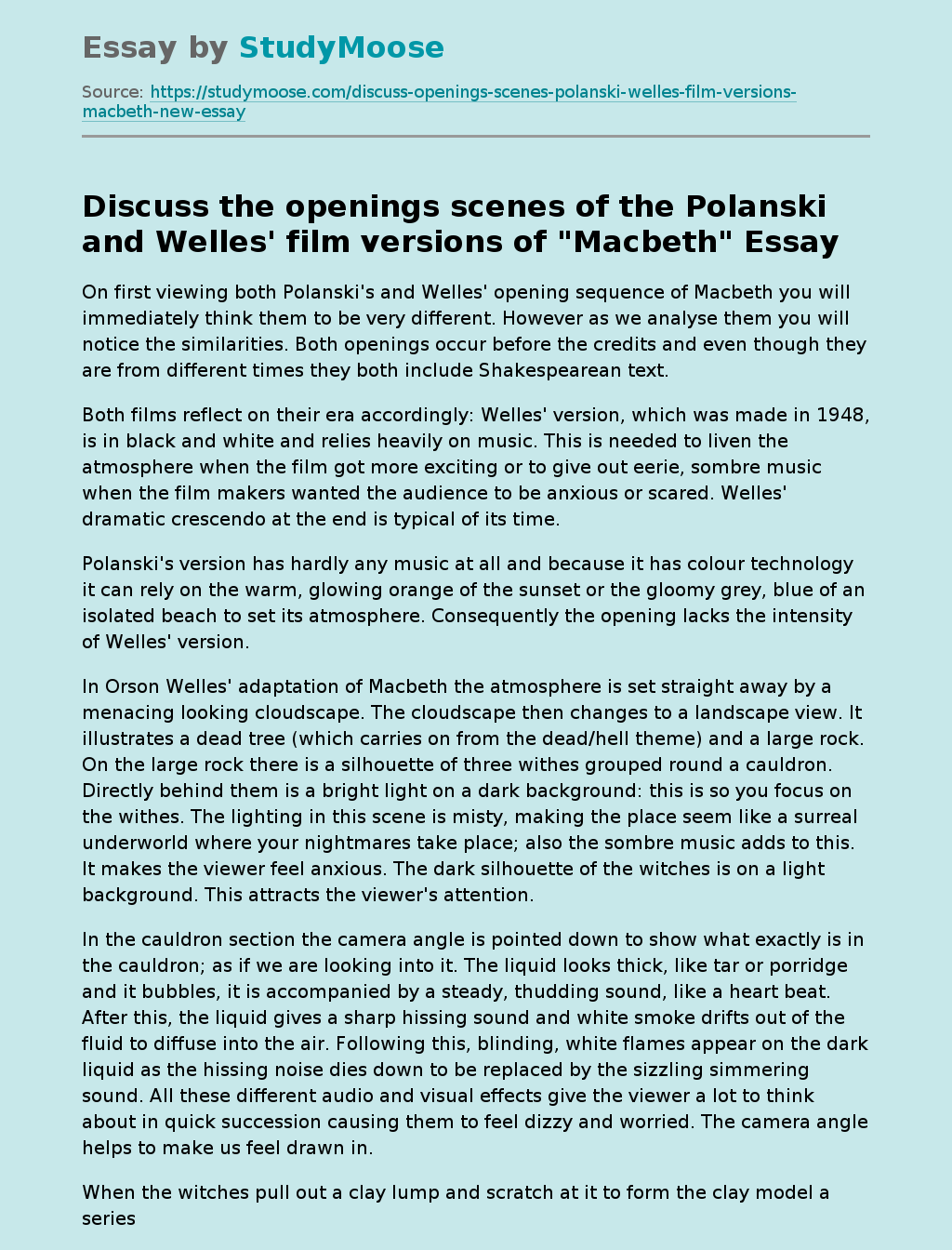