Compare the written text of act 1 scenes 1 and 3 of Shakespeare’s ‘Macbeth’ with Roman Polanski’s film version. Analyse and comment on the effect of the film techniques used, and their impact on audience, in the portrayal of the witches.

The witches are the first characters the audience meet at the beginning of ‘Macbeth’ in Act 1 scene 1 and they set the mood for the rest of the play. Today witches are seen as bizarre but when Shakespeare was writing his plays people were fascinated and frightened by them.

Don't use plagiarized sources. Get your custom essay on
“ Compare the written text of act 1 scenes 1 and 3 of Shakespeare’s ‘Macbeth’ with Roman Polanski’s film version ”
Get custom paper
NEW! smart matching with writer

During the reign of Elizabeth 1, hundreds of women, and some men, were convicted of witchcraft and executed. People were frightened of witches because they were believed to have amazing powers. They could curse entire communities, bringing disease and misfortune. They used evil spells and black magic. In ‘Macbeth’ the witches talk about their familiars:

In Elizabethan times familiars were believed to be demons obeying a witch.

Yet people were intrigued by witches as well. They performed strange rituals and spells. The powers they possessed were also alluring:

“Fair is foul, and foul is fair;

Hover through the fog and filthy air.”

The witches seem to be suggesting that white is black and black is white; they mix up good and evil. It suggests to the audience that the film is going to be about good and evil and that you sometimes can not tell the difference between the two.

Elizabethan directors would have interpreted Shakespeare’s text in a very literal way.

Together with the thunder and lighting of the Shakespeare text, the witches would have created quite a spectacle on the Elizabethan stage.

In act 1 scene 3 the witches are playing with the wind and controlling the entry of ships to certain ports. The witches seem not to have a great deal of power:

“Though his bark cannot be lost,

Yet it shall be tempest-tossed.”

The witches cannot sink the ‘bark’ or ship but they can create a storm causing inconvenience and frustration.

“So foul and fair a day I have not seen.”

Shakespeare could have made Macbeth say this to suggest that the witches have already in some way influenced Macbeth or it could be just a coincidence. It is ambiguous.

Shakespeare uses the idea that witches can see into the future:

“All hail Macbeth, hail to thee, Thane of Glamis!

All hail Macbeth, hail to thee, Thane of Cawdor!

All hail Macbeth, thou shalt be King hereafter!”

Macbeth is fascinated and tempted by the prospect of being Thane of Cawdor and also by the prospect of being the King of Scotland: this is alluring to him. The witches are aware of what is already pre-ordained for Macbeth. The witches in Shakespeare’s time were considered to be the products of hell, and that is why they meet Macbeth to let him be tempted by them. Macbeth is spoken of in act 1 scene 2 as “brave” and “noble”, but during act 1 scene 3 he does not appear to be. Macbeth is overwhelmed by this prophecy and it brings out the fatal flaw in his personality: ruthless ambition. Banquo’s personality, in contrast, is much more stable.

In Polanski’s film version of Macbeth, the references to familiars in act 1 scene 1 is omitted, and the whole section in act 1 scene 3 about making the wind blow in the wrong directions to prevent the ships reaching port is omitted. Some of this language in act 1 scene 3 is obscure and difficult to understand, and it could be that Polkanski does this to make the film more accessible to a modern audience. However, he could have left some of this language in if he thought that witchcraft was important in Macbeth. The witches in Polanski’s Macbeth are not dressed in stereotypical witches clothing; they are dressed in rags. Their meeting place is not the heath as referred to in the text, but a bleak beach. All these things distance Polanski’s witches from Shakespeare’s witches. Read compare and contrast Macbeth and Banquo analysis

In Polanski’s version of ‘Macbeth’ the witches seem to be sealing Macbeth’s fate from the start of the film. In act one scene one, the three witches appear on the beach and bury a knife, a severed arm, and a hangman’s noose in the sand. They then pour blood from a small bottle on to the sand where the items are buried. The knife symbolises the knife that Macbeth sees when he hallucinates later on in the play, just before he murders Duncan. The hangman’s noose symbolises Macbeth’s “hangman’s hands”. The arm represents Macbeth’s soul being condemned to hell. The blood seals Macbeth’s fate.

The purpose of the witches in Polanski’s version is different to Shakespeare’s. Polanski seems to manipulate the Elizabethan idea that witches were able to see into the future; instead they are capable of changing the future, and changing Macbeth’s personality. This is shown by the items buried in the sand.

In the opening of the film there is a beautiful sunrise against a beach. The colours are exquisite, relaxing, and serene. This changes dramatically and quickly in quite an unreal way to a dark, bleak beach. This creates a dark and eerie mood that sets the tone for the introduction of the witches.

The witches’ faces are shown to shock and surprise the audience. One is a young woman, one is an old woman, and one is an old blind woman. They all look ugly and lurid. When the witches chant:

‘Fair is foul, and foul is fair;

Hover through the fog and filthy air,” they chant in unison. This suggests to the audience that the witches are in harmony with one another and are telepathic in some way.

The location in the beginning of the film is desolate. It seems to have been chosen by Polanski to make the witches seem strange.

In the opening of the film there is no title theme. This makes the film stand out as being quite unusual. When the audience sees the witches on screen for the first time they are dramatic enough and therefore do not need an opening theme. The silence in itself is chilling.

In act 1 scene 3 the camera is always focused on Macbeth when neither he nor Banquo have any dialogue. This suggests very subtly to the audience early on that he is going to be the main character.

The music that is at the beginning of act 1 scene 3 is discordant. This prepares the audience for the predictions that the witches make. The music consists of a pedal base note that is often in musical terms called a drone. This creates an unsettled feeling for the scene that is effective. The clash of closely grouped notes that are mingled in with this drone is also effective and creates tension and unease.

The weather in act 1 scene 3 is dark, dank and miserable. This helps in creating the mood for what is about to happen. The expression on Macbeth’s face when the witches make the prediction is one of shock; by filming a Big Close Up the audience’s attention is focused on Macbeth’s reaction to the witches.

The symbolic items buried on the beach seem to suggest that the witches are controlling Macbeth’s future. However, act 1 scene 3 in the film is a more literal interpretation of Shakespeare’s work in that it focuses the audience’s attention on how Macbeth is influenced by the witches because of the flaws that exist in his personality. Polanski lets the audience decide whether the witches are there to tempt Macbeth, or whether they are in fact causing his personality to change.

Compare the written text of act 1 scenes 1 and 3 of Shakespeare's 'Macbeth' with Roman Polanski's film version. (2020, Jun 01). Retrieved from https://studymoose.com/compare-written-text-act-1-scenes-1-3-shakespeares-macbeth-roman-polanskis-film-version-new-essay 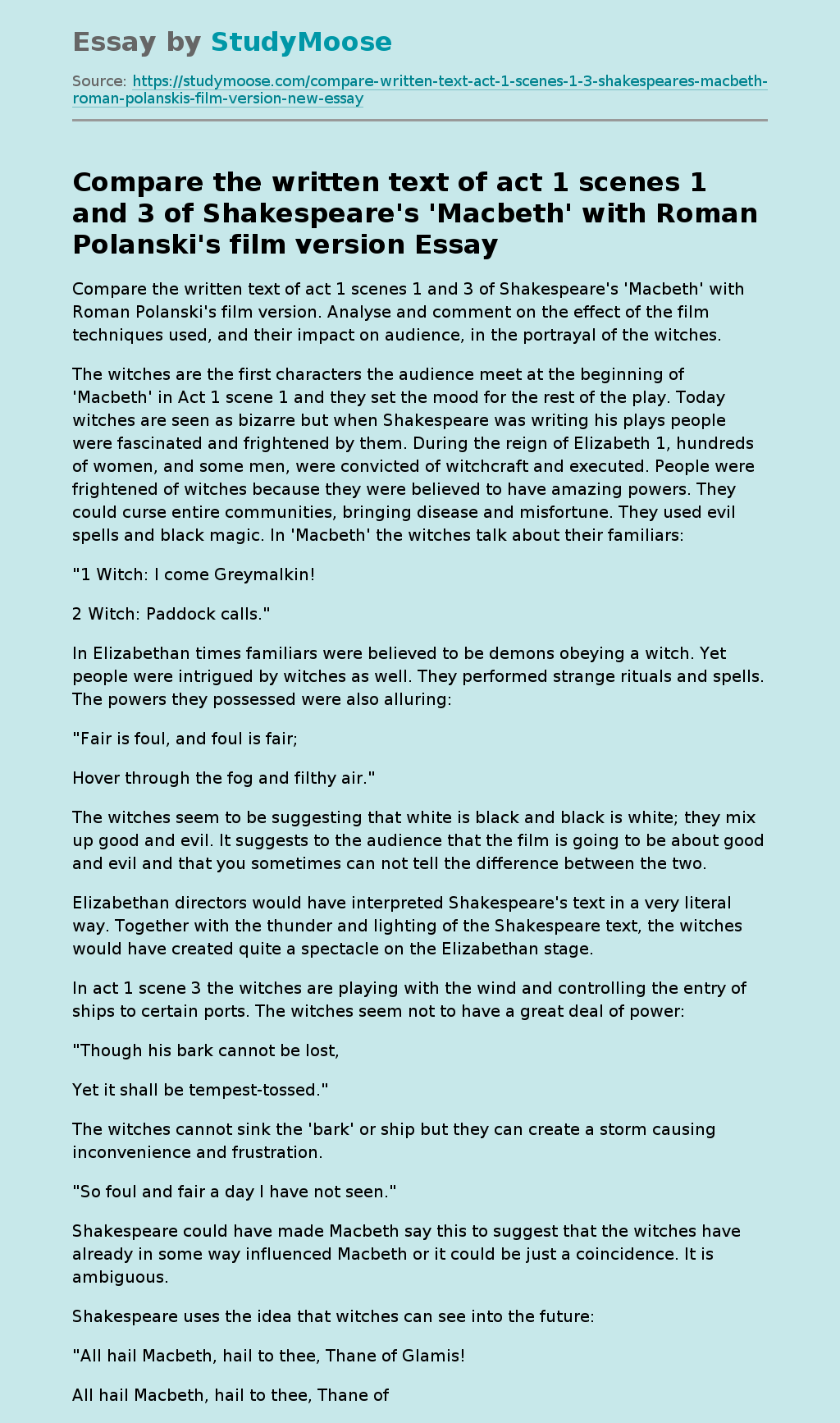