Roman Polanski’s Interpretation of Shakespeare’s Presentation of the witches in act 1 scene 1 and scene 3 of Macbeth by William Shakespeare.

In Shakespeare’s scene the witches are presented in an open place, this creates a sense of mystery as to why an open place was chosen and already the audience are beginning to ask questions about these witches. The thunder and lightning in the background adds to the tension that has already been built up by the witches.

Don't use plagiarized sources. Get your custom essay on
“ Roman Polanski’s Interpretation of Shakespeare’s Presentation of the witches in act 1 scene 1 and scene 3 of Macbeth by William Shakespeare ”
Get custom paper
NEW! smart matching with writer

I think that Shakespeare did this on purpose because when there was thunder and lightning it was associated with bad goings on.

In the first four lines of the play the witches are talking in rhymes, this adds to the incantatory effect that that the witches are casting a spell and that they are all over a cauldron or a fire of some sort. When thy ask when they shall meet again and they only mention bad weather as options e.

g. thunder, lightning or in rain (Act1, Sc,1,L1-2), this shows that they have the ability to control the weather and meet in any kind of weather that they want.

The next thing that the witches talk about is “when the hurly-burly’s done when the battle’s lost and won.” Now the audience begin to ask questions like what battle and who lost and who won. And again Shakespeare deliberately put this in to get the audience asking questions. When the witches start to make predictions about a battle, this shows the power that they have to predict the future and see how it will turn out.

“Fair is foul and foul is fair:” this refers to an in version of values, evil to them is good and good is evil. So the witches mission is to turn every-thing on it’s head and turn good to evil. This could also be the reason why they choose Macbeth because he was good and this was the start of their mission.

When they say “Fair if foul and foul is fair” the iambic pentameter is set in reverse mode, the inverted pattern of stressed and unstressed syllables reflects the inverted mission to perceive evil as good and good as evil. Finally in the last line of scene one, when they say “hover through the fog and filthy air” the word hover here suggests a sense of the supernatural and weird.

In Roman Polanski’s version of scene 1 he presents the witches in a different way than Shakespeare does. The first change that he has, is his opening shot. This is a shot of the beach at sunset and a red sky, this is a still shot picture, there is no thunder or lightning either in this opening shot. The red sky represents that there will be blood shed or that there has been blood shed.

Then it cross fades onto the same beach at dawn and it then focuses on a staff, the staff is bent and twisted this represents the witches twisted ways in which they are going to turn good evil. With the staff one of the witches draw a circle on the ground and they begin to dig a hole in the circle. In the hole they put a hangman’s noose, this represents the thane of Cawdor who hung himself. A severed forearm holding a dagger which represents that there might be a killing.

They then fill in the hole, pour some blood on it and then they all spit over the hole and the first words in the play are “fair is foul and foul is fair”. This is another change that Polanski made he put this at the start of the scene where as Shakespeare put it at the end of the scene. While they are doing this the camera is moving between them (panning). A seagull flies over them in the sky, this adds to the eeriness that has already been created and then a mist begins to fall.

When the witches begin to walk away weird noises begin this adds to the sense of eeriness that has already been created. One other thing that Polanski changes is that the witches have no beards and they have a cart with them, there was no mention of a cart in Shakespeare’s play. The young witch pulls the cart and the blind witch holds on to it and the other one walks on their own and they leave no tracks behind. The camera then goes into like a windscreen and to black lines appear one from the top and one from the bottom.

In scene three this is the second encounter with the witches for the audience but not for Macbeth. The three witches enter on a heath this is specific because it is possibly an eerie or isolated place. Again at the start of this scene there is thunder so bad weather must be in some way connected with witch craft of some sort. In the second line when the witch says “killing swine” this confirmed for the contemporary audience that they in fact witches and they practiced evil.

When one of the witches met a woman with chestnuts on her lap and the witch asked for some, when the woman would not give him any the witch sent a storm out to sea to kill the woman’s husband. This shows that the witches are fickle and disproportionate in their reactions to this event.

When Macbeth and Banquo enter Macbeth’s first words suggest that he is already wound up by the spell or charm because he say’s “So foul and fair a day I have not seen.” When Banquo sees the witches he begins to ridicule them by saying “That look not like th’inhabitants o’ the earth.” They begin to make predictions about Macbeth by saying “All hail, to thee, Thane of Cawdor” and “All hail, that shalt be king here after” Banquo notices Macbeth who seems therefore to start and seem to fear, because he knows that some thing bad will have to come out of him becoming king. Then Banquo begins to ask the witches about his future and they talk in rhymes to him by saying “Lesser than Macbeth, and greater” and then “Not so happy, yet much happier.” The predictions that they make to Banquo is “Thou shalt get kings , though thou be none.” When Macbeth says “Stay you imperfect speakers.” This indicates that they are vanishing and that Macbeth’s ambition is beginning to grow.

In Roman Polanski’s interpretation of scene 3 it opens with Macbeth watching people being hanged on the gallows. These people were traitors to the King and this refers back to the hangman’s noose that was buried in scene 1 by the witches, Polanski keeps on referring back to what has already happened in the play.

When Macbeth and Banquo ride off into the mist and find shelter under a rock Macbeth’s first words show that the charm has been wound up “so foul and fair a day I have not seen”.

By this stage Polanski has cut about thirty to thirty-five lines out of the original text. He left out about the witches building up the charm and the woman with the chestnuts. This indicates that Polanski is concentrating on creating a sense of mystery rather than a sense of the supernatural.

When the witches begin to chant and sing Macbeth and Banquo’s horses are startled and Macbeth and Banquo go around to investigate. When Banquo gives his speech about what they look like they then turn their attention to Macbeth and give their predictions about him being Thane of Glamis, Thane of Cawdor and shalt be king here after. When they say this there is a long silence and eventually Banquo breaks the ice and he asks about him because Macbeth looks to be wrapped with awe, and when he does so the witches begin to speak in riddles to him “lesser than Macbeth yet much greater” and “not so happy yet much happier”.

When the witches finish talking it was as if they had him in the trance until they were finished with Banquo, Macbeth went after them as they went to walk away and asked them to stay because he wanted to know more about these predictions. As the witches run off past a door Banquo cracks a joke and says that they vanished. When they ride off Macbeth says that Banquo’s children shall be kings and Banquo say that Macbeth shall be king and they bother laugh in a ghoulish way.

The next shot opens with Macbeth lying in his tent and Polanski uses a voice over here when Rosse comes riding up to the camp with the medallion for Macbeth to become Thane of Cawdor, when Macbeth hears about this he looks at Banquo and Banquo says “may the devil speak true” and it’s from here on in that Macbeth really begins to think about the witches prophecies. When he renters his tent Polanski uses a voice over here again and Macbeth is thinking really hard about what has just happened and when he exit’s the tent again he seems to be more forceful and arrogant.

Roman Polanski's Interpretation of Shakespeare's Presentation of the witches in act 1 scene 1 and scene 3 of Macbeth by William Shakespeare. (2020, Jun 02). Retrieved from https://studymoose.com/roman-polanskis-interpretation-shakespeares-presentation-witches-act-1-scene-1-scene-3-macbeth-william-shakespeare-new-essay 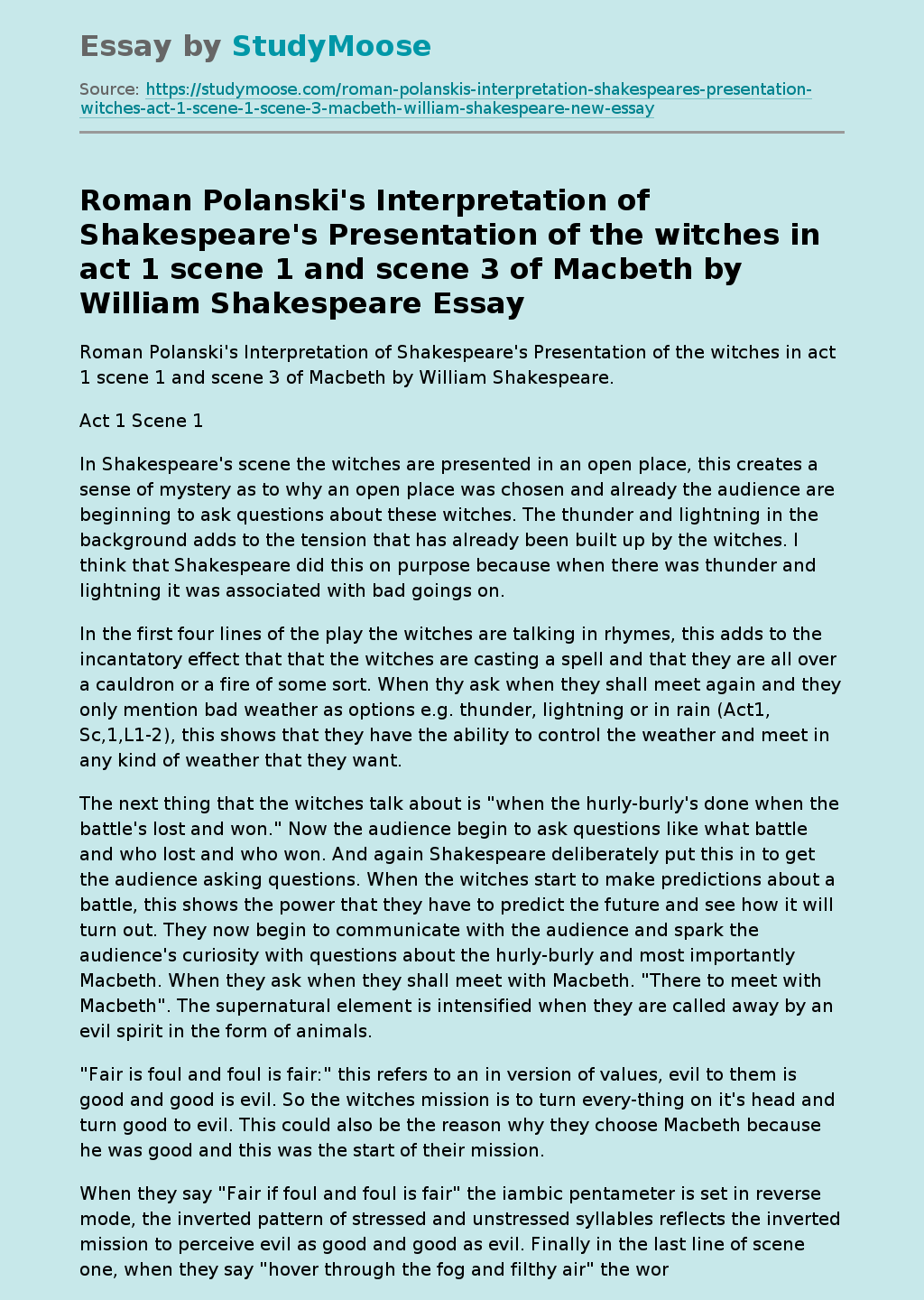