The role and presentation of the witches in Macbeth

Analyse the role and presentation of the witches in Macbeth with reference to Shakespeare’s use of language, his historical and contemporary influences and the themes addressed by the play.

In this essay I will look at the way in which Shakespeare presents the witches to us in Macbeth and the role they play. However, before looking at them I believe a brief look at the background to the play would be beneficial in order to help understand the way in which they were presented in context with Jacobean times.

Don't use plagiarized sources. Get your custom essay on
“ The role and presentation of the witches in Macbeth ”
Get custom paper
NEW! smart matching with writer

Macbeth was written by Shakespeare sometime between 1603 and 1606; James the First was king at that time having succeeded the throne in 1603. Shortly after becoming king, James the First took Shakespeare and his company under his personal patronage and renamed those “The King’s Men”. James the First, both before and after his ascension to the throne had encountered acts of treason against him. The most famous of which was the gunpowder plot of 1605.

King James and the political climate of the time seem to have been a big influence on Shakespeare.

Macbeth may have even been written directly for James the First and the fact that several of the major characters in the play such as Banquo and Duncan are based on relatives of the king lends credence to this. It is also likely that Shakespeare saw in the public at large the interest created by these plots against James the First and the ensuing trials that took place. James the First was a strict protestant and a firm believer in the supernatural which was common during this period.

He strongly believed in witchcraft and wrote a book titled daemonology in which he associated the powers of witches and their magic with that of the devil. The majority of the audience at the time the play was conceived also shared this belief of witchcraft and it being evil which contrasts with audiences of Macbeth today. Women’s accepted roles during this time were also vastly different from today. Strong, dominant female characters were not accepted by society and viewed as unnatural by the majority and most likely even Shakespeare himself.

It is this supernaturalism which was very topical of the time that is one of the key themes of Macbeth along with ambition. There are many underlying themes in Macbeth such as, good vs. evil, love, deception and loyalty. However the supernatural can be linked to all of these themes and is used with great effect by Shakespeare to explore and draw out the evilness and corruption in man. As soon as the opening of the play is viewed in which the witches make their first appearance, Shakespeare leaves the audience in no doubt as to the nature of the three witches and the dark tone of what lies ahead.

The opening in act I scene 1 with thunder and lightning followed by the witches proclaiming at the end of the first couplet that “Fair is foul and foul is fair” informs the audience immediately that these three creatures are somehow ‘unnatural’ and go against Gods order of there being distinction between good and evil. This supernatural theme linked with evilness continues throughout the play and is used in many instances to drive the story of Macbeth forwards. From the prophecies the witches make in act I scene 3 which influence and court Macbeth’s interest, to the dagger which is seen to lead Macbeth on in act II scene 1.

It can be said then that the role of the witches with regards to the message of the play is to be the face of evil, the instigators of corruption in men. Lady Macbeth is also linked to the witches in that her character is an unnaturally strong female who also tries to corrupt Macbeth. However Shakespeare shows the audience early on that the witches have a limit to their power, they can shape shift but not perfectly “And like a rat without a tail,” act I scene 3. Macbeth never loses his free will due to being possessed by some sort of evil devil or great magic and it is ultimately his own ambition which causes his downfall.

The way in which the witches are presented to us in the first act is rather ambiguous and can be interpretated in different ways. It’s unclear to us whether these creatures are even human, shown by Banquo’s comment that “That look not like th’ inhabitants o’ th’ earth,” in act I scene 3. Again it seems that Shakespeare wants us to be sure that the three witches are somehow unnatural. In the many different productions of Shakespeare over the years the interpretation of how to present the witches to the audience has varied.

A play watched by myself recently showed the witches to be Mediums, speaking in unison, communicating and receiving instructions from elsewhere which were passed onto Macbeth. This is a more modern view perhaps of the supernatural and while sticking to the original theme, contrasts quite sharply with the image film director Polanski presents us with in his film adaptation. In which we are presented with a more classical view of the three witches yet still different from Shakespeare’s original vision. One who is blind, the other deaf and the last dumb. Even so, the underlying theme of the supernatural and evil tends to remain in different productions, though the witches may be presented to us in different ways.

The language used by Shakespeare to present the witches to us is also important. Most of the play is written in blank verse with the majority of the characters using this free form poetry. Prose is used in several scenes, for example the letter to Lady Macbeth in act I scene 5. Prose is also used by the porter in act II scene 3 and this shows a distinction by Shakespeare between characters of a lower social standing and those nobler ones who speak with blank verse. Lady Macbeth also starts to speak in prose after her breakdown as she finds herself unable to cope with the guilt of her actions. The witches however speak not in blank verse or prose, they use verse couplets, below is an example.

1 WITCH. “Round about the cauldron go.

In the poison’d entrails throw.

Toad that under cold stone

Days and nights has thirty-one

ALL. “Double, double toil and trouble;

This style of writing seems very appropriate for the witches; the rhyming style conjures up images of spells and incantations being chanted. I feel this adds greatly to the atmosphere Shakespeare wants us to feel in the scenes which include the witches, again all playing a part to make us feel that the witches are somehow scary, sinister and supernatural. Coupled with this, Shakespeare uses repetition of words to bring home to the audience the meaning of the play. One of the more striking examples is fair and foul which are the first words Macbeth speaks and also spoken by the witches during the same act.

The structure of the play encompasses the five traditional acts which are then subdivided into scenes. The play however is split into two parts. In the first half of the story we witness Macbeths rise to become king. The second half of the story we witness his efforts to deal with the consequences of his actions, his fall from grace and ultimate demise. The structure as such follows the formula of crime and consequence and again Shakespeare has paid special attention to the witches and their effect on the structure of the play. The witches in a sense introduce each half of the play. They set the tone and atmosphere of the play in the beginning, setting up the crime with their first set of prophecies to Macbeth. Then, at the half way point when Macbeth sees Banquos ghost in act III and visits the Witches for affirmation, they set the seeds of consequence to the audience with the second set of prophecies.

In conclusion, the witches, even though they appear in just a few scenes, are central to setting the tone of the play. Right from the get go the characters help set a dark, foreboding atmosphere which might not exist without them. Even so, in the scenes which include supernatural hallucinations such as Banquos ghost in act III scene 4, it is unclear whether or not the characters affected are really under a spell or have encountered some sort of psychological breakdown. It is possible Shakespeare had knowledge ahead of his time about human psychology yet thought that his audience would still need strong, evil characters that they could easily identify with and thus created the witches to fit that archetype.

An audience of today could sit and accept that not everything is black and white, good and evil. I believe that it would not have been the case in the 1600’s. Still, I am of the opinion that the role the witches have to play is pivotal even in context with today. Without them and the questions they raise through their prophecies in the play, it would not have had the same dramatical impact which has endured over time and inspired countless works even though the audience has changed over the years and in the main no longer believes in witchcraft.

The role and presentation of the witches in Macbeth. (2017, Oct 21). Retrieved from http://studymoose.com/the-role-and-presentation-of-the-witches-in-macbeth-essay 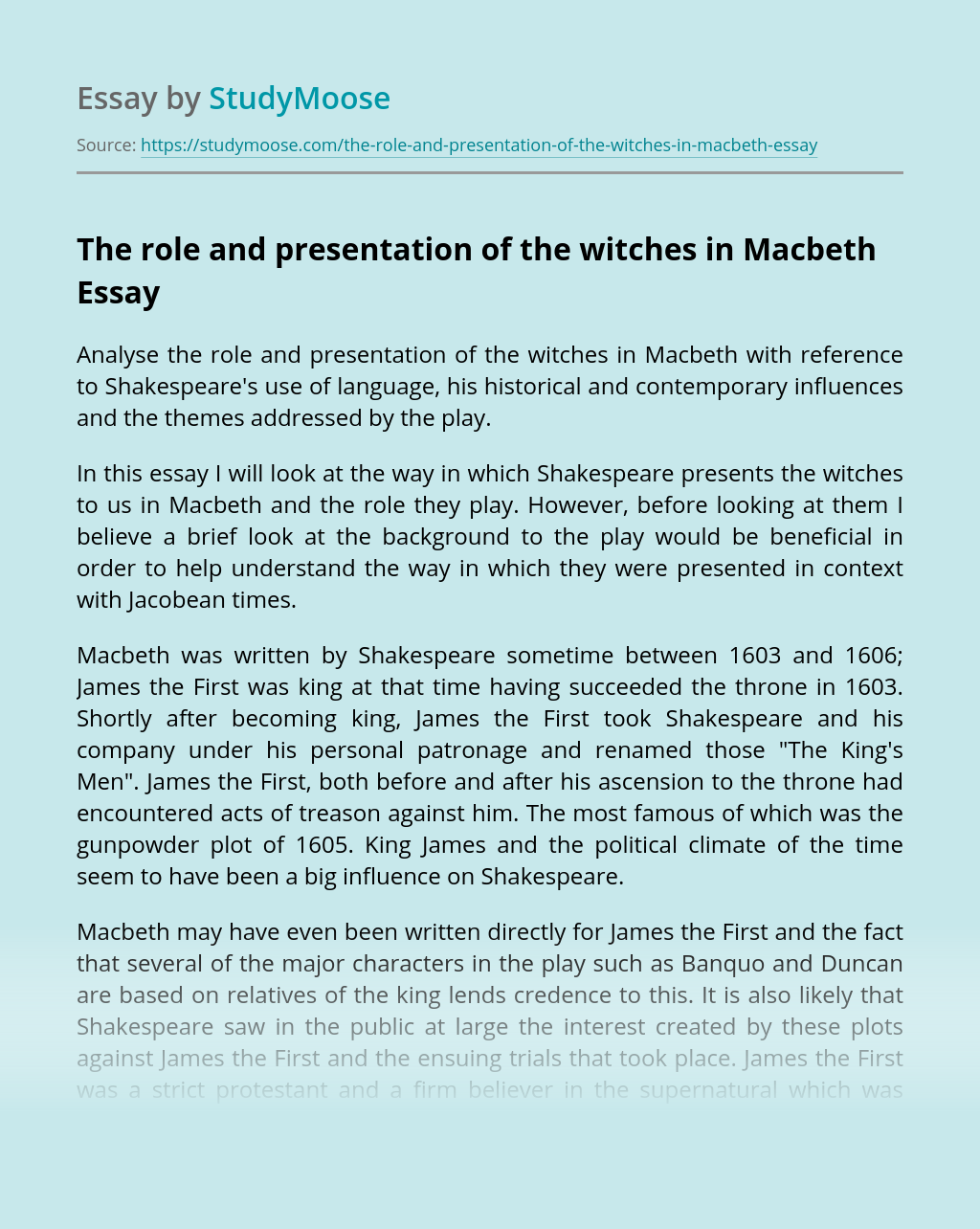